A day at The Lizard

I met David Pearman, Ian Bennallick, and Colin French for a day on The Lizard.  David wanted to visit all the locations for Dwarf Rush Juncus capitatus and the rare clovers, and I was happy to help out.  I had been to The Lizard once before, in August, when Cornish Heath Erica vagans was looking good but it was too late to see the spring plants.
﻿﻿﻿﻿﻿﻿﻿﻿﻿﻿﻿﻿﻿﻿﻿﻿﻿ 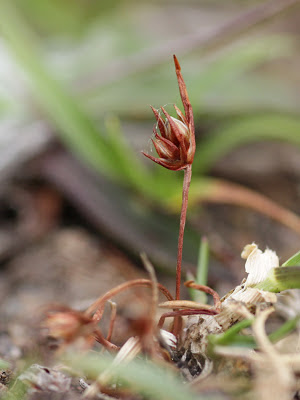 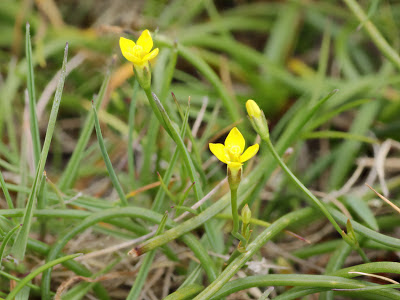 David told me that I would be able to recognise Dwarf Rush because it is rich chestnut brown and has a long jaunty bract.  I pointed at a tiny rush growing in a small open patch on the rocky heath: 'Like this one?'  I like small plants, and Dwarf Rush is tiny.  It is the rarest member of a community of little plants that grow in places where winter water and summer drought keep more vigorous species at bay.  Yellow Centaury Cicendia filiformis is another member of this community.  It is not as rare as the rush, but I had never before seen it in full flower.  Usually I am too early or too late in the day or it is cloudy and the petals are all closed up, making the plant look like a yellow-tipped matchstick, but today the conditions were just right for this Goldilocks flower.

There was no chance of flowers on one of other rarities here.  Land Quillwort Isoetes histrix is a fern-like plant.  I often find quillworts on the bottom of lochs, but this one grows on dry land, or rather on land that is dry in the summer.  The stomata form two pairs of lines of white dots that run along the leaves, which is a useful feature to distinguish the quillwort from other rosettes, like the squills Scilla. 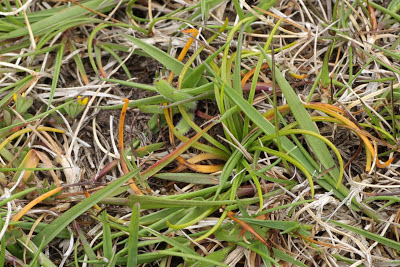 After we had looked at the Dwarf Rush sites, we walked down towards the west side of Kynance Cove stopping to check for clovers on the rock outcrops.  There was plenty of Knotted Clover Trifolium striatum and some Rough Clover Trifolium scabrum here, and Lizard specialties like Thyme Broomrape Orobanche alba, Hairy Greenweed Genista pilosa, and Golden Hair Lichen Teloschistes flavicans, but it was not until Ian called out from half way down a steep slope that we found our first rare clover, Twin-headed Clover Trifolium bocconei. 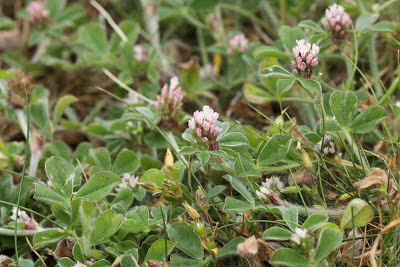 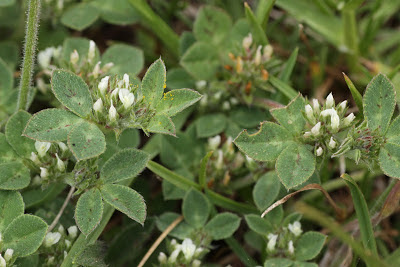 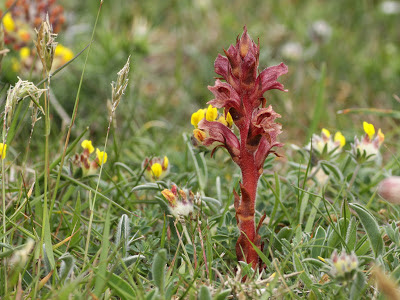 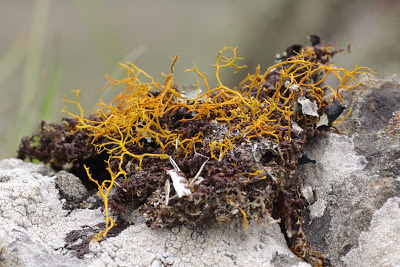 Twin-headed Clover Trifolium bocconei is the rarest of the Lizard clovers.  Many of the plants had twin flower heads, but those with only one head differed from other small clovers by their long, grey leaflets, which were less hairy above. 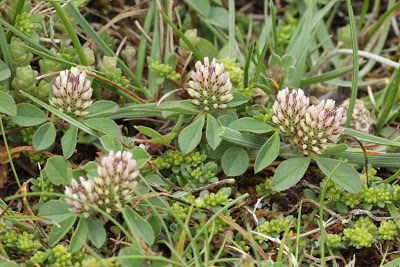 Later we headed across fields with more Land Quillwort towards Carn Caerthillian, the clover hotspot of all England.  North of the valley we visited a small mound where there was a good population of Twin-headed Clover, more Dwarf Rush, Chives Allium schoenoprasum, and a few withered plants of Upright Chickweed Moenchia erecta.  Near here we found our first Upright Clover Trifolium strictum. 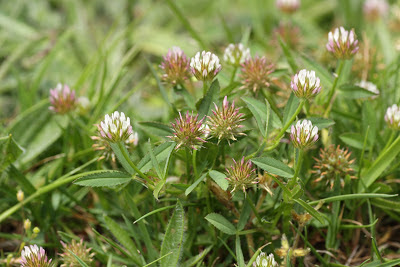 This is a spiky little clover, very distinctive with its long leaflets and large stipules, both with saw-toothed edges, and with long-stalked flower-heads.  On the coast path to Caerthillian Cove we found the last of the rare Lizard clovers, Long-headed Clover Trifolium incarnatum subsp molinerii.  If Upright Clover is a spiky plant, Long-headed Clover is a soft, furry one. 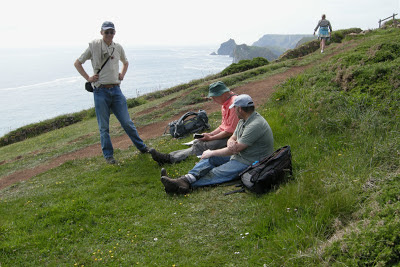 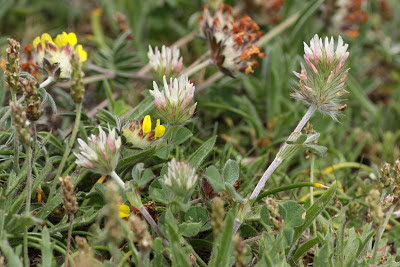 When we reached Caerthillian valley we found legumes in abundance on some of slopes.  More Twin-headed and Upright Clovers, and Hairy Bird's-foot-trefoil Lotus subbiflorus.
Posted by Mark Gurney at 20:00