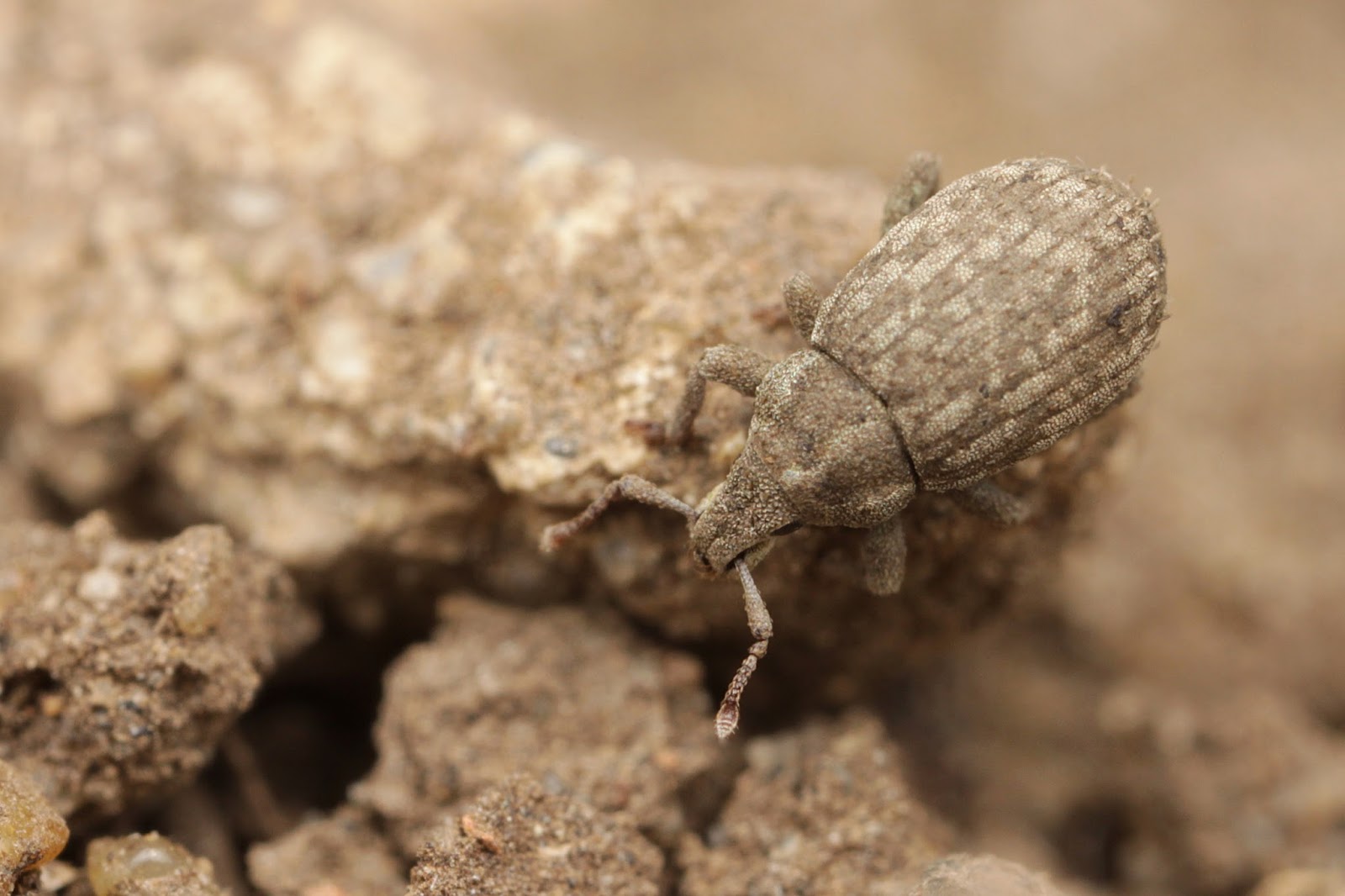 The Trachyphloeine weevils are strange but endearing animals.  The one I find most often, enough for me to call it common, is Trachyphloeus angustisetulus, and yet this species was first found here as recently as the early 1990s.  It has a doppleganger in Trachyphloeus bifoveolatus, from which it was separated in 1915.  The differences between the two are subtle and variable, so much so that fifty years after he had described angustisetulus as a species, Victor Hansen decided that it was only a variety of bifoveolatus.  In Britain, any big fat Trachyphloeus was still being called bifoveolatus, so none of this mattered much until 1991 when a team from Aarhus Univeristy found that allozymes and measurements offered strong support for separating the two, and that both species were British.  Equipped with new and more reliable ways to tell the two apart, British entomologists looked at old specimens and found that angustisetulus was much the commoner species here, even though it had been recorded under the name bifoveolatus (or scaber just to add to the confusion) until now.  As a result, any mention of bifoveolatus from before 1990 could refer to either species; caution is required.

That is the past.  We are now left with two species, but how do you tell them apart?  The real bifoveolatus (on the right) is usually not so fat, and it has slightly longer and less rounded eyes. 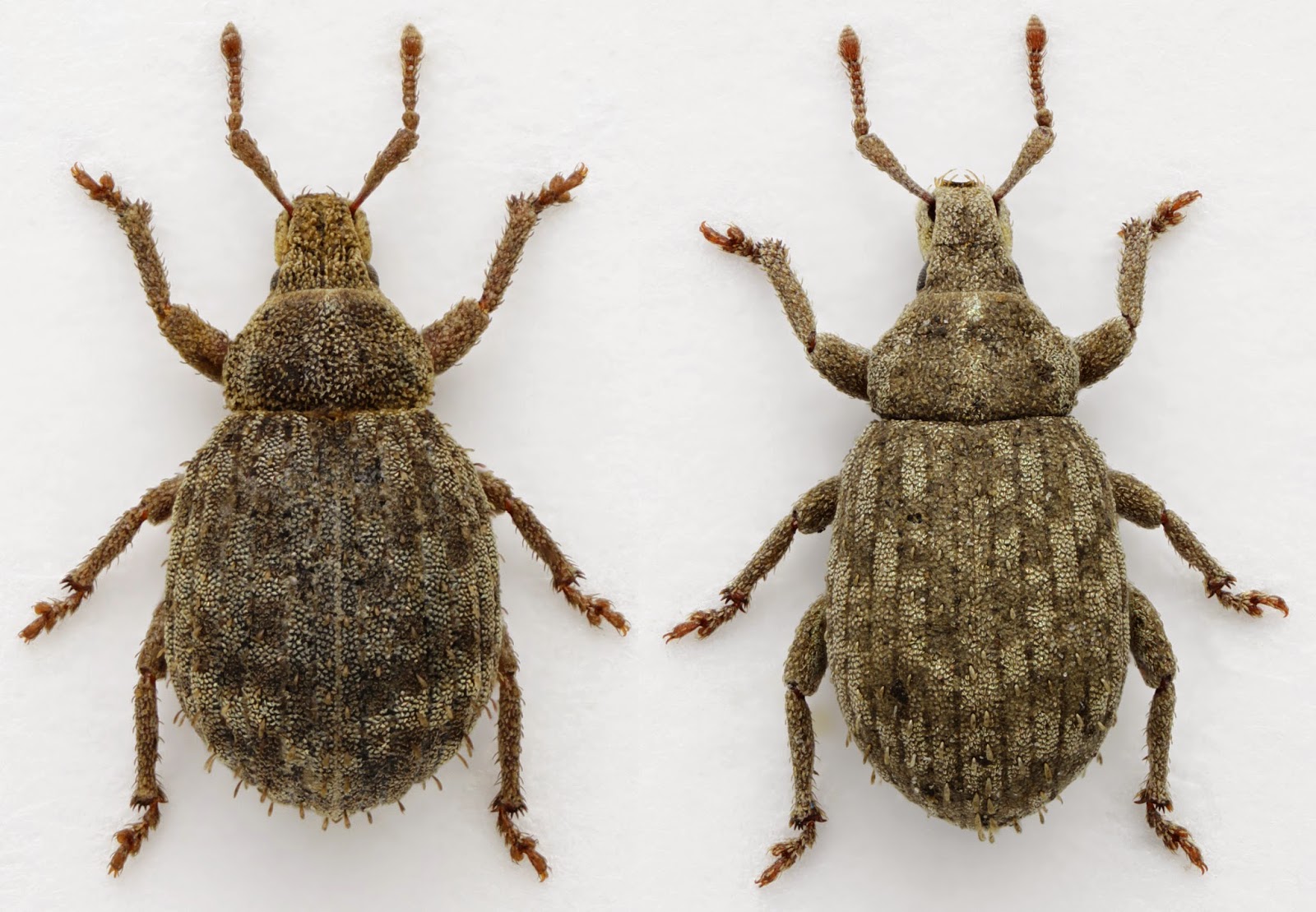 In case you are not convinced, here is a composite image with bifoveolatus on the right: the wing-cases are narrower, and they are not so swollen at the sides, especially just behind the shoulders, and the eyes are a little flatter.  The difference is apparent in the field. 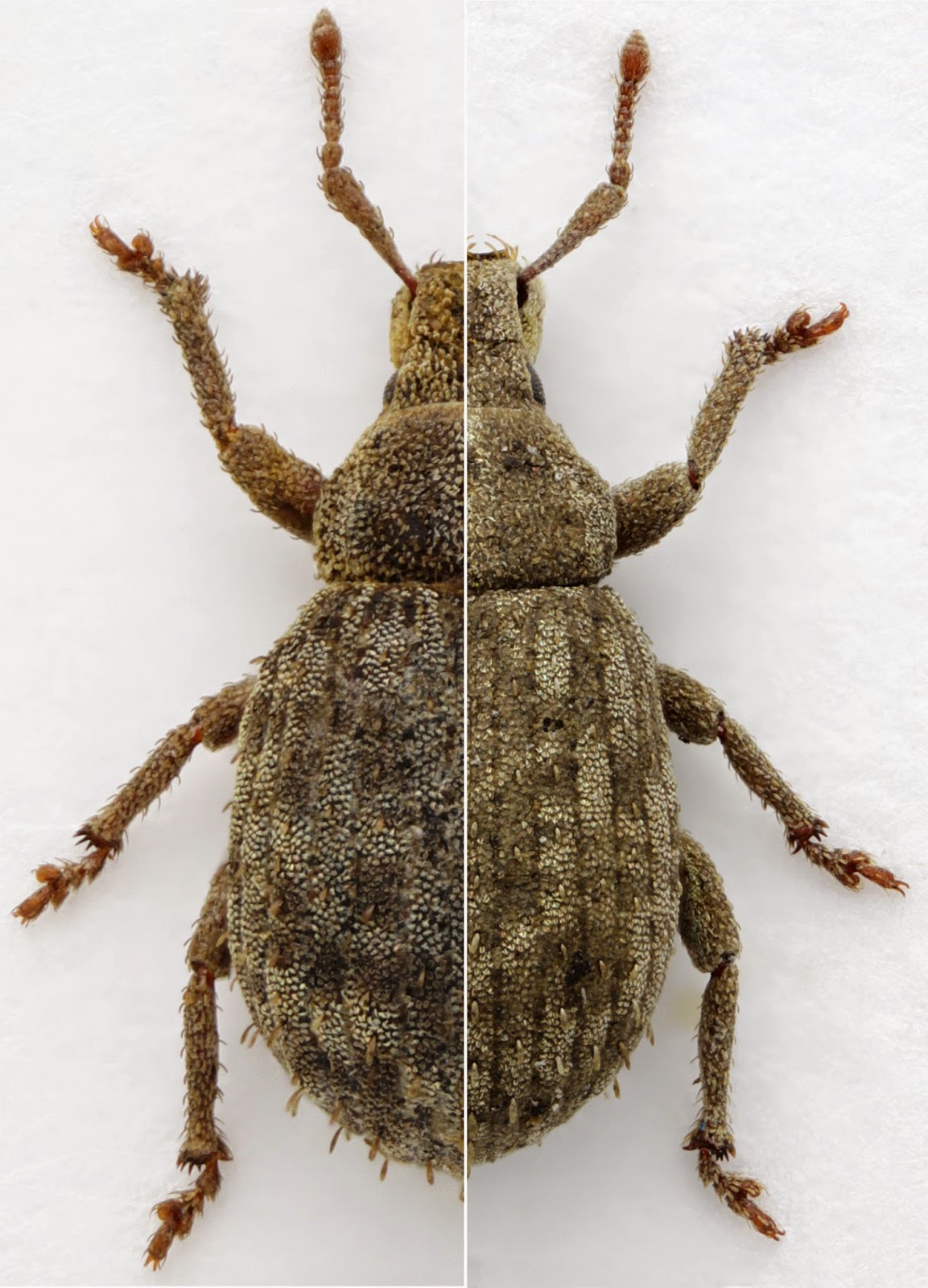 I said that bifoveolatus is usually narrower than angustisetulus.  The narrowest angustisetulus are as wide as the broadest bifoveolatus, but the area of overlap is small.  Things seem to get a bit more blurred in Central Europe, where people have had the most trouble separating the two.  Peter Stüben argues that the shape of the spermatheca (one of the female reproductive bits) is the only way to be sure.

You can measure the difference in shape if you divide the width of the pronotum (P) by the width of the wing-cases (W).  The Aarhus team measured the mean and standard deviation of W/P in the two species: 1.427 (sd = 0.043) for bifoveolatus; 1.628 (sd= 0.053) for angustisetulus, so we can plot frequency distribution of the two.  I have added W/P from my specimens and from some photographs (1-10).  Specimen 1 is the bifoveolatus I found on Sunday; 2 is from a photograph of another weevil from the same site.  3-10 are specimens from various places.  I am happy to call 1 and 2 bifoveolatus: their wing-cases are narrowed to the base, they have flat eyes, and the spermatheca of 1 matches the pictures in Peter Stüben's article.  I am also happy to call 3-10 angustisetulus because they have very rounded wing-cases, broad, rounded shoulders, and rounder eyes.

As a final note, I should add that the latest British checklist includes these Trachyphloeus species as Romualdius angustisetulus and Romualdius bifoveolatus.  The genus Romualdius was created in 2009, and it incorporates two things I dislike: nomenclatural meddling above the species level, and naming things after people.  But as far as the British species are concerned, the new arrangement better reflects the differences between the various groups.  The Trachyploeines fall neatly into three groups, which now correspond with the redefined genera.  Each has a characteristic head shape formed by the eyebrow ridges; Romualdius looks like a hippo.

I have covered the Trachyphloeines in the draft guide to broad-nosed weevils.  Many of them are rare, so I am missing photos of most species, but the text might still be helpful.  The latest version is here: https://drive.google.com/open?id=0B008cp9g-Pm8fmx2aE5JUXpkX0czQ2F1bWtJZWZJb1JxM2JLM0djMi1Ea2RWUzluMHNGVGc&authuser=0. 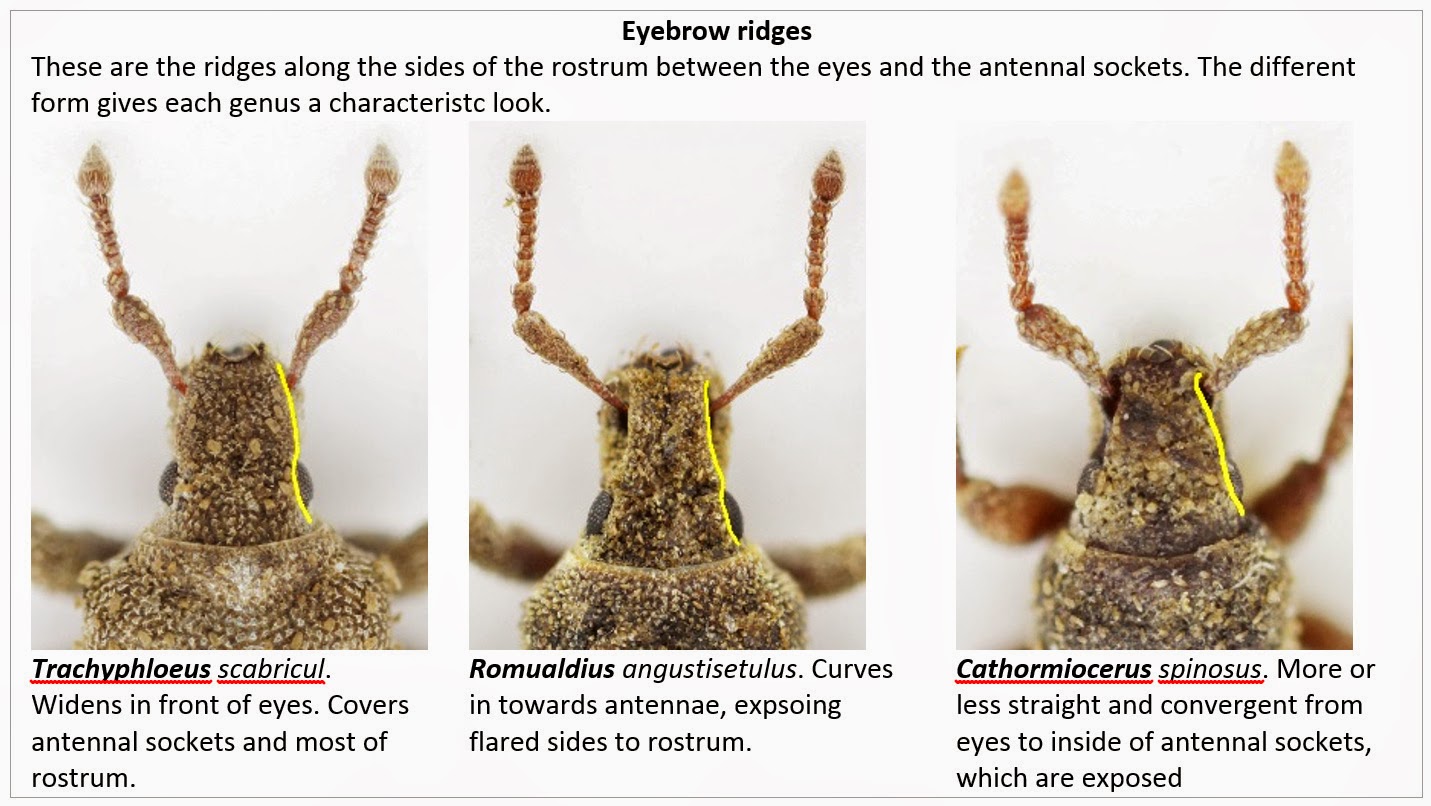