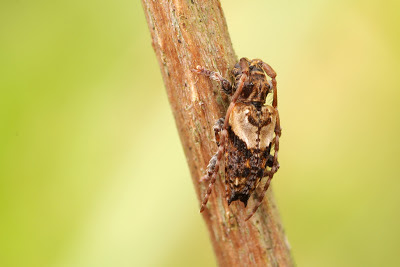 A sunny winter day tempted me out into the garden with a beating tray.  Many insects are still around as adults at this time of year, but they are inactive and hiding away in sheltered places trying to avoid turning into icicles.  This intricate little longhorn was in the ivy, and it made my day.  Longhorns are glamour beetles.  A lot of them are big and spectacular and some of them are rare and found only in top quality dead wood sites.  Andrew Duff's article in British Wildlife tells me that this one, Pogonocherus hispidus, often develops in ivy twigs, so it is less fussy than some of its relatives.

It was accompanied by Britain's tiniest ladybird Stethorus punctillum, which is too small to have its picture taken. 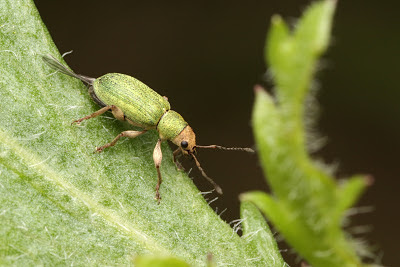 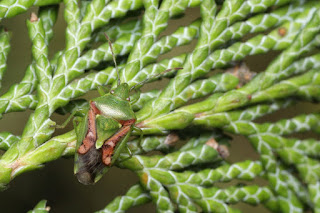 The neighbours have a cypress at the end of their garden.  Last year it gave me my first Pachyrhinus lethierryi.  This weekend it showered me in Juniper Shield Bugs Cyphostethus tristriatus when I tapped one of the overhanging branches.  These two species both seem to be spreading on garden cypresses.  The weevil is a recent import, but the shield bug is a native species.  Southwood and Leston wrote in 1959 that 'ripe juniper berries are the principal food and there is no evidence to indicate that the bug ever feeds upon any other plant.'  If that were still the case, the bug would probably be in trouble given the parlous state of wild Juniper in southern England, but now it has taken to garden cypresses it is spreading into new areas and is a common species across much of England.  I like changes like this.  It feels like witnessing a moment of natural history history, like the people who were there when the first Collared Doves arrived in Norfolk, or the people who probably were not there when the first plants and animals came back as the cold retreated at the end of the last ice age.  Exciting stuff.
Posted by Mark Gurney at 23:03