A nice sunny morning, so I went poking around in some sedge tussocks.  Some Notiophilus were out and about, having warmed up enough to scuttle around.  A Melanimon tibiale was more sluggish as it made its way across the moss; when spring arrives, this will be one of the commonest beetles on the bare sand patches on the heath. 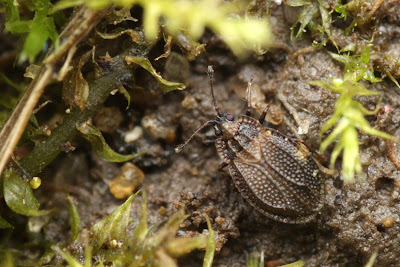 A couple of weeks ago I found the lacebug Physatocheila dumetorum in dead leaves on an oak.  This week's lacebug is much smaller and it lives among moss on the ground.  It is Acalypta parvula, a common species, but easily overlooked because it is tiny.  It shares its mossy habitat with Simplocaria semistriata, one of the cute pill beetles, another family of insects associated with mosses.  Like the other pill beetles, it can pull its legs into slots on the underside of its body and it can pull the ends of its legs into slots on its legs.  It works like a mini Transformer, turning itself into a smooth oval, like a pill.  I do not recommend it for headaches. 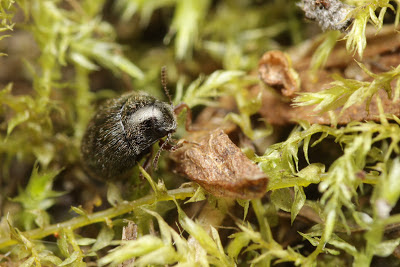