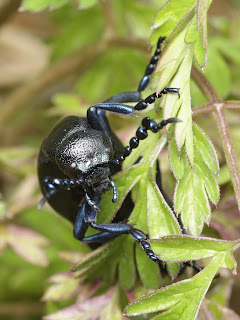 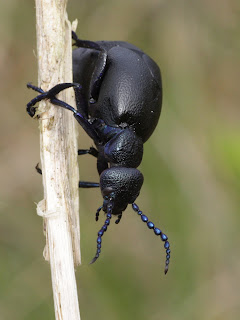 In a week of cold and rain, we timed our visit to Wallasea well and the sun was burning off the morning fog when we arrived.  We climbed up the sea wall and within five metres Rosie had found an oil beetle.  There were two more next to it, and as we looked about we realised we were surrounded.  The air was cold, but down at the base of the long grass the sun had heated things up and oil beetles were busy munching on the grass stems, looking for mates, and having a good time.

A large colony of Meloe proscarabaeus was discovered here in 2011.  Today we were visiting with Buglife to see how extensive the colony was, so we were delighted to find what Steven called 'oil beetle heaven'.  Oil beetles have an amazing lifestyle.  They lay eggs at the base of plants, the larvae hatch out and crawl up to the flowers where they wait to jump on to a visiting bee.  If the bee is of the right species, the larvae will be carried back to the nest where they will live off the bee's eggs or larvae and the provisions that the bee has left.  As well as this, oil beetles are big and bold and have a purple sheen.  Our two common species, proscarabaeus and violaceus have kinked, pointed antennae.  The male has a very pronounced kink. 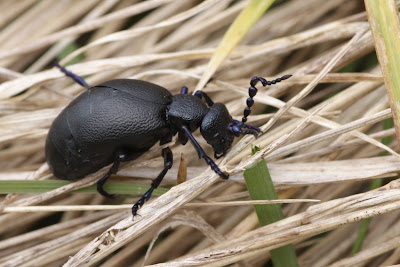 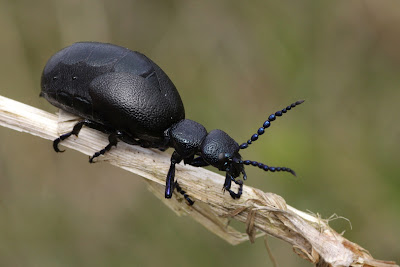 The female has only slightly kinked antennae.  During courtship the male grasps the female's antennae with the crook in his, as you can see in John Walters' video of a pair mating. 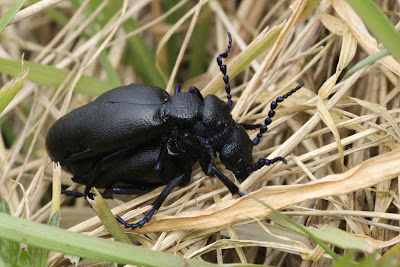 Oil beetles are immediately appealing, but something I had not appreciated was a common leaf beetle, Phaedon timidulus.  This is an easy beetle to find on umbellifers, and there were several on the Cow Parsley at the top of the sea wall today.  I was surprised to discover recently that despite being one of our commonest Chrysomelids, Phaedon timidulus is an uncommon insect in the rest of the world; it is known only from Britain, Ireland, France, and Tunisia.  It is nice to find something that calls Britain home rather than a small outpost at the end of the main part of its range. 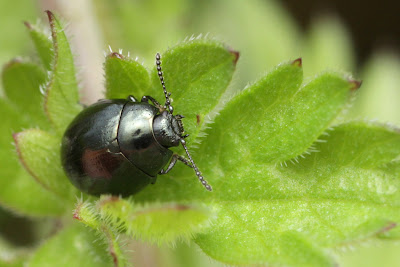 In the afternoon we checked another part of the sea walls.  The sun had gone in now, and I was not surprised that we found no more oil beetles.  But there were better things to come. 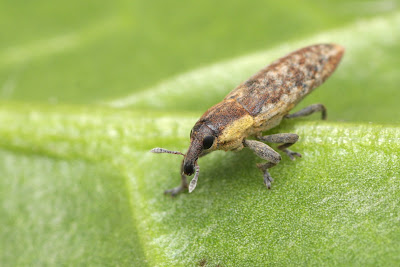 The genus Lixus has quite a history in Britain.  After some confusion, it seems that four species used to be found here, but they were all gone by 1960.  Then we got a new one.  Lixus scabricollis was discovered in an insalubrious part of Kent in 1987, and it has since been found in several coastal counties in southern England and Wales.  Nobody seems sure whether this represents a welcome natural return for Lixus or an accidental introduction.  It may be a bit of both: a colonist that has found its way here from introduced populations in northern Europe.  Either way, I was very pleased when one fell out of the first Sea Beet I shook in the hope of finding this banana-shaped weevil. 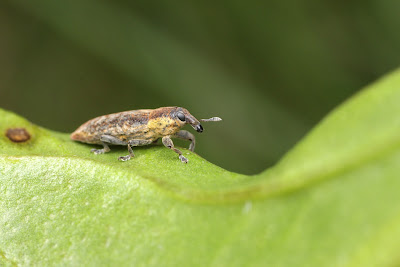 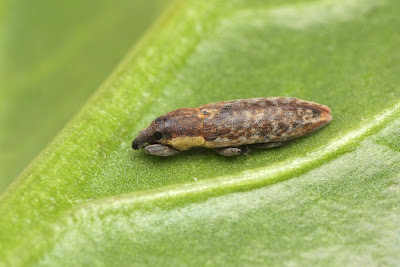 Like most weevils, it tucks its legs in and plays dead when it is disturbed.  It is long and thin and can easily pass for a seed when it does this, but it reminds me of a retriever lying by the fire with its head between its front paws.  We searched more Sea Beet to see how common the banana beet weevil was.  There were a few more, and, rather oddly, one beet plant produced Malvapion malvae, Aspidapion radiolus, and a dozen Podagrica fuscipes.  These three species feed on mallow, so perhaps there was a mallow nearby.  Podagrica fuscipes is much the scarcer of the two British species in this genus.  The other, Podagrica fuscicornis, is widespread in south-east England, but fuscipes is rare away from the Thames Estuary.  It was not an unexpected find here in its heartland, but it was still good to see it. 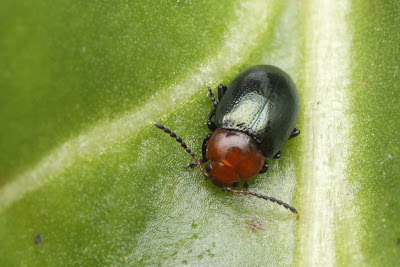 By late afternoon a Short-eared Owl was out hunting over the rough fields, and it was joined by a Barn Owl a little later.  A nice male Merlin and more Corn Buntings than I have ever seen before were other highlights of the day.
Posted by Mark Gurney at 21:58