After dark II: In praise of pine 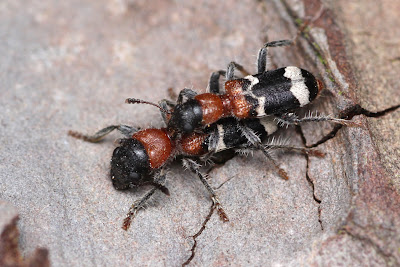 At the reserve this afternoon I noticed a lot of ant beetles Thanasimus formicarius running about on some pine logs.  I thought this should mean that i) there are lots of deadwood beetles about, and ii) tonight would be the time to look for them because the hot day would have made them active.

The ant beetles were still out when I returned after dark.  It is getting tiresome to mention Nalassus laevioctostriatus, but as usual it was everywhere.  The big pine logs also had two big weevils: Hylobius abietis and Pissodes pini.  The larger of the two, Hylobius abietis, is a common pest in conifer plantations.  Pissodes pini is a widespread but local weevil, commoner further north.  I have seen it in native pine woods in Scotland, but this is the first I have found in England.  Pine is often demonised in England.  In Scotland it is romanticised in the Forest of Caledon, the defining component of native pinewood, to be cherished and protected.  In England it is seen as an invader and a nuisance on heaths and in broad-leaved woodland.  Is this right?  Scots Pine Pinus sylvestris was a native tree throughout Britain until the climate warmed after the last ice age and it retreated north.  How long did it persist in the south?  It cannot have been common, but if you look at the records favourably, it is possible that it held on in England and Wales until only a few hundred years ago, its extinction being hastened by forest clearance.  This would give it the same status as beaver, wolf, or lynx, which are considered lost natives whose return would be welcomed by some and called a conservation success after millions of pounds had been spent on making it happen.  As far as I can see, the only difference between those species and Scots Pine is that Scots Pine has recolonised its former range for free, and it has been so successful that it needs to be controlled (and that last part could apply to any of the animals if they were brought back).  We need to keep controlling pine, but I do not think we should seek to extirpate it or always see it as a non-native bad thing, and we should celebrate the many animals and fungi that it brings with it. 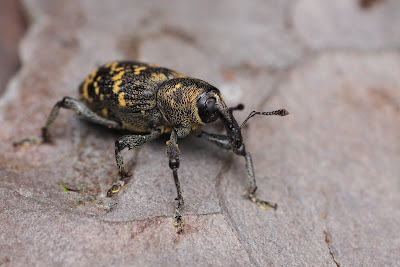 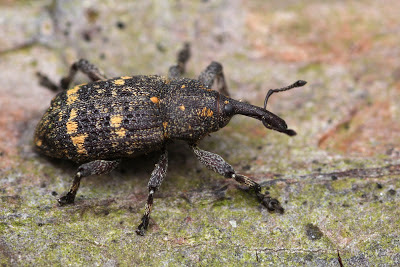 The next target was birch.  No deadwood beetles here, but there were lots of Aradus depressus, a weird looking and very flat bug. The highlight of the night was on a tall, standing, dead Beech.  This is a splendid tree, with a hollow base and large Ganoderma bracket fungi growing inside and out.  It looks as though it should be home to rare deadwood beetles, and a sprite or two, and tonight I found one on it (a beetle, not a sprite).   Any click beetle with black elytra and red pronotum is going to be something good, and this one turned out to be Ischnodes sanguinicollis, a very scarce insect found in rotting wood of various trees. 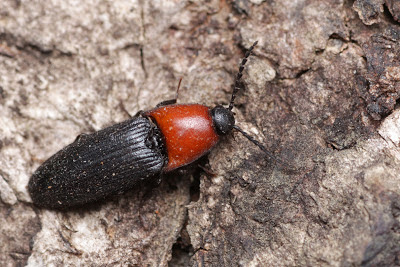 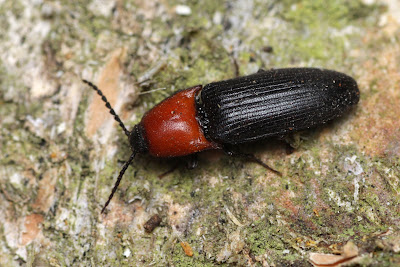 Although most people see the reserve as a heathland site, its deadwood fauna is just as important, perhaps even more so, and we must not neglect it.
Posted by Mark Gurney at 23:00