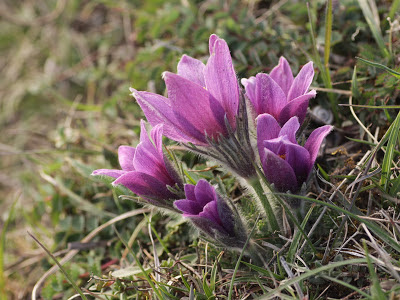 Several people had told me that the display of Pasque Flowers Pulsatilla vulgaris at Therfield Heath this year was one of the best they had ever seen.  So on a sunny day Col and I went over after work to check out the purple.  We were a little late in the season, but it was a beautiful evening, and there were thousands of flowers on the side of the hill, filtering the evening sun through their sepals. 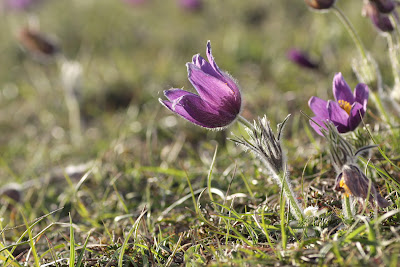 Looking east, the hill was dotted with purple flowers, each with a blaze of yellow stamens at its centre. 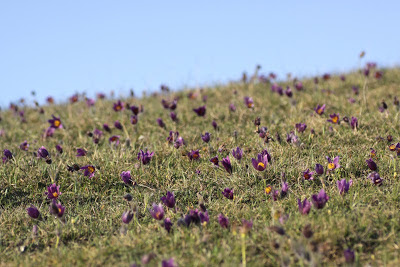 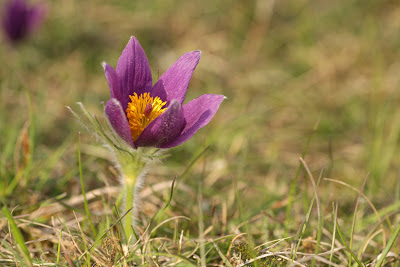 To the west, against the light, there was a haze of delicate mauve and white, as the hairs on the leaves and stalks gave each plant a halo. 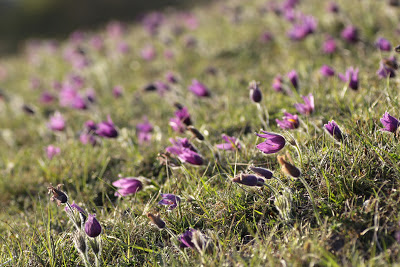 Pasque Flowers are such special things.  They grow in chalk grassland, where they keep the best of company.  At Therfield Heath they share the turf with Hairy Violets Viola hirta, and later in the year, the fruiting heads, which are just as spectacular as the flowers, will stand above Bastard Toadflax Thesium humifusum, another rare (but much less showy) plant.  We were a little late to catch them at their best.  There is a short time in every Pasque Flower's life when its blooms are open enough to expose the golden stamens, but its sepals are still deep purple enough to create a startling contrast with them.  Soon the flowers fade to lilac, still pleasing, but not so garish. 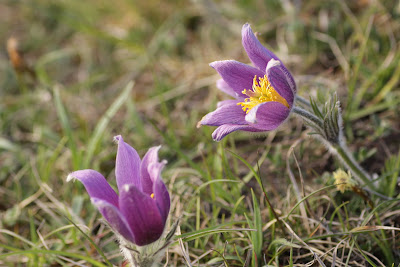 It had been a warm day, and this seemed to have brought out the smaller of our two bloody-nosed beetles Timarcha goettingensis in good numbers; there were singles and pairs all over the grass.  Andy Schofield called this Britain's dopiest beetle, and they do have the air of an insect that is not in a hurry and has no great concerns in the world.  If they do come across something to rouse them into distress, they exude a spot of red fluid from their head and hope that whatever has forced them to divert from their languid state will go away. 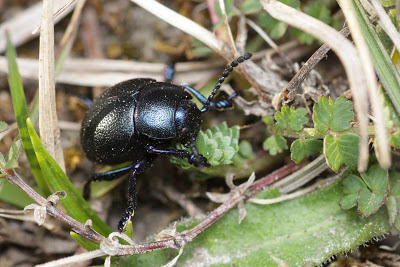