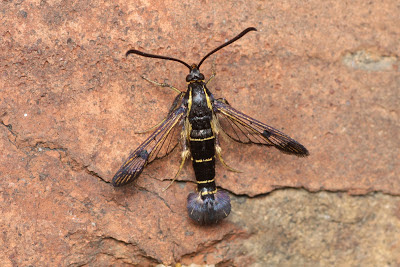 I had been out on my bike for much of the day and I was hot and hungry when I arrived home.  The red currants in the garden were looking bright and deliciously tempting on a summer afternoon, so I started stripping berries and found them cooling and refreshing.  I was so taken with them that my brain ignored the clearwing moth that I saw as reached down to take another handful.  The moth flew off, and it was a second after it had gone before I realised what had just happened: I had seen a clearwing.  Now it had gone.  Oops.  It was on a currant so I had a good idea what it was likely to be, and after grabbing net, camera, and the appropriate pheromone from the freezer I was standing back in the garden, this time concentrating on moths.  It did not take long for it to come back, buzzing around the same bush and settling on the sunny part of the wall behind it.  It was indeed a Currant Clearwing Synanthedon tipuliformis, a new moth for me.  Happy that I had recovered what could have been an embarrassing almost-seen, I celebrated with few more currants. 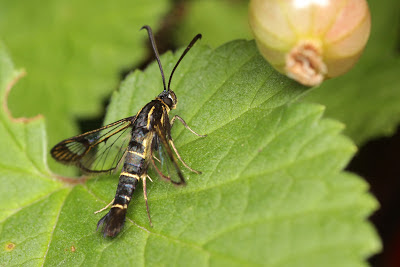 Jacqui arrived back about twenty minutes later, so we got the pheromones out again, and the moth appeared again very quickly, this time buzzing about the lure excitedly.  I took the lure down and the clearwing posed nicely on a leaf before disappearing as clearwings so adeptly do. 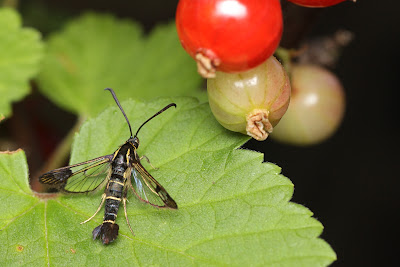