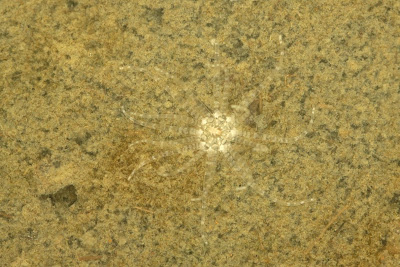 Our visit to the Isle of Wight coincided with the Perseid meteor shower, and in a corner that was darker than my home town, but still probably too bright for most astronomers, we saw four meteors streak across the sky like fireworks.  Being out and looking up on a clear night reminded me that the night sky is one of the wonders of the world.  I could not do it justice with a camera, but I was happy to try with some closer stars.  The Starlet Sea-anemone Nematostella vectensis is tiny and does not produce trails across the sky, but it has an interesting story.  It had been living undiscovered in shallow coastal lagoons until 1935, when Thomas Alan Stephenson described it as a new species based on specimens from Bembridge on the Isle of Wight, which is where we found ourselves today, peering into shallow waters and looking for small white stars in the mud.  It was nice to find them here dotted over the soft surface of the saline pools almost eighty years after they were first noticed.  Since their discovery, these sea-anemones have become a favourite species for those studying developmental and evolutionary biology and other biological questions.

Dr Stephenson named his new anemone after its place of discovery, the island the Romans called Vectis.  It was subsequently found on the other side of the Atlantic, first along the east coast of North America, and then on the Pacific coast.  It has received a high level of protection in England because of fears for its saline lagoon habitat, but recent studies suggest that it is not native here.  Genetic analysis reveals that the English and Pacific populations are so similar to those on the eastern seaboard of America that they could not have been separated for long; hardly the pattern of variation you would expect if the anemones had been separated on both sides of the Atlantic for millennia.  The evidence suggests that Nematostella vectenis, despite being discovered and named here, is only a recent arrival.  The most likely explanation is that it has been accidentally transported as a stowaway on a boat.  Non-native status may rob the Starlet Sea-anemone of the high standing and protection it currently enjoys, but it remains a curiosity and a part of the history of our natural history.

Sea-anemones are best sought by day, but Glow-worms Lampyrus noctiluca are best enjoyed after dark.  I do not often see them in their bioluminescent glory, but we managed to find one on each night we went out on the reserve.  The first was in a wood, the second was along a path between the lagoons where we had heard Wood Crickets Nemobius sylvestris singing during the day. 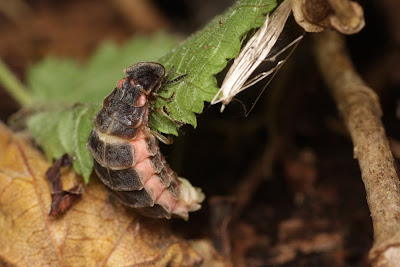 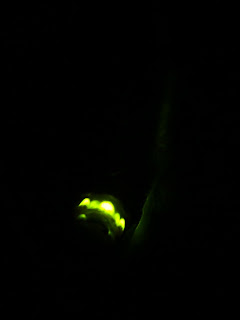 Apart from the meteors and Glow-worm, our first night had not produced much; a Lesser Stag Beetle Dorcus parallelipideus was one of the few other things of note. 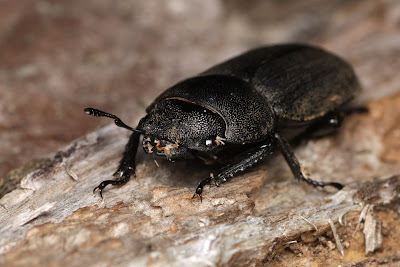 This evening was slightly more productive.   Before the sun went down I had a short walk from where we were staying to the allotments at Lake to look for Martin's Ramping-fumitory Fumaria reuteri.  I had seen this here over ten years ago, when an allotment holder let us in to examine the plants.  There was nobody around this time, but one of the plants had escaped onto the nearby road, allowing close enough examination to confirm its identity. 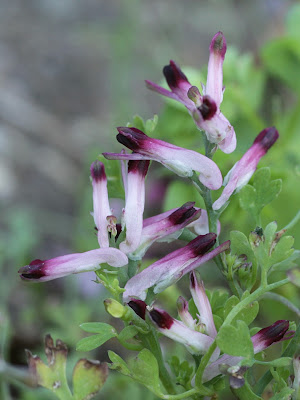 Like the sea-anemone, this species was once thought of as a rare native, but opinion now considers it a recent introduction.  Whatever its status, there is no doubting that it has been turning up in new places.  The population in the allotments at Lake was for a long time thought to be the only one in Britain, but plants have recently appeared at scattered sites from Kintyre to Kent.