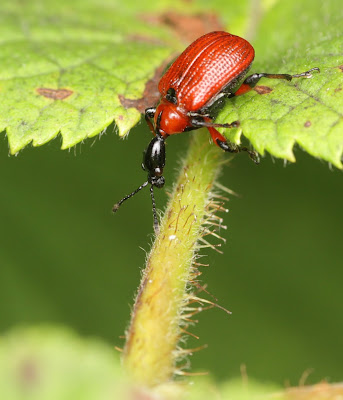 The spectacular giraffe weevil of Madagascar Trachelophorus giraffa is often featured in wildlife documentaries.  We do not expect such bizarre and colourful species in the temperate zone, but although it does not have the fame of its larger relative, we do have our own shorter-necked but just as colourful version.  Apoderus coryli lives on Hazel Corylus avellanae.  It is bright red and black, just like its Malagasay cousin, but although its neck is long by normal standards it is not of giraffe proportions.  Perhaps we can liken it to an Okapi instead. 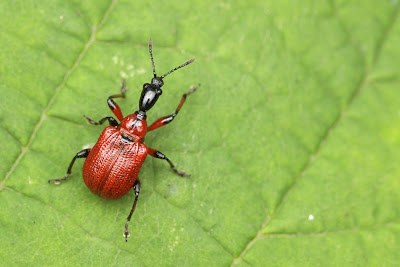 Like the giraffe weevil, Apoderus coryli is a leaf roller, making barrel-shape rolls from the leaves and laying its eggs inside them.  Although it is a widespread weevil, I have not seen it very often, so I was excited to find one on a Hazel in a copse on the reserve yesterday morning. 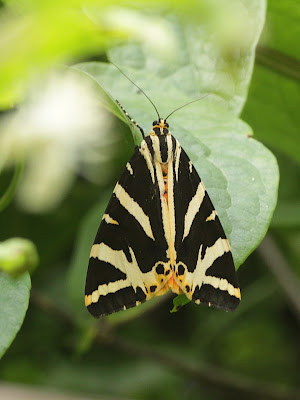 Today, another exotic insect got me running.  Some bright orange fluttered past and landed on Traveller's Joy Clematis vitalba in the hedge.  I quickly chased after it and once I had it in the binoculars I could see that it was a Jersey Tiger Euplagia quadripunctaria.  Now it was settled it had transformed from orange to zebra print, losing its colour but none of its visual impact.  This moth has been spreading out from its south Devon home, and it has been resident on the Isle of Wight since the 1990s. 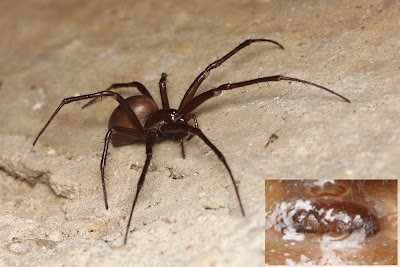 The last of today's spectacular species may not appeal to everyone.  Cave spiders are huge, even bigger than the house spiders that seem to end up in baths more often than is good for them.  Keith took us to the old pump house out on the marshes where he lifted an inspection cover to reveal several enormous shiny, dark chocolate spiders.  Most of them were immature, but there were three big mammas that seemed to be adult, so we set about trying to get one on its back so we could see the relevant bits to identify it.  There are two British cave spiders, and they can only be separated by looking at the epigynes (females) or palps (males) of adults.  Our spider, when we got it flipped over, had the wide, narrow epigyne of Meta bourneti, which is much the rarer of the two.  This was another excellent natural history moment, combining the unexpected and spectacular with just a little frisson. 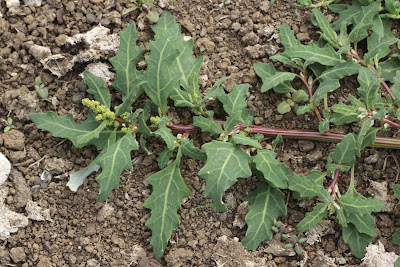 Many goosefoots are difficult to identify, but Oak-leaved Chenopodium glaucum is easy, and I like it almost for that alone.  It also has an attractive silver lining on the underside of the leaves (just visible in the photo above on the leaf below the tip), which adds to its appeal.  This plant is probably an ancient introduction like poppies and many of our other cornfield weeds.  It is uncommon, but I see it around the Thames Estuary quite often, and there is a good population here at Brading.