The day of the Olinguito 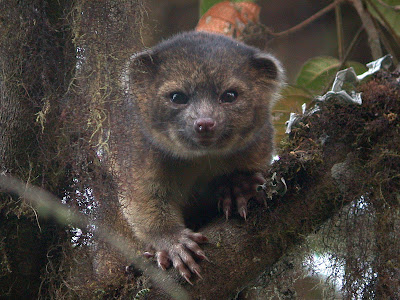 South America is the bird continent.  During my two years in Ecuador I saw over 1100 species, including a dazzling array of hummingbirds in the cloud forests of the Andes, where I spent most of my time.  Mammals were much harder to come by, especially away from the Amazonian lowlands.  You could almost guarantee a Red-tailed Squirrel and several bats, but anything else was a good sighting and cause for excitement.  Steve and I had one such experience late one afternoon as the clouds closed in on the upper Tandayapa Valley.  We were walking along the road when we saw something in a tree.  It looked like a Kinkajou Potos flavus, a racoon-like mammal I had once seen at the Bird Lodge, but trailing behind the animal we were looking at now was a bushy tail unlike the sleek prehensile tail of a Kinkajou, which grasps branches and wraps around them as it moves through the canopy.  We took some grainy photos in the fading light, and Steve got a short bit of video.  Back at the lodge, the field guide allowed us to identify our mammal as an Olingo Bassaricyon gabii. 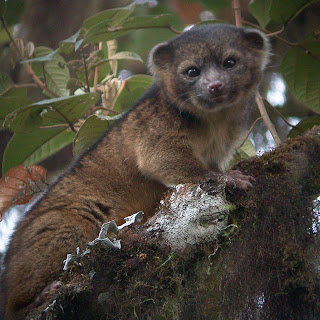 Soon after I returned to Britain, Roland Kays contacted me.  He said that he had seen my Olingo photos and that they were of an undescribed species that he and his colleagues were working on!  He asked whether he could use them to help with the paper they were preparing, which he hoped would be submitted by the end of 2006.  I excitedly said yes, but that was seven years ago and I heard nothing more about it until last week when this message from Roland arrived in my inbox:

A few years ago I contacted you about using your olingo photos as part of a scientific project we have about the genus and you said that would be fine.  In fact, you have the best photographs in the wild of what turns out to be a completely new species.  It took us longer than expected to pull all the parts of this story together, but it is now ready to hit the public via publication in a journal called ZooTaxa.  Kris Helgen from the Smithsonian is the lead author, and we expect (hope) there to be a fair amount of press associated with the discovery, which we hope will also raise the attention for the conservation needs of Andean cloud forest.

So that is how my photos became the face of the Olinguito Bassaricyon neblina.  It certainly has received a fair amount of press.  Over the last two days I have seen my Olinguito looking out at me from most of the national newspapers, the television news websites, and dozens of blogs and Youtube videos.  My small part in this discovery is all down to luck, but it has been exciting to be involved in it.  And I need to make the most of it: when else will my photos be seen by millions of people?
Posted by Mark Gurney at 19:00