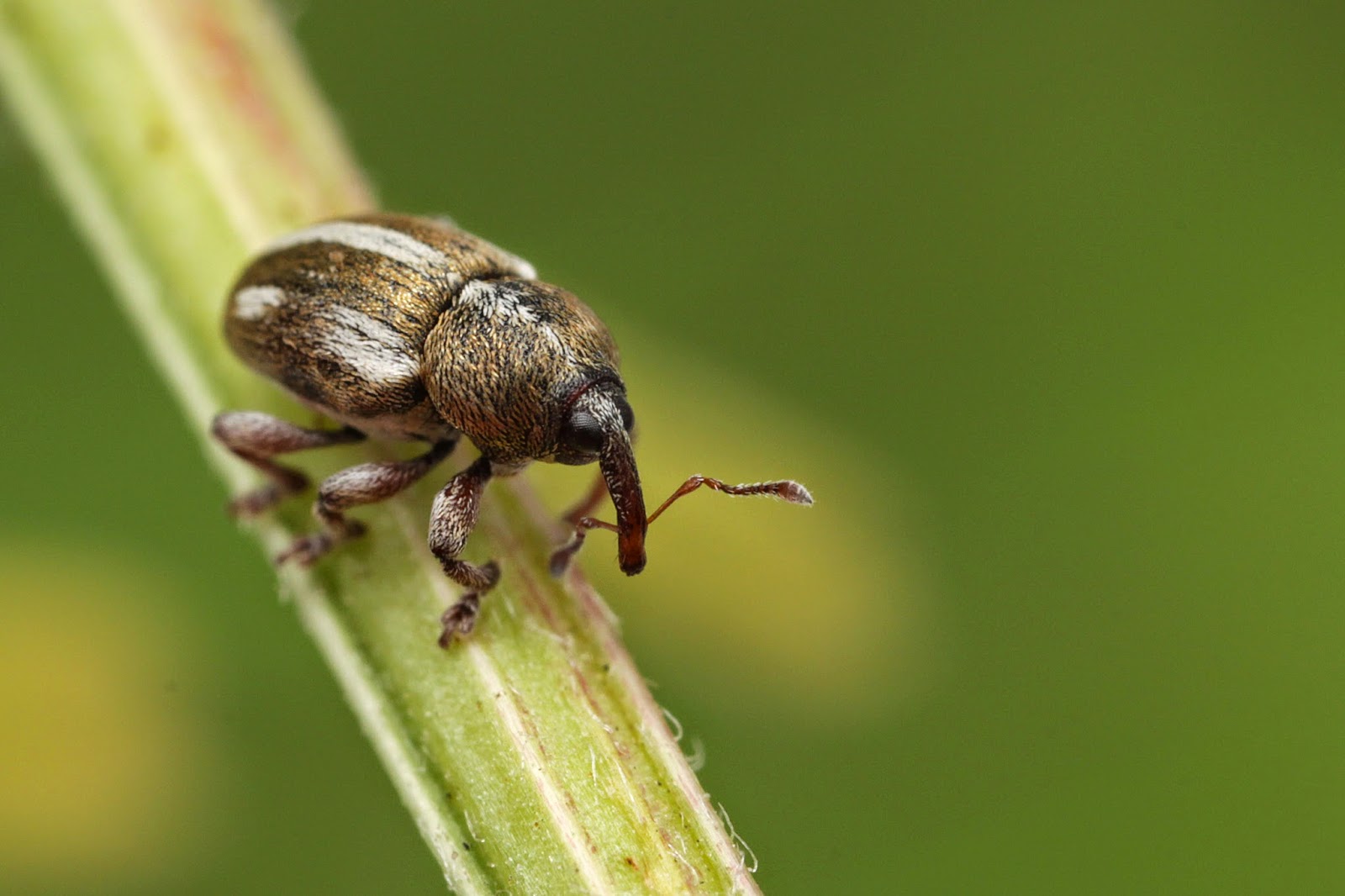 James and I celebrated Midsummer's Day by going to the Breckland to look for some of the special beetles of disturbed ground.  The widening of the A11 has created some excellent conditions for these species as weeds have appeared in abundance on the spoil and bare areas along the side of the new road.  Near Thetford there are some stretches dominated by Flixweed Descurania sophia, which is host to a couple of uncommon weevils. 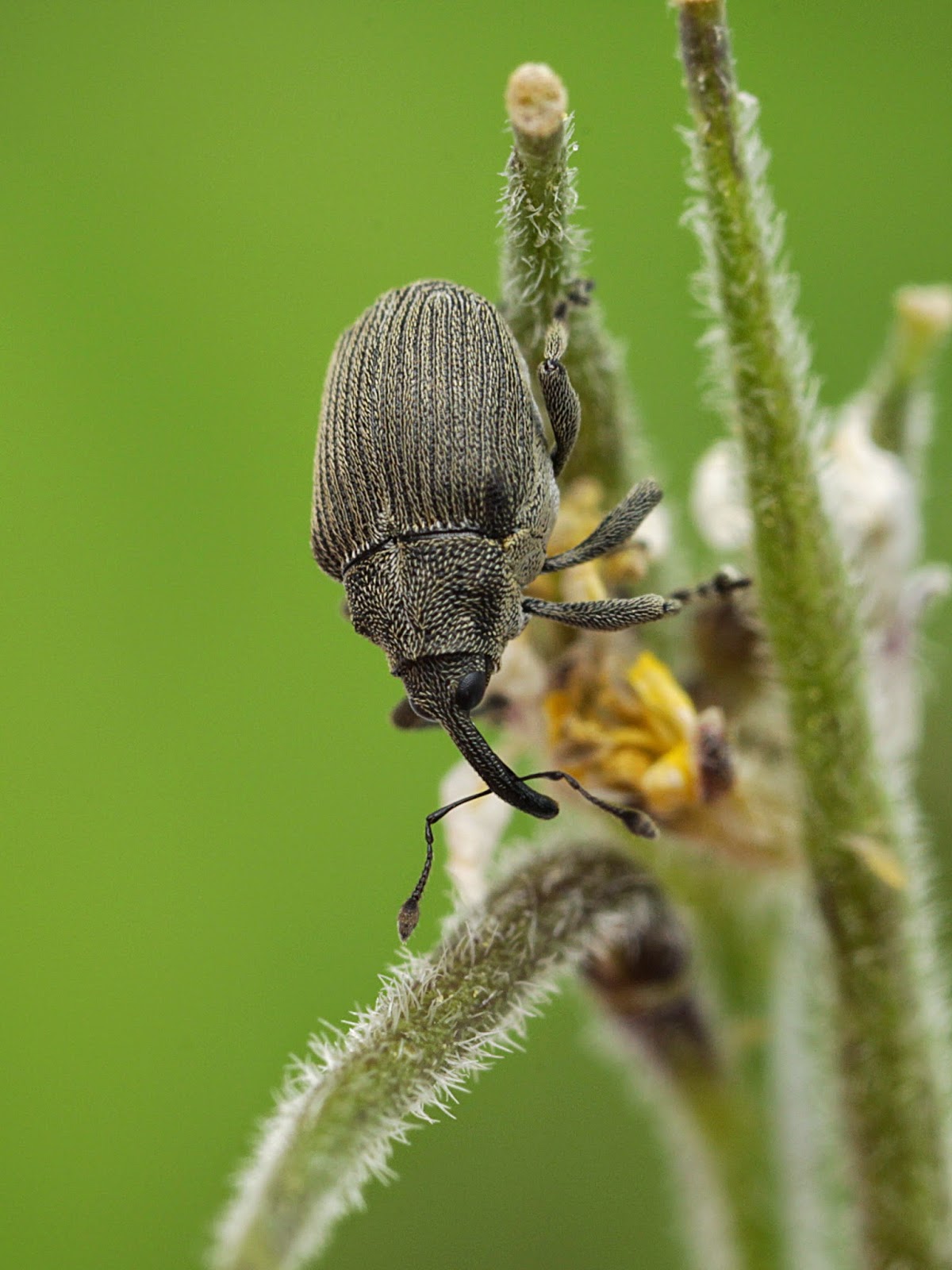 The bigger one is Ceutorhynchus rapae, similar to the common obstrictus, but with a slightly different pronotum shape.  It is separated in the keys by the tooth on the hind femora, but this can be very small and easily overlooked; one of my specimens does not seem to show it at all.  An easier distinction is in the claws, which are brown and toothed in rapae, black and slender and untoothed in obstrictus. 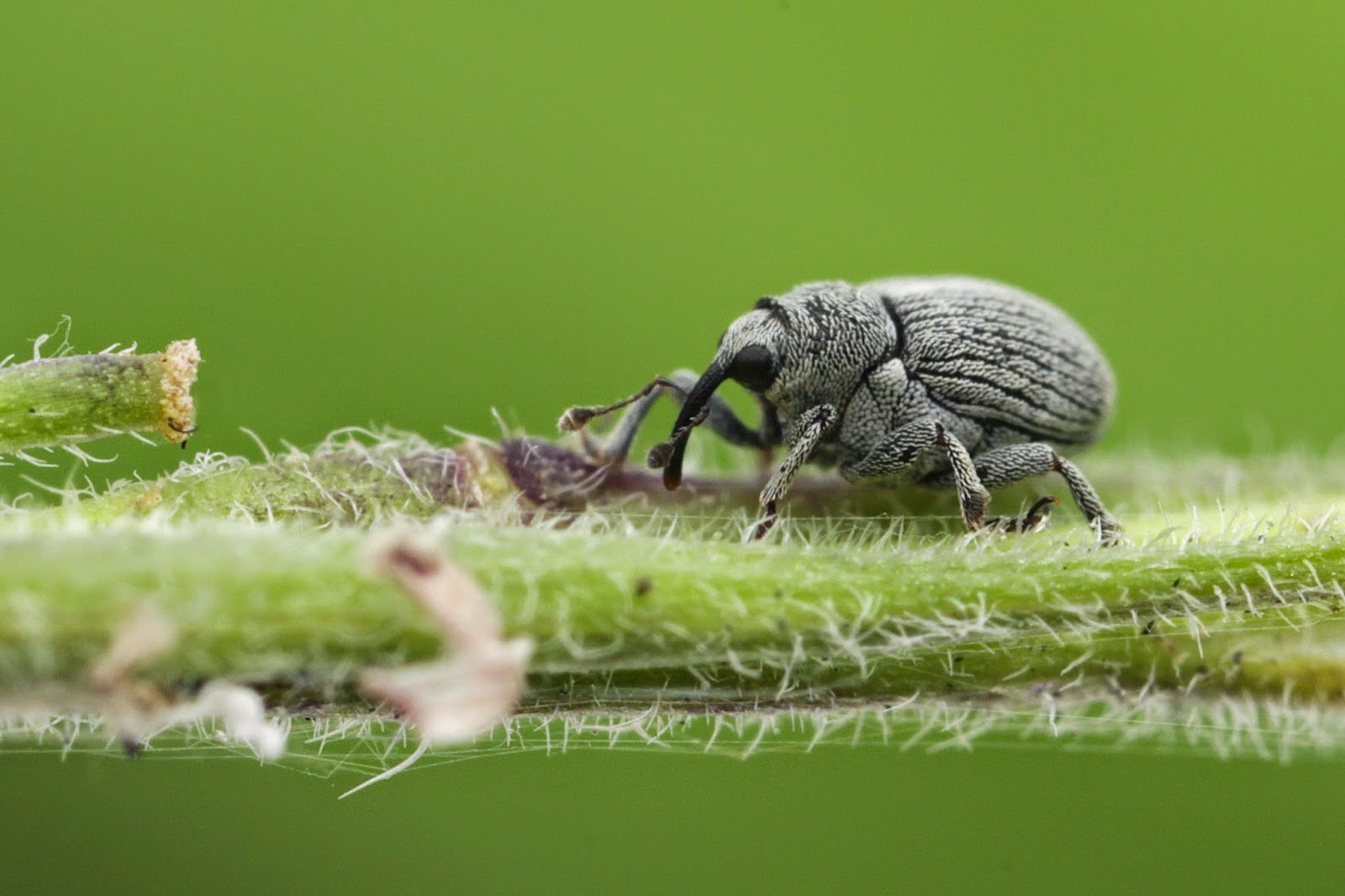 The small one is Ceutorhynchus pulvinatus, more densely covered in white scales but otherwise like the very common typhae.  The rare species can be identified by its swollen pronotum, like a moghul dome, and the long last tarsal segment.

The Flixweed was growing with other ruderal and waste-ground plants, including some nice Tower Mustard Arabis glabra, Corn Chamomile Anthemis arvensis, and the delightfully named (in English and Latin) Loose Silky-bent Apera spica-venti. 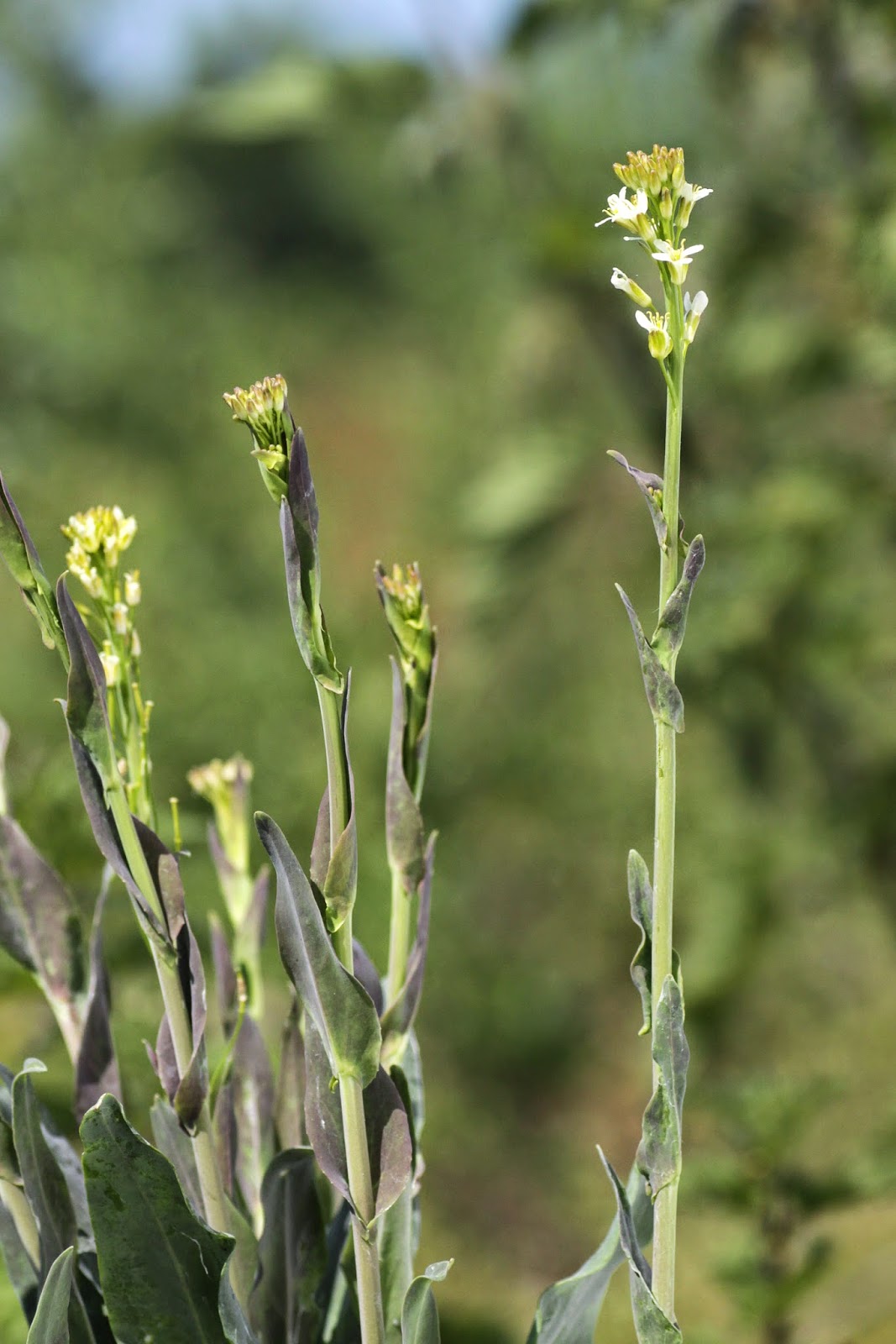 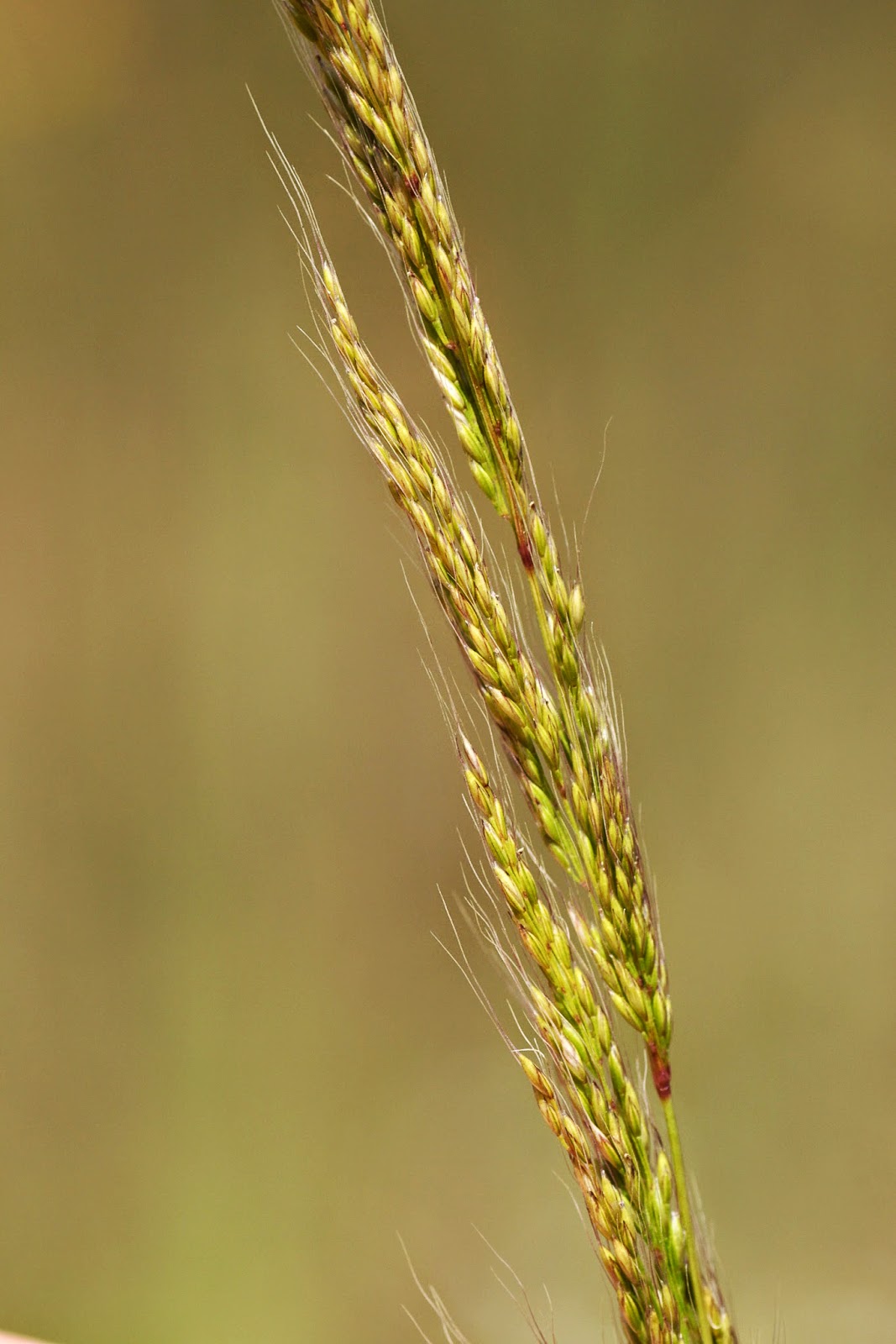 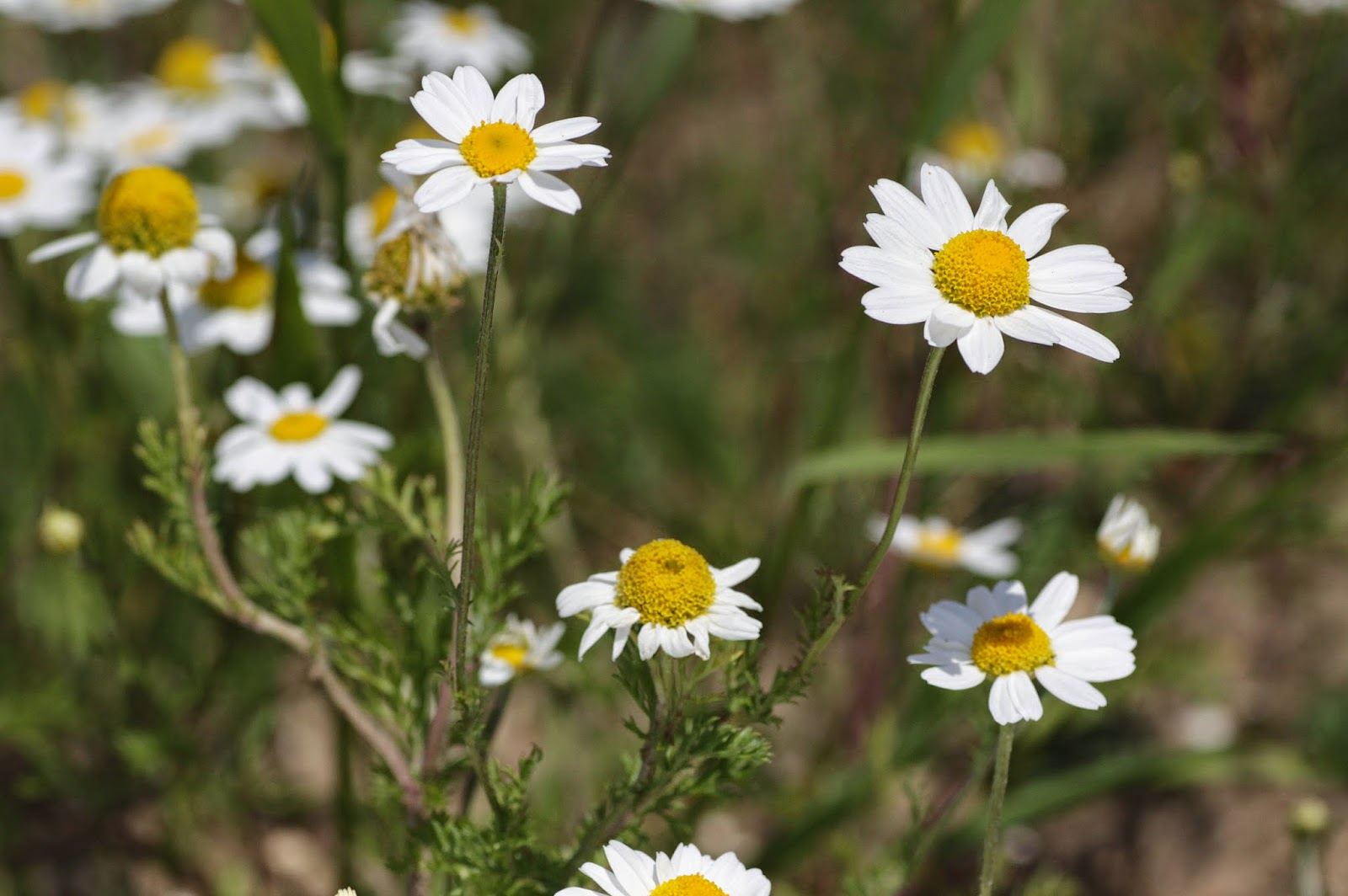 How long will this resource last?  I hope the authorities will not destroy it all by planting the road verges or sowing them with grasses and killing off the rare plants, but they usually do, spending thousands of pounds in the process and calling it greening or landscaping, which is just a euphemism for destruction. All it needs is a bit of disturbance every now again and this could be a refuge and a corridor for many of the scarce Breckland species that are in decline because there are not enough rough corners and disturbed tracks in the countryside.

You could not complain about a lack of disturbance at our next site.  The ground next to the power station is used by scramblers, karts, and other vehicles, which have churned up the sand and made a lot of bare ground.  There is perhaps too much disturbance here, but at the edges of the tracks some plants are able to establish themselves.  When we arrived we were somehow recognised as entomologists by some of the fathers of karting children.  They wanted to know what the black and yellow bugs were that were accumulating in the footwell and front of the kart as it was racing through the vegetation.  We were able to confirm that they were Cinnabar caterpillars as one of them had suspected.  We learned that Tyler, one of the kart drivers, was a keen entomologist himself, and he was here celebrating his birthday with some friends.  Later, James was called over by Tyler to examine the by-catch again.  When he returned with Tychius quinquepunctatus in a tube I was almost speechless.  Actually, I had plenty to say, but none of it is repeatable here. 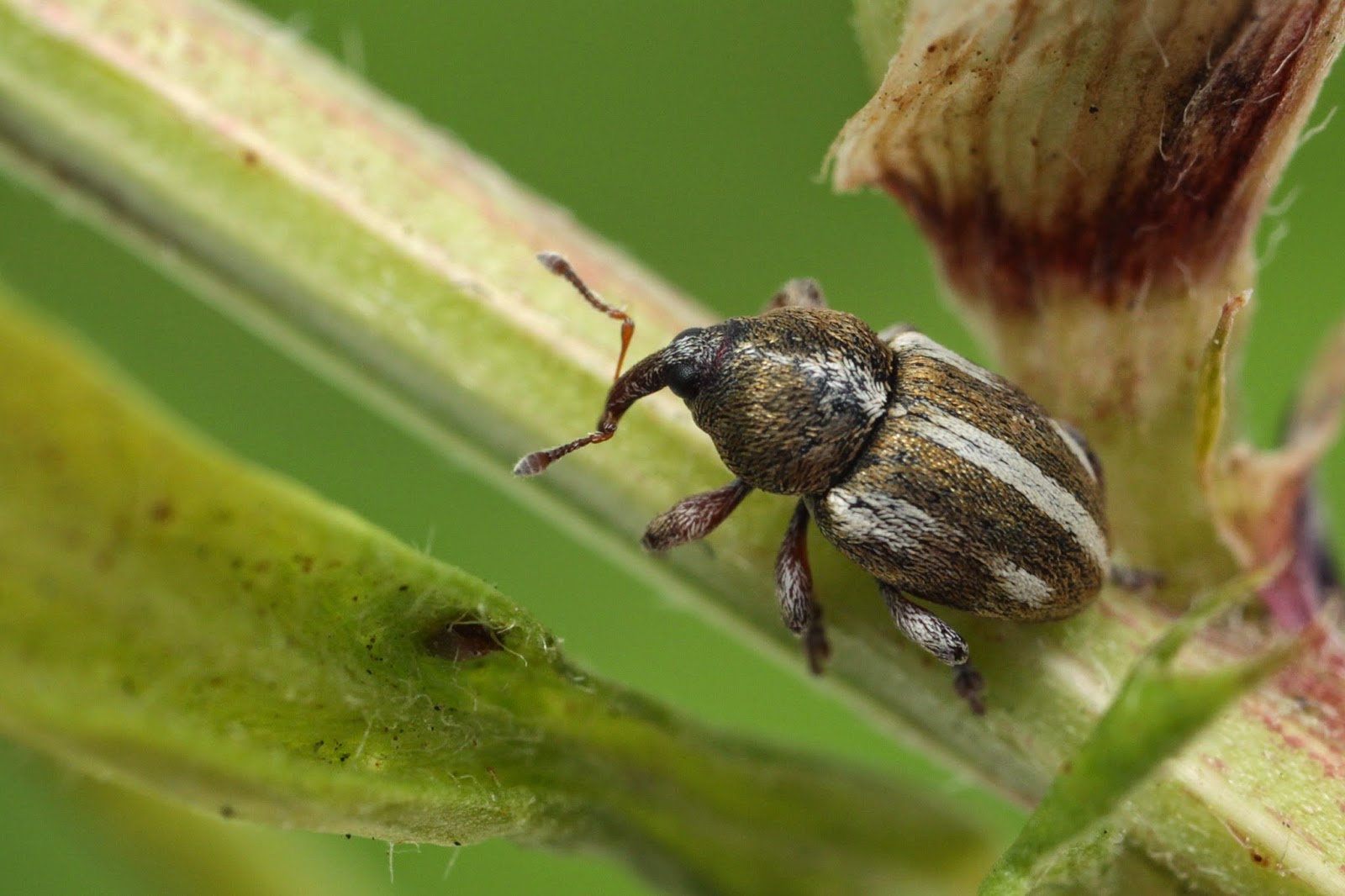 I had just been handed one of our rarest weevils, but we had no idea where it had come from.  This species feeds on vetches, which were not much in evidence among the churned up sand.  We asked the karters where they had been, and we followed their route and looked among the legumes around the edge of the site but we could not find any more.  So the provenance of the weevil is a mystery.  It must have come from somewhere on the site, but who knows where?  Nevertheless, it was a remarkable find, even though it had lost a few scales and gained a bit of dust during its journey among the seed and sand in the footwell.  Many happy returns, Tyler. 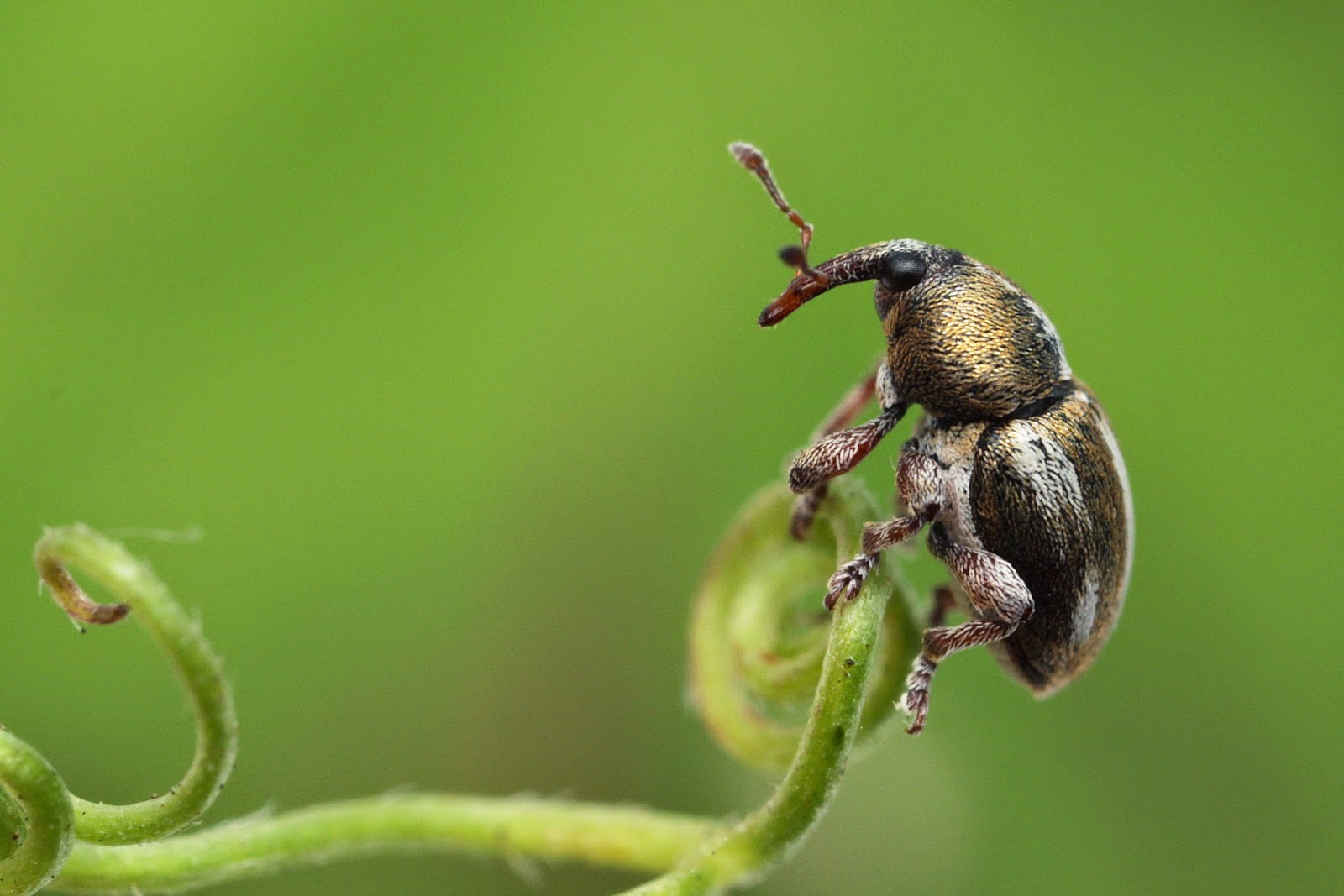