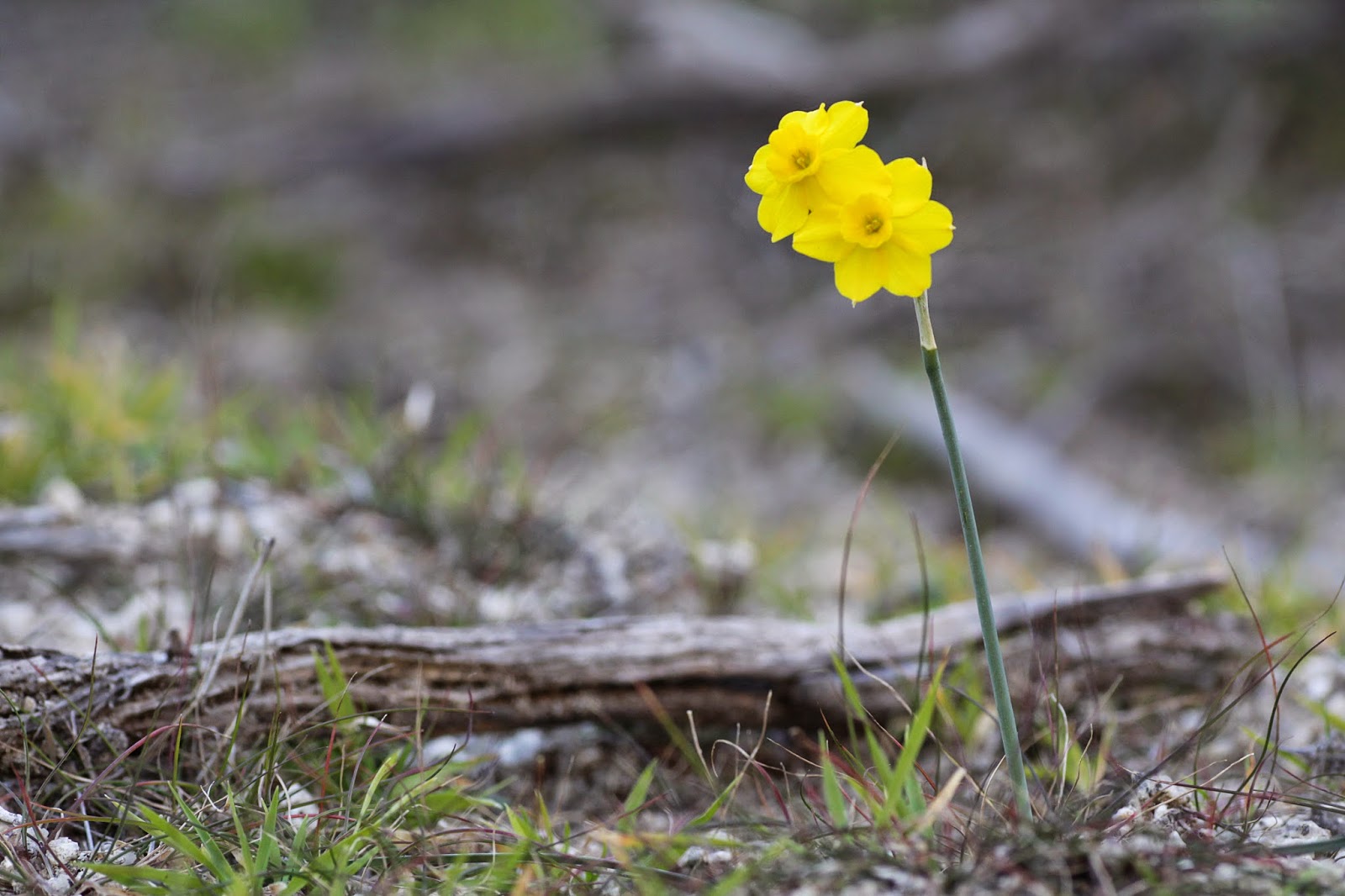 We were up early and braving the cold before we started the drive to Los Escoriales.  Our destination was only 7.5km away in a straight line, but we were not taking a straight line to get there.  We had a detour on tortuous roads down the valley, on tortuous roads up the other side, and on a tortuous road across the side of the hill.  After an hour, we made it.  There were a couple of stops on the way: one for a group of Hawfinches in streamside tree, another for two Iberian Green Woodpeckers that had found a telegraph pole to their liking. 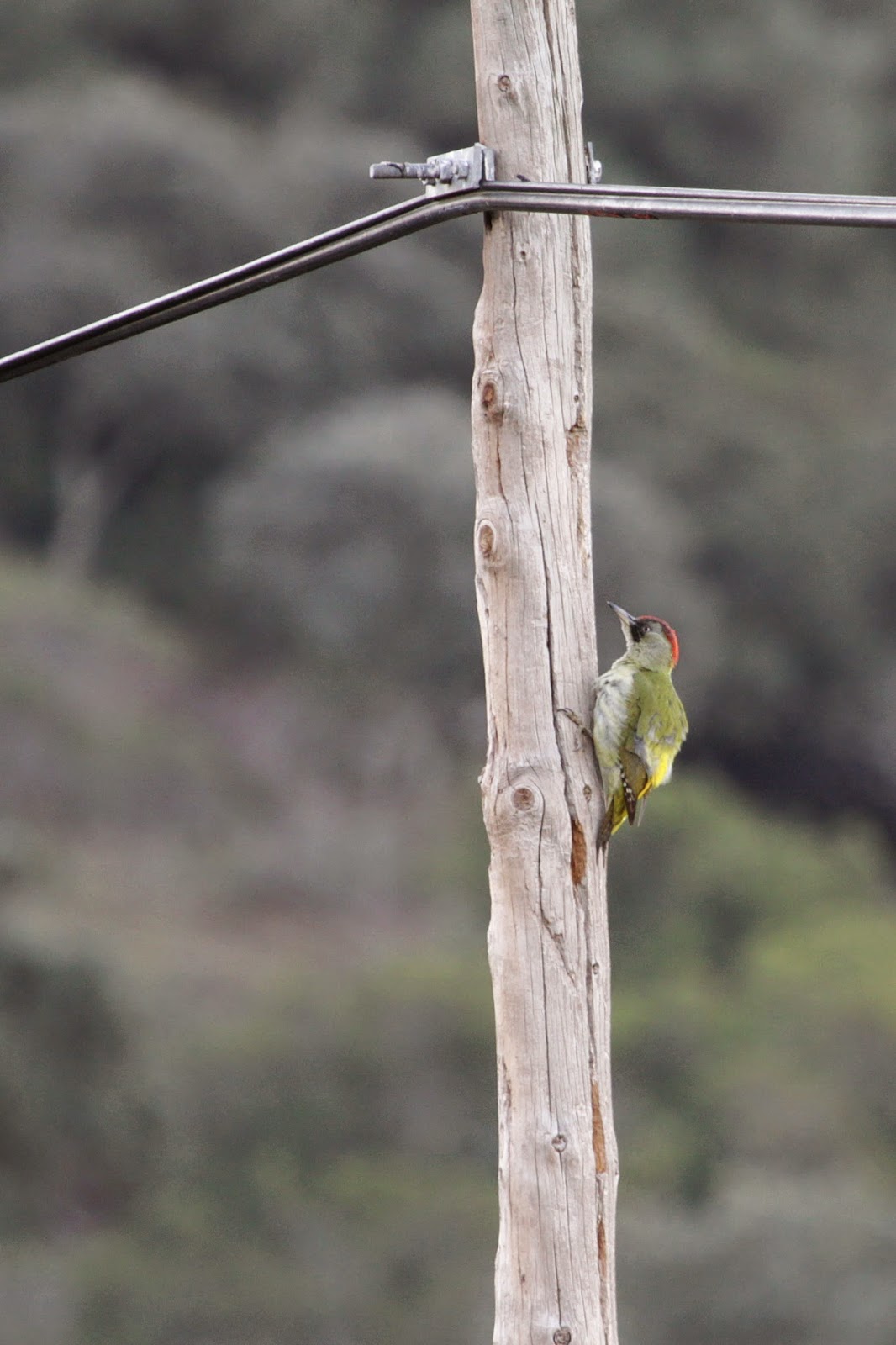 Then we started the scanning and waiting.  Most of the recent lynx encounters I had heard of had taken place along this track, so we settled in and hoped.  We potentially had five days of this ahead.  There were other things to look at while we waited, the most exciting of which, in my minority opinion, were the jonquills by the side of the road.  But it was early in the day and I was saving them for later when there were likely to be fewer mammals around and there was less chance of being focused on measuring flowers at the moment a lynx decided to cross the road.  For now I was content looking at some distant Mouflon on the opposite slope, and my first Wild Boar rootling in the valley.  And plenty of Red Deer. 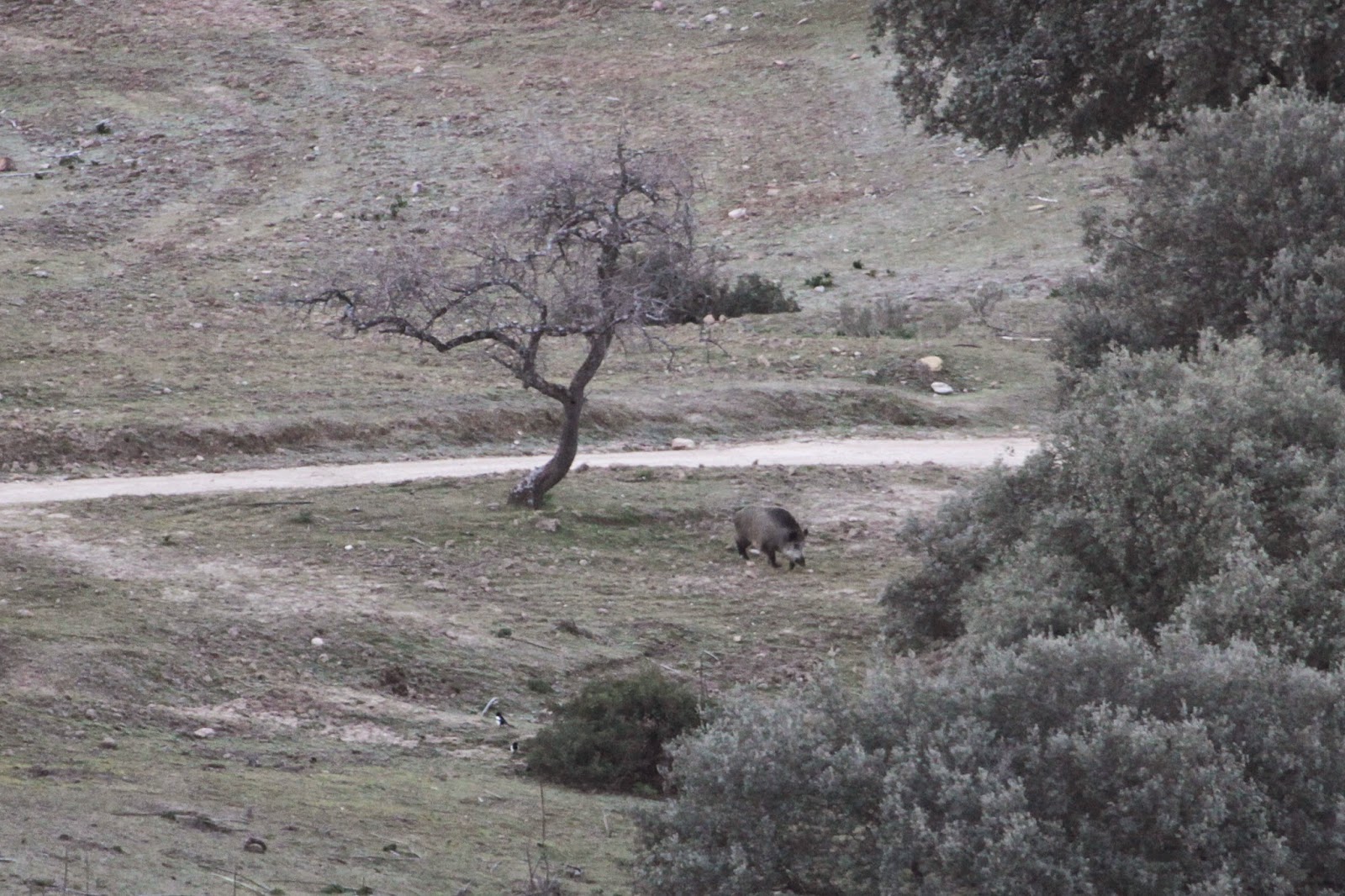 There was a clear sky, and as the sun appeared over the hill the birds warmed up and we could see the Santuario Virgen de la Cabeza teasingly reminding us that where we had set out from was really not very far away. 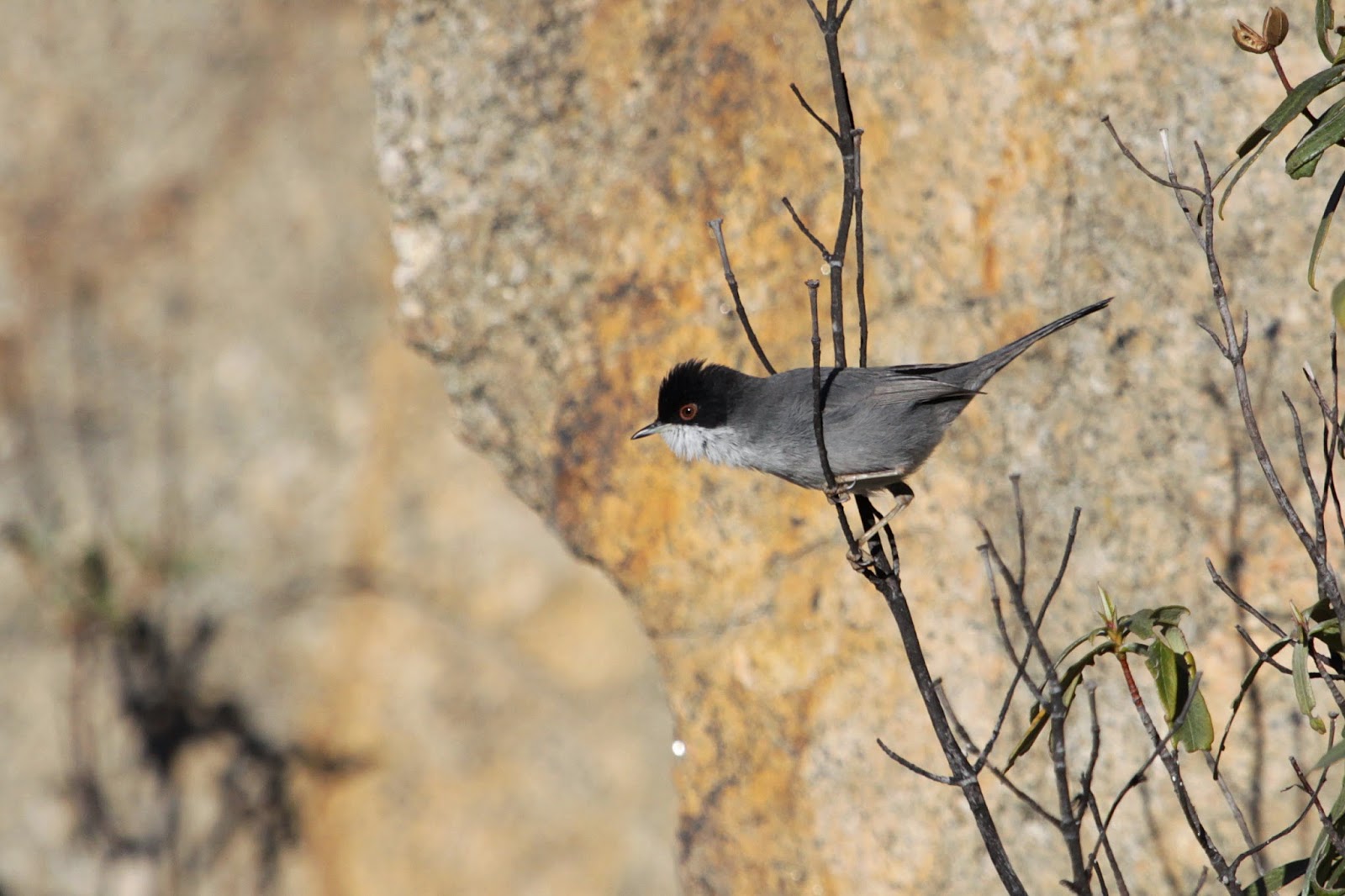 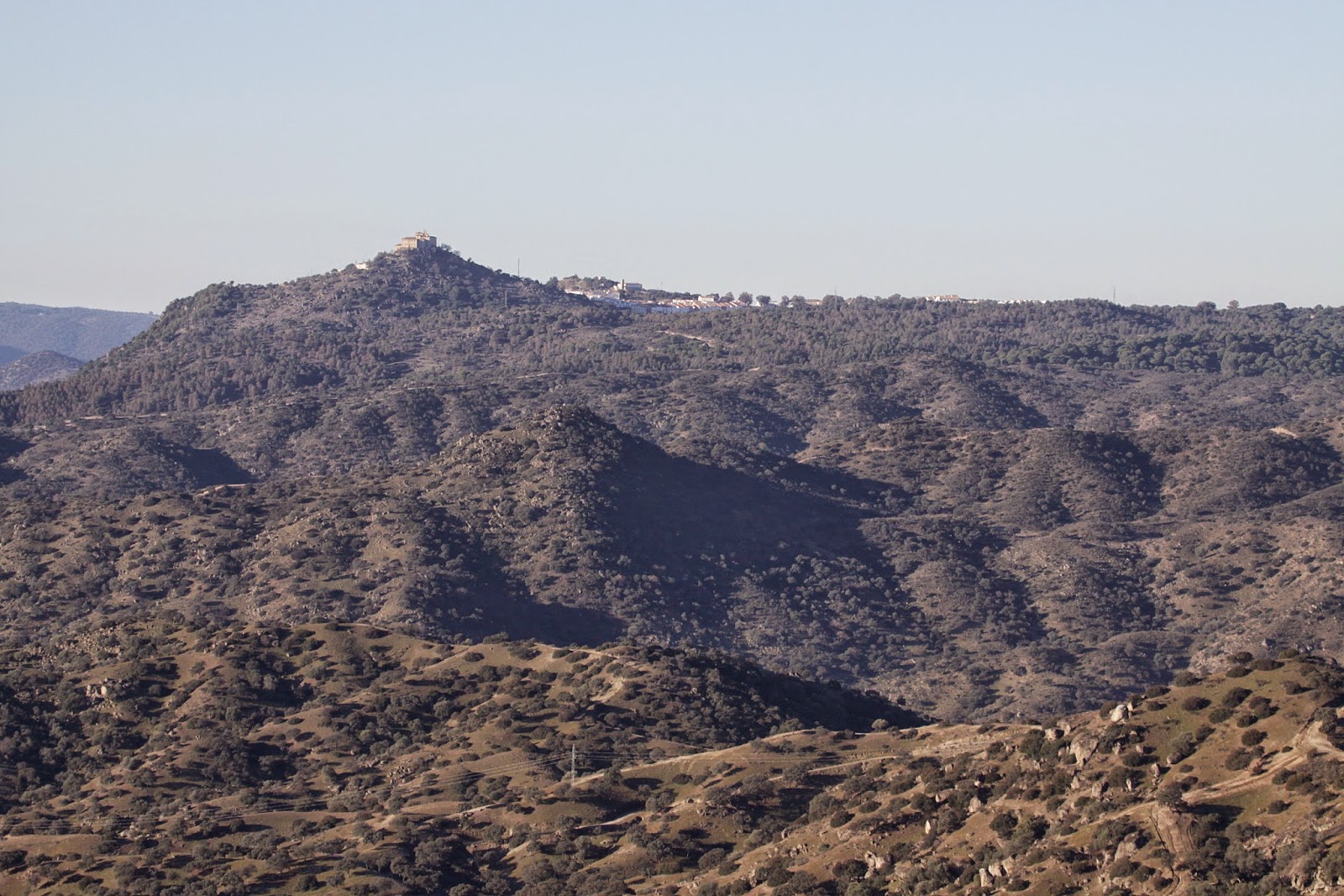 We were joined by other lynx hopefuls, but even with more eyes looking there was no sign of any cats by midday, so we headed down the road to the dam at La Lancha for a change of scene.  I am not good at staying in one place and waiting, which might explain why I have not seen many seabirds or mammals, both of which are well known as the rewards for those who patiently sit and wait.  I much prefer to go looking for things or at least to be doing something to try to find my quarry, otherwise I do get bored.  I would say I have child's attention span, but I am sure I was better at sit and wait when I was a child. 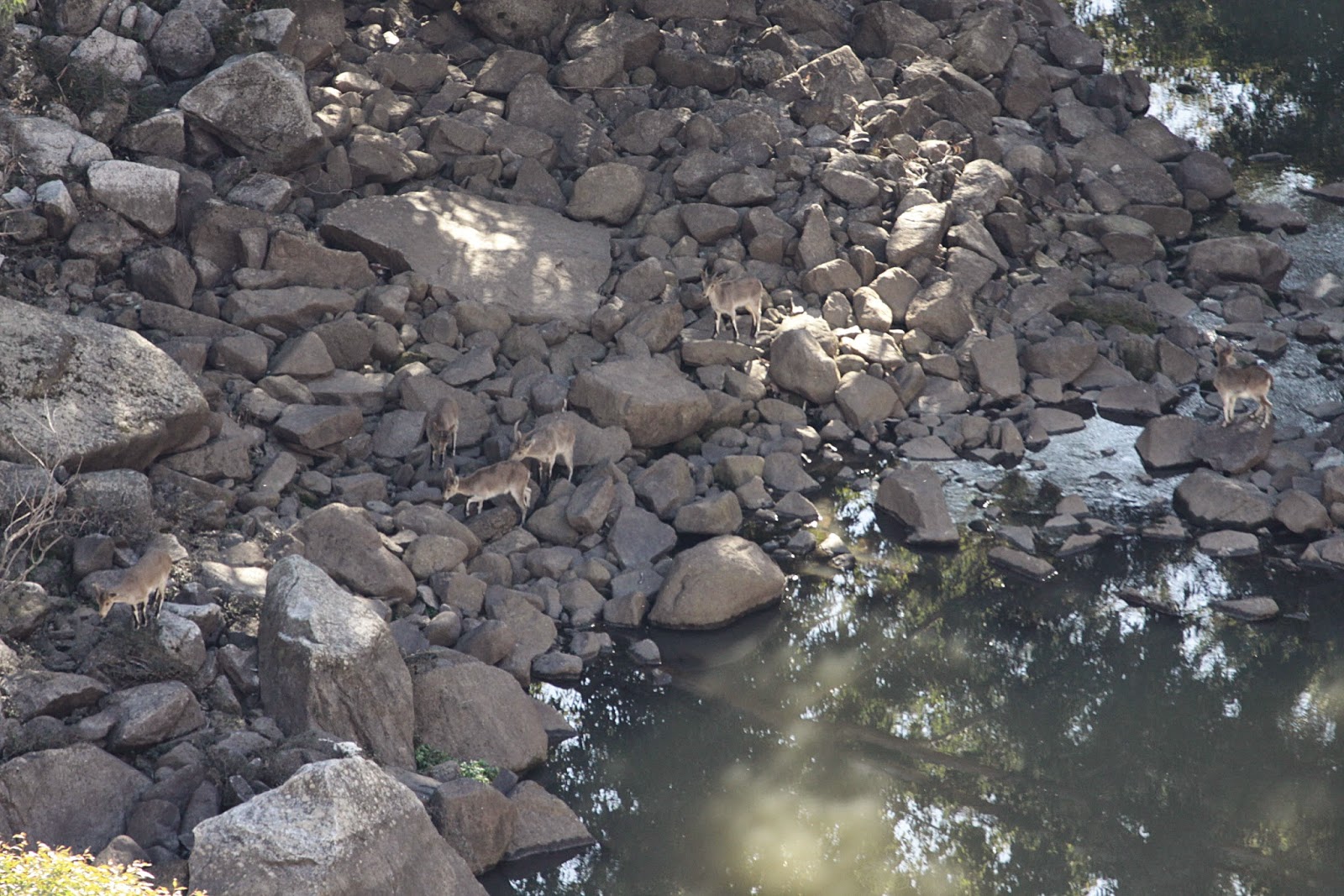 Down by the reservoir, Bex picked out a young Spanish Imperial Eagle flying along the far side of the river.  It was a tawny below, with pale patches on the inner primaries, and a white tail base above.  Just like the book said it would be.  Hurrah.  From the dam, we looked down on a party of Spanish Ibexes crossing the river.  When they reached the near side, three of them began play-fighting.  Or rather two of them did, rearing up on their hind legs, slowly leaning back in towards each other, then toppling and crashing down with a crack of heads.  The third, with bigger horns, seemed more intent on mounting the others.  The two fighters seemed unimpressed and undisturbed and to carried on their mock battle regardless. 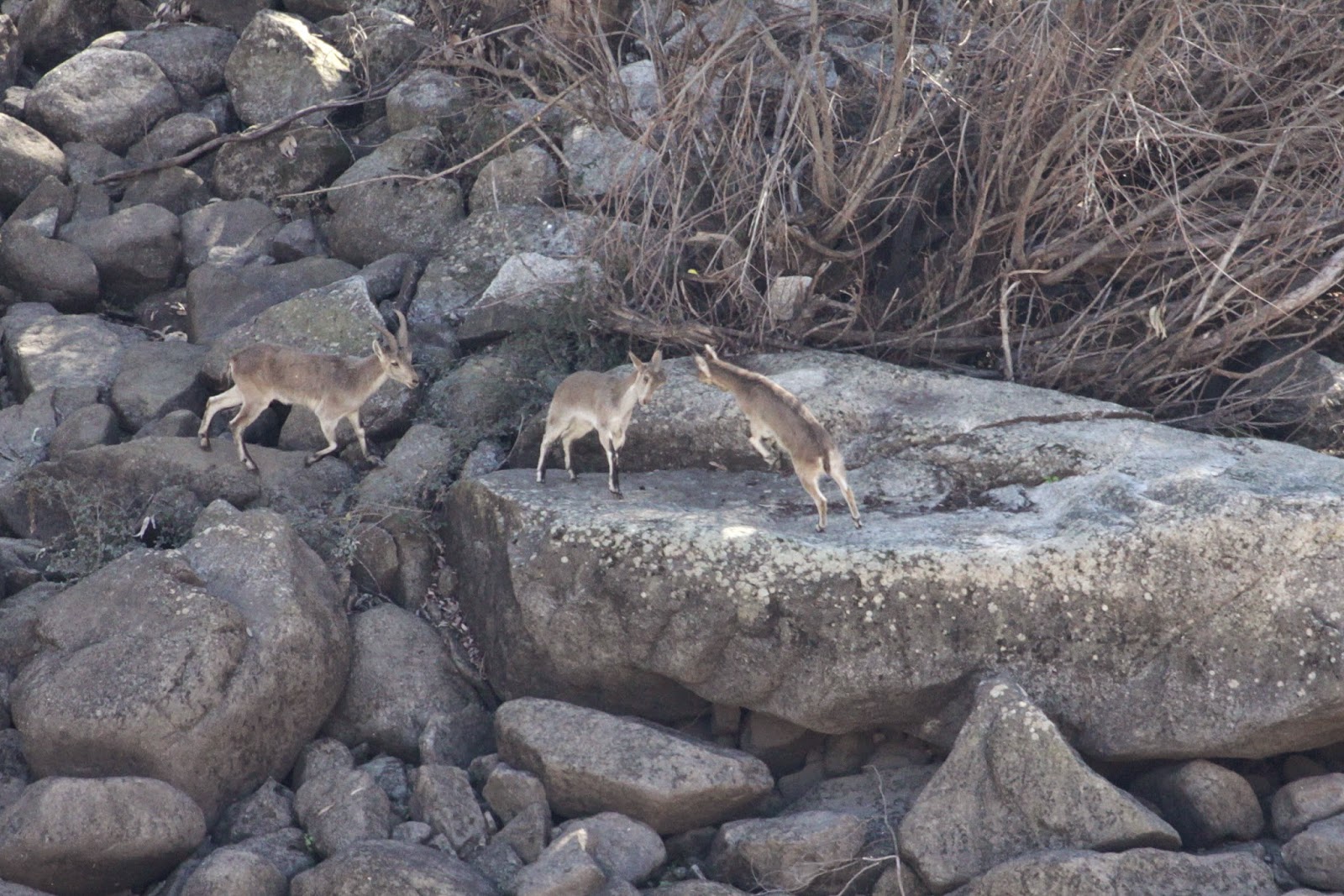 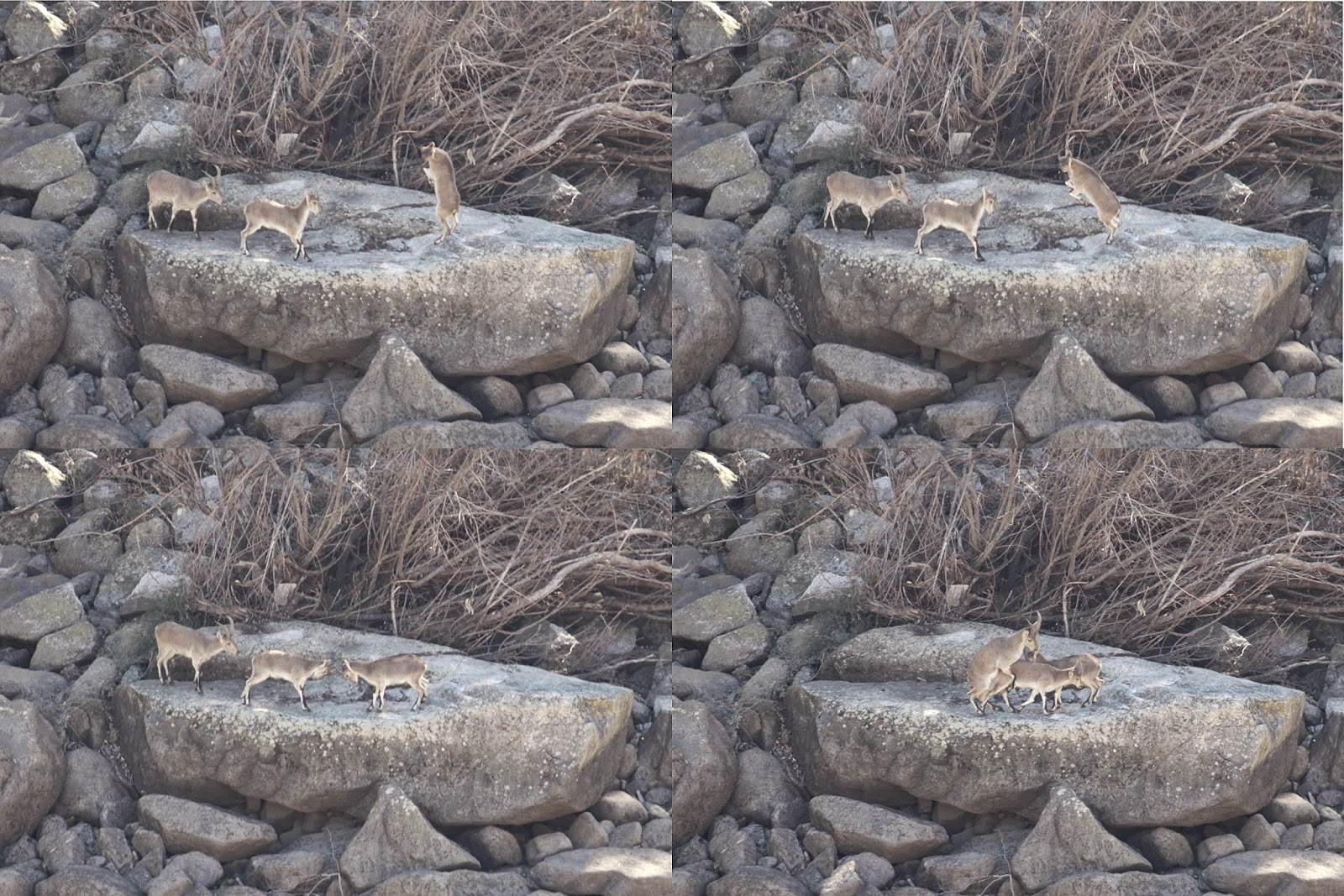 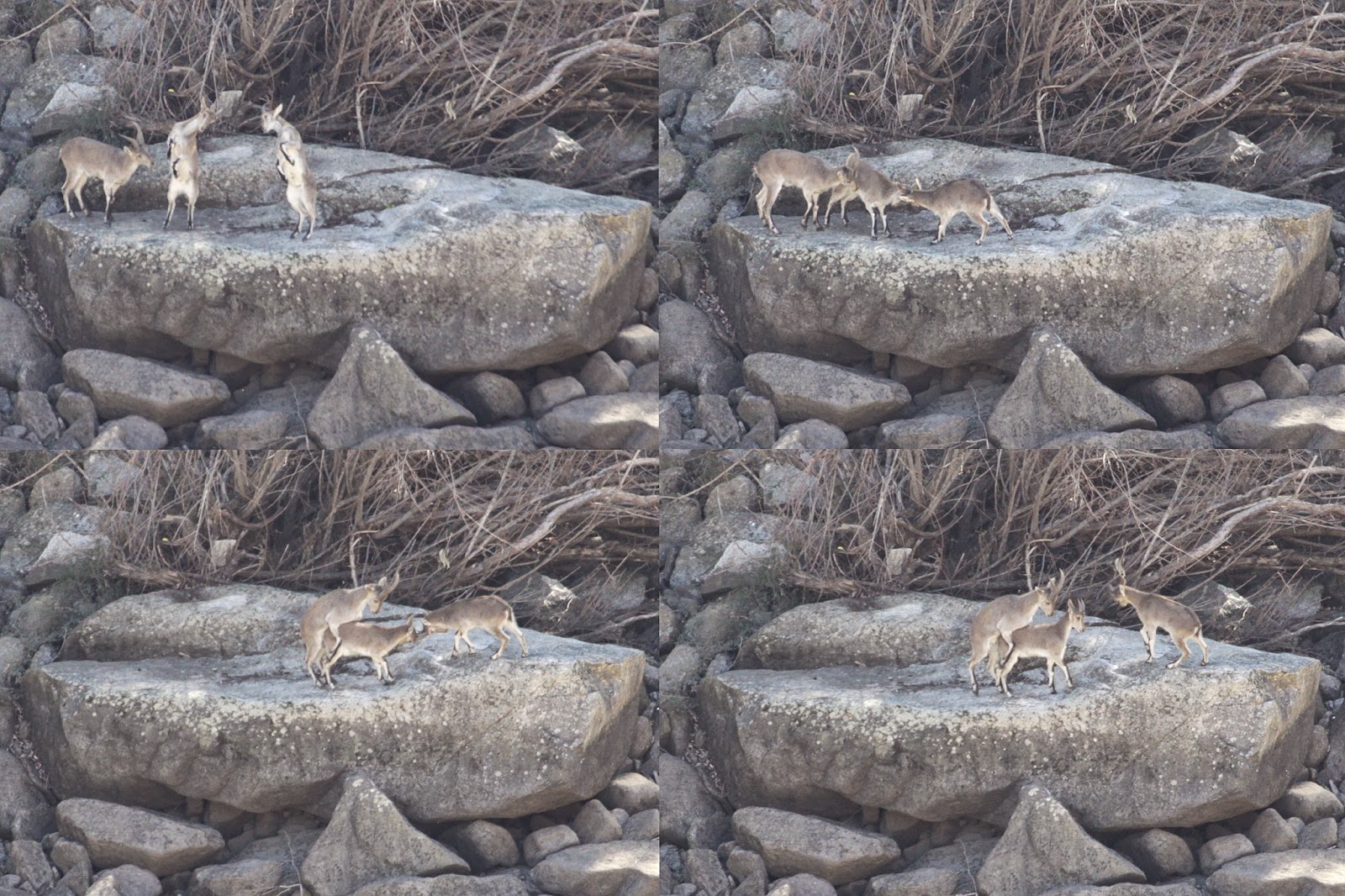 I assume that this entertaining and endearing spectacle gives them some practice at the things they will need to do under more testing circumstances later in life.  As well as being fun.

Back at the lynx track, I was pleased to find out that we had not missed anything.  The Mouflon had come a little closer, and a Spanish Imperial Eagle flew around, with bright white shoulders, just like the book said it should have. 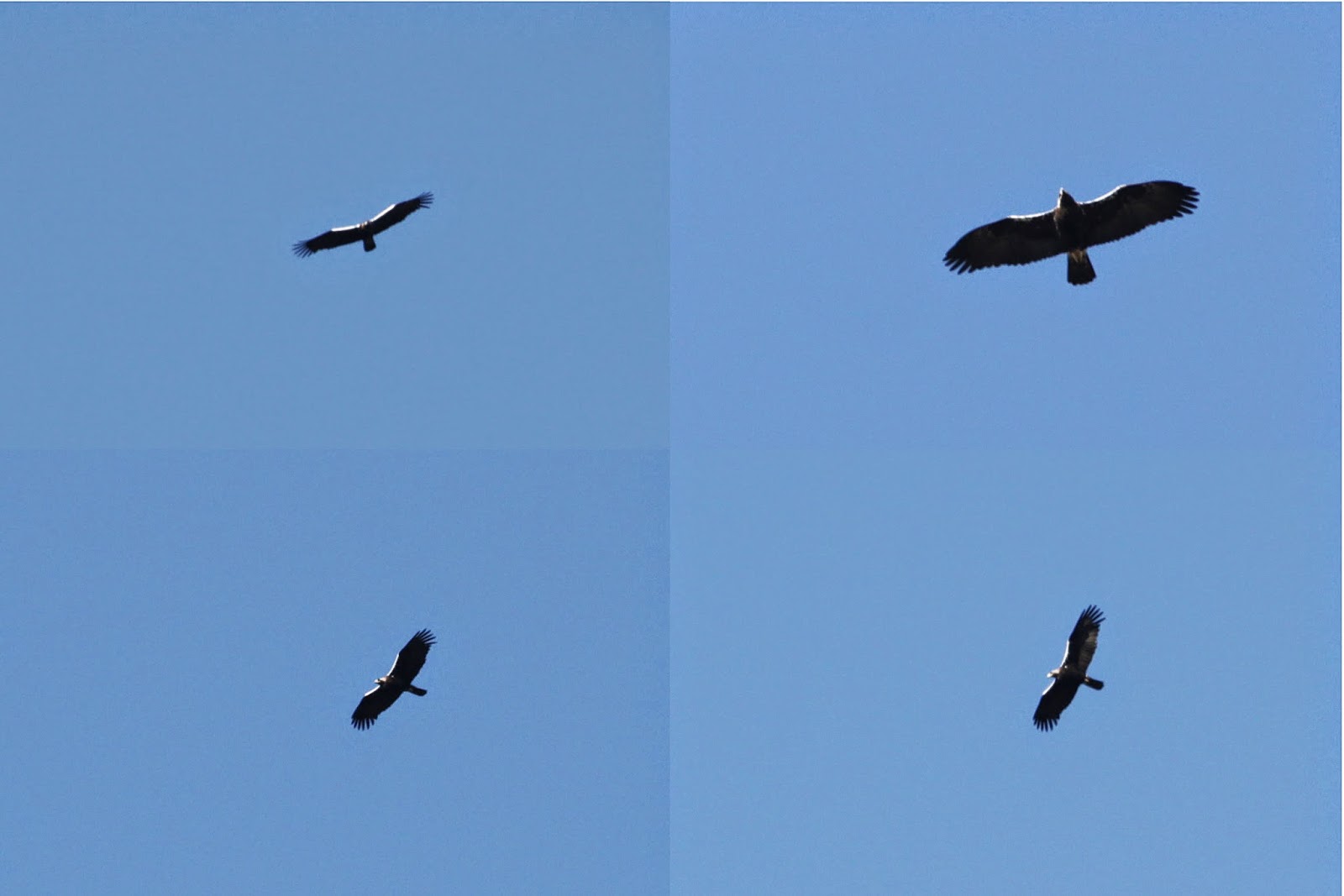 At about 1600, there was a clicking of fingers from down the track: one of the tour guides had glimpsed a lynx.  It had gone out of sight, but we knew where it was heading, so we kept scanning.  At about 1800, someone saw it again.  That was a long time for a lynx to stay hidden.  Unfortunately the person who know knew where it was was not helpful with directions, saying nothing more than 'está en el matorral' whenever he was asked where he was looking.  Reference to the photos above will demonstrate that 'it is in the scrub' is not a very useful reply when the entire view around you consists of scrub-covered hillsides.  The lynx disappeared again and by now the sun had gone behind the hill and the light was going.  Dammit.  About ten minutes later, we got a second chance, this time from someone who was able to say something a bit more descriptive, and I found myself looking at a brown, black-tailed, ear-tufted, long-legged cat strutting up the hill and slinking away around a large rock.  I had seen my first wild cat [this sentence is a lesson to anyone who thinks that species names should not have initial capital letters: you are wrong].  Bex saw it too, so we were now free to enjoy the rest of the week exploring, and measuring as many daffodils as we cared to.
Posted by Mark Gurney at 20:19