In search of the wild 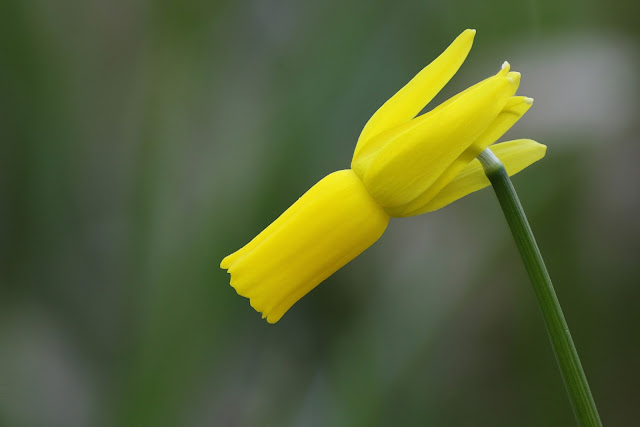 There is something right with the world if you have a Firecrest singing outside your bathroom. My first morning in the rainiest part of Spain was dry, bright, and sunny. I had fortuitously arrived with the first warm days of the year, even though my timing had nothing to do with the weather. A few weeks ago I was I was planning an early expedition in search of a delightful daffodil in Galicia. Then some cat pictures got the better of me and I was diverted to Andalucía. Now I was back on track for an encounter with Narcissus cyclamineus.

The second week of March appeared to offer the best chance of catching the last of this early flowering daffodil, and the first of a couple of later flowering ones. It also offered a chance of being too late for the one and too early for the others. However, this morning was full of promise, so I headed south in search of two species that I knew grew by the Praixa Fluvial at Melide. It was there that I saw Narcissus cyclamineus under trees on top of the river bank, accompanied by Narcissus asturiensis and one Narcissus bulbocodium. The site is a riverside park with sun loungers and paddling pools, and it looked just like any park that has been planted with cultivated daffs. This was not how I wanted to encounter a plant that was supposed to be a lost treasure. It felt like a jewel of the Iberian flora had become a cheap trinket in an urban amenity planting.

I needed to see my plants somewhere a bit more wild, so I decided to test what I had been told by some Galician botanists: that I could find cyclamineus along any river in the south of the area. On the map I could see that about 5km away the road came close to the Río Furelos again, so I chose this as my first stopping place. It immediately looked promising. Eucalyptus plantations have taken over much of the land here, but where they meet rivers, there is often a narrow strip of oaks and poplars with a woodland field layer. As soon as I got out of the car I looked down the slope and across at the far side of the river through my binoculars. There I immediately saw the unmistakable yellow tubes of Narcissus cyclamineus. 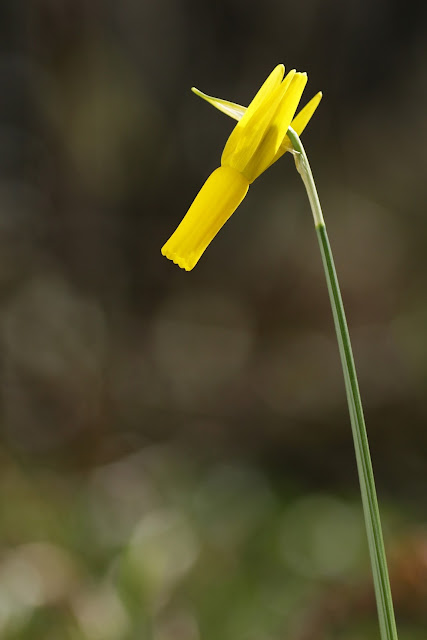 Narcissus cyclamineus is an outstanding daffodil. It is unlike any other species. For one thing, it is identifiable, as I found out today, from at least 30 metres away if you have binoculars. It reminds me of a giant yellow cranberry, with its spiky swept-back petals and its long beak-like trumpet. If you asked me to draw you a cartoon of a daffodil in a wind tunnel, it would look like this. It is a plant of wet places, and riversides seem to be where it is most at home. Here it was growing under ash Fraxinus, oak Quercus, and poplars Populus among the ubiquitous brambles and Wood False-brome Brachypodium sylvaticum. Primroses Primula vulgaris and Lesser Celandines Ranunculus ficaria kept it company. A little further upstream I found more clumps of it, plus one Narcissus minor subsp. asturiensis and one Narcissus bulbocodium.

A walk down to another part of the river took me along a track covered in tiger beetles, very active in the heat of the sun and ready to fly. There were no daffodils on this stretch, but so far I had a fifty percent success rate. By the end of the day this had turned to sixty percent. The last stop was in a particularly brambley thicket down a very steep bank below the road. Waiting at the bottom of the bank there was a small stream and a lot more bramble, but in the gaps and under the arching thorny stems were thousands of golden yellow tubes on stalks, glowing above the dark, quaking silt of the woodland floor. An uninviting, unfriendly, and unremarkable location; this was no park planting. 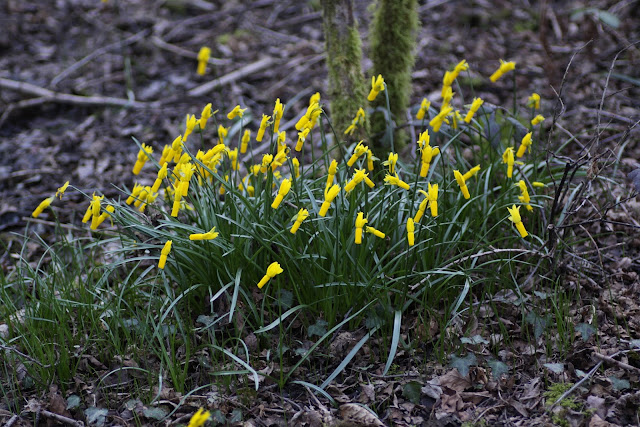 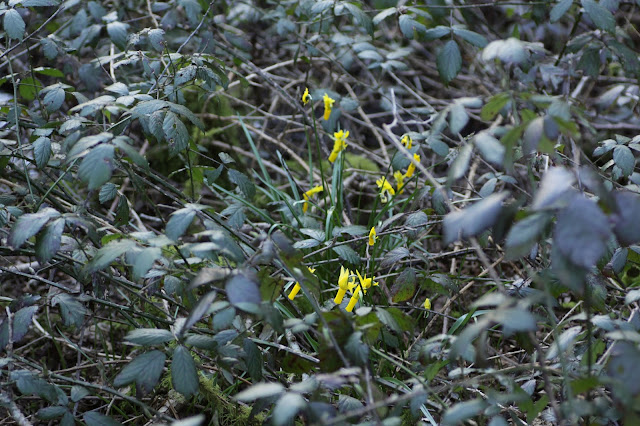