Narcissus asturiensis is an odd plant in Galicia. Throughout its range, which extends east into the Picos de Europa, we are told it is a mountain plant. Flora Ibérica says (50) 1000-2150 m. In Galicia, it is found in montane woods and pastures, but also along rivers at much lower altitudes, as I found yesterday. Today I went to look for it in its highland home. Not far out of San Román, it appeared on the side of the road at the edge of a wood. As is often the case, I spent some time admiring the plants here in case I saw no others, only to find them in abundance over the next 10 km of road, often in grass, sometimes under pines, and occasionally next to late-lying patches of snow. It was as though they were following me all the way to Piornedo. 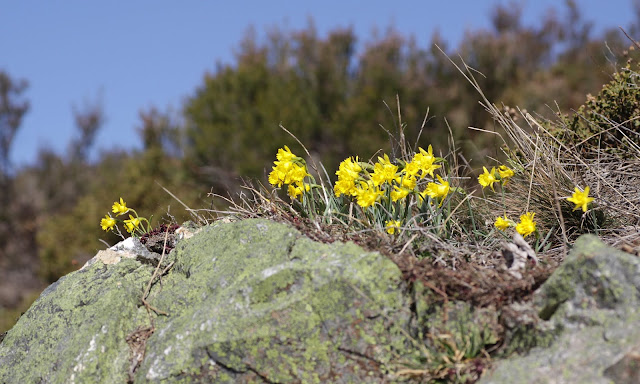 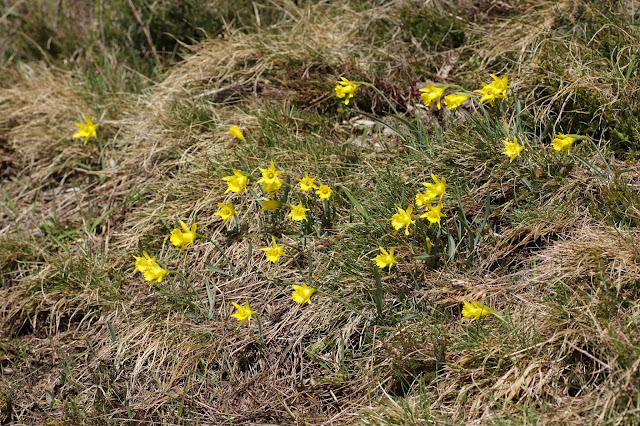 I did not make it to Piornedo. Just outside of Degrada I was passing a bank where, judging from the flattened grass, the snow had not long melted. I was now accustomed to Narcissus asturiensis and Primroses Primula vulgaris on the roadsides, but I was startled here by the unmistakable image of Erythronium dens-canis, a plant I thought I would have to look hard for. It is like a shocking version of Narcissus cyclamineus: no modesty or subtlety here. It shares the swept-back petals, but they are garish pink-purple, like a black cherry yoghurt. At the base, a halo of white surrounds a star whose rays are yellow or dark pink or both. Unlike the daffodils, Erythronium does not hide its reproductive parts under a skirt. Brazenly waving from the mouth of the flower are six tentacle-like stamens, each topped with a deep blue anther, and in the middle a long forked snake-tongue of a style sticks out defiantly. The leaves are blotched with morbid black-purple. If it were three metres tall, it would not make a bad model for a triffid. 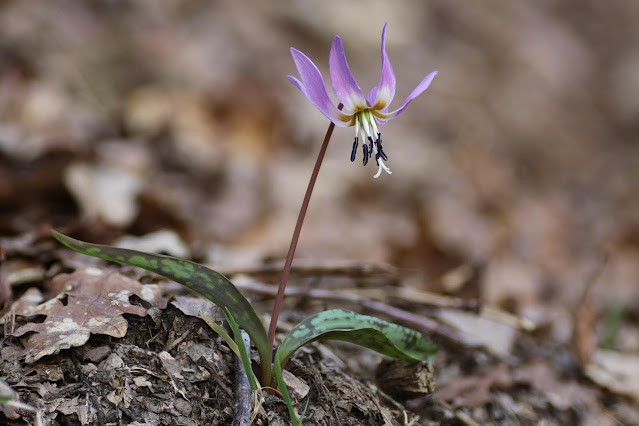 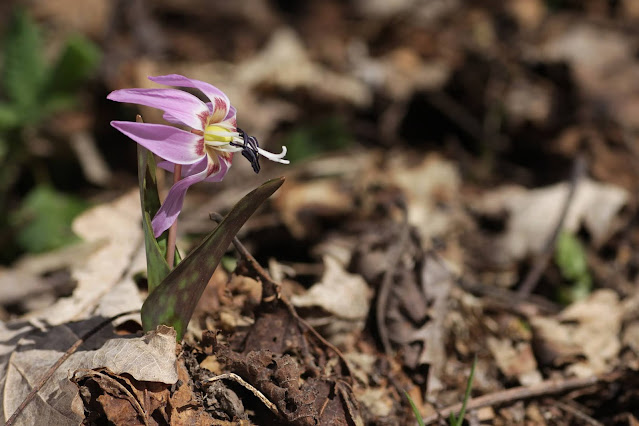 There was of course more Erythronium further along the road. Having found the two star plants I was hoping for, I began exploring the woodland. A trail took me a short way into a Hazel and Holly wood, where Erythronium and Narcissus astureinsis grew by the path. Stinking Hellebore Helleborus foetidus was with them. This seems to be a common plant here; I had noticed it in the woods as soon as I left the motorway and started on the winding roads through the hills.

At the bridge over Río do Ortigal I followed the track, still covered in snow in places, as it climbed up through oak woodland, with more Holly and Hazel. Narcissus asturiensis was still here, but it was scarce except in small clearings or where the trees were less dense. Like daffodils in British woods, it seems to do best where it gets a bit more sun. The field layer in more shaded parts had Bilberry Vaccinium myrtilis, Great Wood-rush Luzula sylvatica, Bramble Rubus fruticosus, Stinking Hellebore Helleborus foetidus, and a few shoots of Spurge-laurel Daphne laureola, with Opposite-leaved Golden-saxifrage Chrysosplenium oppositifolium on wetter ground. The north-facing pastures below the track were still covered in melting snow, its water flowing down and soaking the sunnier fields below. There were thousands of large daffodil leaves here, Narcissus pseudonarcissus subp. nobilis by report, but the plants were still a long way from flowering. By now the sun had left the valley in shade, so I made my way back round to Degrada to try to catch the evening light on the Erythronium before starting the drive back.
Posted by Mark Gurney at 22:30