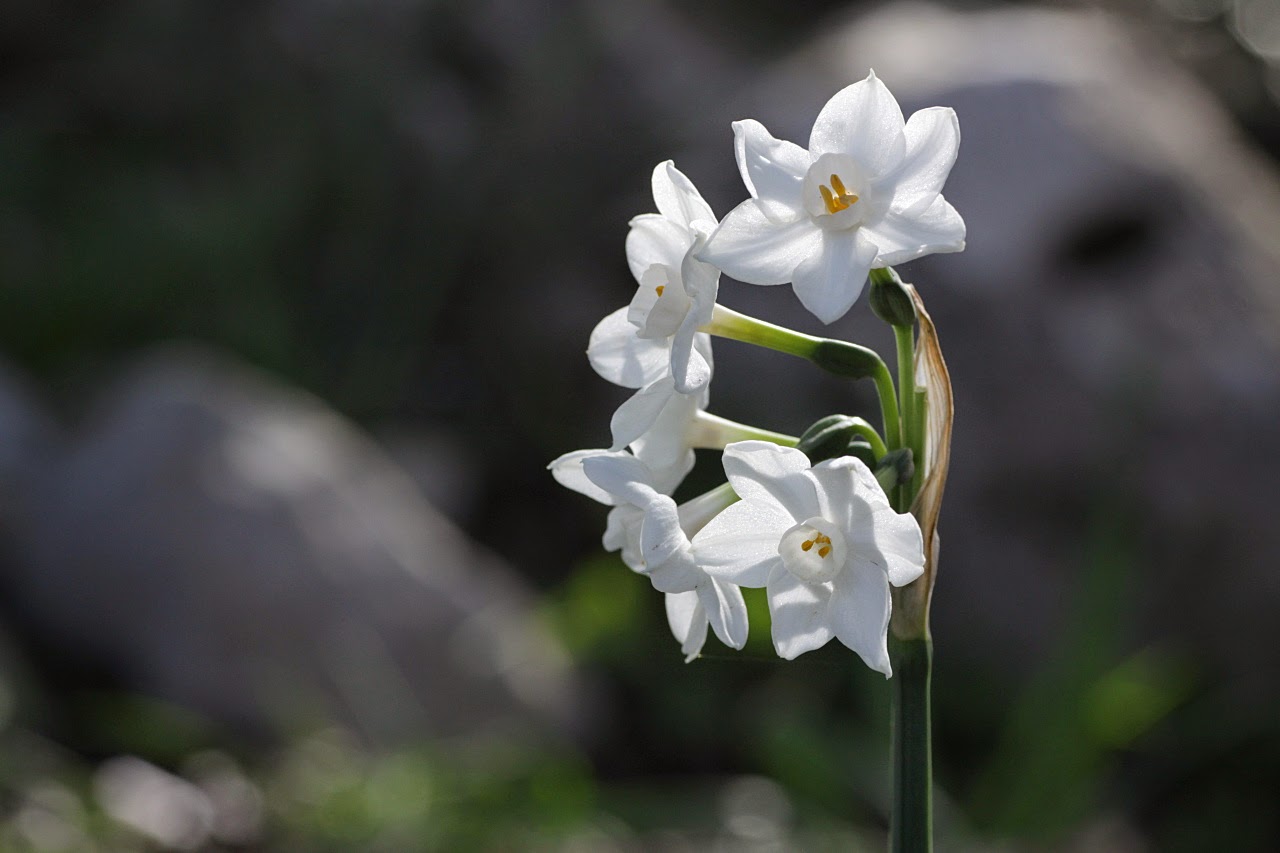 On my last full day I drove back through the cork oak forests to Grazalema and on to Benoacaz to the Salto del Cabrero trail.  From the edge of the village a narrow path passes goat pens and oak woodland before emerging on a pasture with many orchids and a carpet of Narcissus papyraceus along the side of a stream.  The Paper-white Narcissus is a good English name for this flower, which looked particularly delicate and papery in the dappled shade under the oaks. 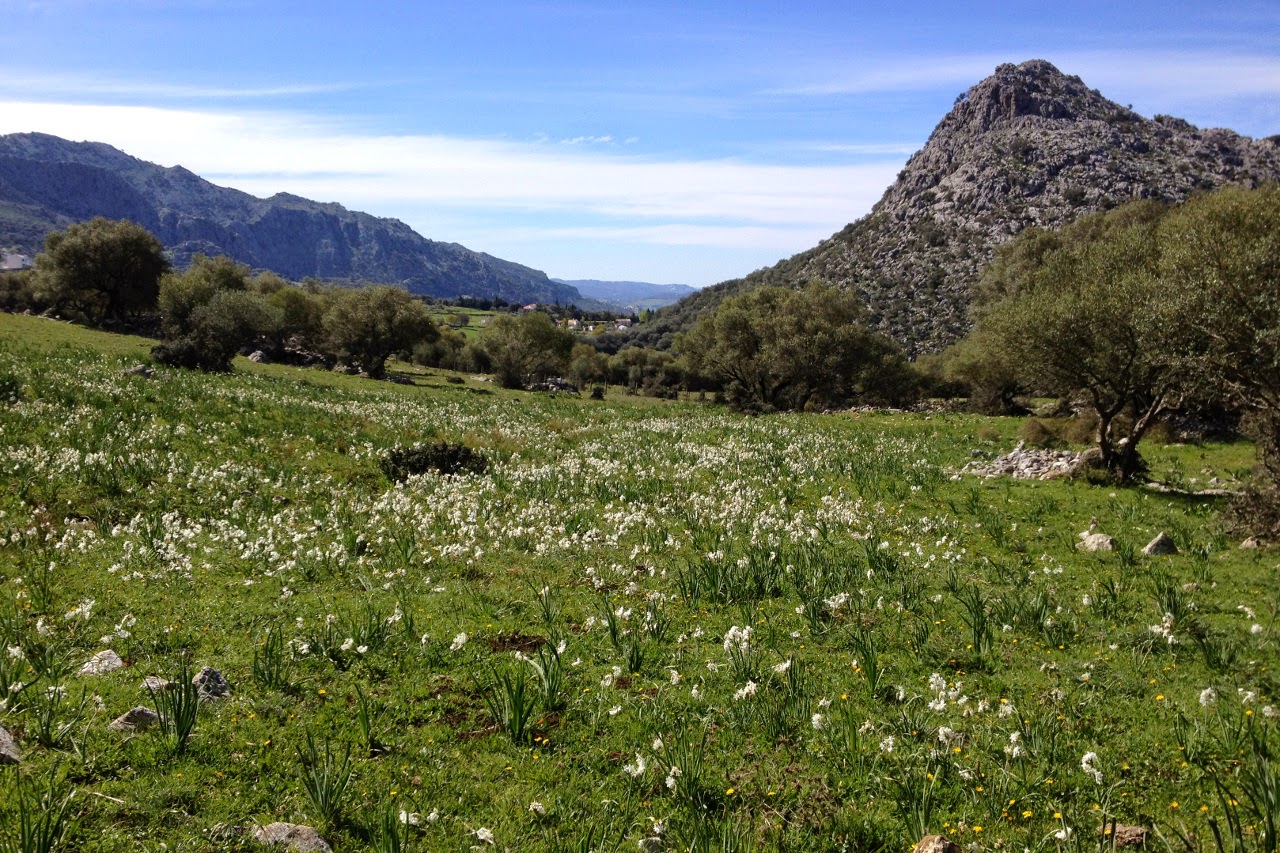 Ophrys tenthredinifera and Ophrys fusca were here in good numbers, and Spanish Festoons cruised over the meadow. 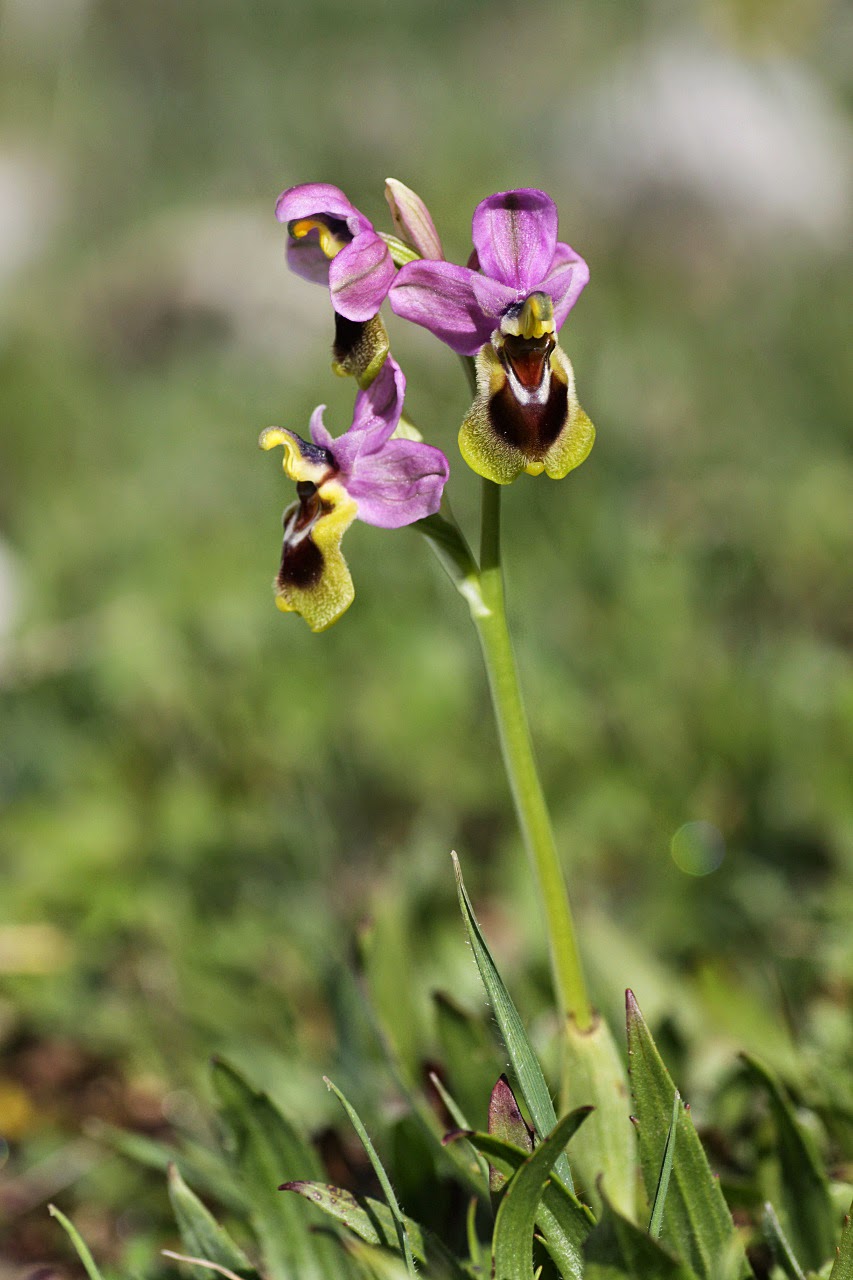 On the far side, the trail and I climbed up the rocks to the pass above.  It is easy to ignore crucifers; a lot of them are rather similar, and to me there is something about the form of their flowers that is not as pleasing as those of many other plants.  Perhaps they a little ungainly.  However, Biscutella baetica caught my attention here because of its unusual fruits: two flat discs joined together like a pair of cartoon eyes. 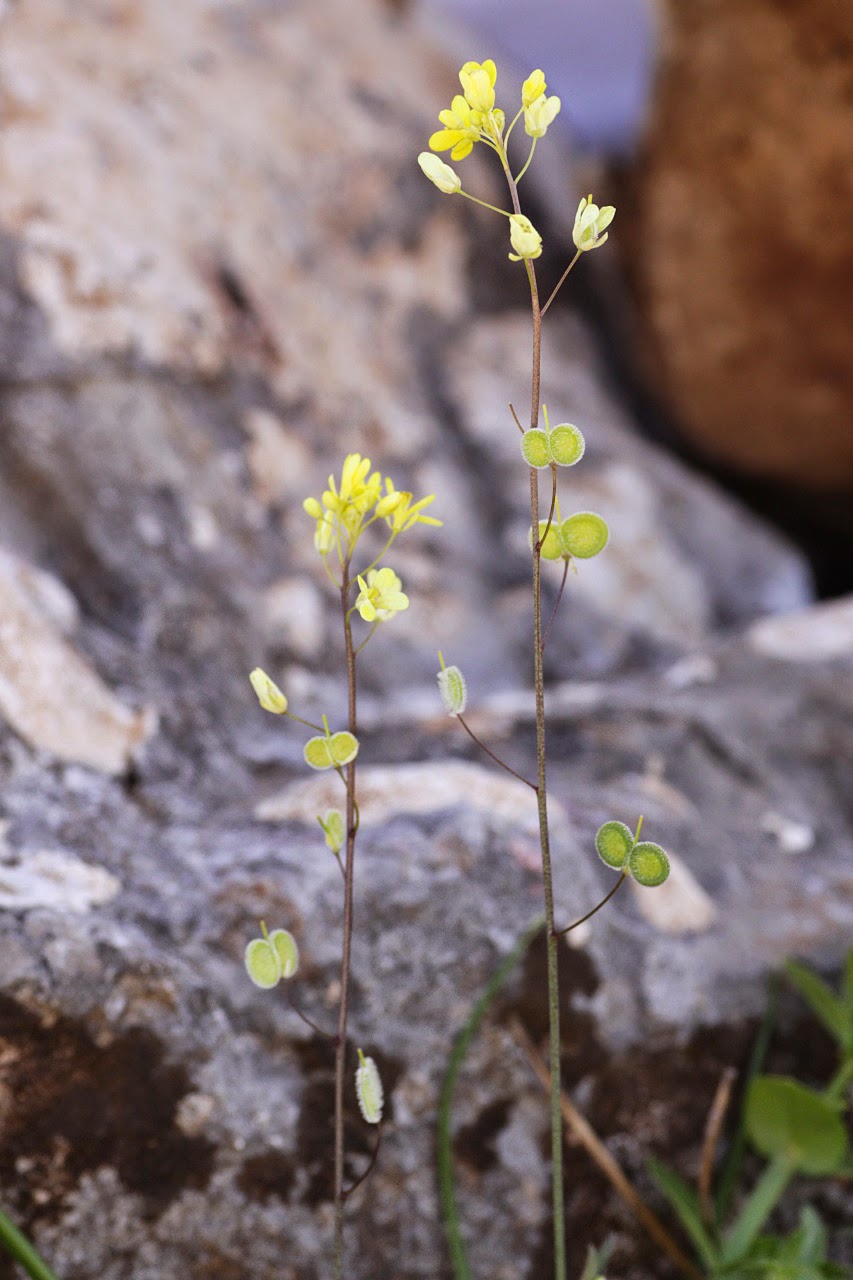 I approved and moved on until a bright red bug brought me to another stop.  Thanks to the helpful guide by Luis Vivas, I was able to identify it as Spilostethus pandurus. 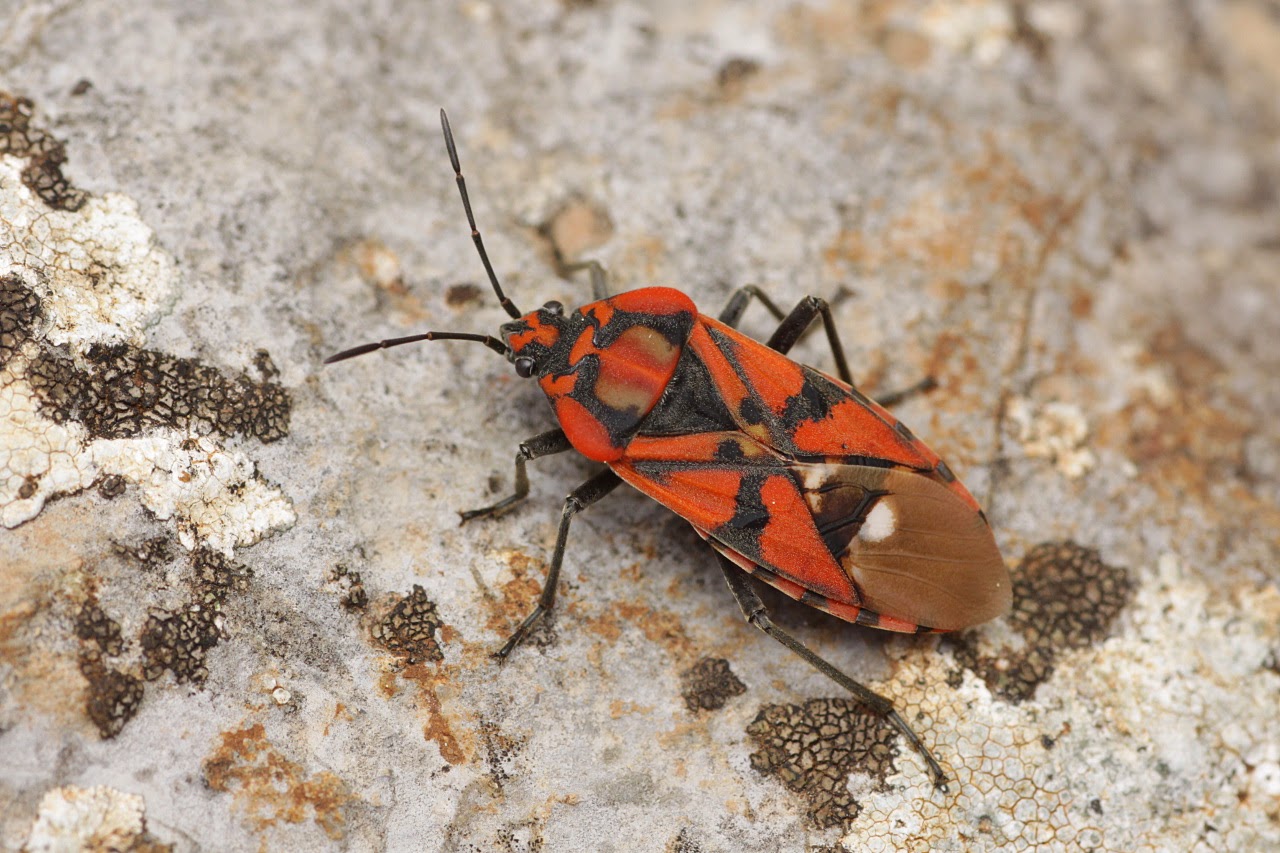 I had lunch while listening to a Black Wheatear singing from a nearby boulder while Griffon Vultures flew to and from the crags, then I headed back down and across the pasture just as the goats were heading out. 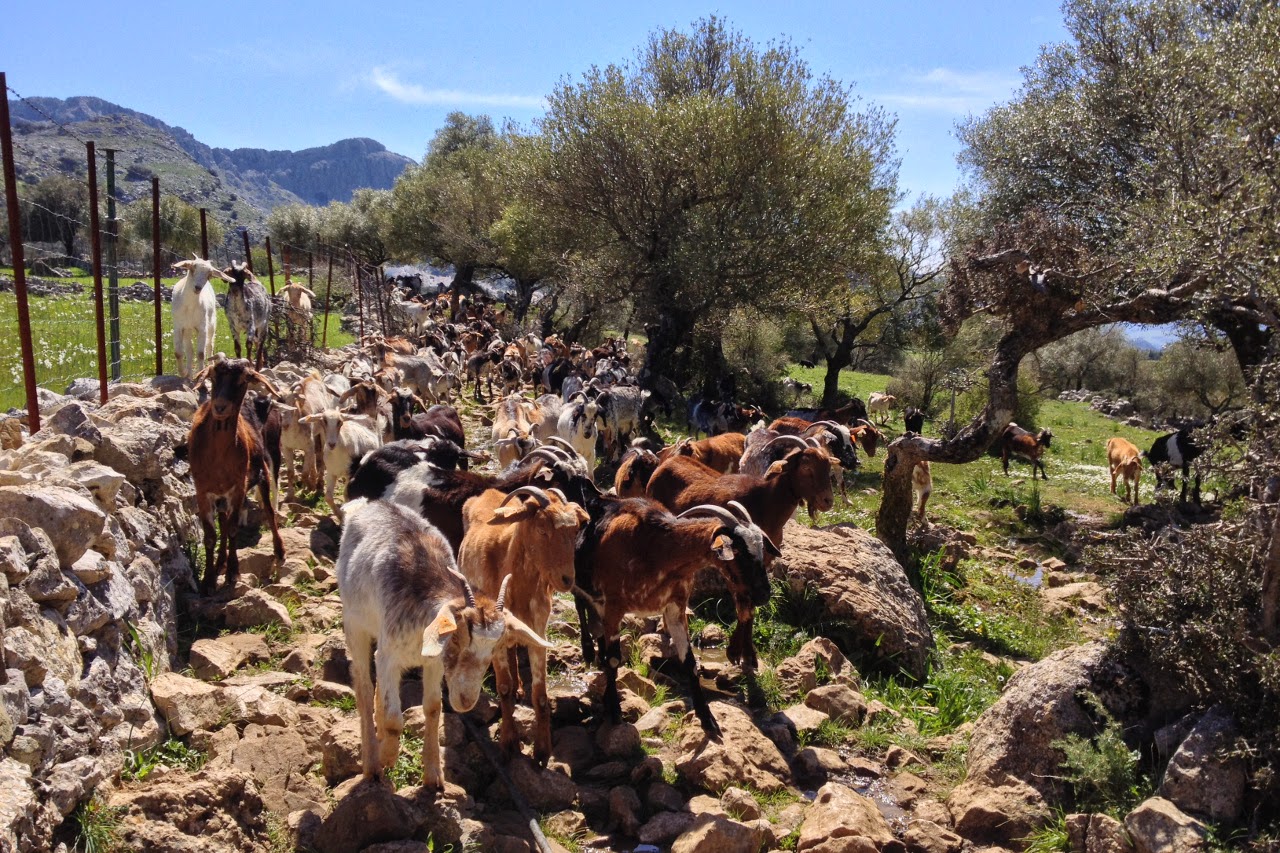 As I drove to Benamahoma, I noticed a group of naked men on a stalk so I immediately tried to find somewhere to pull over so I could stop for a better look.  After a short walk back along the road I reached the site where there were many Naked Man Ocrhids Orchis italica.  Closer inspection revealed that the little figures at the top of the stalks were not only naked but very clearly male, and well endowed males at that.  Victorian ladies would probably have found the plant too much. 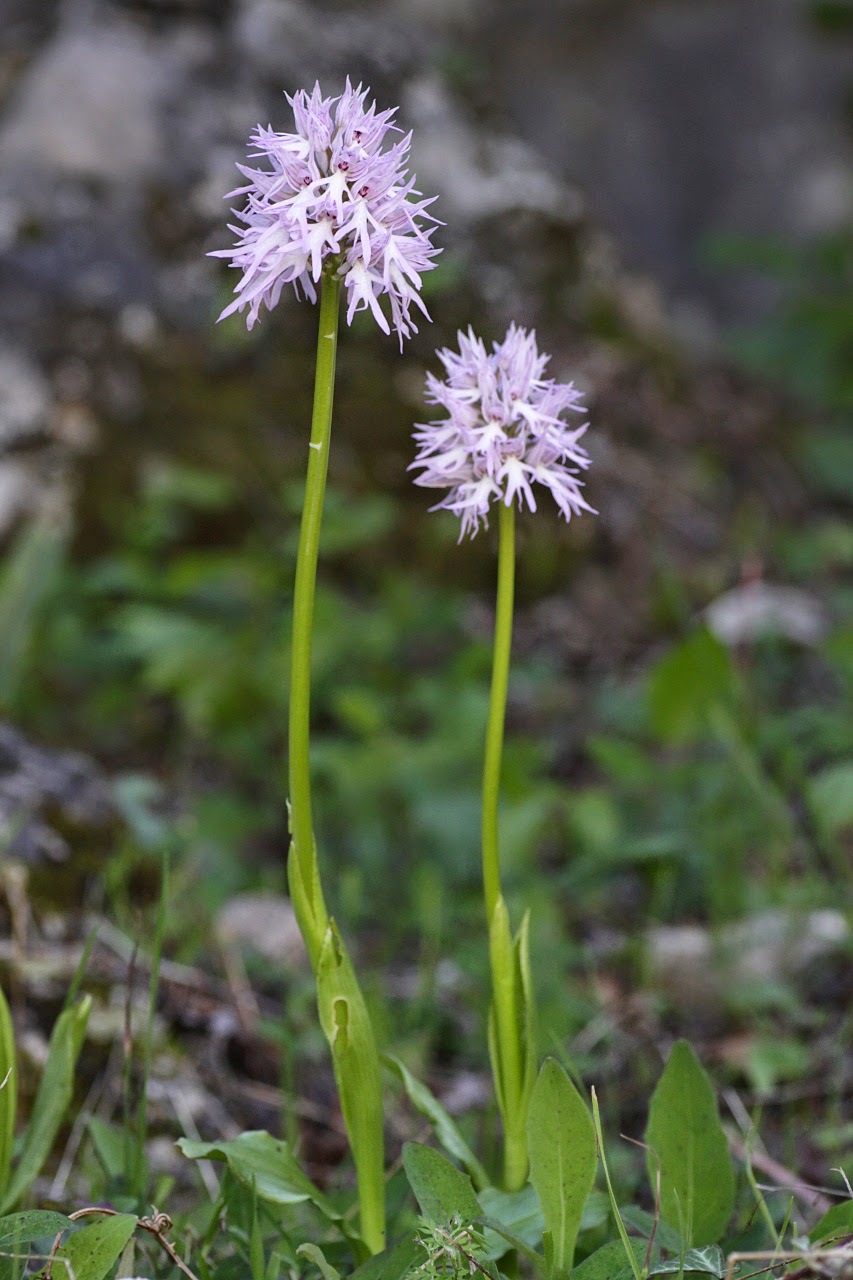 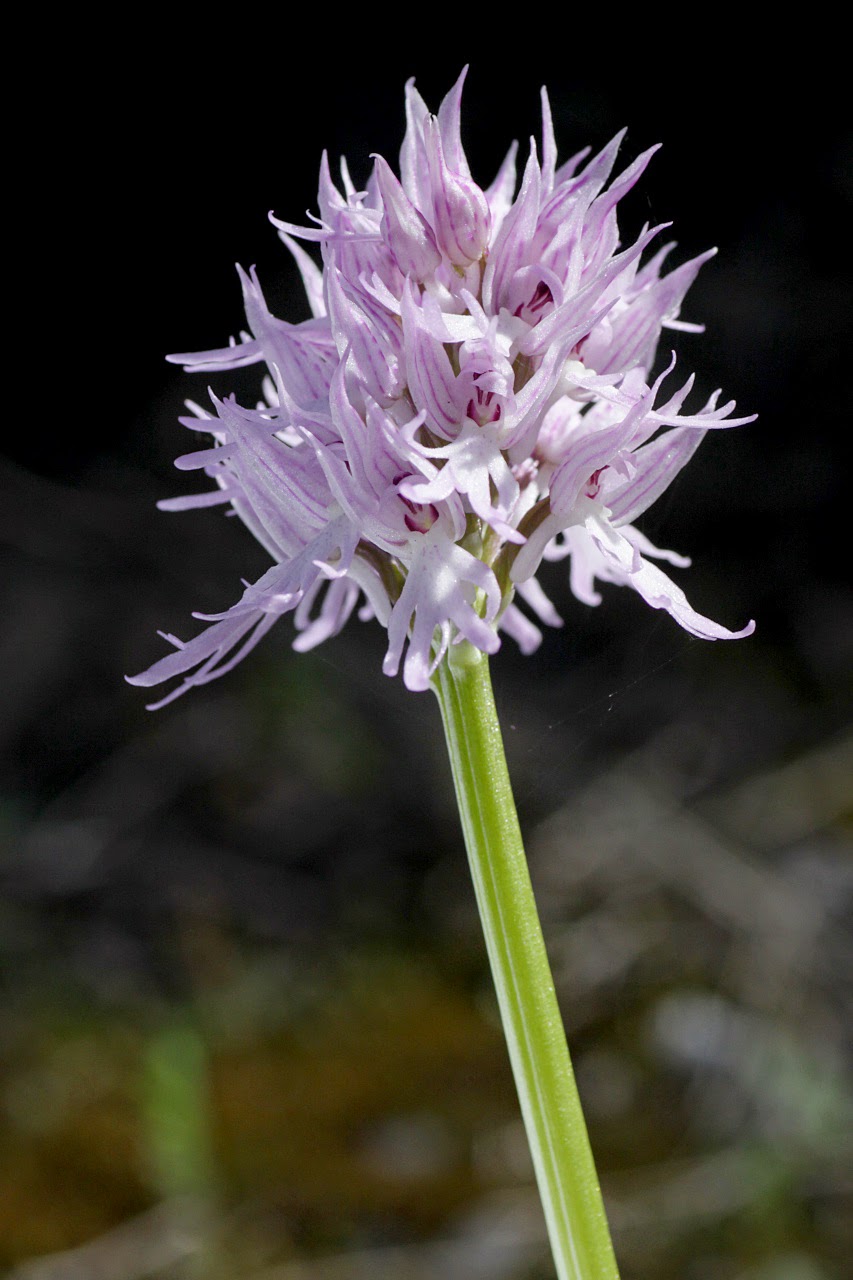 Most of the orchids were in grassland, but some were growing under oaks, where they were joined by Spanish Bluebells Hyacinthoides hispanica and Narrow-leaved Helleborines Cephalanthera longifolia.  The latter is a plant I have not seen in Britain, where it is much scarcer than White Helleborine Cephalanthera damasonium.  Floras often make a meal of telling them apart, suggesting that you need to decide whether the leaves are ovate or ovate-lanceolate, as if that were helpful, but they are distinctive plants: Narrow-leaved has short bracts, so the inflorescence arises abruptly from the leaves and towers above them; White Heleborine’s bracts are much longer and make the flower spike look like a leafy continuation of the rest of the stem. 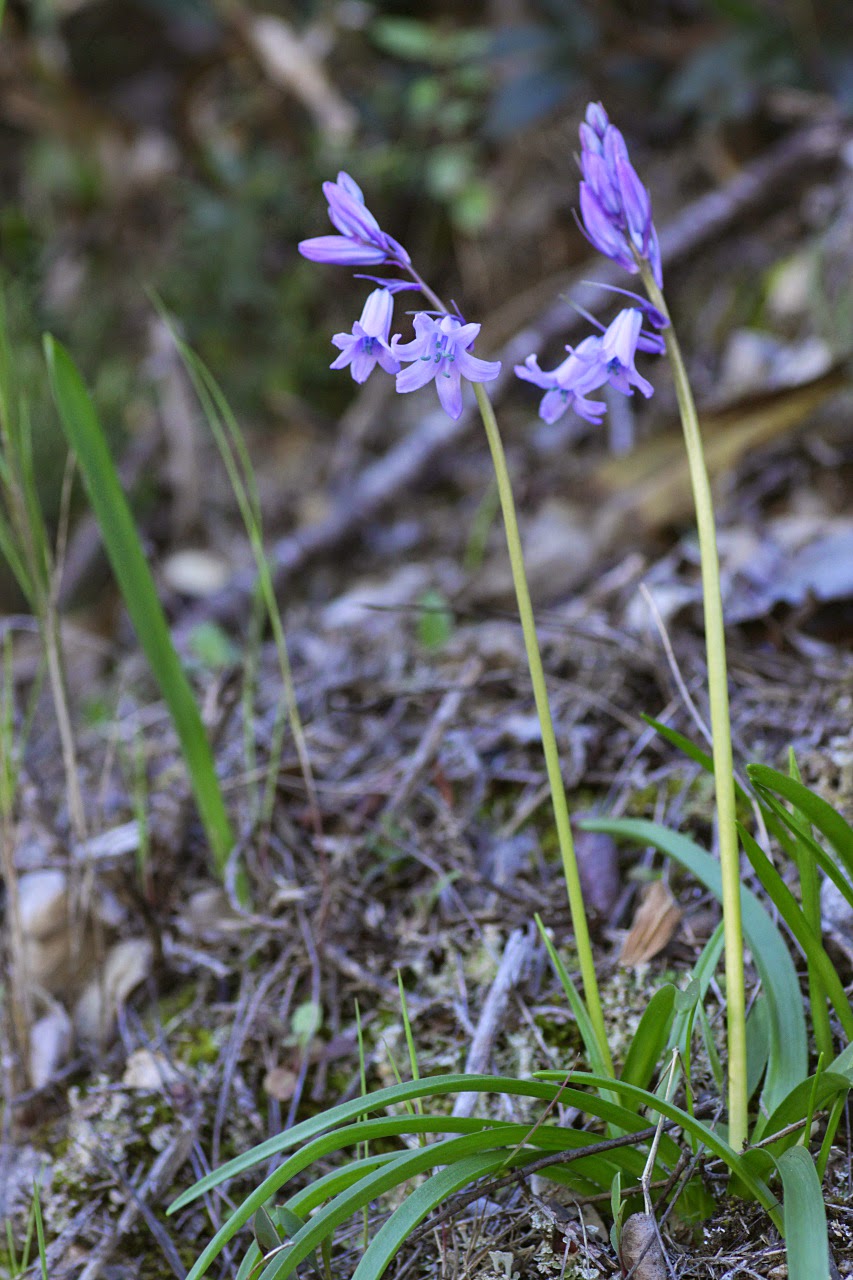 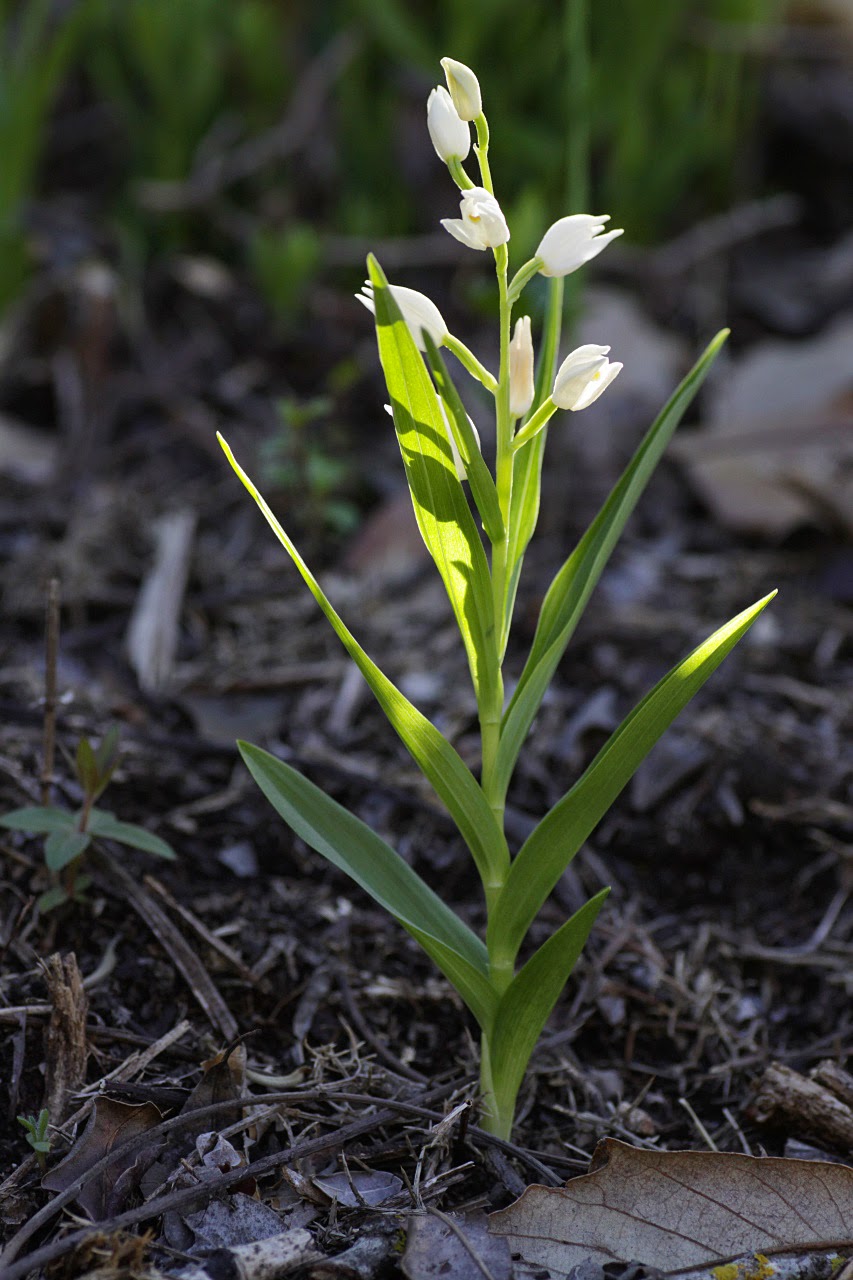 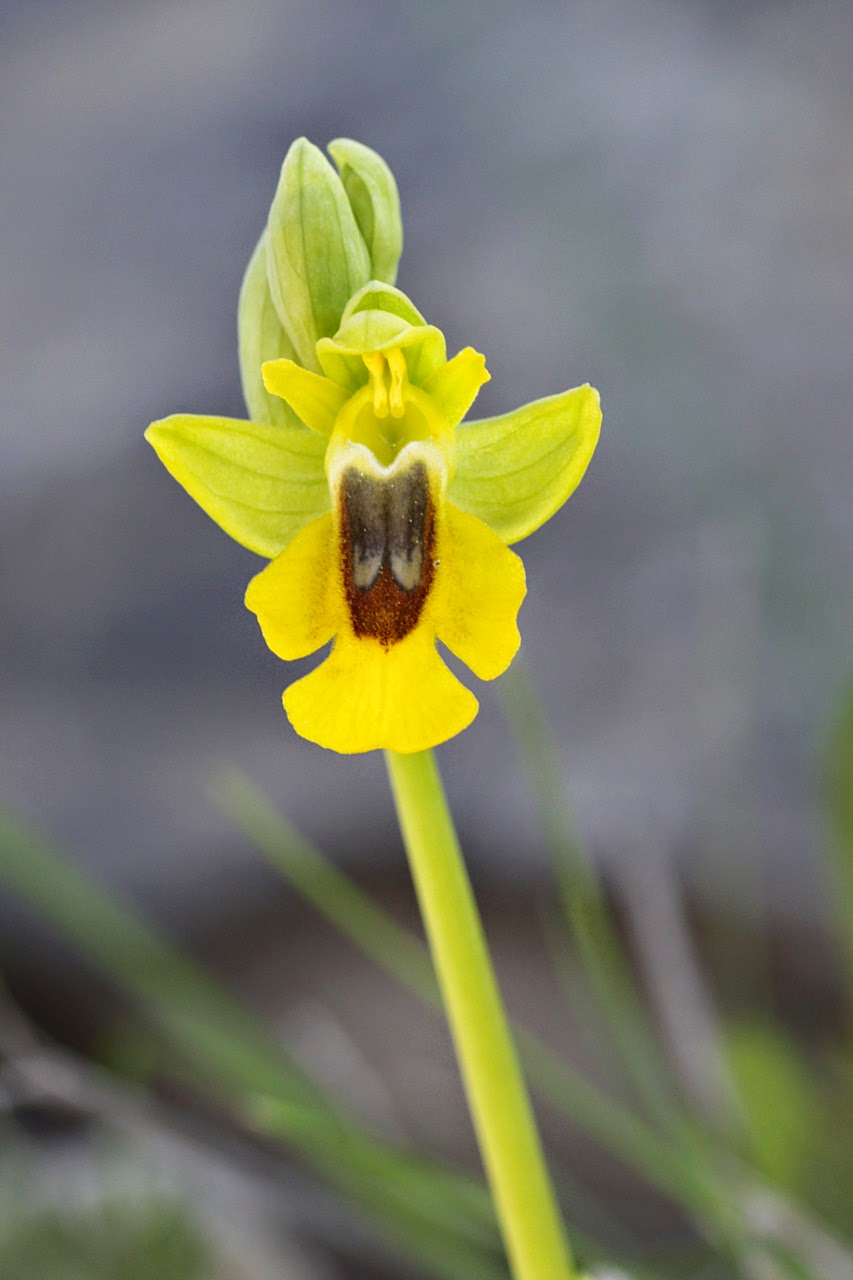 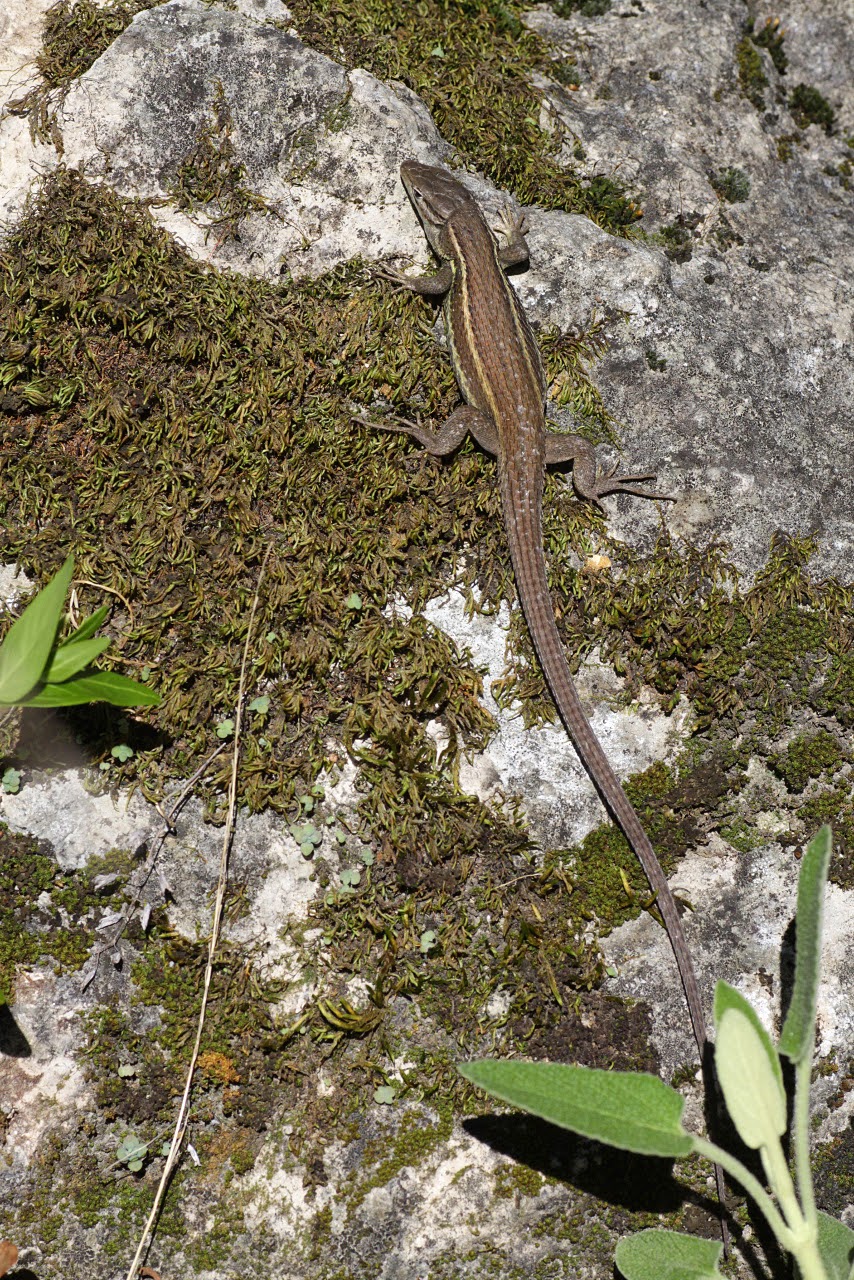 Back at my car parking spot Ophrys lutea was flowering; the bright buttercup yellow border was striking even from a few metres away.  I left the car here and walked down the road to the start of the trail along the river. 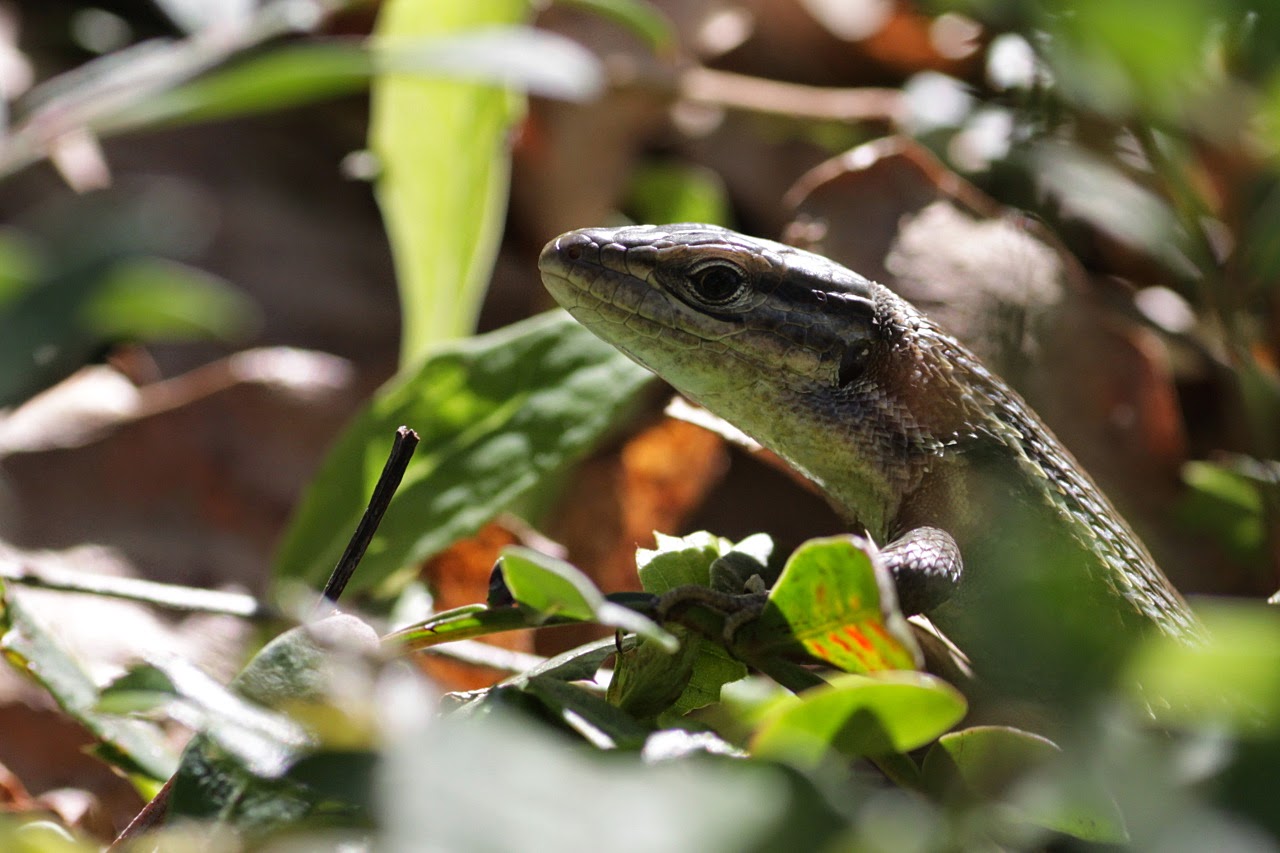 Three-cornered Leek Allium triquetrum was frequent under the trees along the banks, but the dense scrub left little room for other plants.  I reached a more open clearing where I had an encounter with a co-operative Large Psammodromus Psammodromus algirus, then I decided to leave the crowds and take road over the Las Palomas pass.  There were still ibexes to be seen somewhere, and I thought the higher I can get the better my chances of finding them would be. 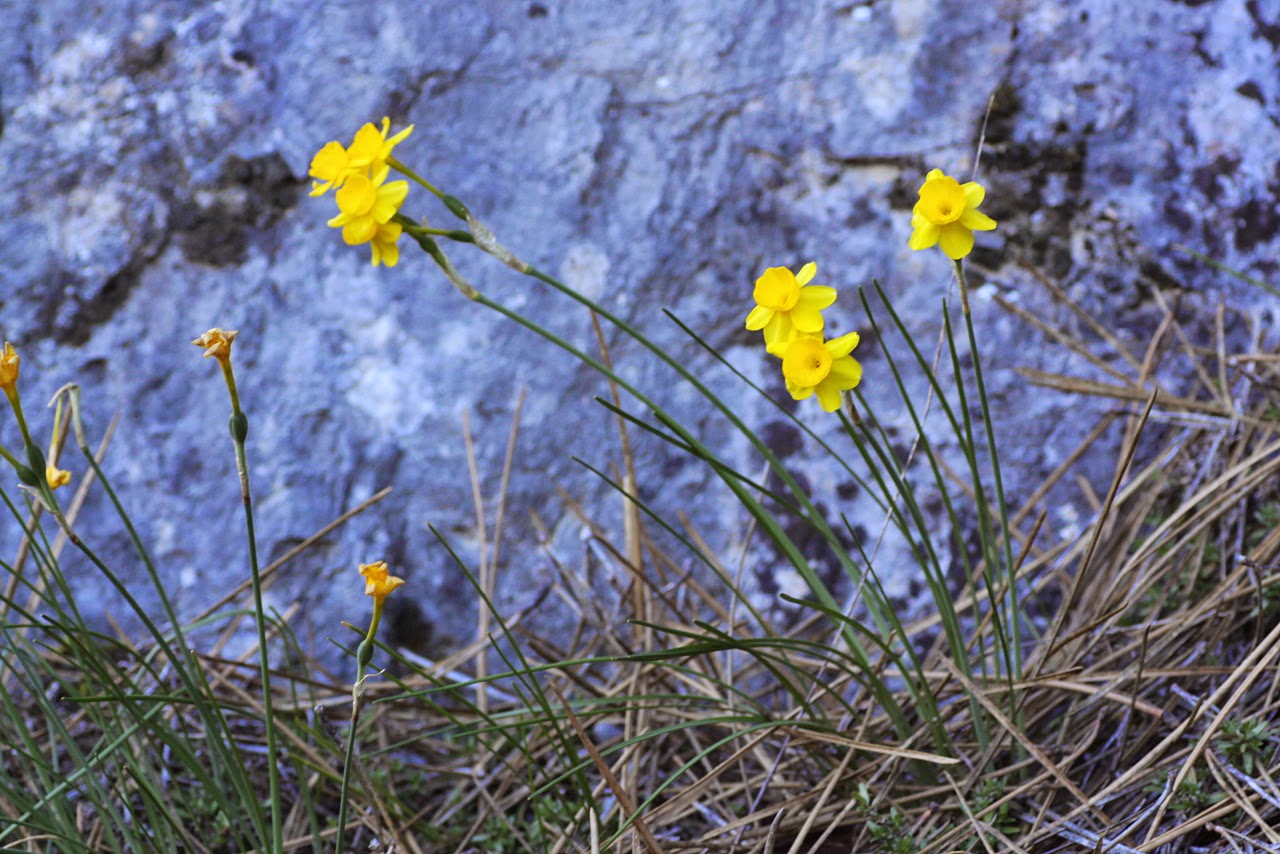 Before the pass, I came to more jonquils on rocks near the Pinsapar trail car park.  I thought they might be Narcissus cuatrecasasii on their typical ledge habitat, but they turned out to be assoanus.  I tried to convince myself that these were big boulders among vegetation rather than sheer cliff faces, but I was a little disappointed that perhaps I did not understand the ecology of these species as well as I had thought. I drove over the pass and down the other side, past many more jonquils, all without a convenient car park nearby so they remained unexamined.  A group of Giant Orchids Himantoglossum robertianum needed no stopping for identification, but a small layby had been provided for my convenience so I used it.  The giants were growing with normal-size Orchis olbiensis and a large and attractive legume, Erophaca baetica. 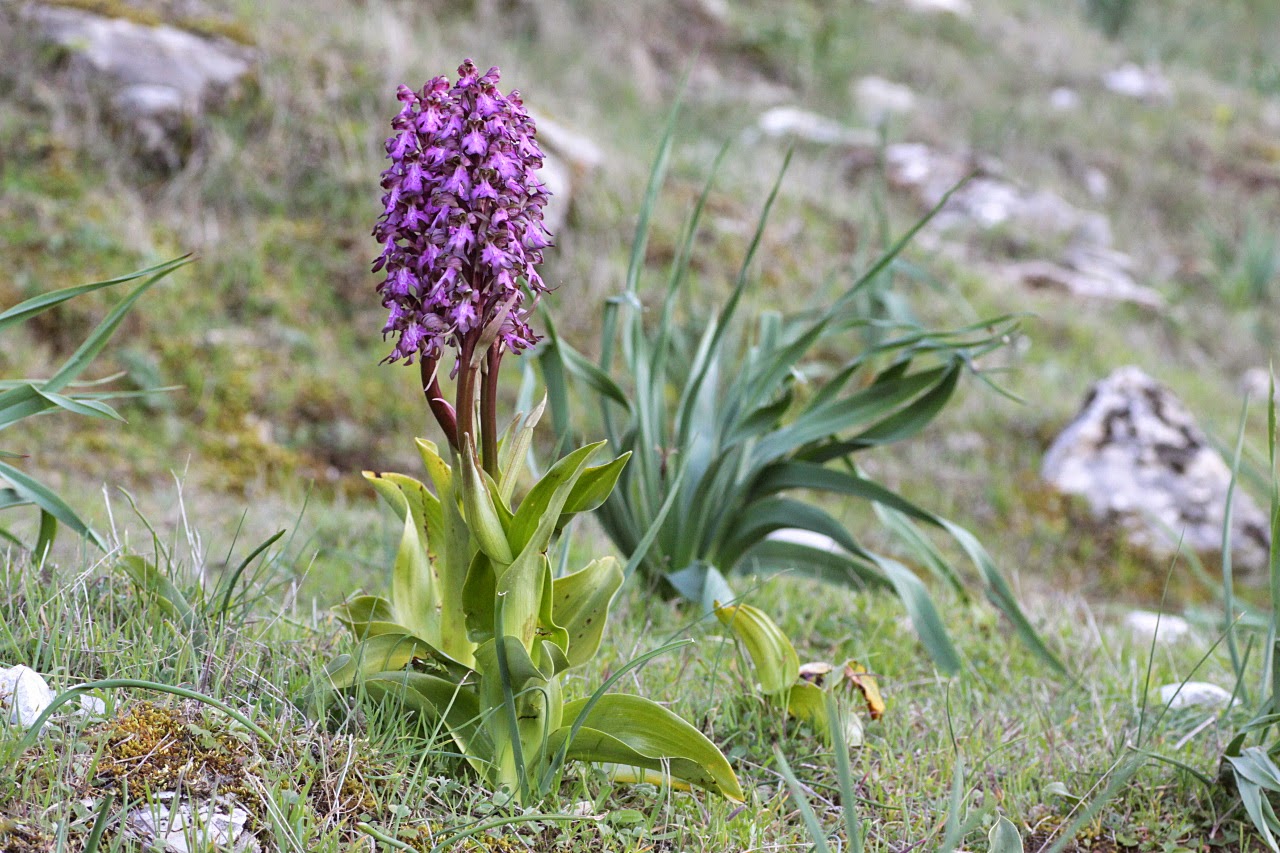 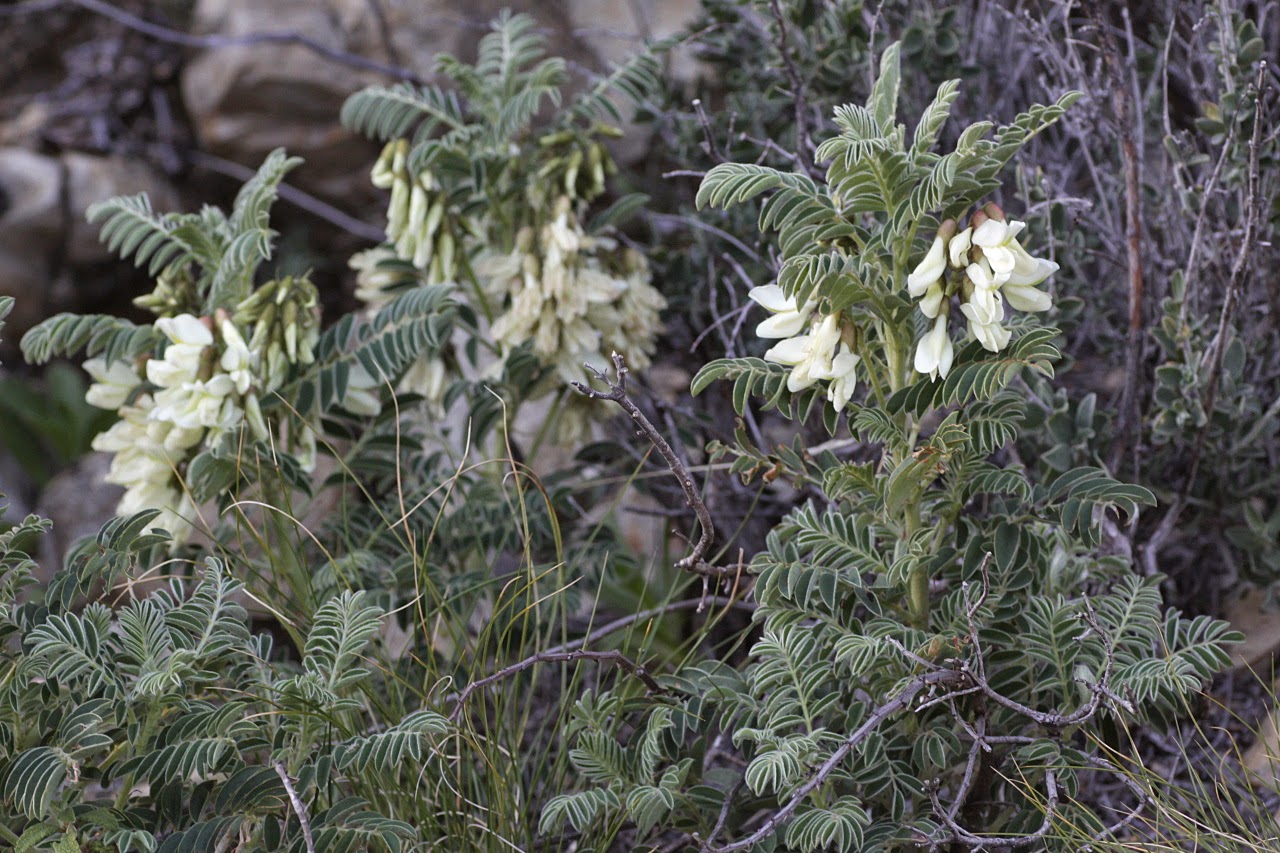 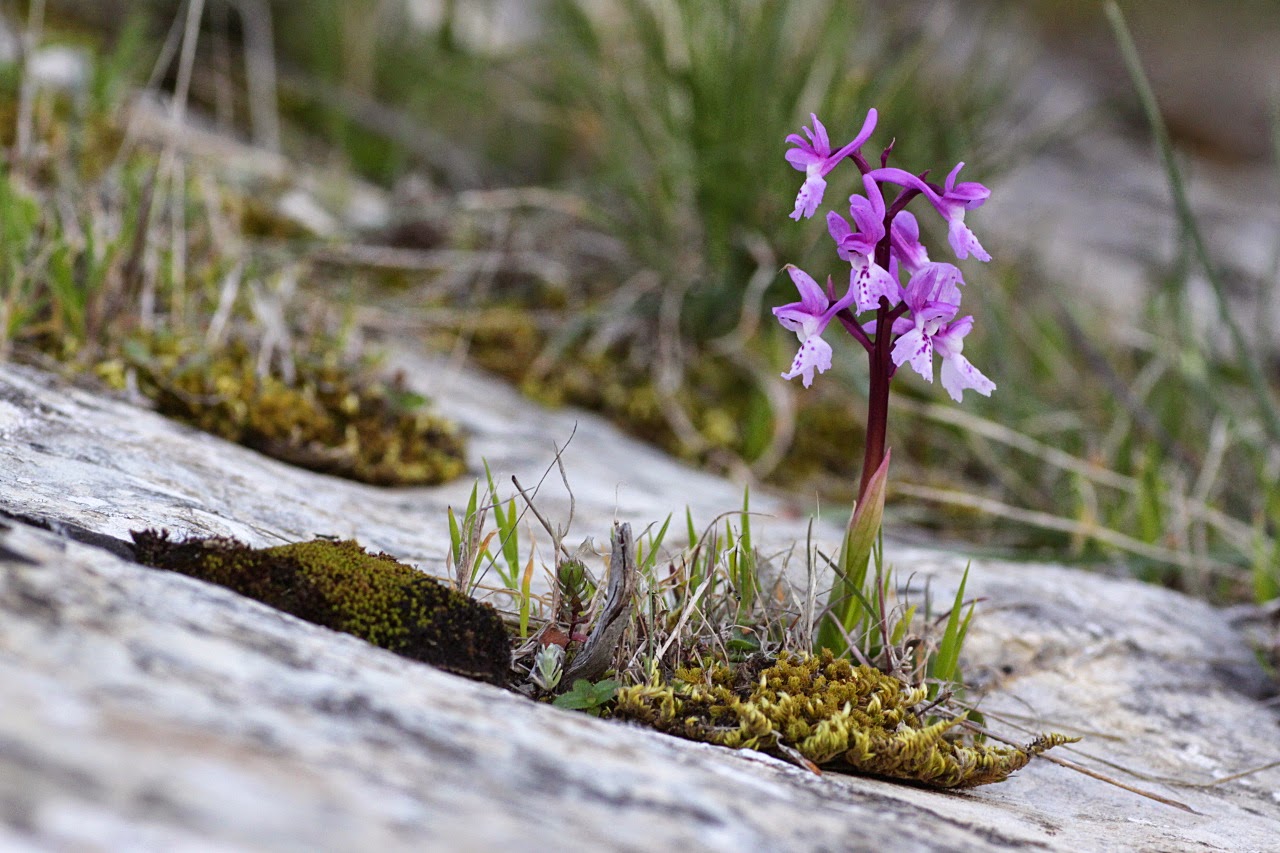 The sun was now setting so I had to let go my hopes of ibex and turn back over the pass to Grazalema and home.  And of course it was now, just as there was enough light left to see them, that two large animals ran in front of the car and up the bank beside the road where they were good enough to pause and start grazing.  They confused me at first because they did not have the full horns or beard of a male ibex, so I assumed they must be Mouflon Ovis musimon. But the horns were the wrong shape, so they must have been a couple of young male Spanish Ibex Capra pyrenaica.  Talk about leaving things until the last minute.  If you can prove that they were ibexes, please let me know.  If you can prove that they were not, then you should probably let me know, but don't expect me to be pleased about it. 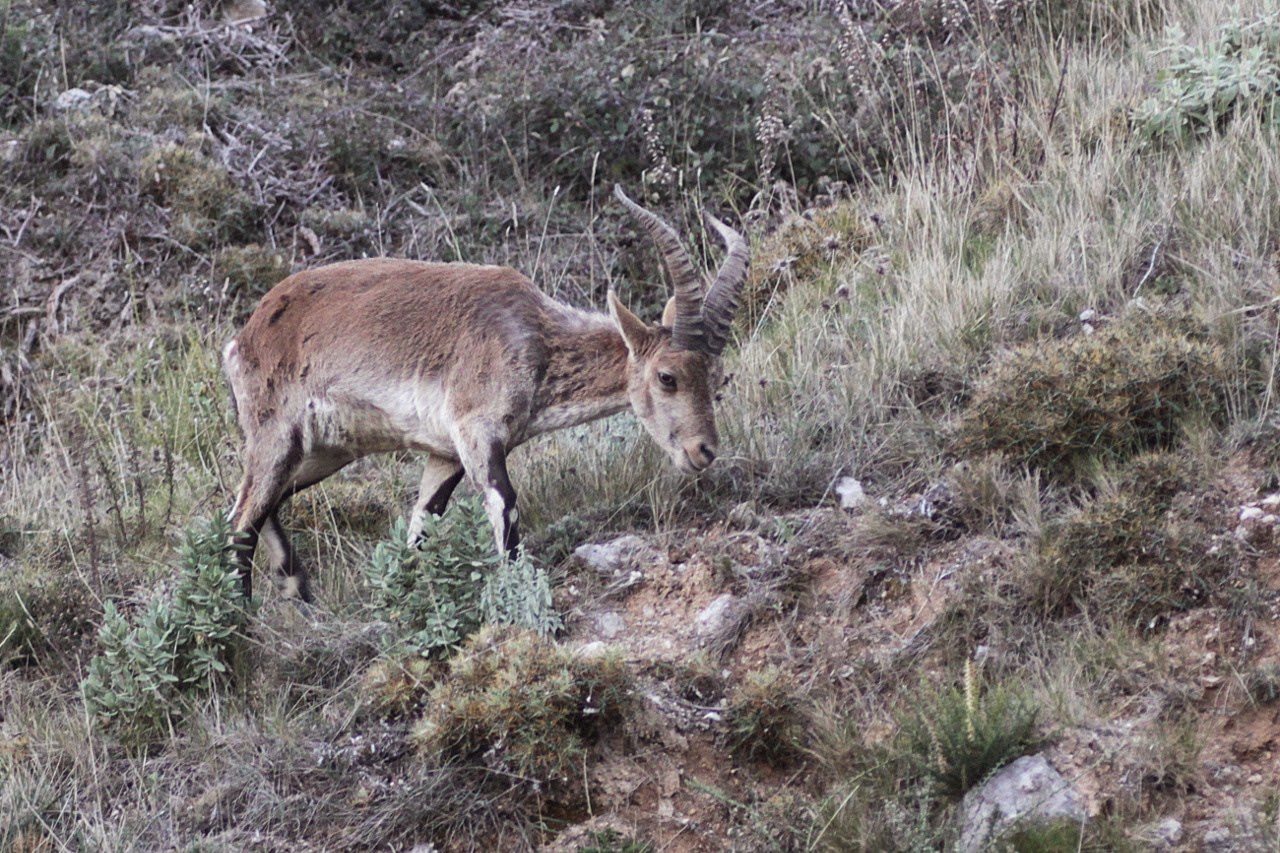