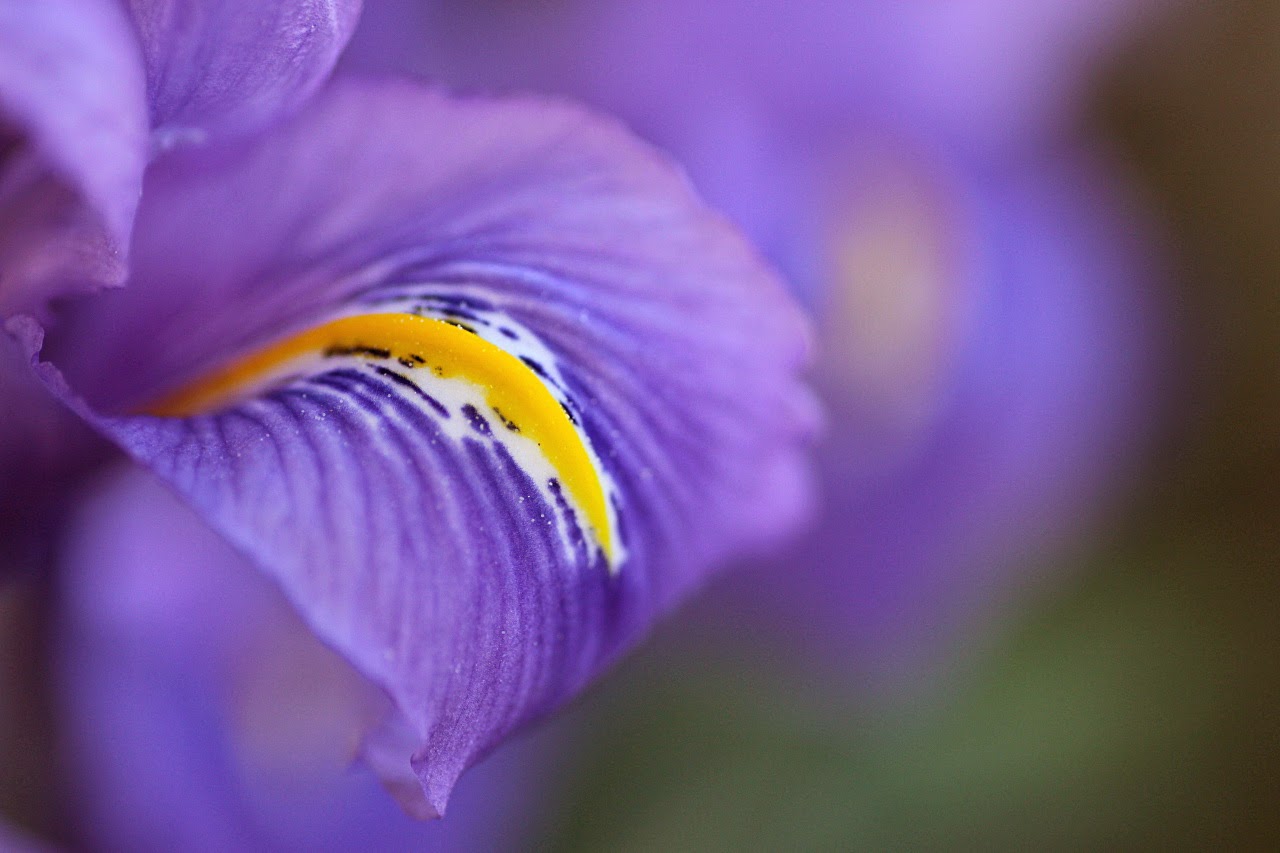 Every year March arrives and I am filled with a desire for what gardeners call spring bulbs: daffodils, crocuses, snowdrops, and other stately flowers.  To me they are just delightful, appearing at a season when the world is waking from winter and summer seems to be almost here.  The trouble is summer is not almost here, and I am not one for garden plants.  So I imagine heading south to seek out some of these species in their native haunts in southern Europe.  This year I realised my imaginings and took off for a week in Andalucia where the mountains would have flowers already in bloom, and plenty of other wildlife waiting to bring me into summer two months early.  But it was the daffodils that really drew me.  Iberia is the homeland of Narcissus - about two-thirds of the wild species are found there - and the area around Ronda promised a selection of these plants in a setting of spectacular scenery.

I arrived yesterday evening and drove up from the coast into the mountains of the Baetic Cordillera to Cuevas del Becerro where I would stay for the next week.  This morning I awoke to Sardinian Warblers and Serins, and I went out to explore the limestone rocks and crags behind the cabin (see above).  I had not gone far before I heard the nasal twangs of Rock Sparrows, which were sharing a small cliff face with a Blue Rock Thrush.  Below this was a grassy slope with many Spanish Iris Iris planifolia, most of them finished flowering, but some still bearing their mauve standards, the lower tepals carrying a small river of gold disappearing into the cave-like mouth of the flower at one end and cascading over the lip at the other. 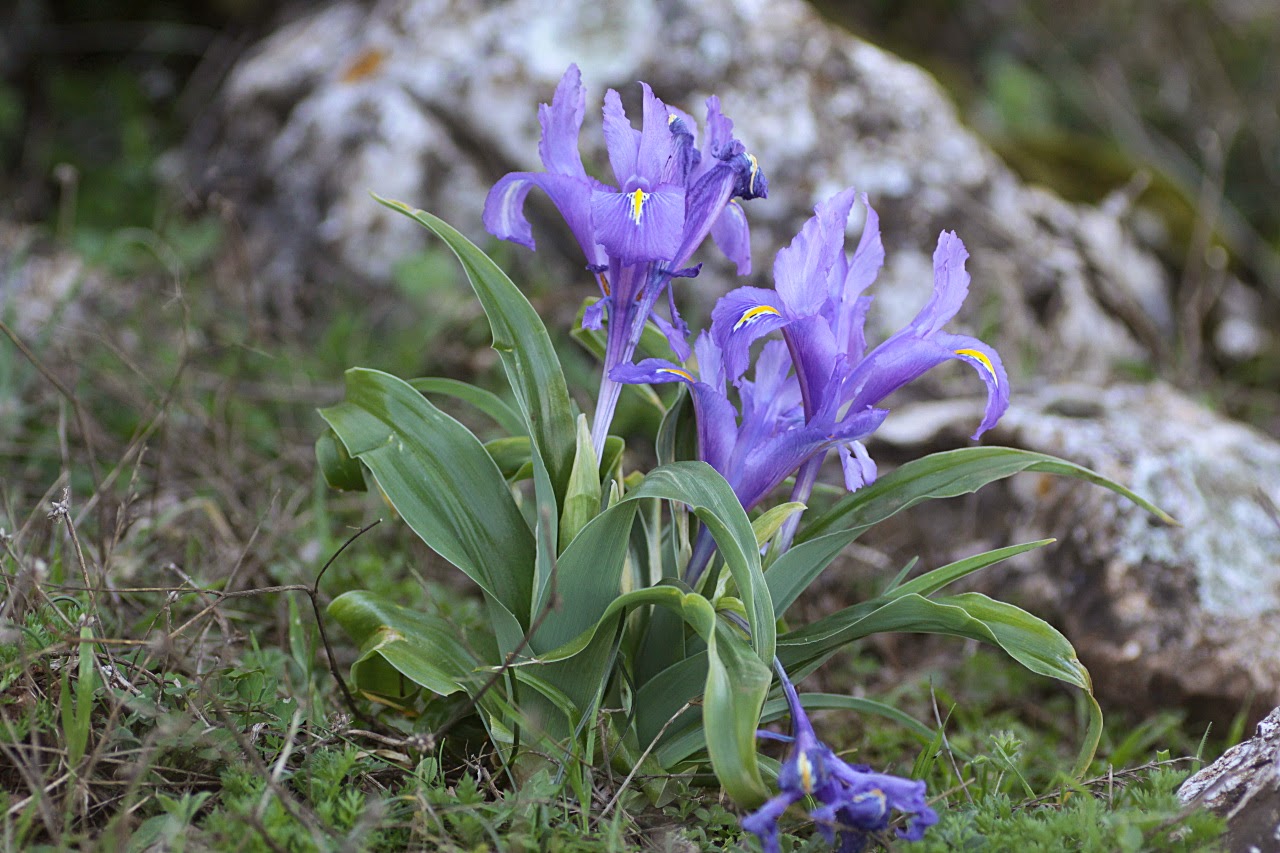 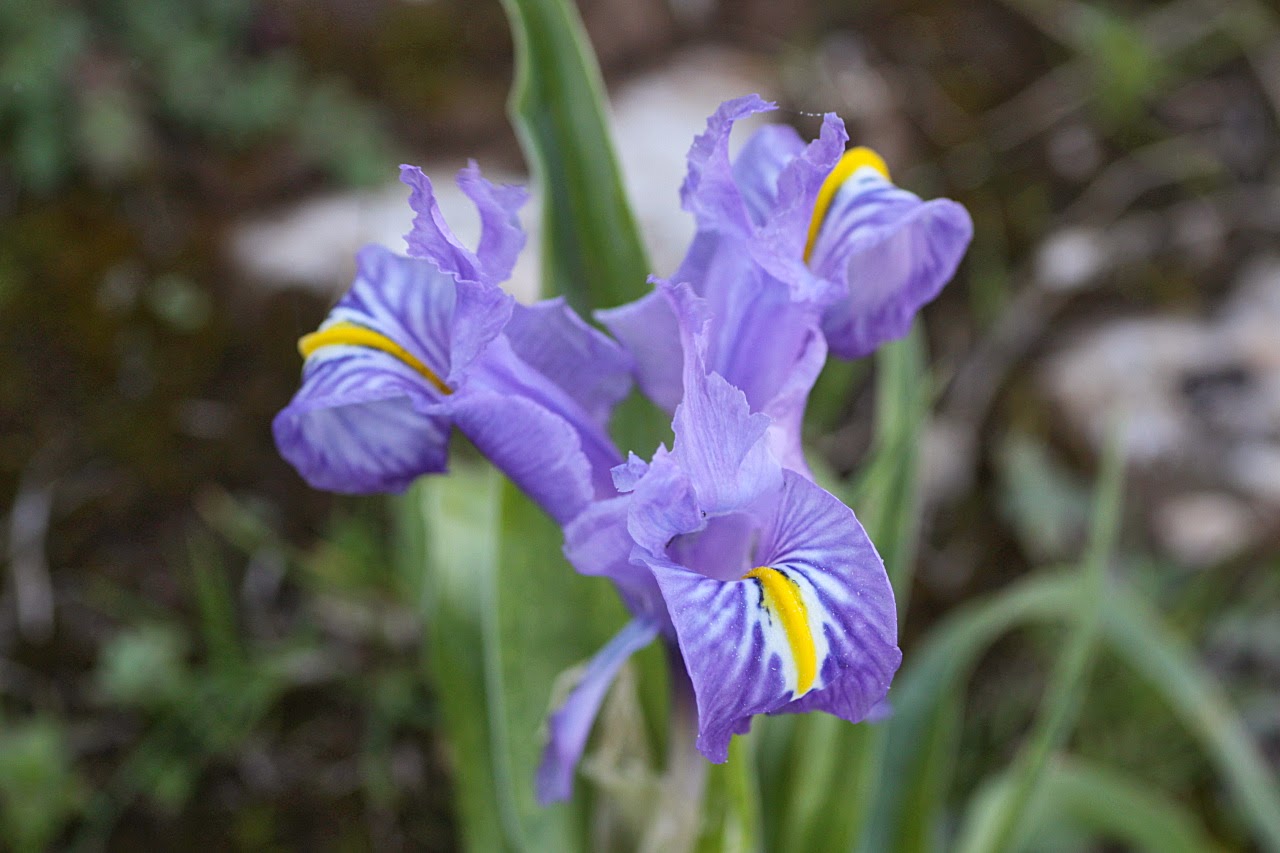 There were not many flowers here; most were yet to appear or had been munched in their buds by the goats whose herders had passed me earlier.  If I was going to find things here I would do well to look in the grikes, among the sharp ridges, and on the steeper cliffs where the plants could find refuge from chomping mouths.  It was in such a place, a crack between some clints, that I found my first wild daffodil, the Papery-white Narcissus Narcissus papyraceus.  Hurrah.  At least I would not be going home daffodil-less. 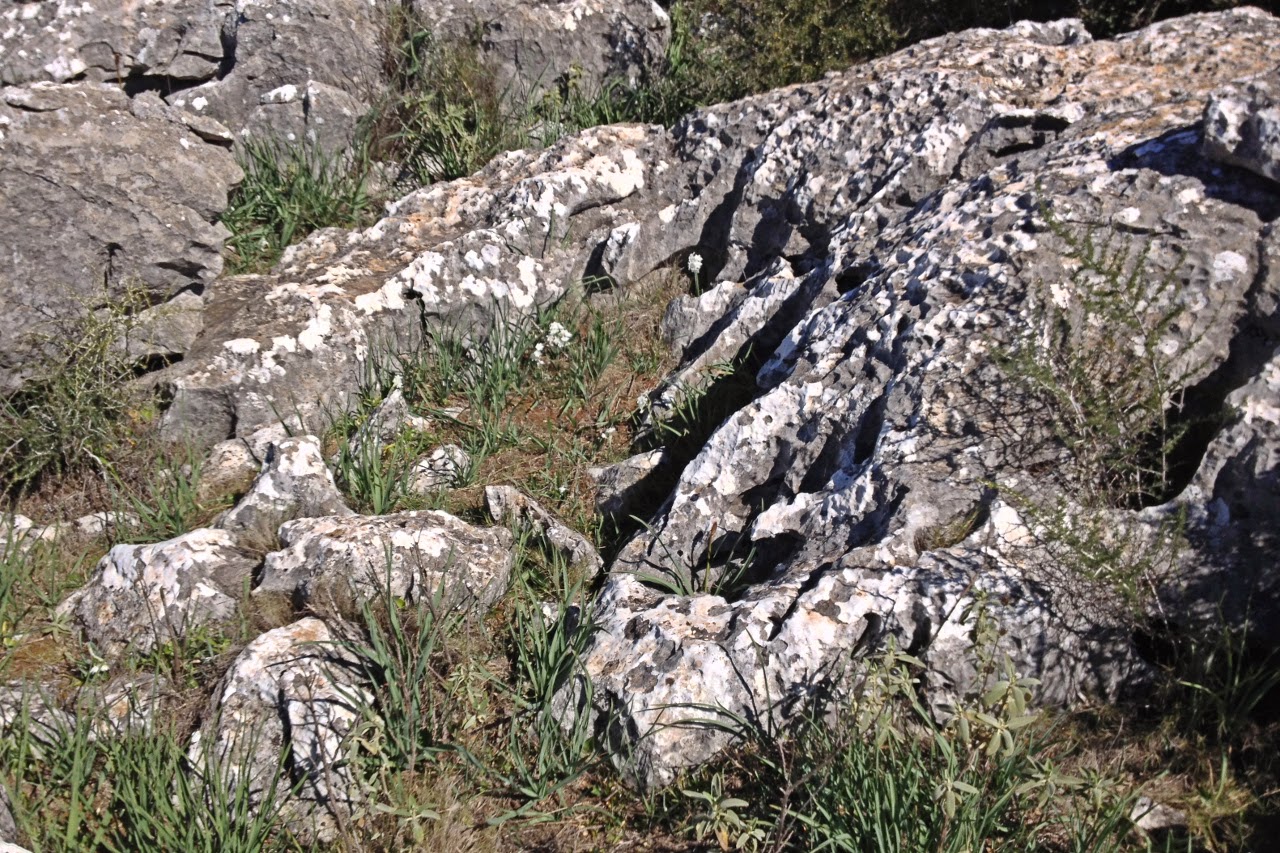 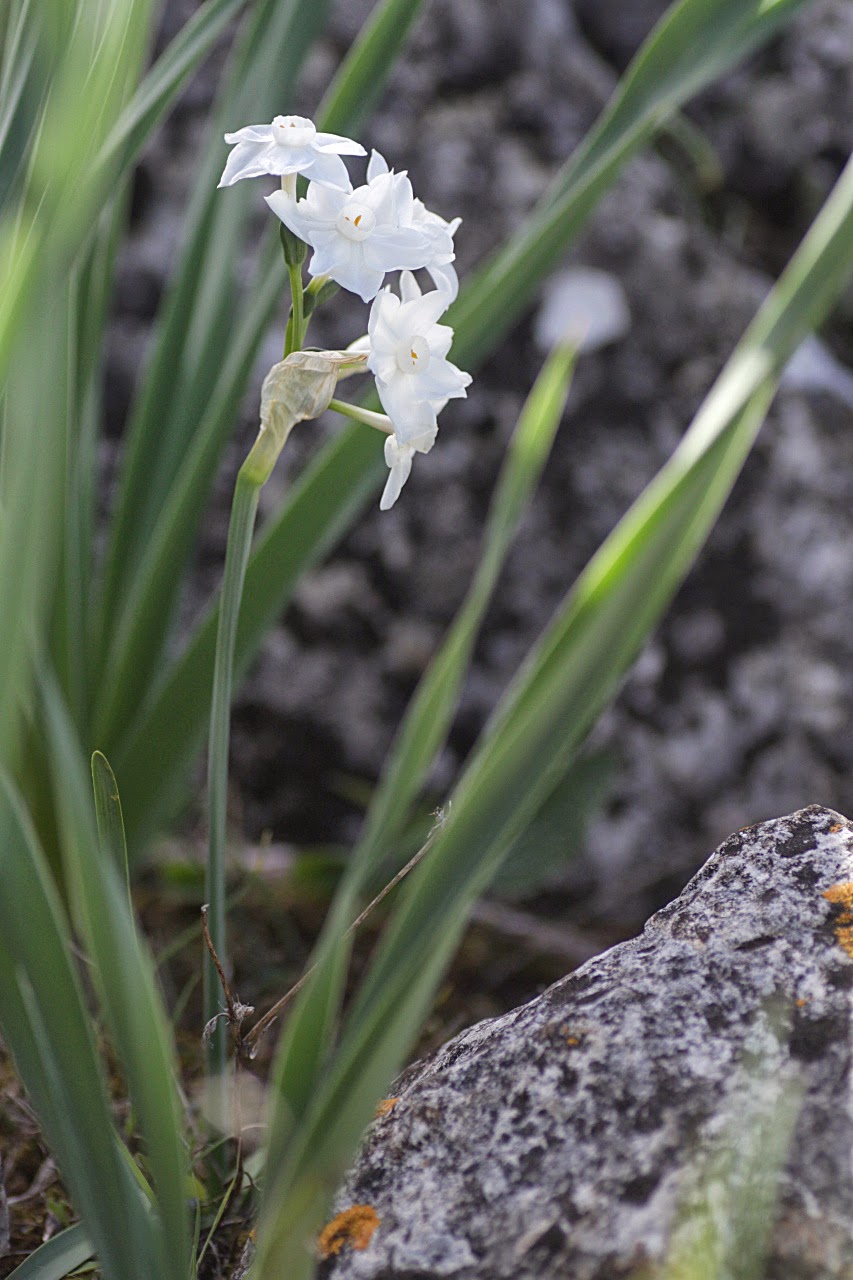 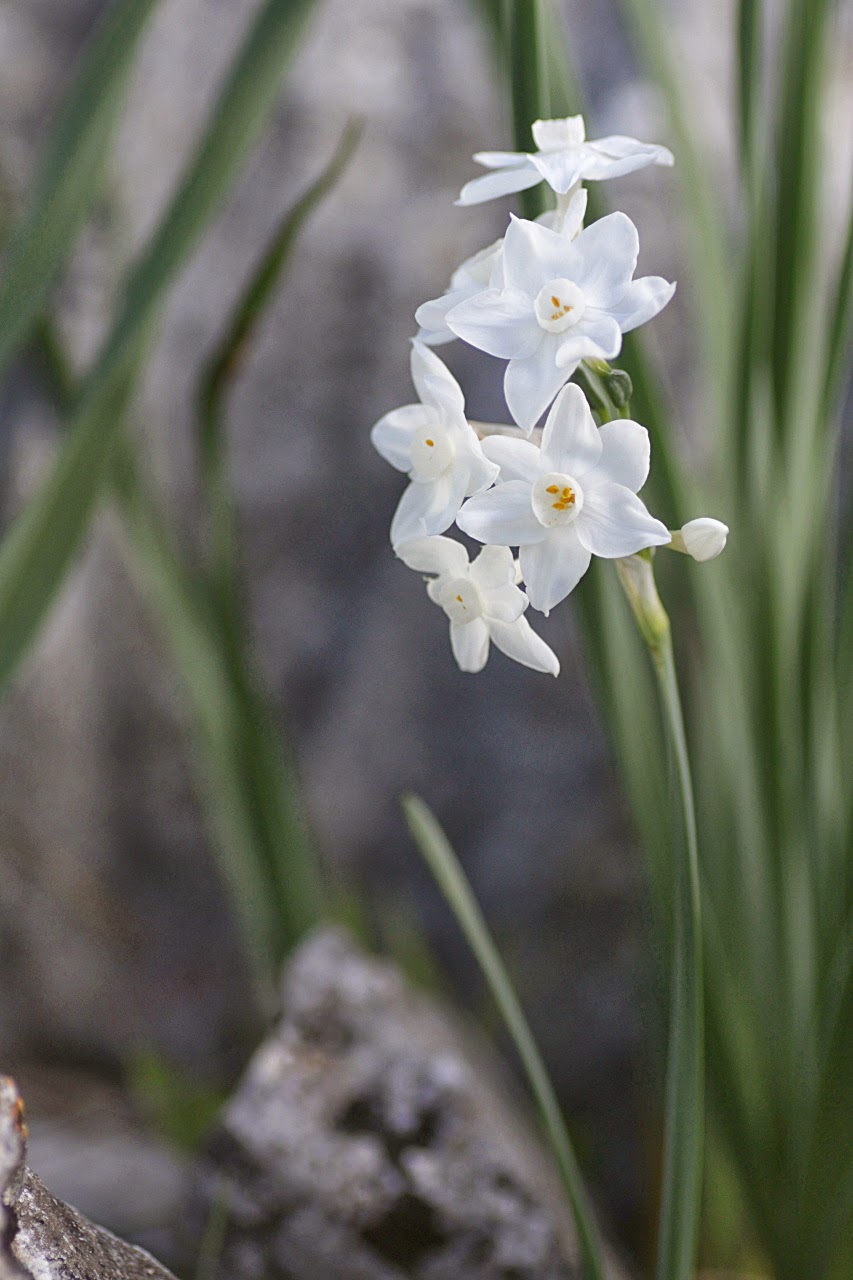 The flowers were indeed a clean white, and they had a slightly soapy smell that reminded me of Primroses Primula vulgaris.  I found more flowers scattered amongst the rocks as I made my way around the back of the high point and started climbing down towards lunch past some Spanish Bluebells Hyainthoides hispanicus that were just starting to flower. 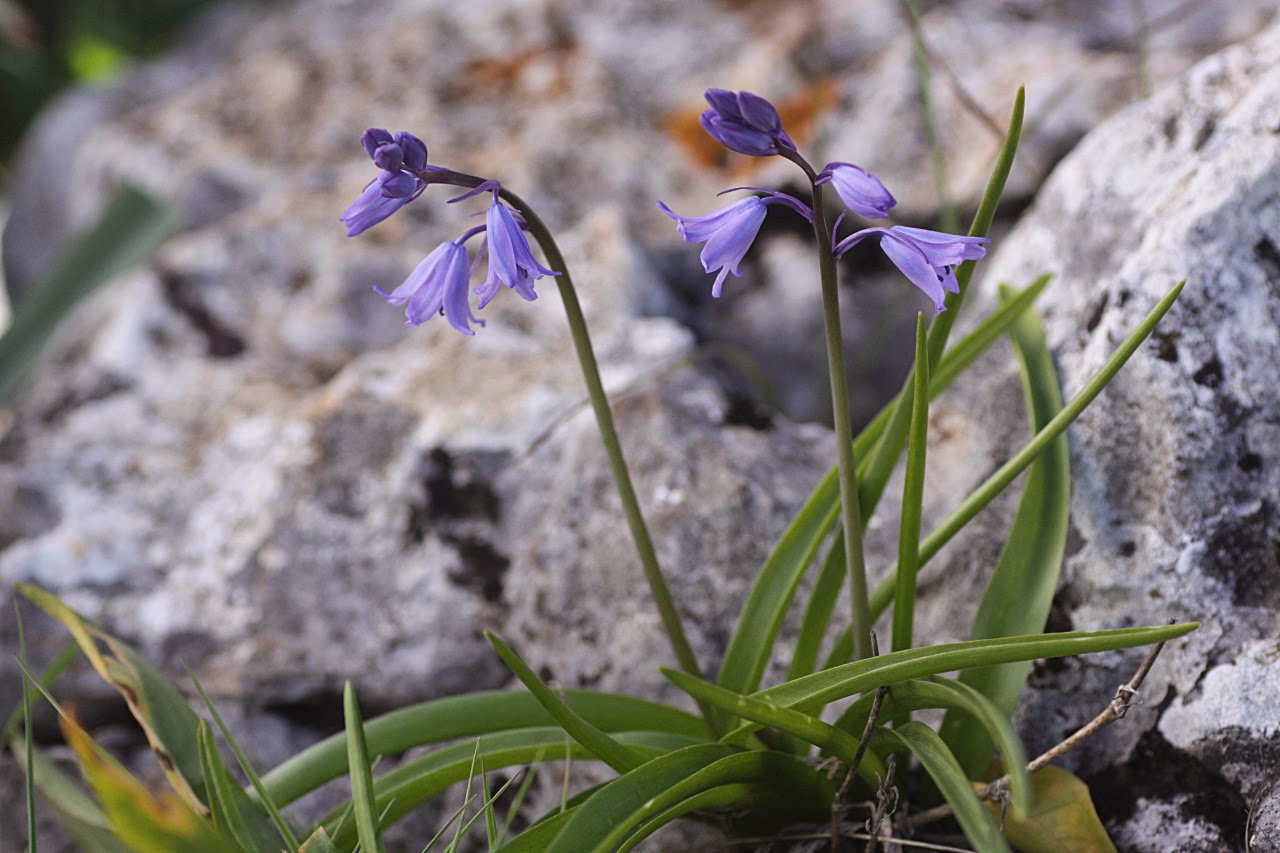 By now the butterflies were out and Swallowtail, Spanish Festoon, Brimstone, and Wall were flying restlessly past.  A larger insect got up from my path and with much rattling of wings flew a few metres before landing again. 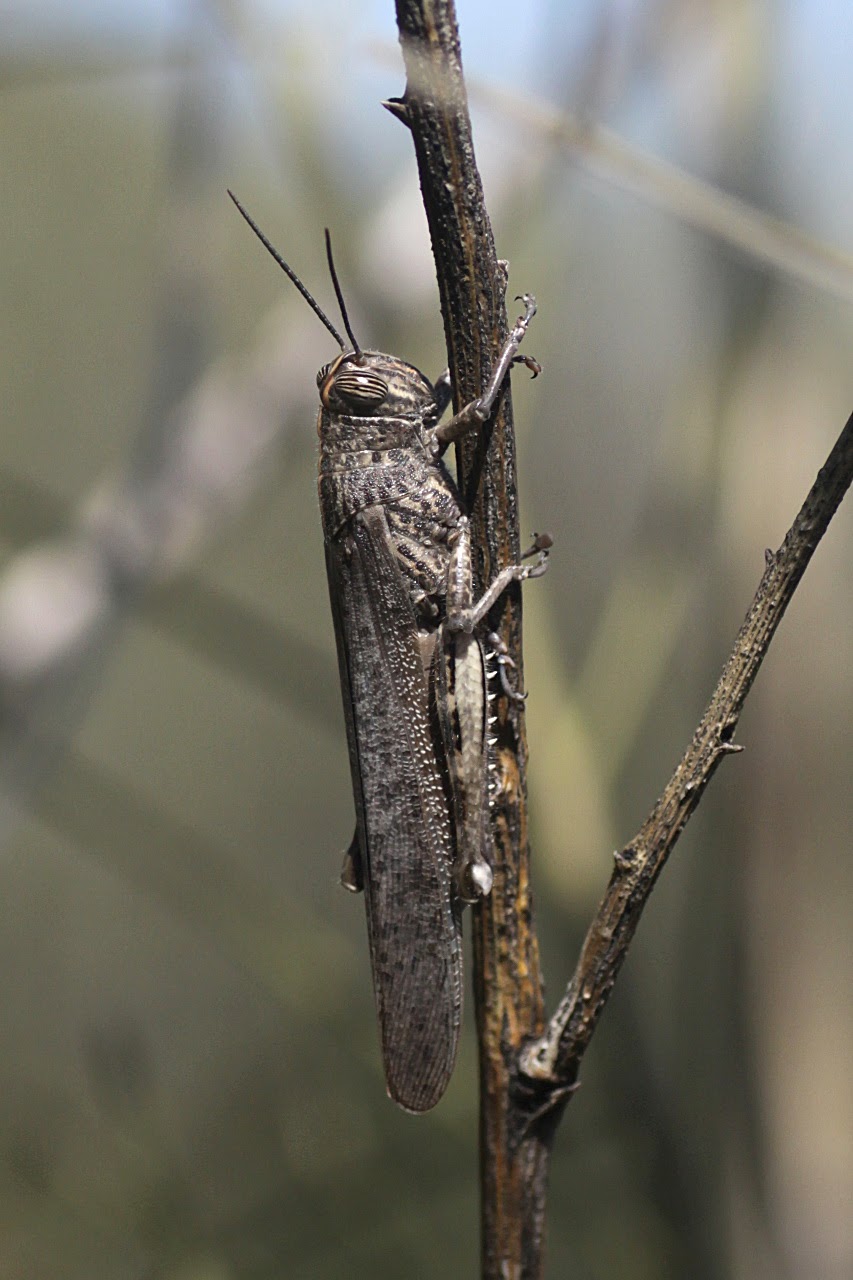 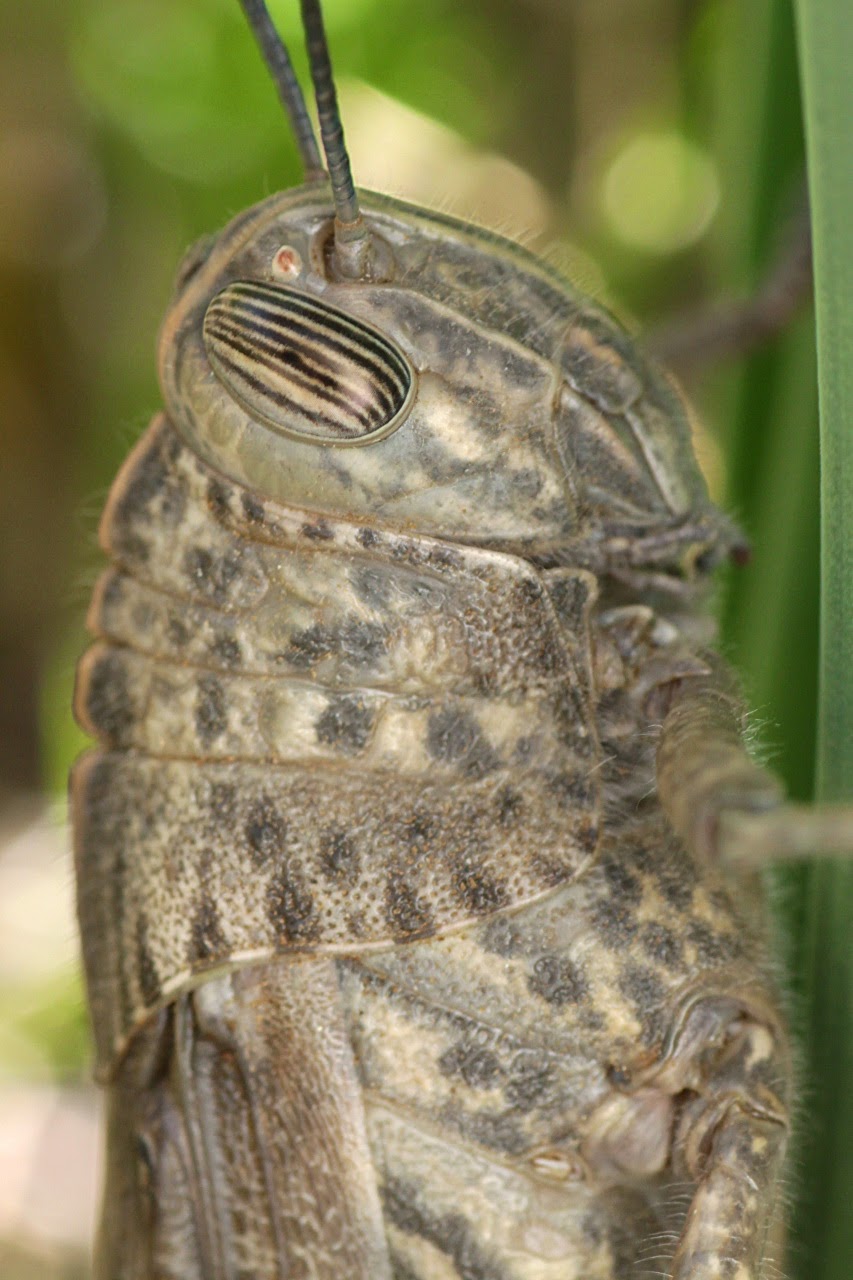 It was an Egyptian Grasshopper Anacridium aegyptium, a locust-sized grasshopper with distinctive striped eyes.  Most of the smaller butterflies had not been so obliging, but I managed to catch up with one on the ground.  It was a Provence Hairstreak Tomares ballus, which has the attractive tictac colour scheme of green and orange, featuring the hindwing of a Green Hairstreak Callophrys rubi and the forewing of a Small Copper Lycaena phlaeas. 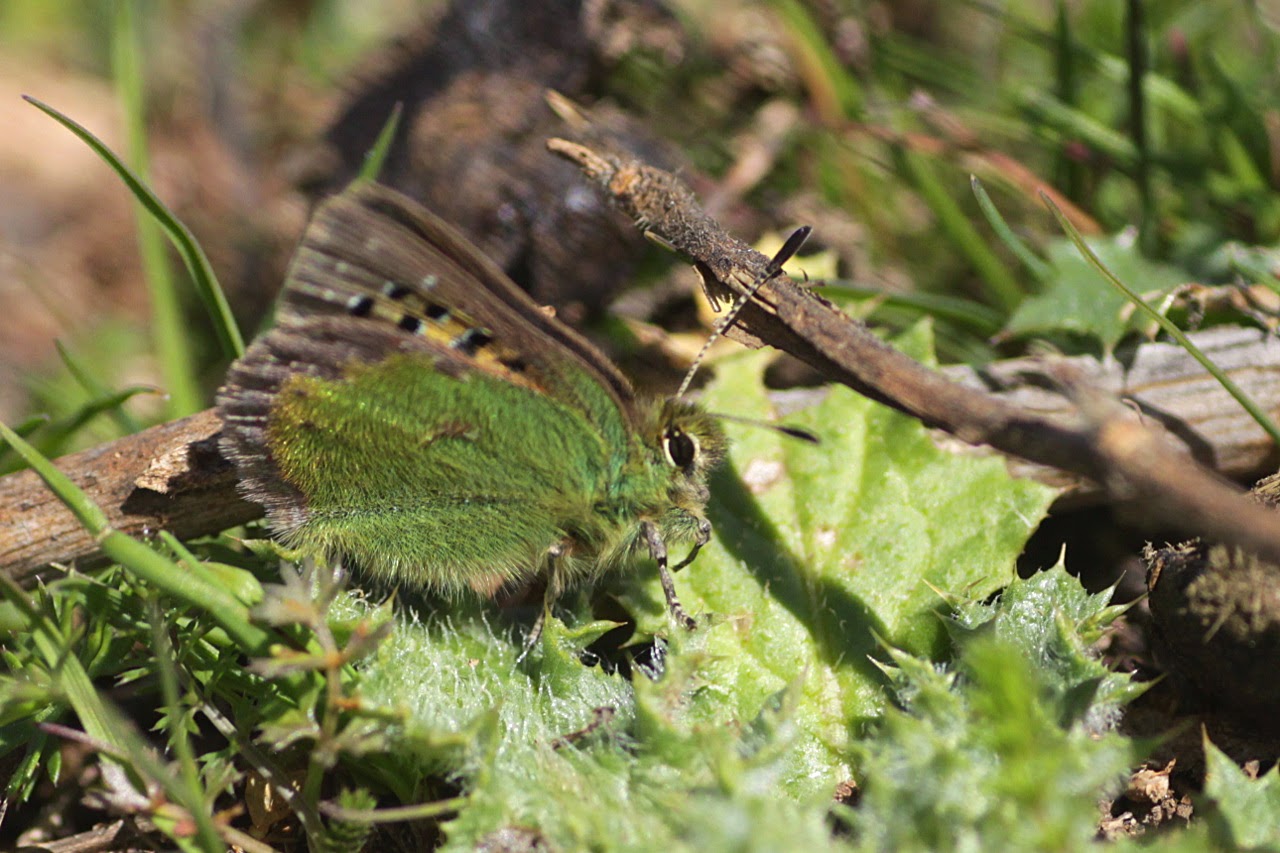 Back at the cabin the Prunus in the neighbouring garden was alive with honey bees, hoverflies, and a few Xylocopa carpenter-bees. 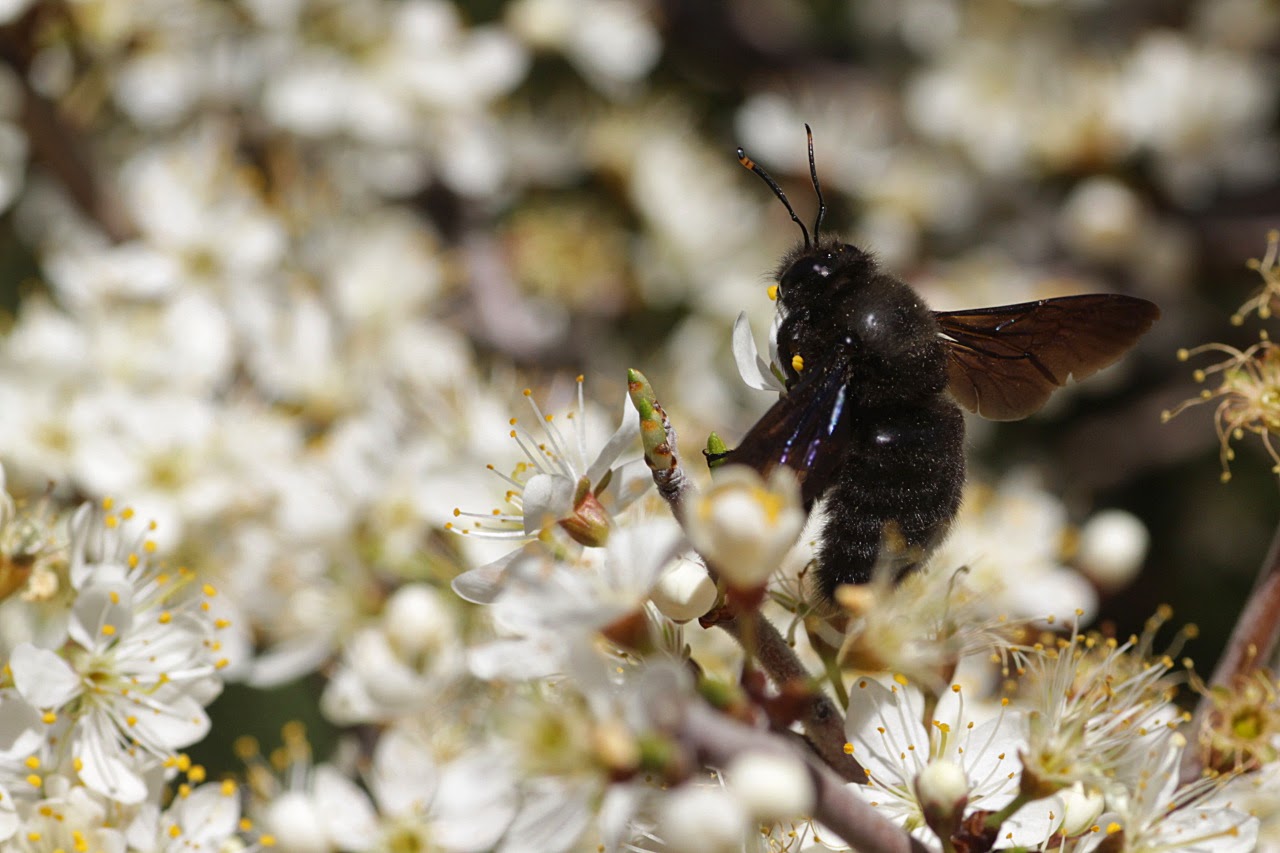 A nice start to my attempt to cheat the calendar and bring spring forward.  I'm glad I came.
Posted by Mark Gurney at 13:00