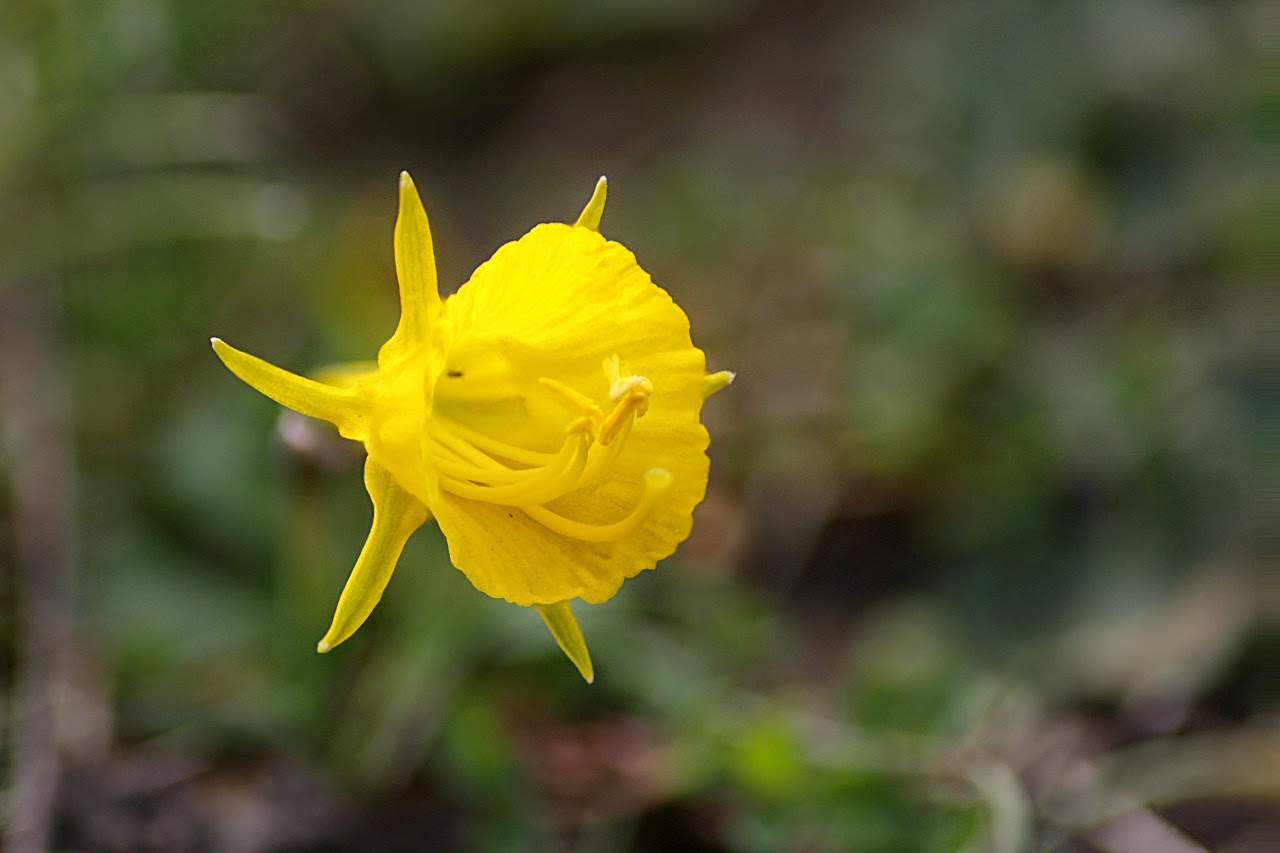 Back to the Sierra de Grazalema again today.  After a pleasant but winding drive through cork oak forests I almost reached the town of Grazalema, but I turned onto another road just before I got there.  Not far along this road I saw patches of jonquils in pastures below a steep limestone ridge, so I looked for a parking space and walked back to see whether I was in for a new daffodil. 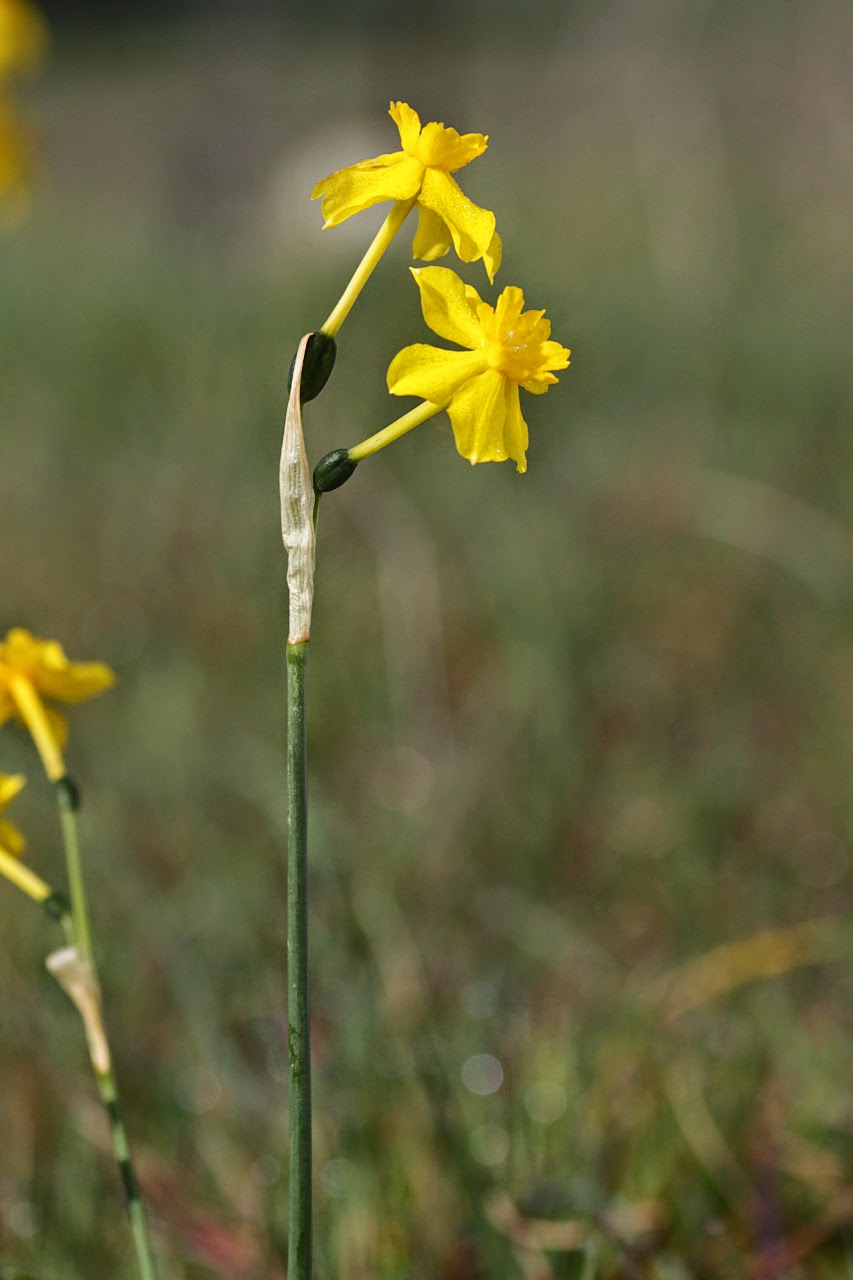 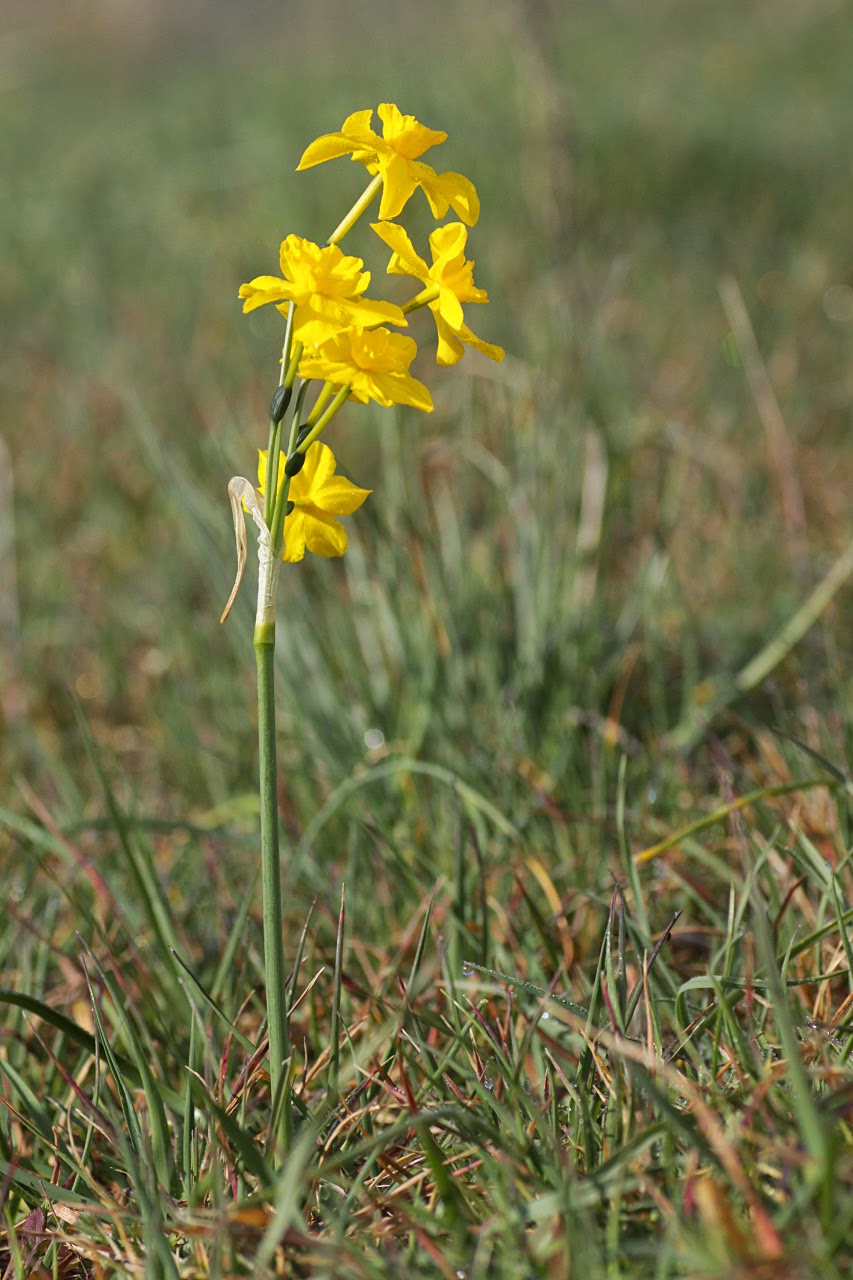 The answer was yes.  These jonquils, with their narrow leaves and smooth stems, were from Section Jonquilla, like the assoanus at Sierra de las Nieves.  But they had shorter, cone-shape coronas with lobed margins (not the fruit bowl shape and smooth margins of assoanus).  The petals were longer, and so was the tube, and most plants had two or three flowers, but the most floriferous sported eight.  The flowers had a soapy smell.  They seemed to fit Narcissus jonquilla becuase of their long tube and short corona.

The roads in the park are narrow; there are not many places where you can just pull over and go for a wander, so I stopped whenever I had the chance.  Las Covezuelas picninc area is one such place, and on a Thursday morning in March it was nice and quiet in the shade of the trees. 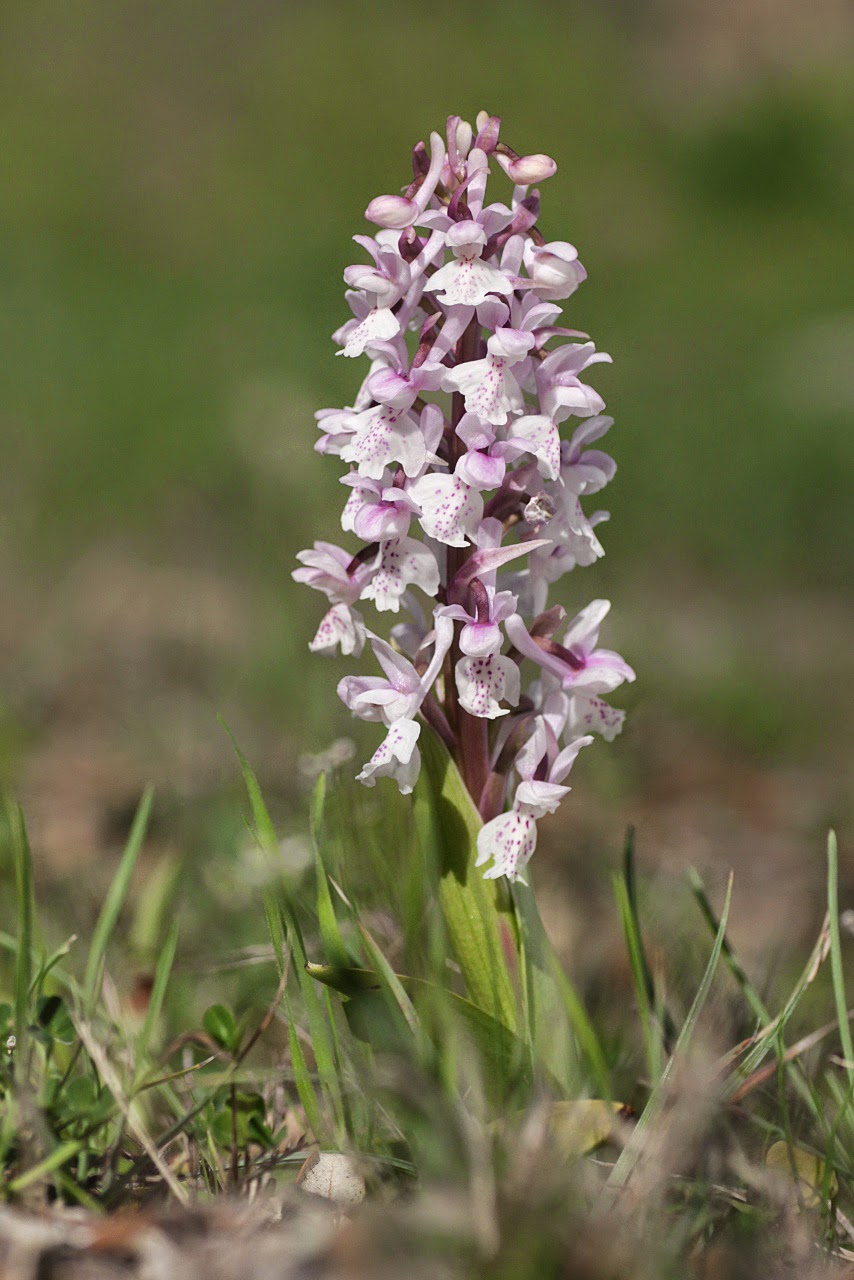 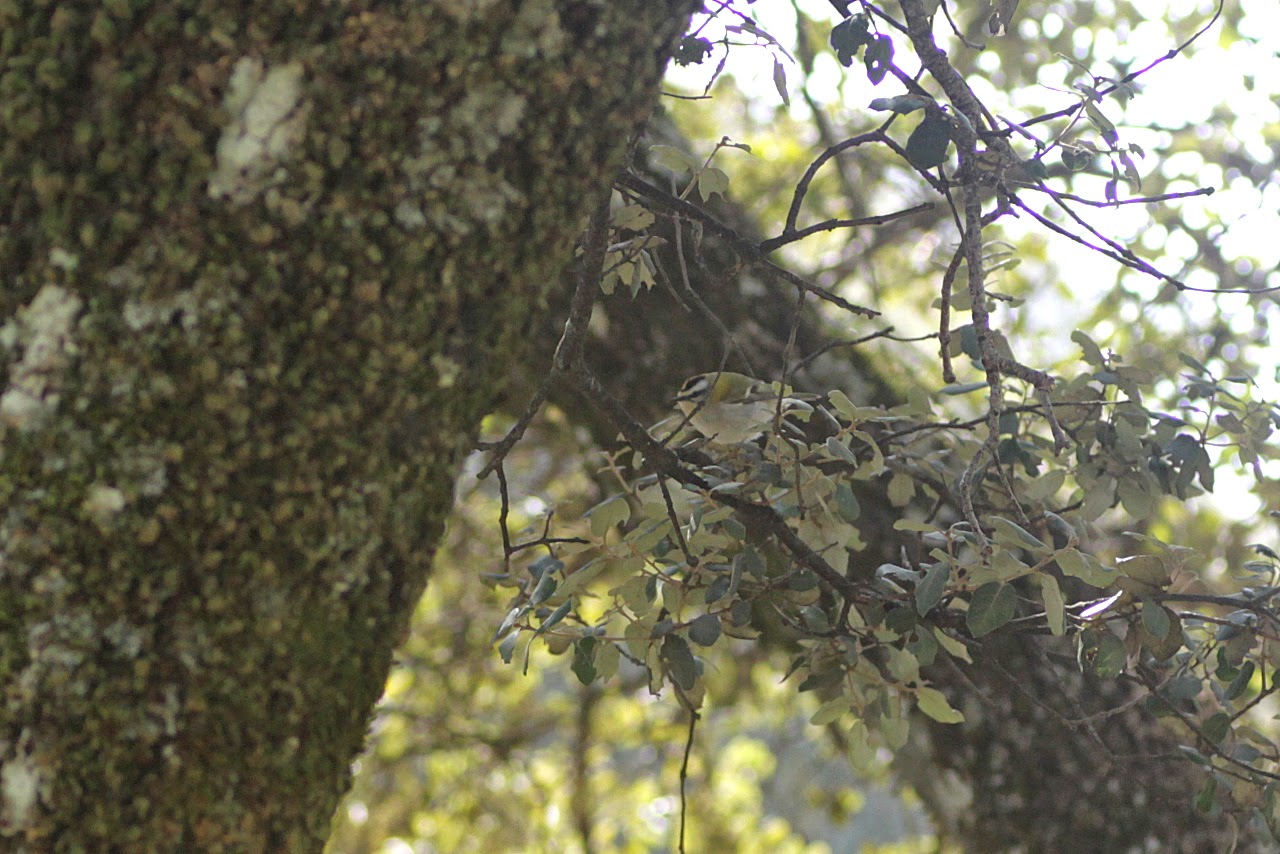 The butterflies were out again: Spanish Festoon, Large Tortoiseshell, Small Heath, Speckled Wood, and Cleopatra.  And some more Orchis olbiensis, a couple of friendly Firecrests, and a male Subalpine Warbler.  A nearby grassy slope had some wet flushes where there was an abundance of Romulea bulbocodium, and a scattering of the most trumpety daffodil of all Narcissus bulbocoldium. 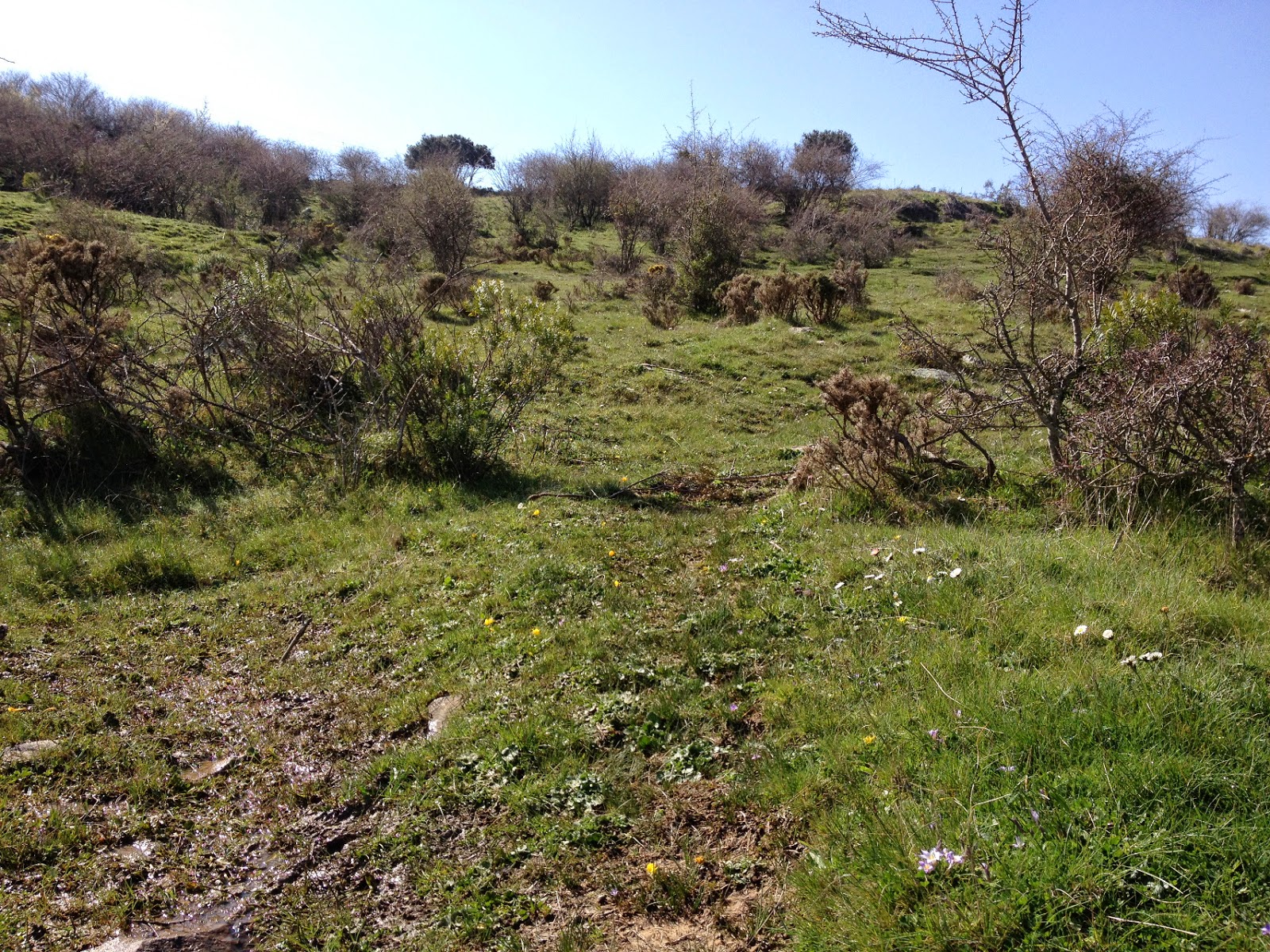 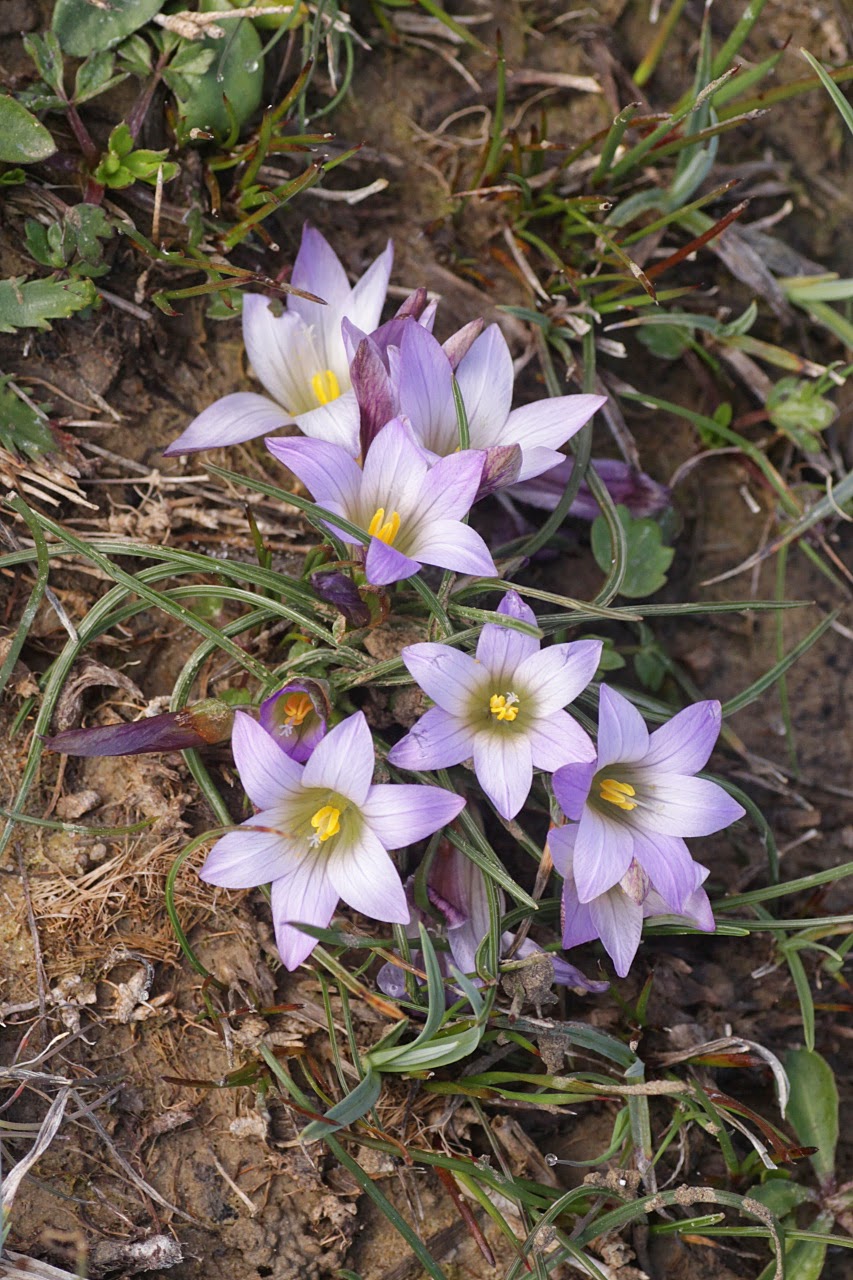 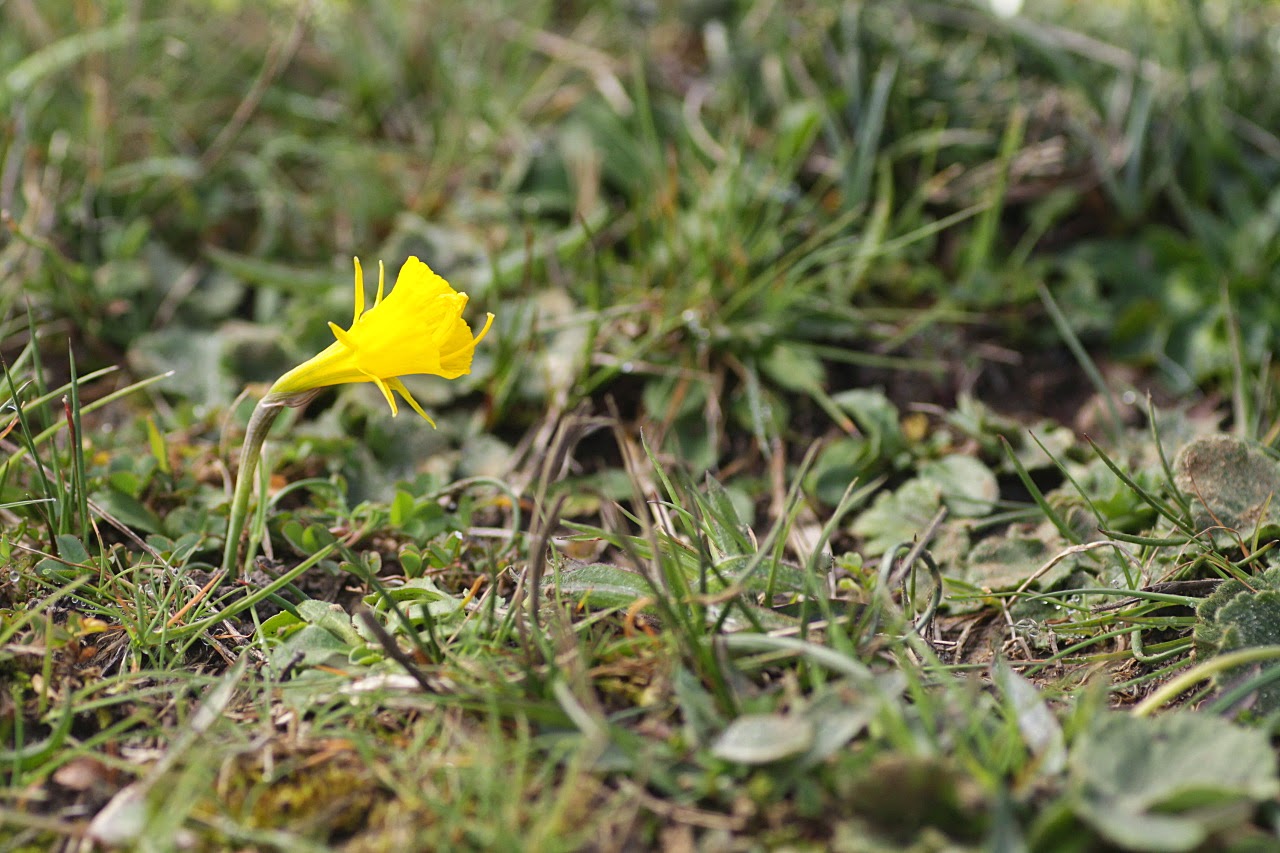 The trumpet of Narcissus bulbocoium looks as though it has burst out of the star-like collar formed by the petals, which were too weak to contain it.  The stamens and stigma protrude from the corona, and the whole effect makes me think of a space monster plant with a gaping mouth and tentacles. 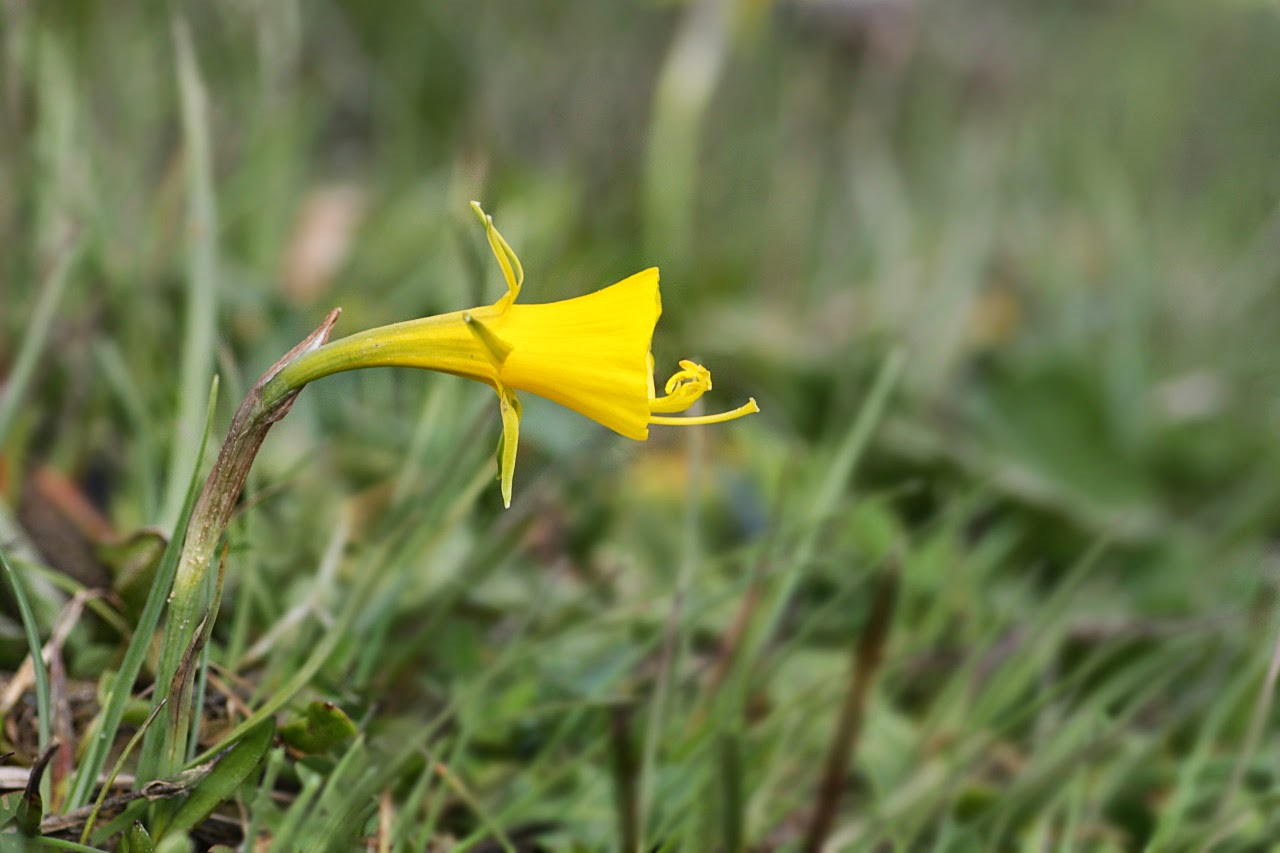 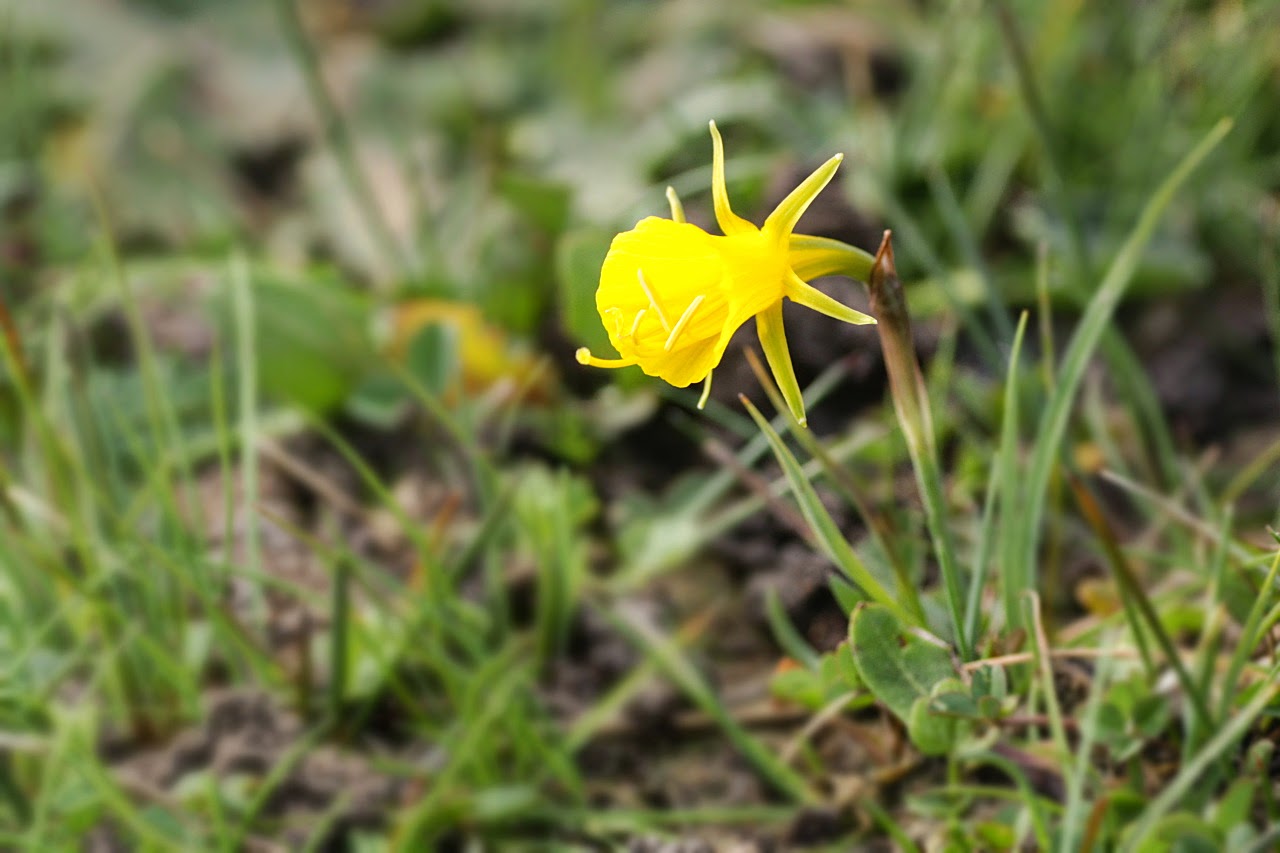 Monsters aside, Narcissus bulbocodium is an attractive thing, and quite unlike the other Narcissus I have seen this week. 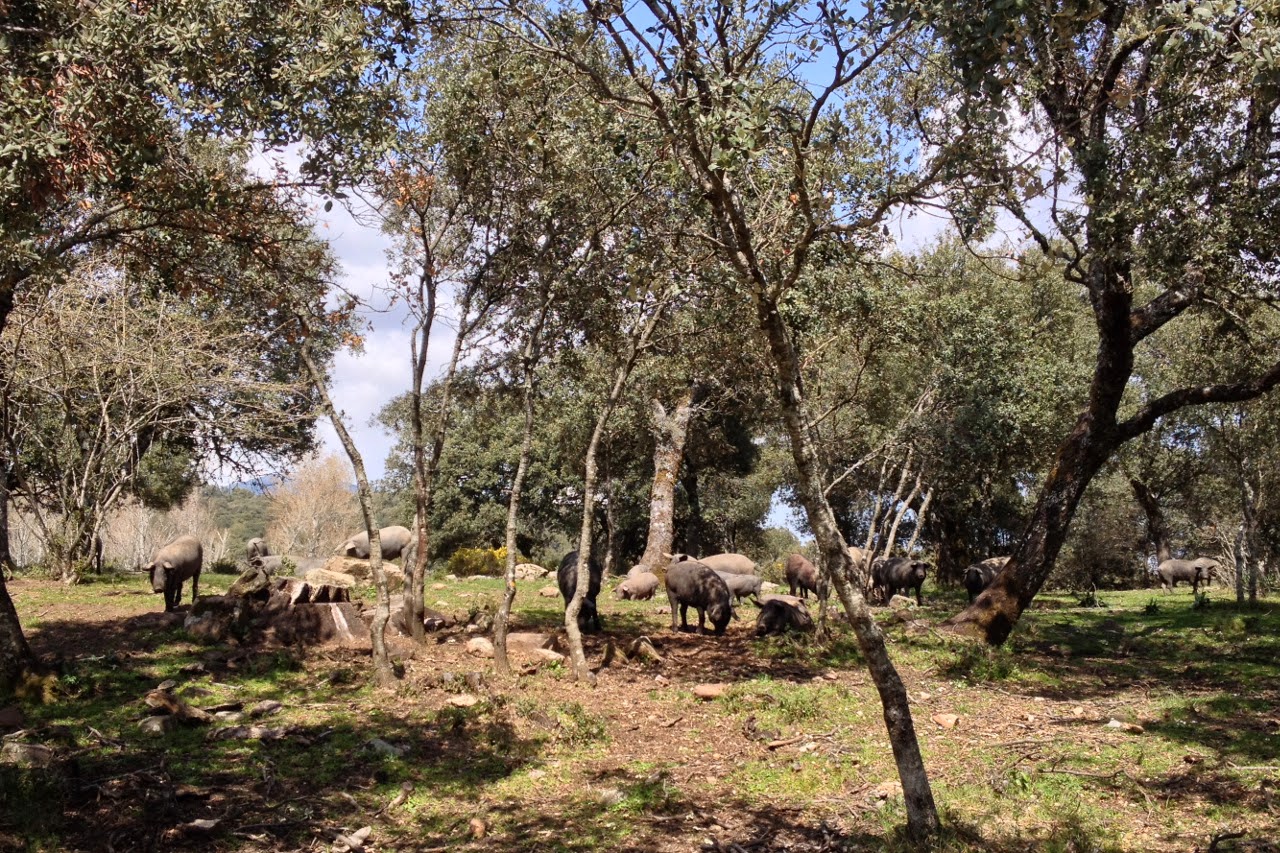 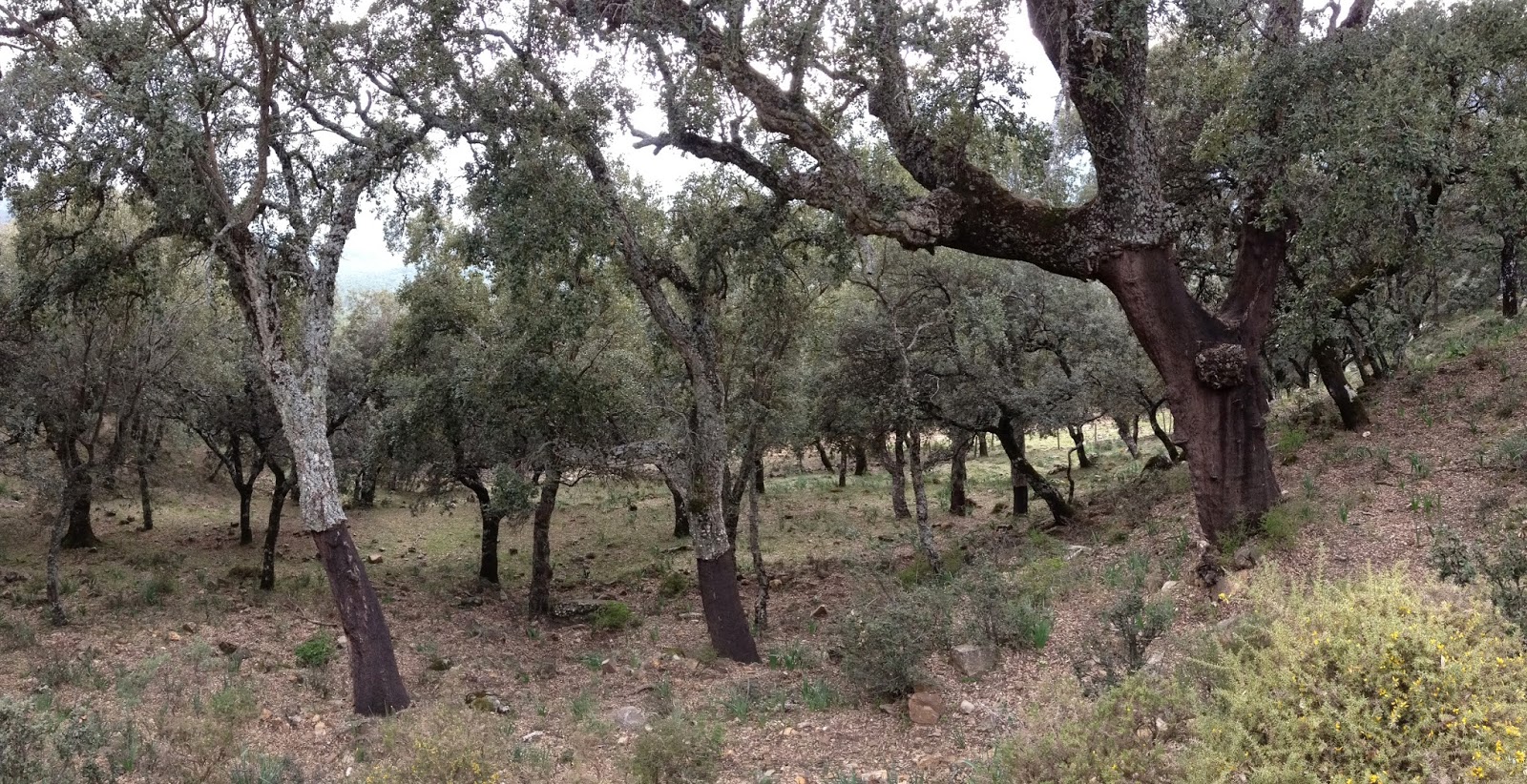 At Villalengua del Rosario I followed the Llano del Republicano trail through oak forests out on to one of the plains of the park.  Oak forests produce two things here: cork and pork.  The two evergreen oaks Quercus suber and Quercus rotundifolia can be told apart by the pattern of veins on their leaves, but it is much easier to identify Cork Oak Quercus suber by its having had its lower bark removed.  I expect the pigs are happy to eat acorns from either of them. 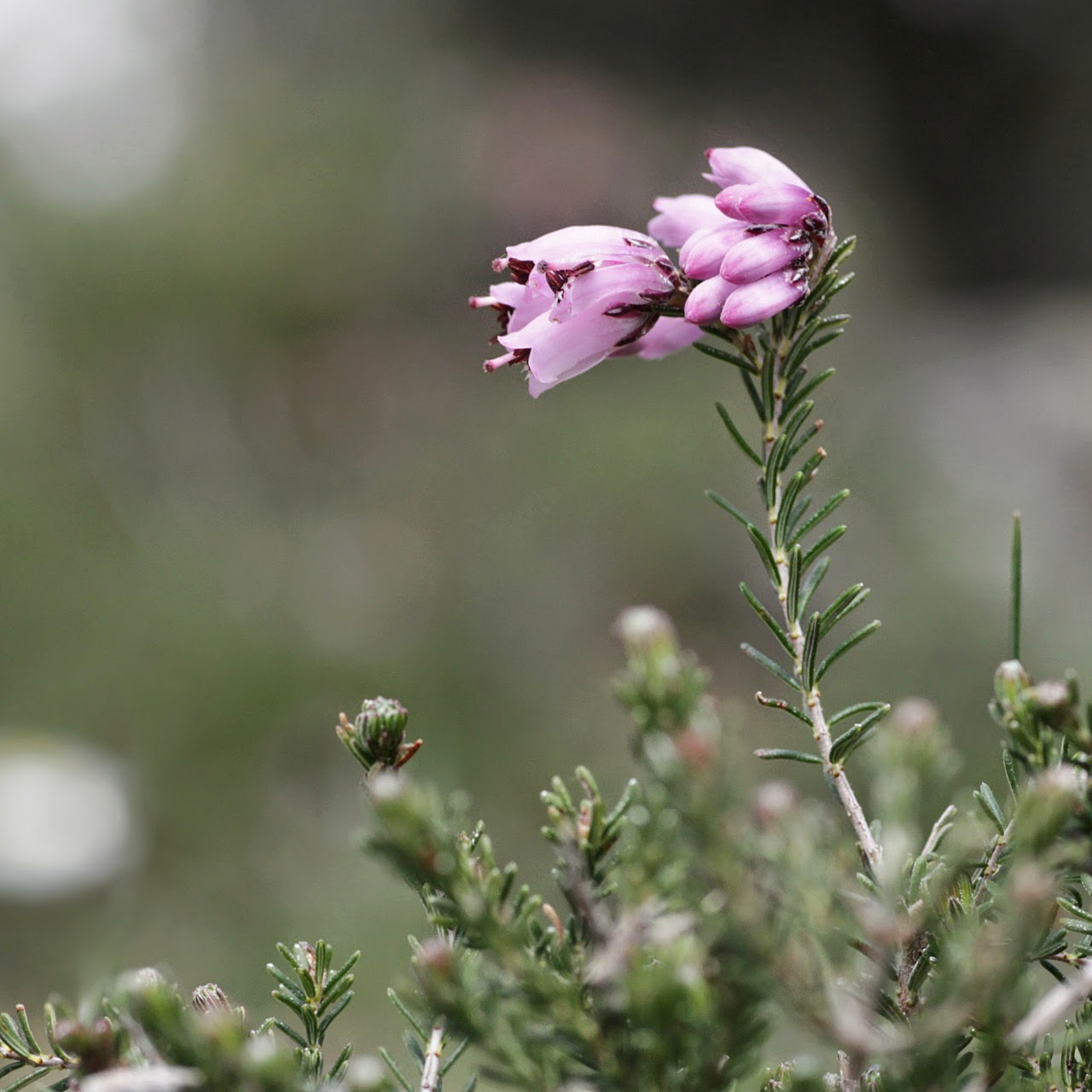 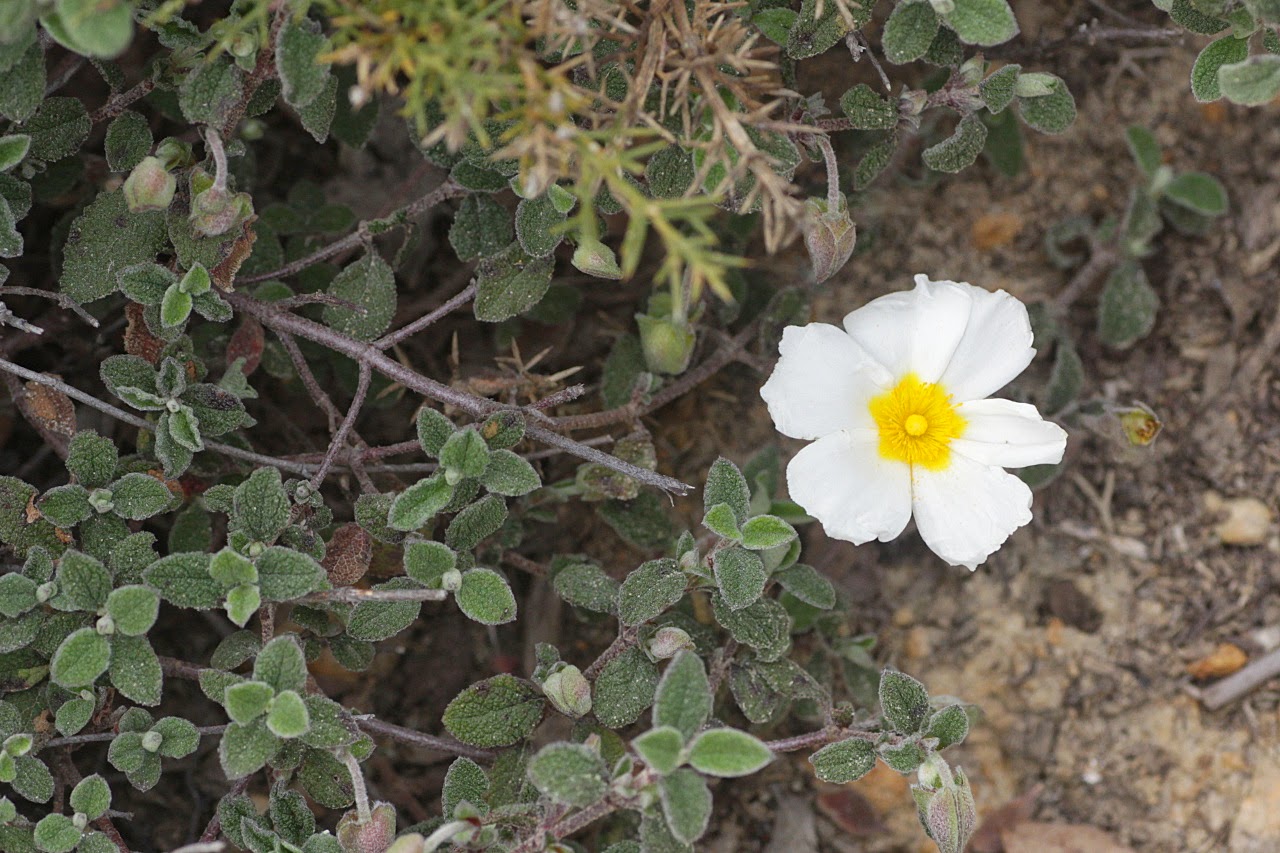 The near side of the valley is on sandstone and it supports a different flora to the limestone of most of the places I had been in.  Heathers and Cistus, both typical Mediterranean forest plants, were under the trees, but most were not yet in flower.  Just one Cistus salvifolius bloom and a couple of bushes of Erica australis gave a taste of what things might look like in a few weeks. 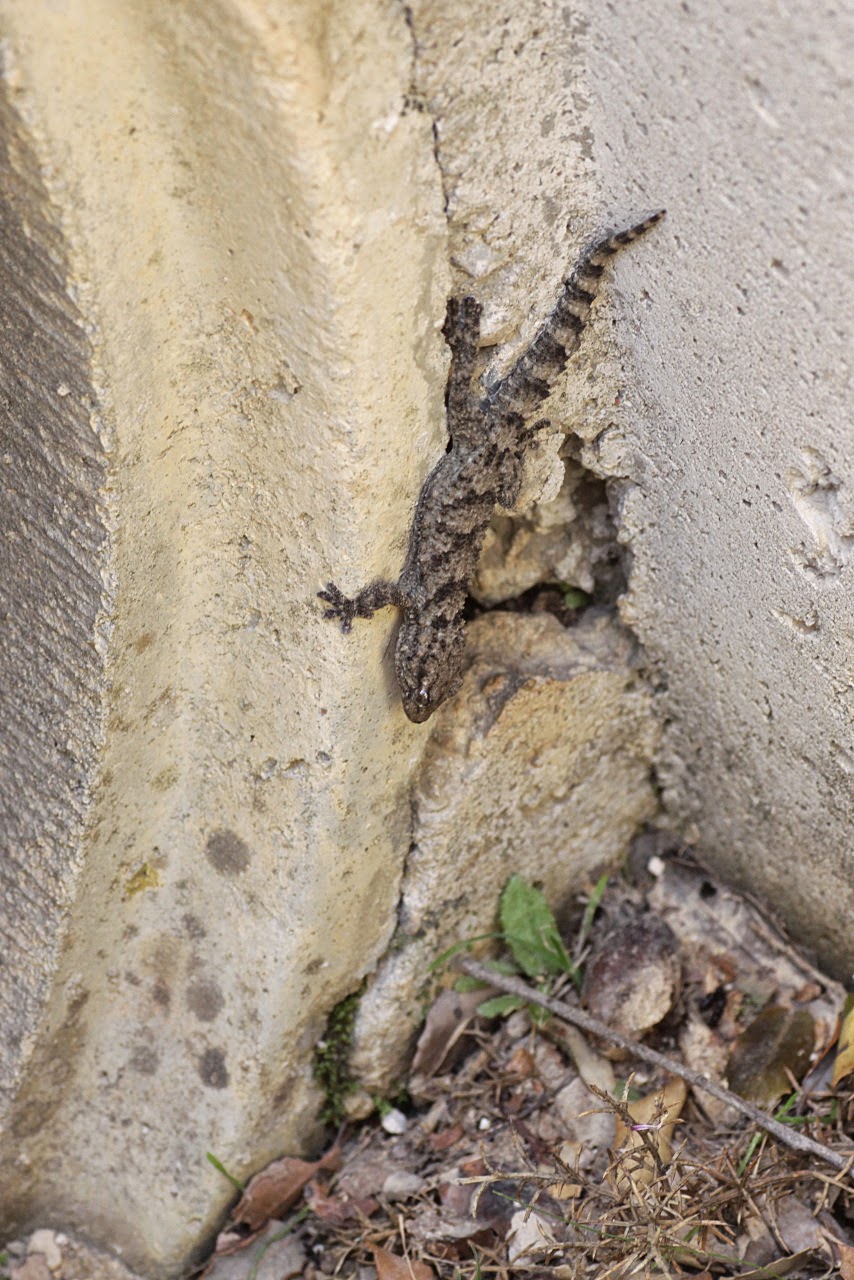 Every so often a drain ran under the track, each one with a concrete entrance, and each one home to a gecko.  These were Moorish Geckos Tarentola mauritanica, more stripy and less pink than the Turkish Gecko of the cabin, and without claws sticking out beyond the pads on their feet. 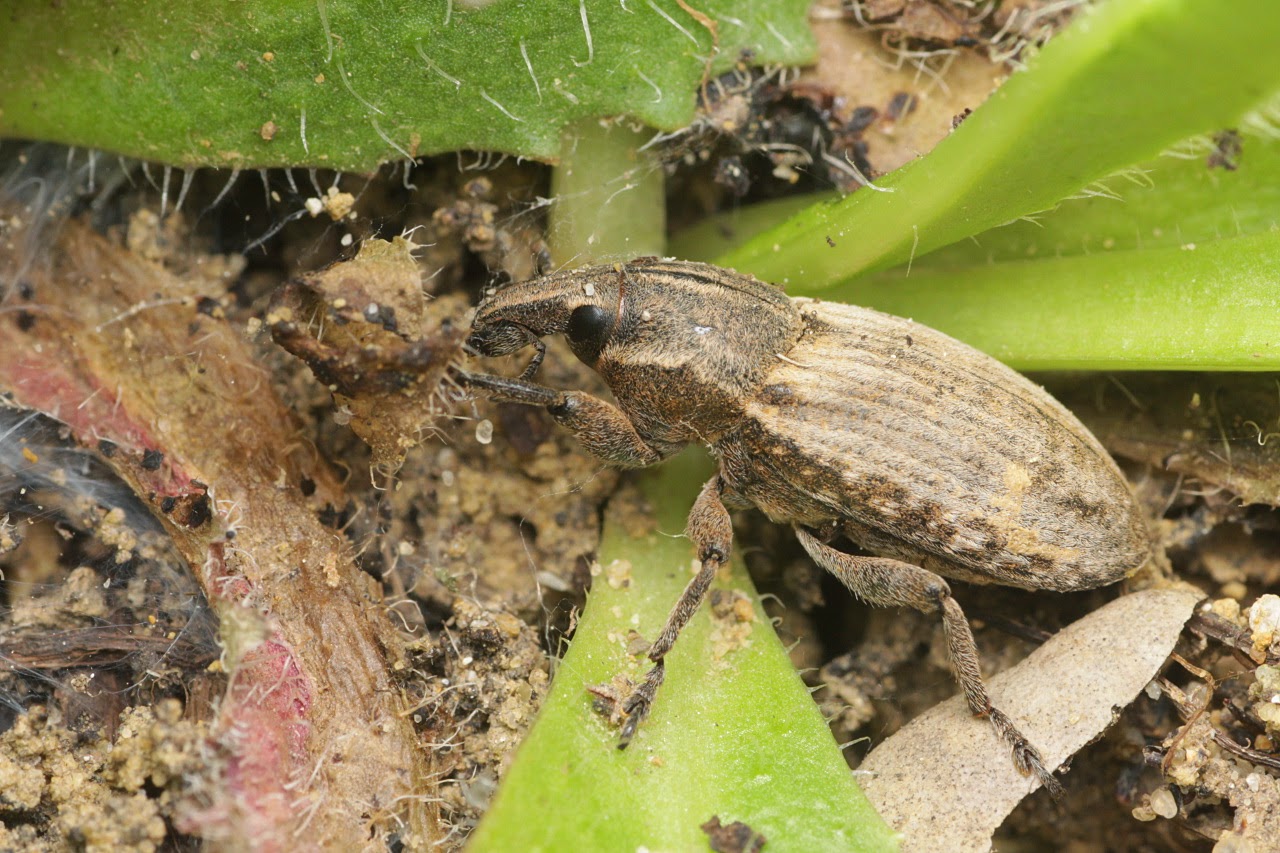 While I was carrying out a routine gecko inspection on one drain, I saw a large weevil basking on the side.  If it were British I would put a name to it, but without a Spanish weevil guide all I can do is say is that it is one of the Cleonini.  Overhead a Short-toed Eagle was calling and displaying whilst carrying a snake in its beak.  Quite a trick if you can pull it off.

At the bottom of the hill the track left the forest and I was on the plain, a wide, open grassland with patches of scrub and gorse.  On the other side the limestone mountains rose up again and carried the GR-7 long distance path with them. 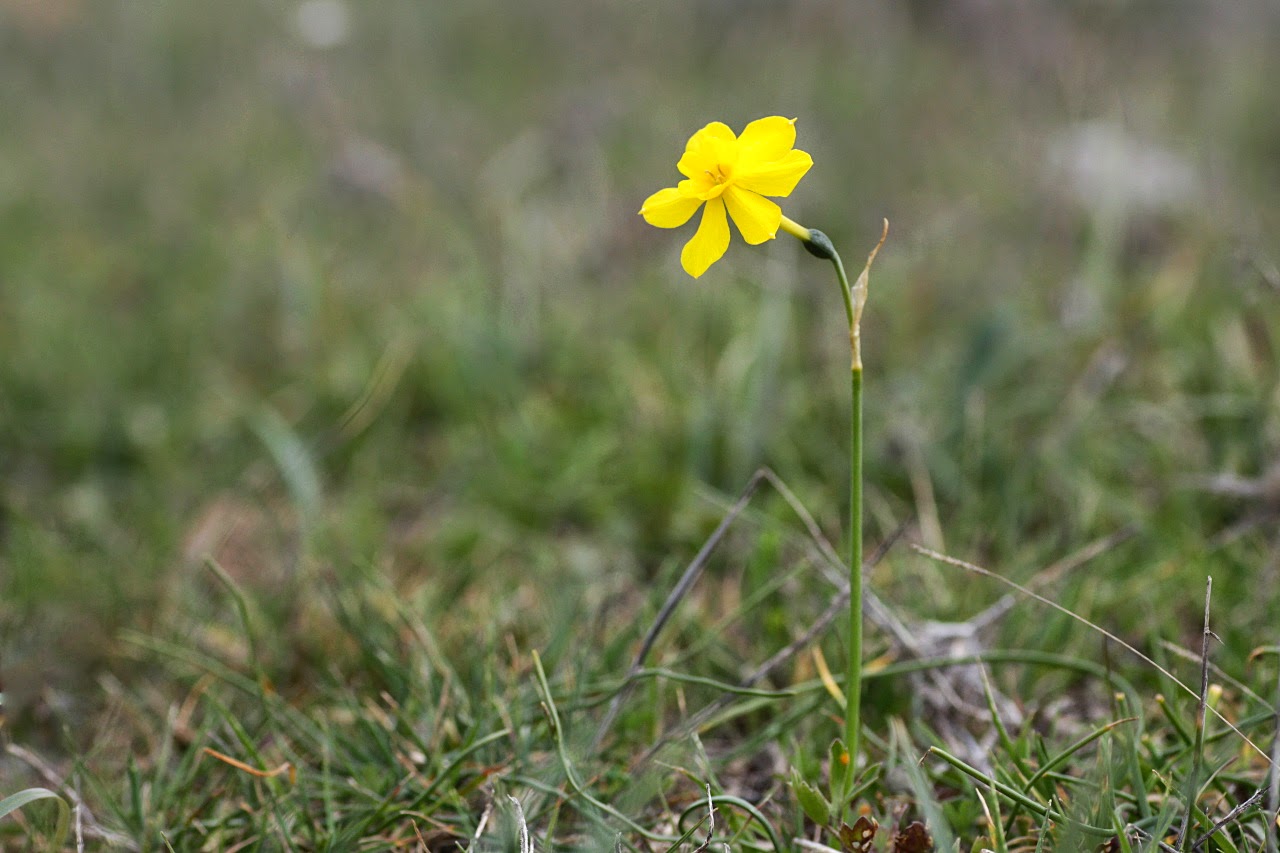 There were more jonquils here, not making a spectacular display but scattered in the grassland.  Unlike Narcissus papyraceus, which was abundant along the stream through the middle of the plain. 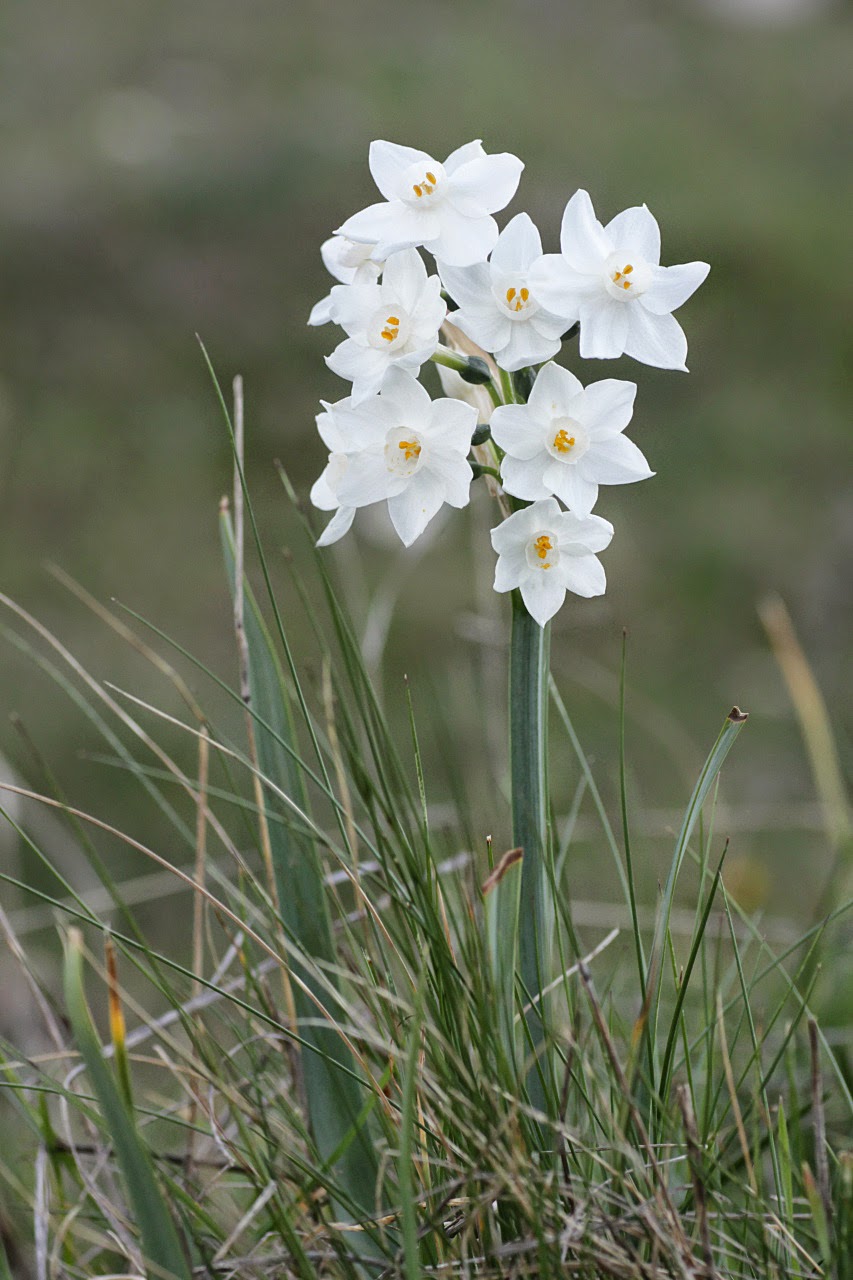 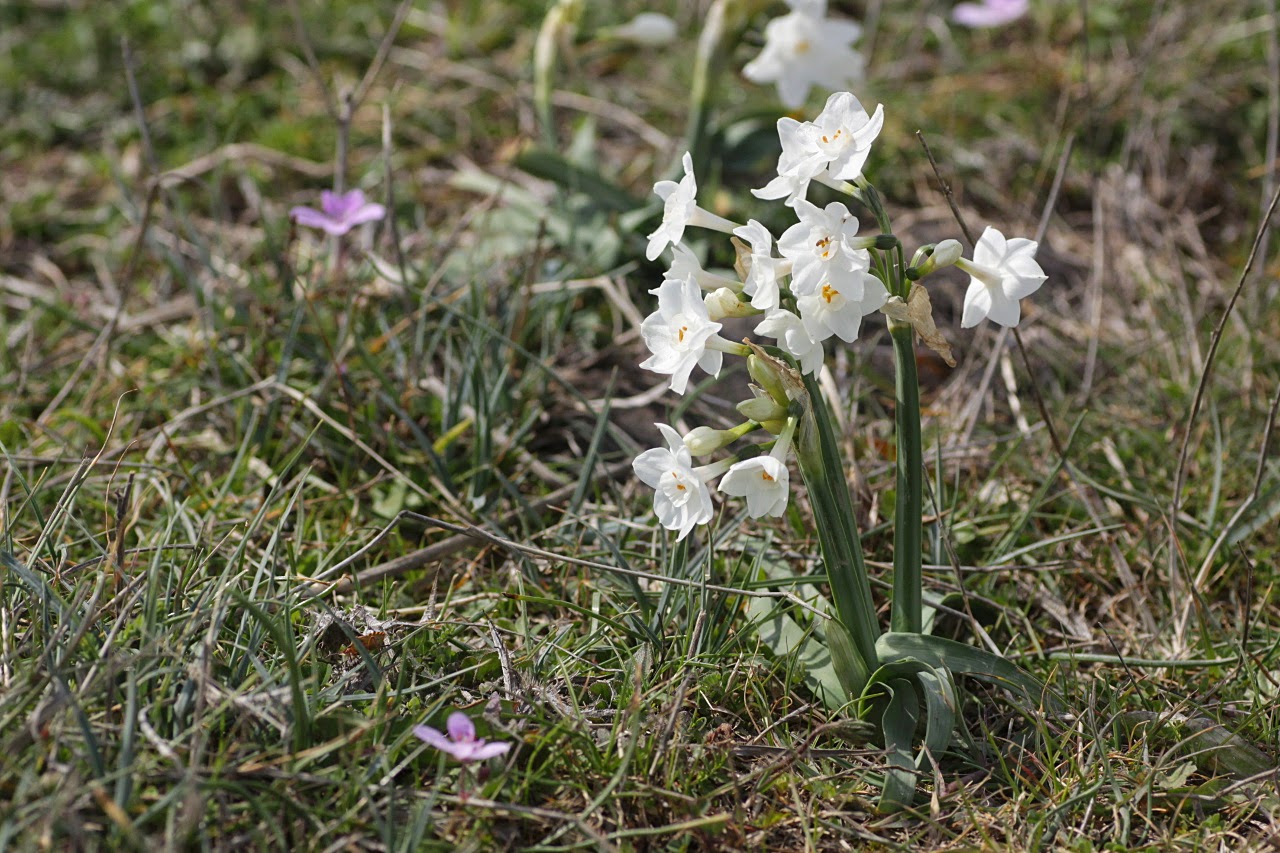 I walked across to the mountains and began the climb over the rocks up the other side.  There were still a few Iris planifolia in flower here.  I could see Narcissus cuatrecasasii on the rock faces above.  Its presence here, but not in the grassland, reinforced the impression that it and Narcissus jonquilla do not share the same places, the aloof cuatrecasasi looking down on its commoner relatives below. 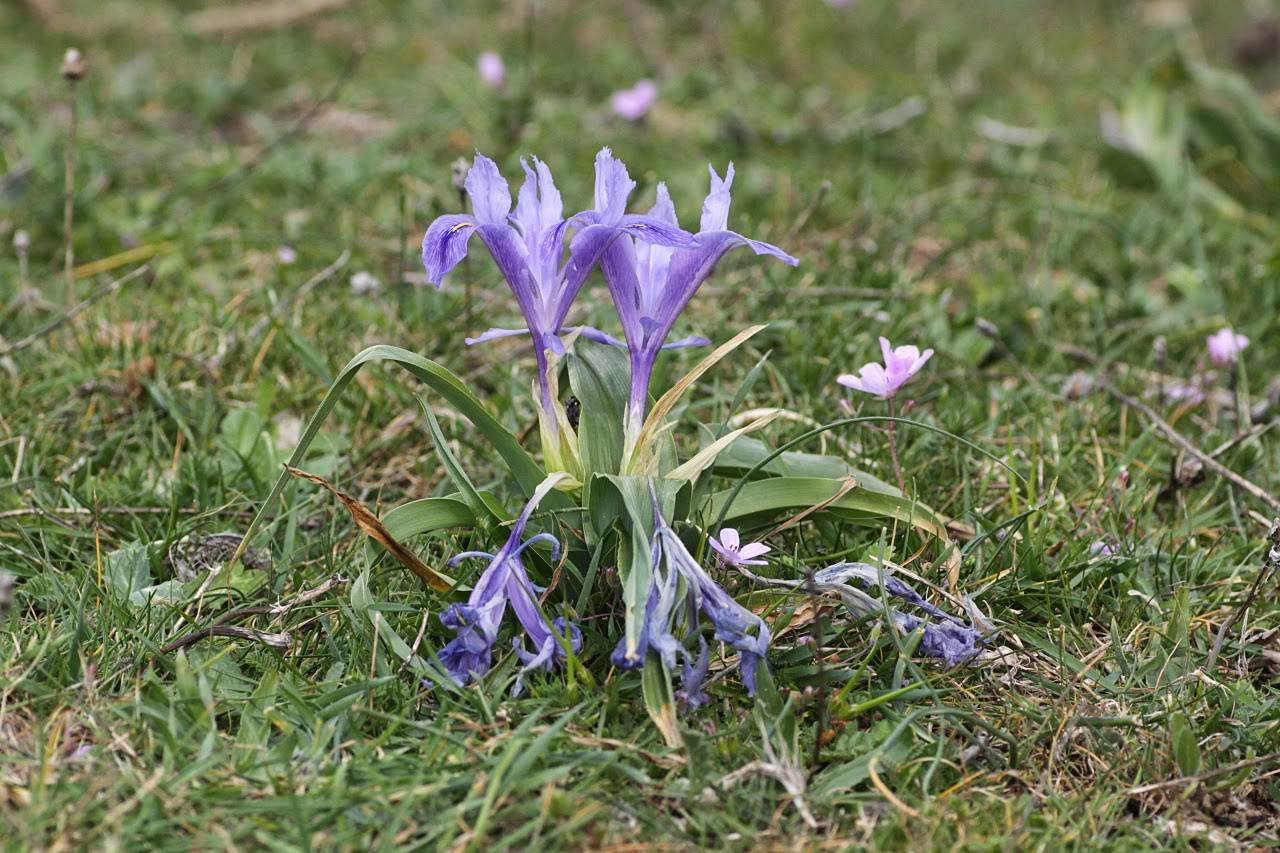 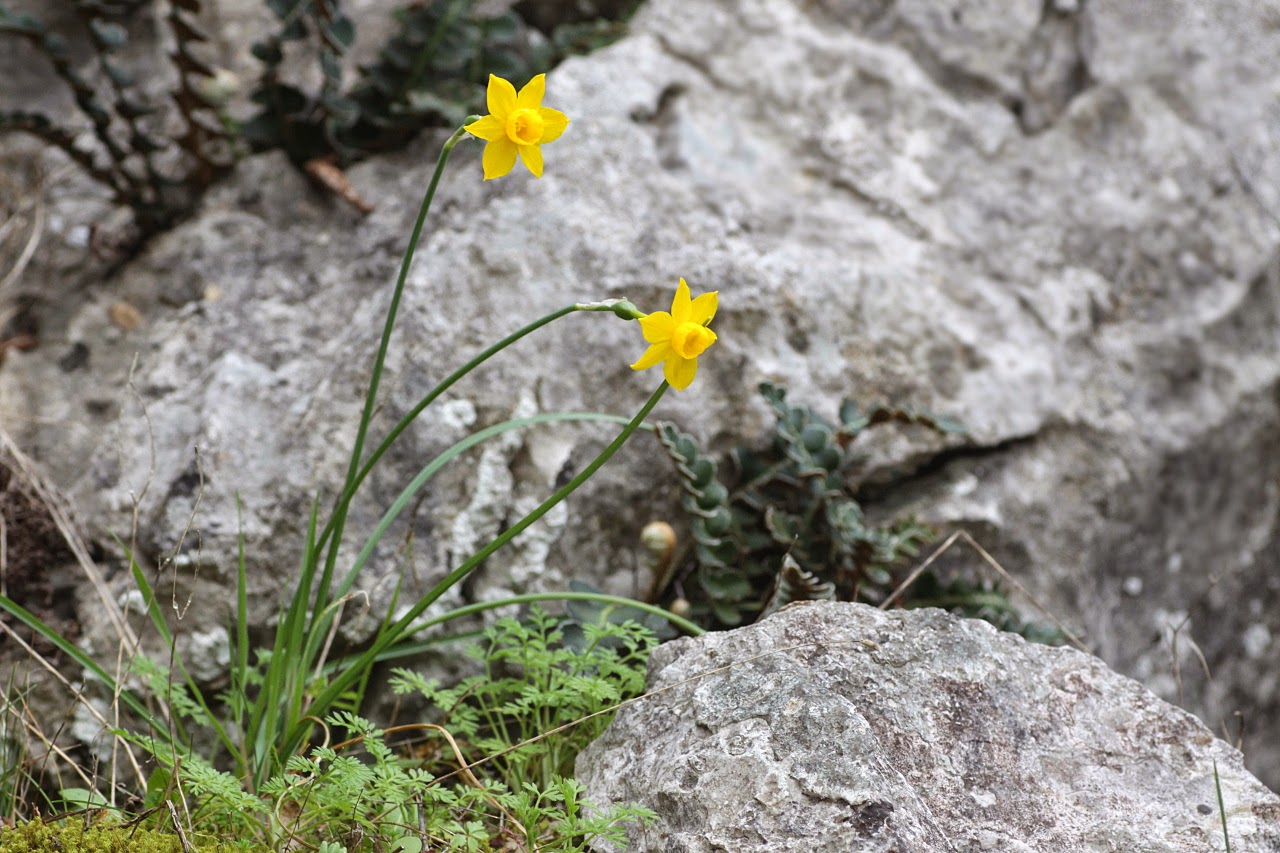 The jonquils shared their ledges with more Orchis olbiensis, whilst Vinca difformis, another reminder of the Llanos del Líbar, was in flower among the boulders. 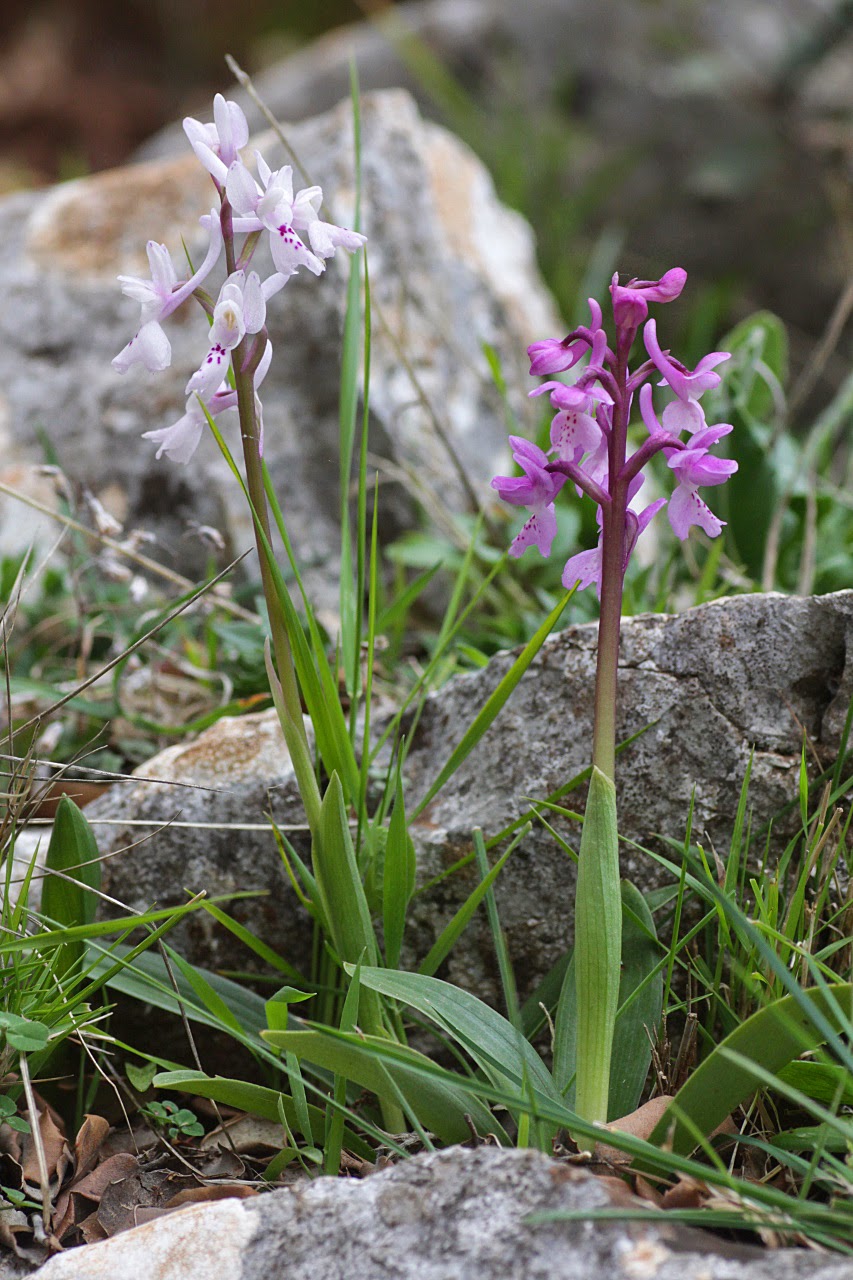 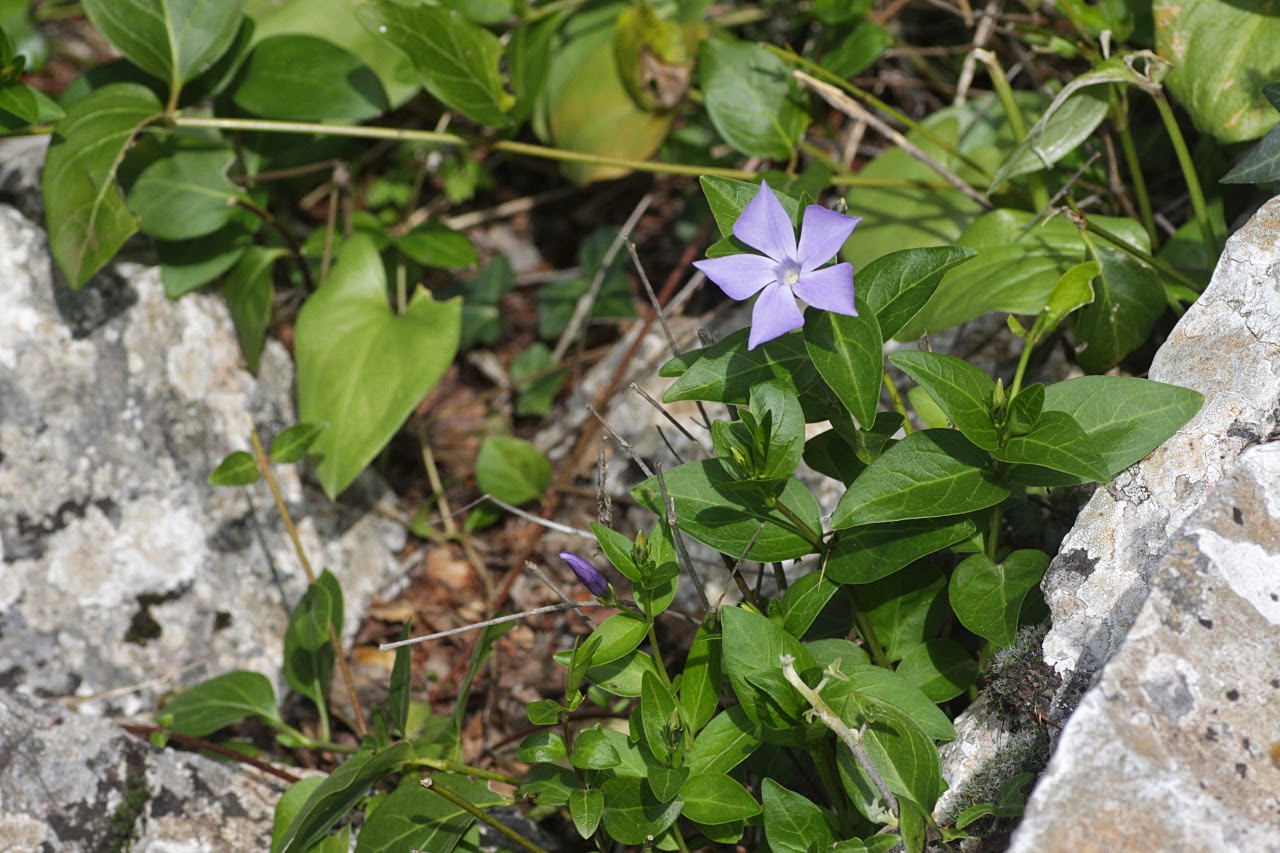 Thunder made me turn round.  I did not want to get caught in a downpour, and I could see the rain coming in, so I made I made my way much more quickly back to the car, pausing only to admire some more jonquils and satisfy myself that they were still Narcissus jonquilla. 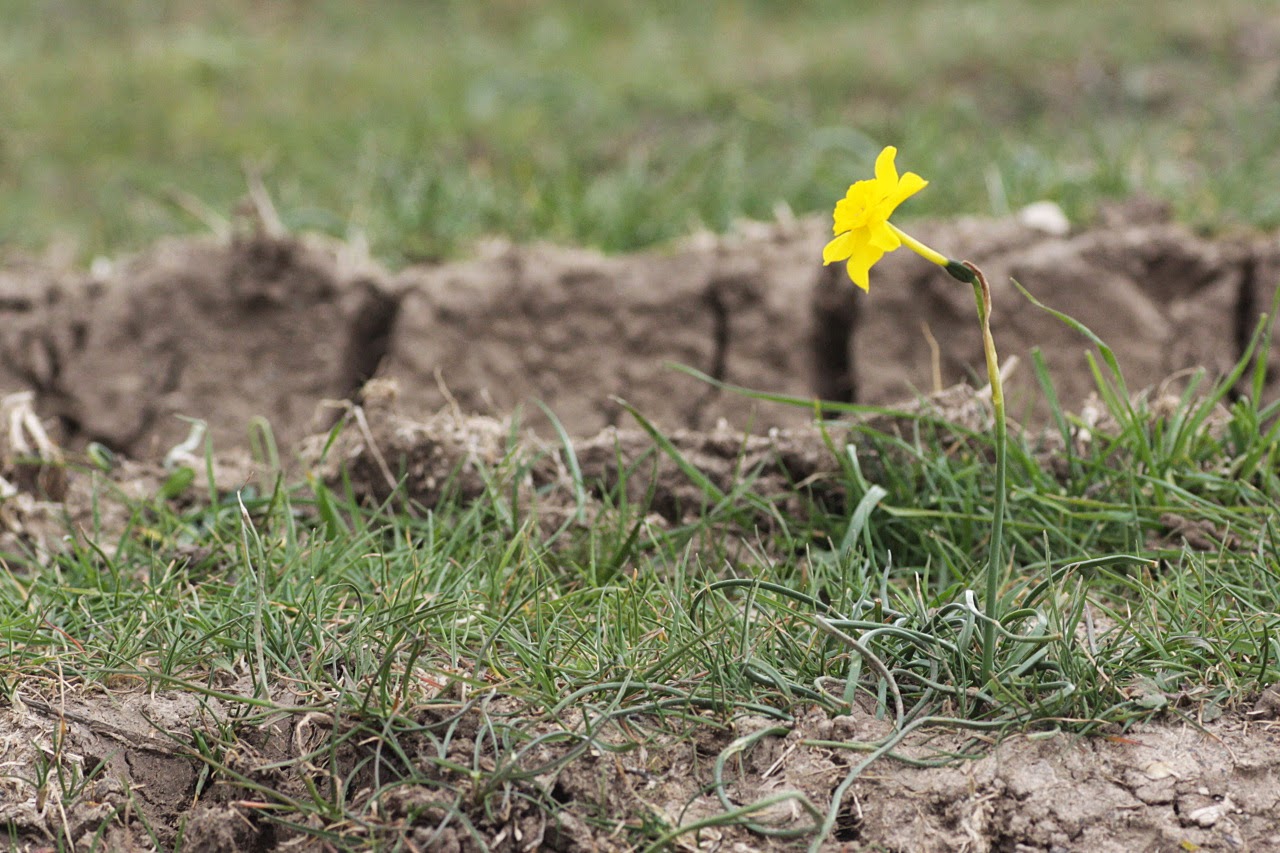 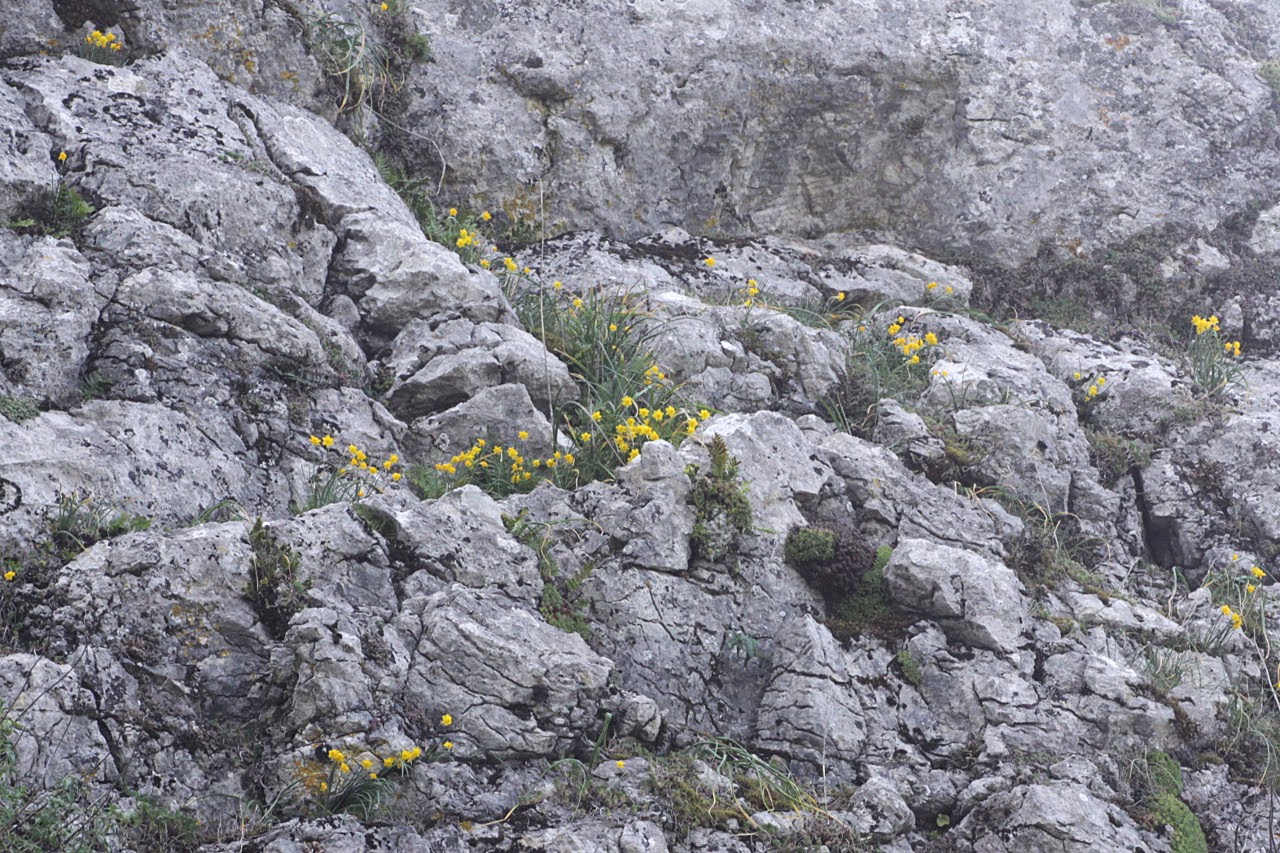 I made it back to the car park before rain and dark, in time to search the cliffs for more daffodils.  They were here; Narcissus cuatrecasasi as expected.  Now back for dinner. 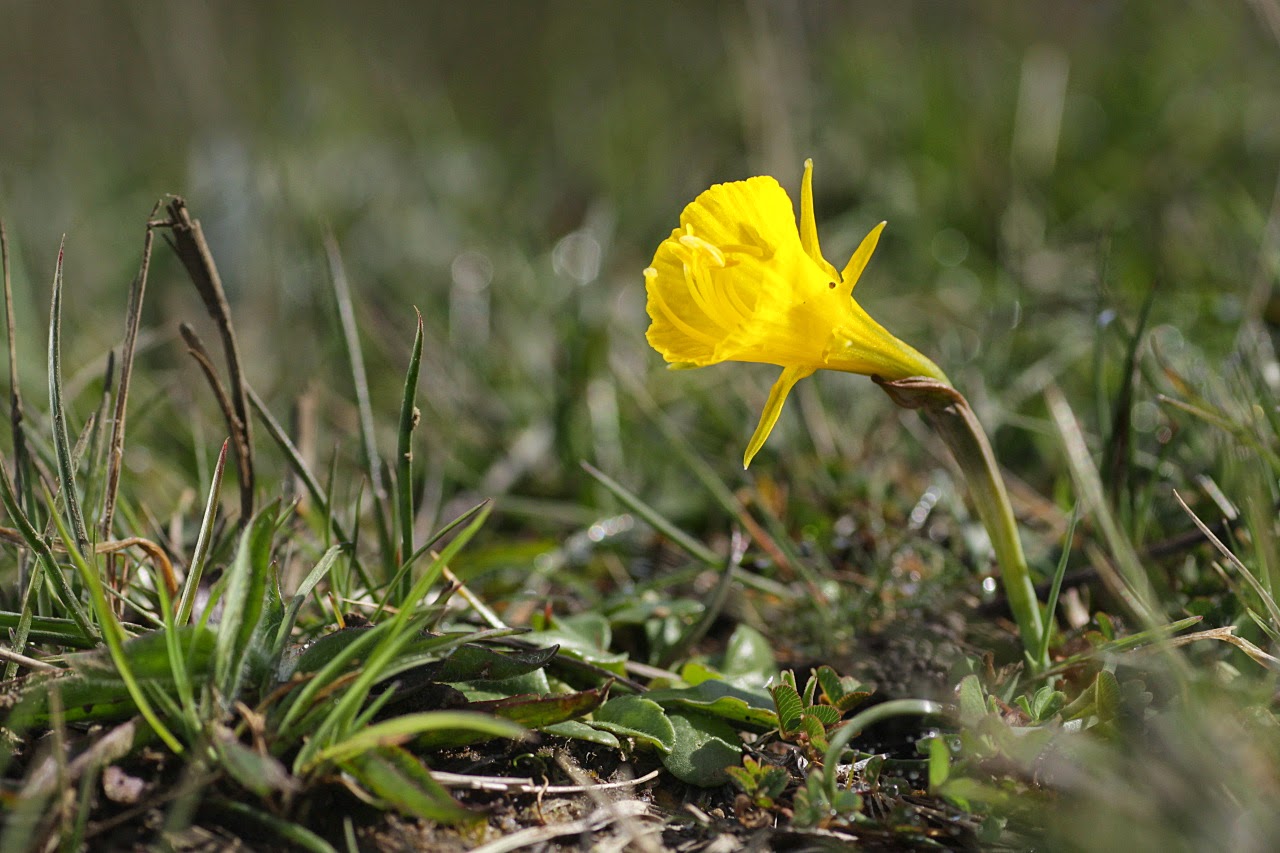