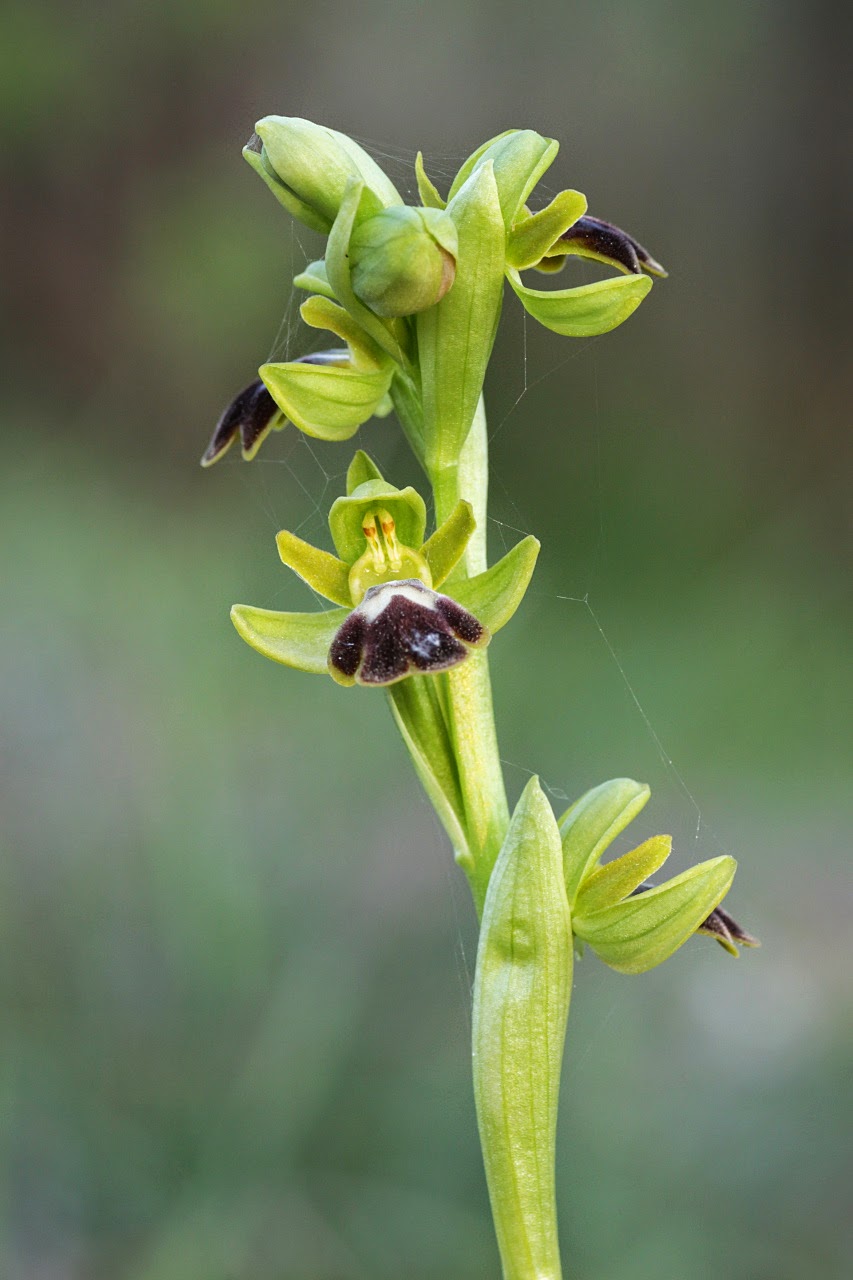 On my way out this morning I stopped to look at some of the Ophrys fusca along the path below the cabin.  Some were still in shadow, making for an easier photo.

But the cabins and their grounds would have to wait for another day.  I wanted to get to the Torcal de Antequera before it got too busy.  I was promised a breathtaking landscape and some fine plants, but I was delayed on my way by Laguna Dulce, a lake near Campillos.  There were a lot of Coots and ducks on it (including Red-crested Pochard), and several Black-necked Grebes.  A nice distraction, but it was later than I planned when I got to the Torcal, and things were already warming up.

The Torcal is a big limestone lump.  Seen from the air, it is like many of the other ridges and ranges around here, but it has weathered more spectacularly to produce towers of layered rock that look like a ruined city of an ancient civilization. 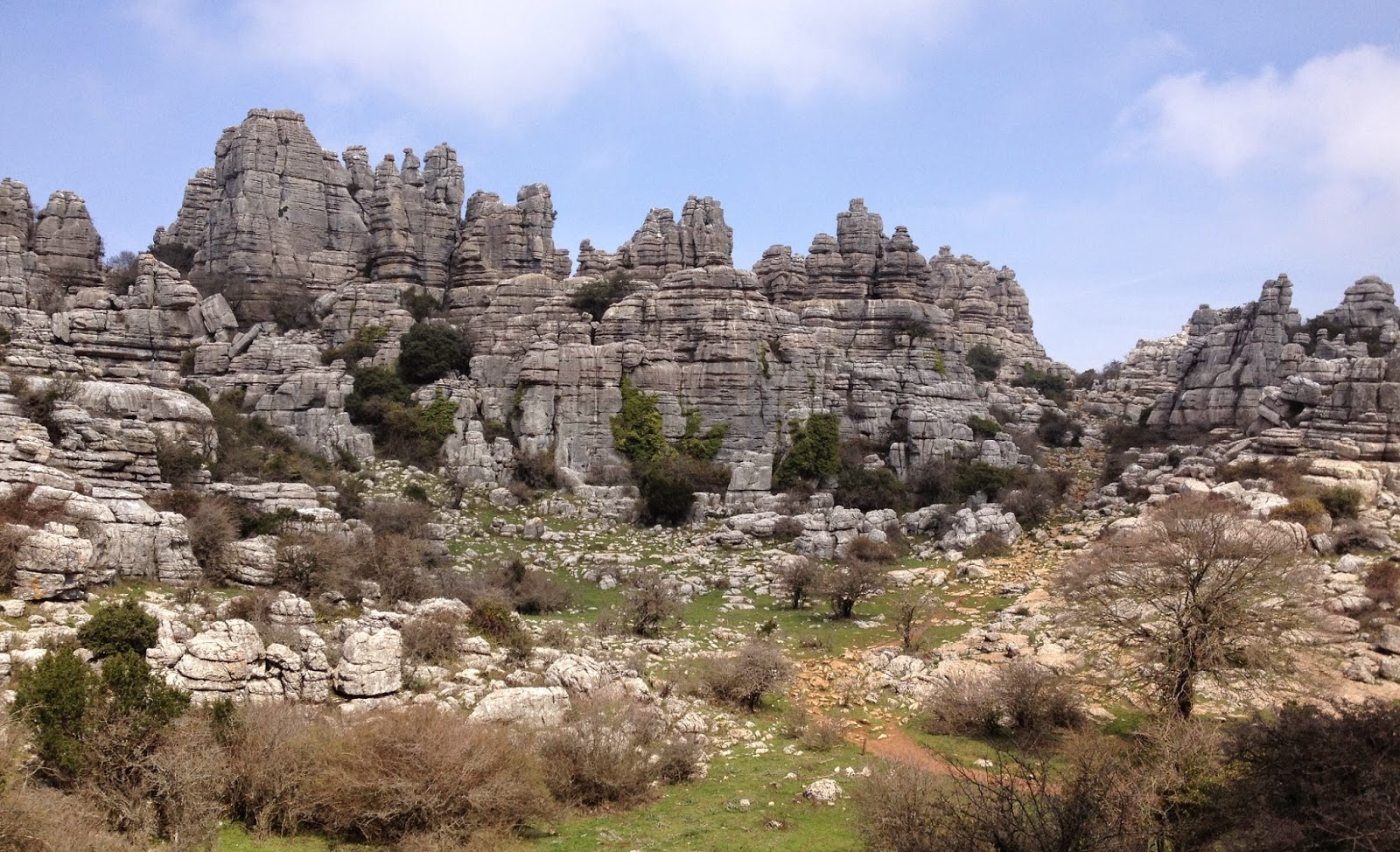 The displays of rare and limestone loving plants must appear later in the year.  As I walked through the more wooded ravines I felt as though I could have been in an abandoned quarry in southern England rather than in a hotspot of endemism and floral richness in the Mediterranean.  Ivy Hedera and Madder Rubia peregrina trailed under the Hawthorns Crataegus monogyna, and on the ground below there were Lesser Celandines Ranunculus ficaria and the odd clump of Stinking Iris Iris foetidissima and Butcher's Broom Ruscus aculeatus.  Robins, Blackbirds, and Wrens were singing from the undergrowth.  The songs of Black Redstarts and Subalpine Warblers, and the Dwarf Palms Chamaerops humilis reminded me that I was probably not at home. 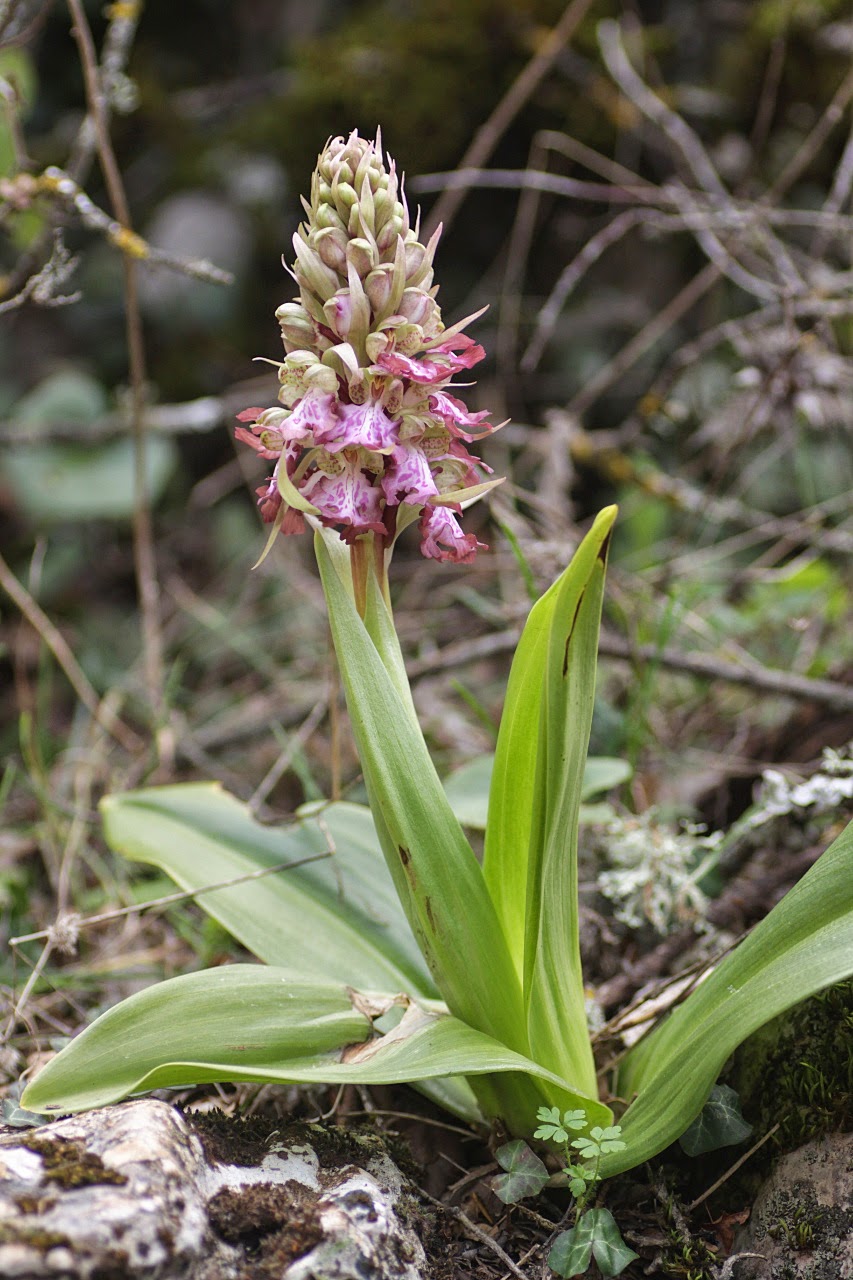 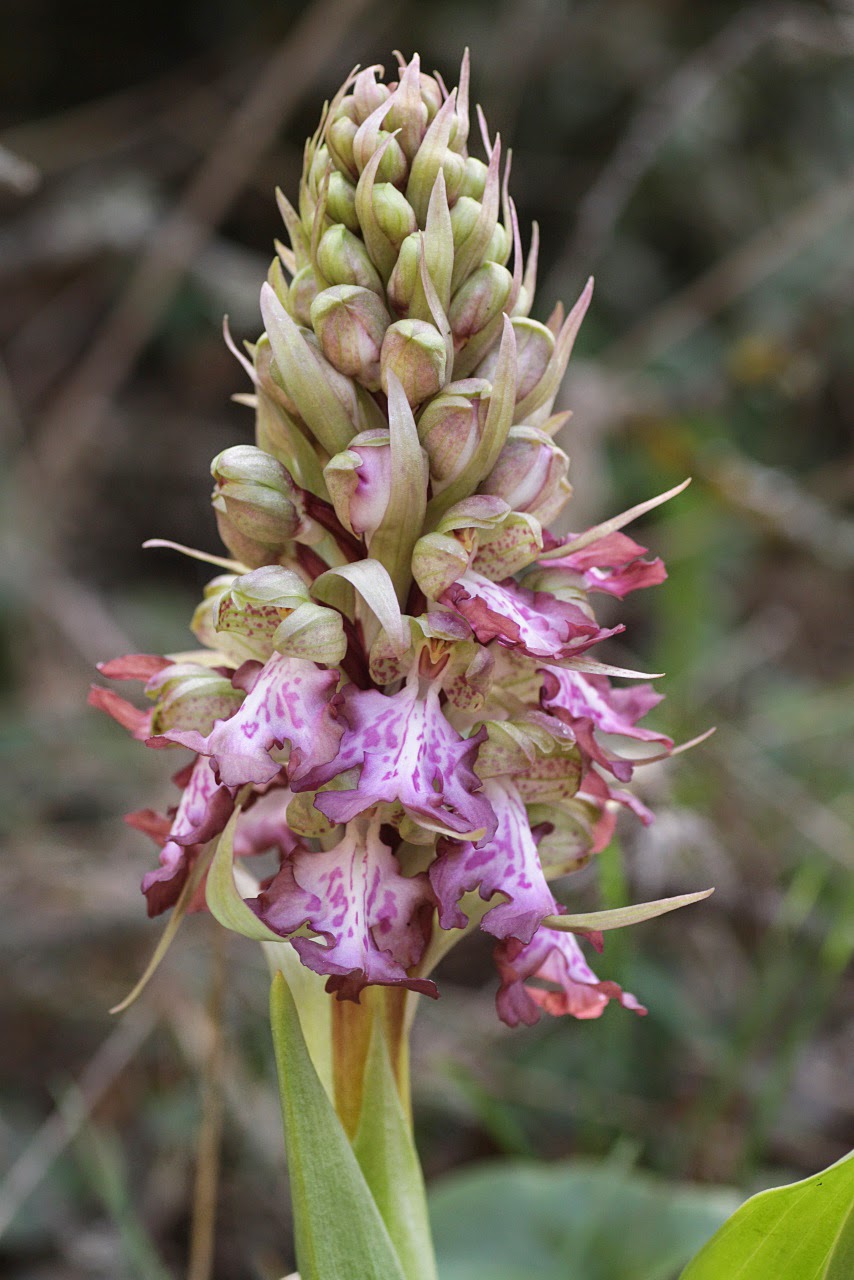 However, one of the few unfamiliar plants in flower, albeit only just blooming, was most welcome: Giant Orchid Himantoglossum robertianum.  I had not seen this huge orchid before.  It is said to be one of the earliest flowering members of its family, and if this is so, the season here was later than usual.  Giant Orchid used to get its own genus, but it seems now to be included in Himantoglossum with the Lizard Orchid Himantoglossum hircinum.  The flowers share the frilled edge and stature of the Lizard Orchid's lizard, but there is no long twisted tail, the lip being man-shaped with two arms and legs, like some of the Orchis species. 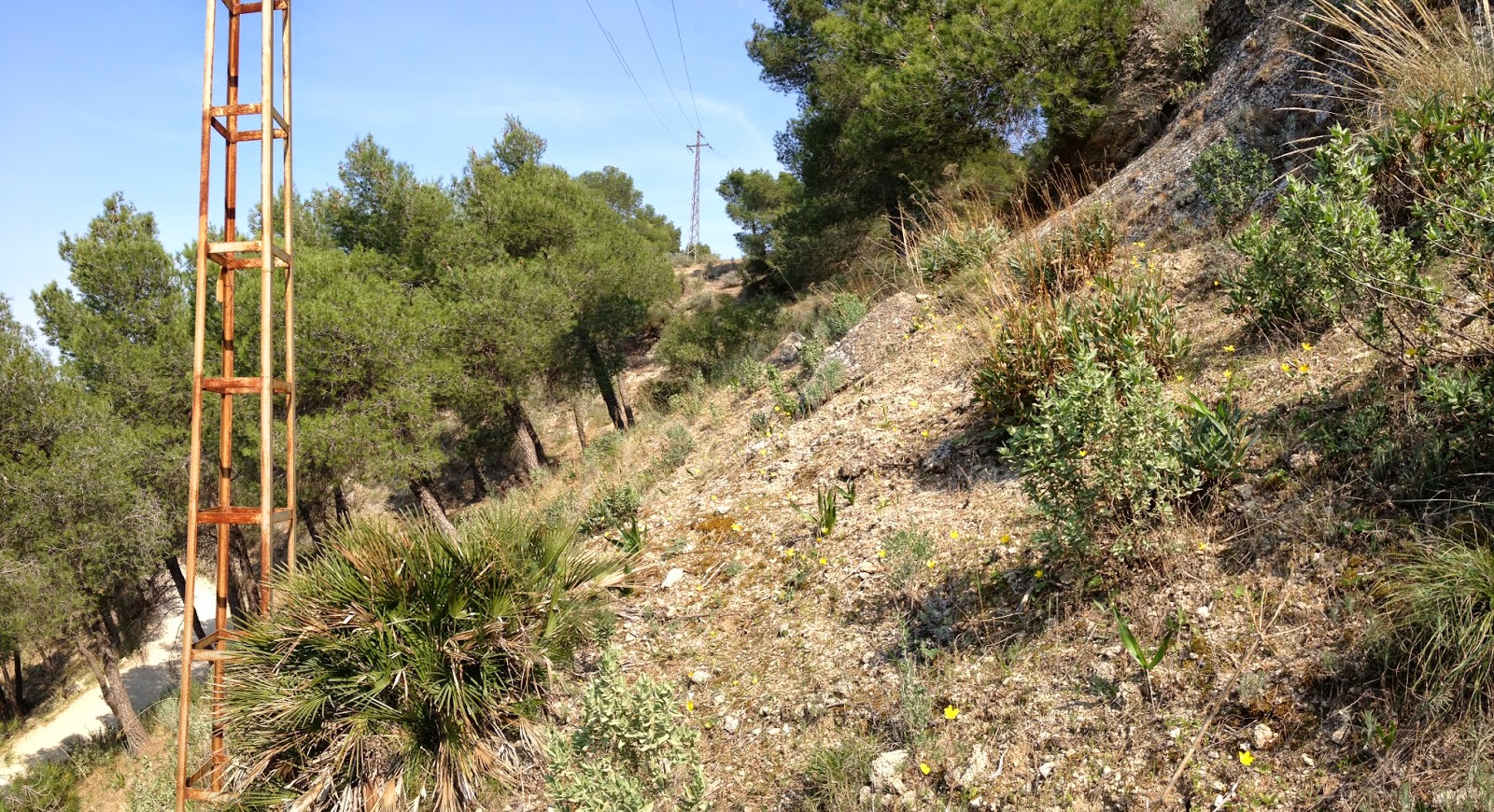 If the season was slow, perhaps it was time to go a bit lower down to see whether things were more advanced.  After lunch, I headed across country, taking a very winding road past the reservoirs to the Gaitanejo trail.  The lowland pine forest here was very different to the upland limestone vegetation I had been seeing over the last two days.  The road ran along a steep hillside, and on the uphill side I noticed Fritillaria lusitanica growing on the stony bank.  After a little climb up to see it, I found a clearing under some power lines.  As in woods back home, this was the place to find butterflies and flowers. 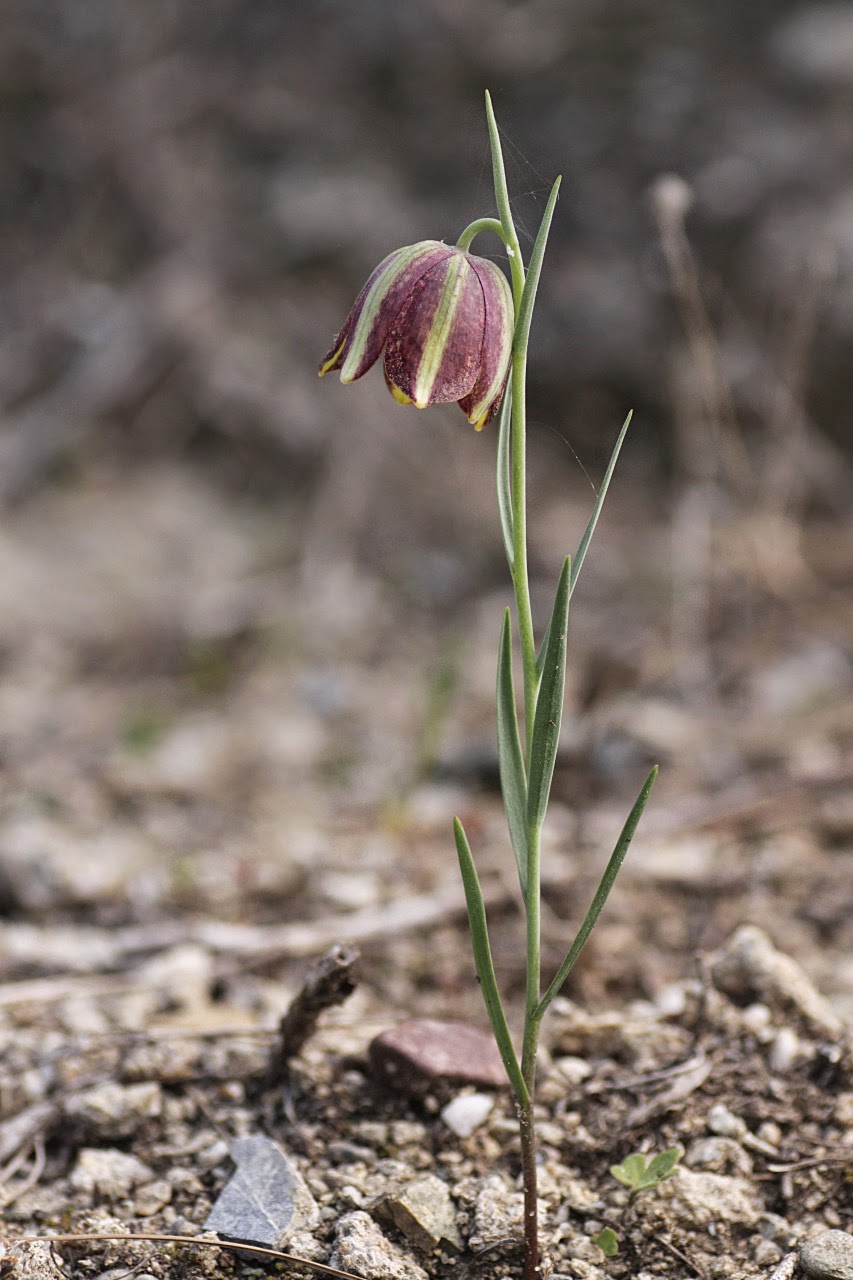 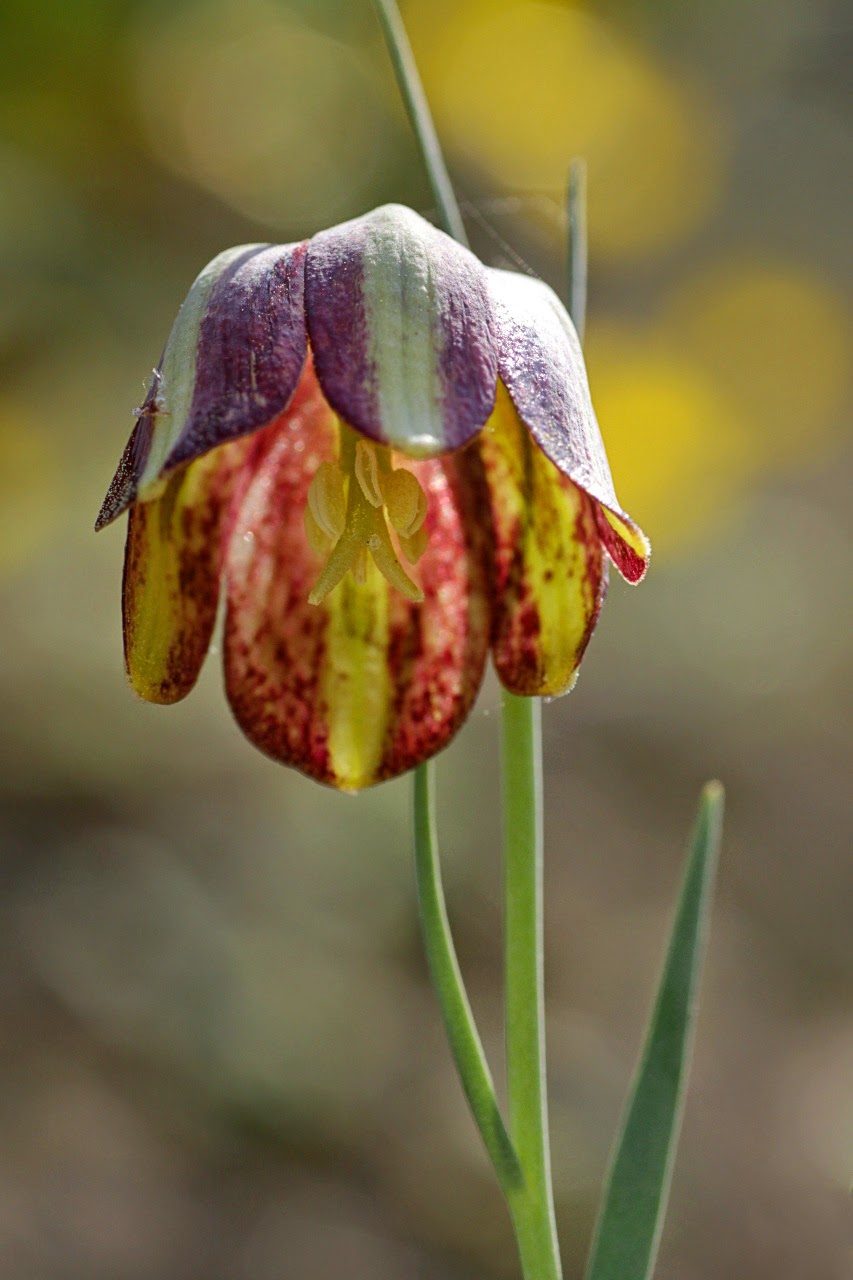 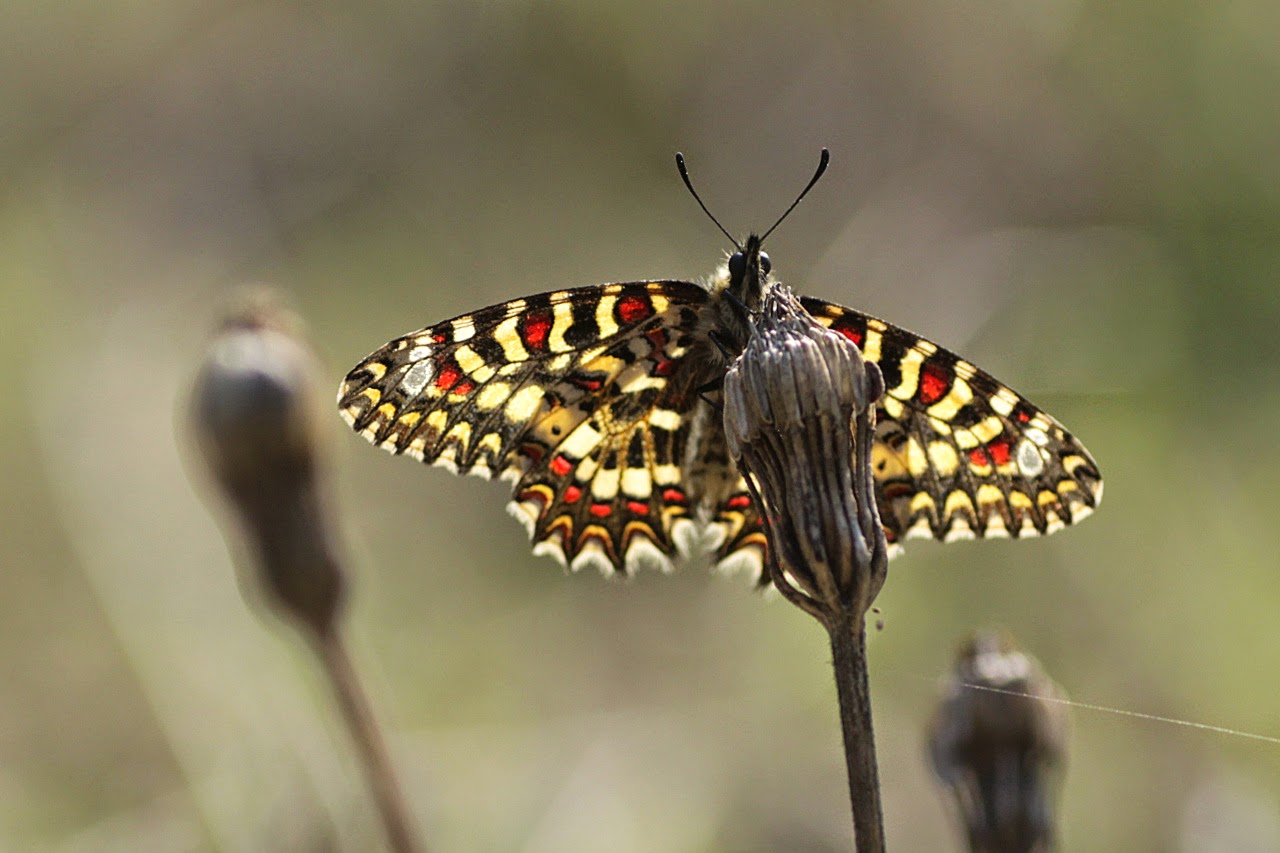 Spanish Festoons Zerynthia rumina and assorted whites were flying among the fritillaries.  A few Man Orchids Orchis anthropophora, a species familiar from chalk grassland, were here too. Scattered among these plants there were the dried remains of a narrow-leaved Narcissus.  The season may be late, but not late enough for some things, it seems. 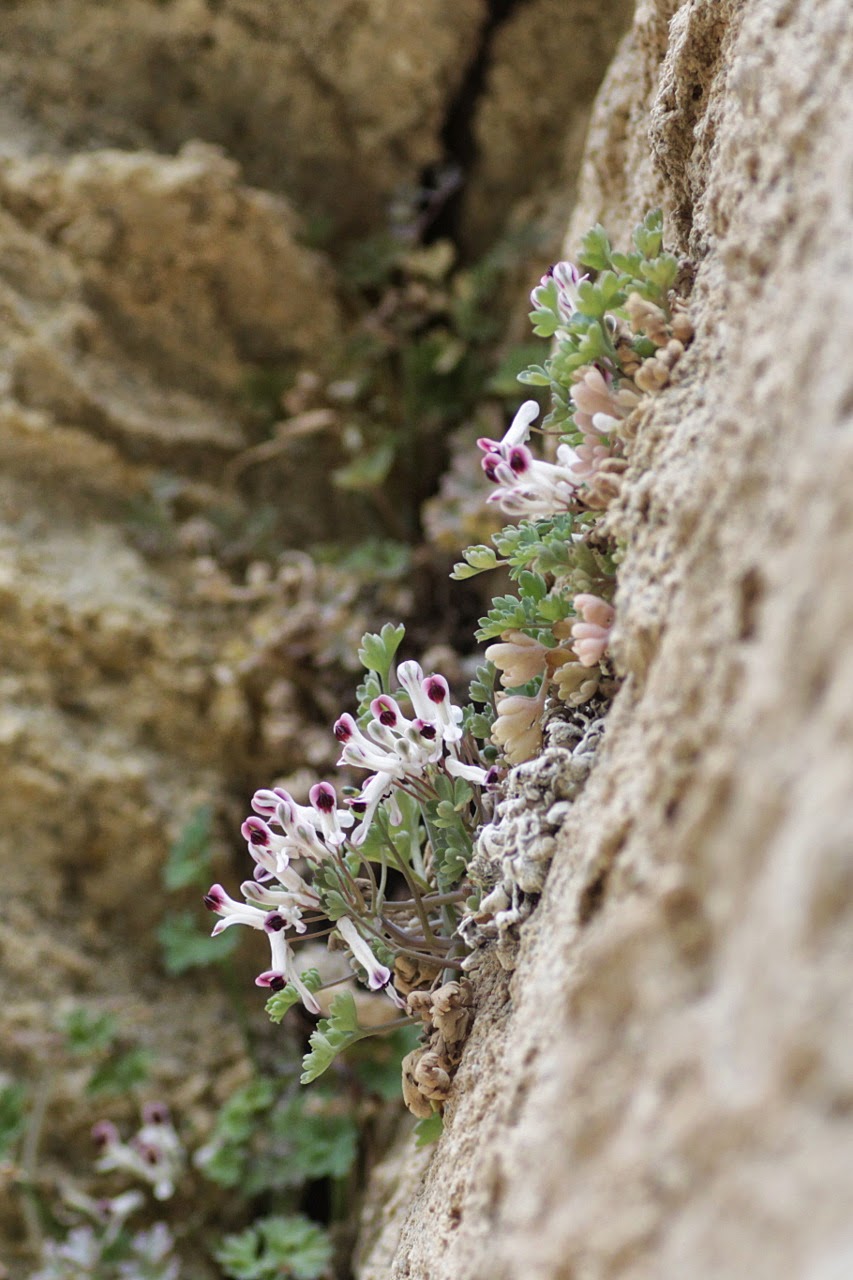 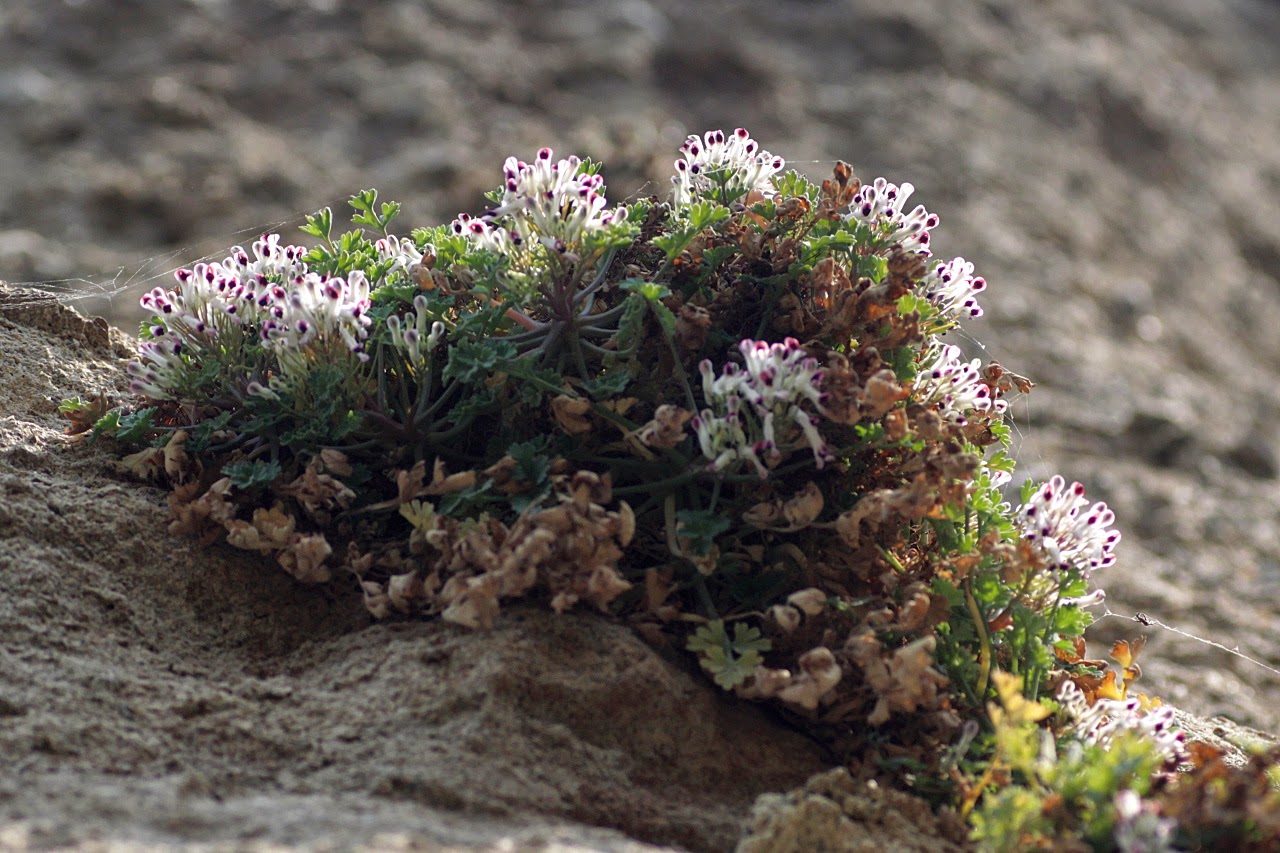 Never mind.  There was compensation from a large and spectacular fumitory growing out of reach on small ledges and in cracks in the rock faces above me.  I climbed round to try to get closer, and found some growing lower down, where it could be appreciated by even the shortest botanist. 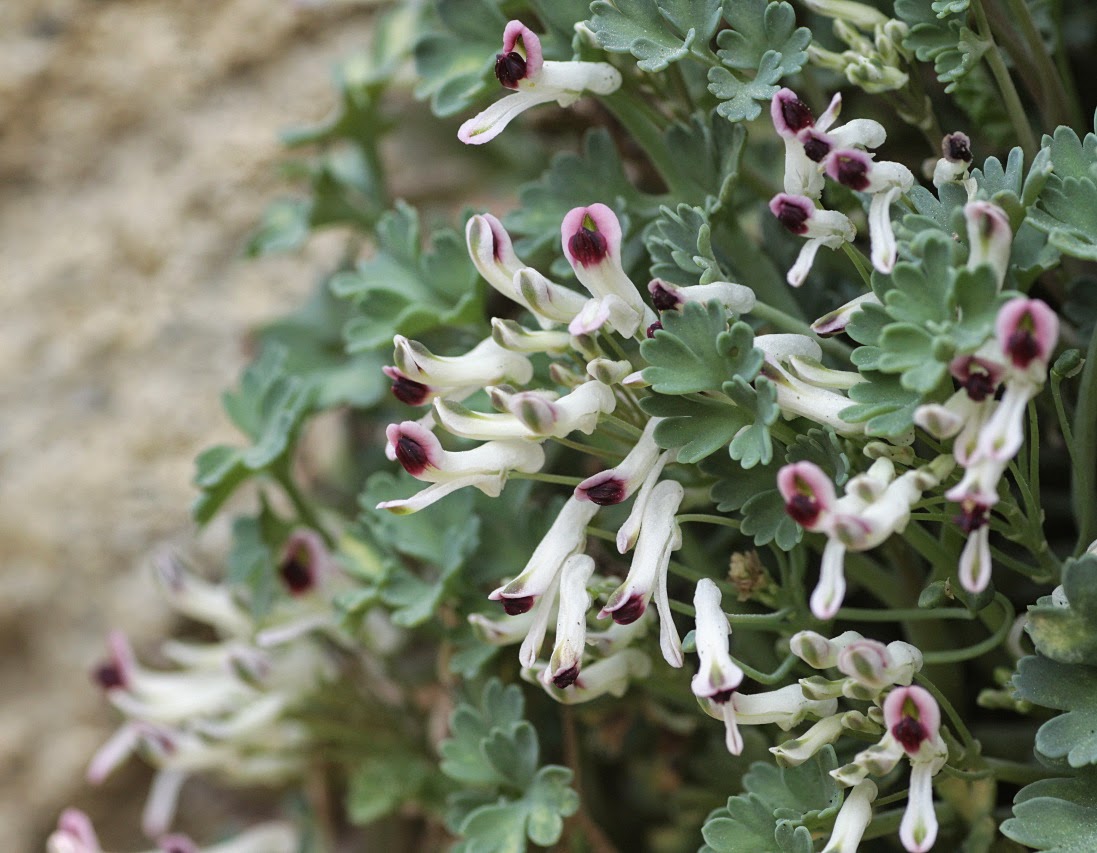 This was unlike any fumitory I had seen before.  The flowers were unmistakably those of a fumitory, but they were sitting on small cushions of leaves quite unlike the trailing or untidy stems of the weeds that I am used to seeing in chalky East Anglian fields or along country lanes in the West Country.  Perhaps not a fumitory proper, this is a close relative, Rupicapnos africana, another species shared between the Betic mountains and northern Africa.  It is rare in Spain, where it seems to occupy an narrow niche defined by microclimate, rock substrate, and low nutrient levels. 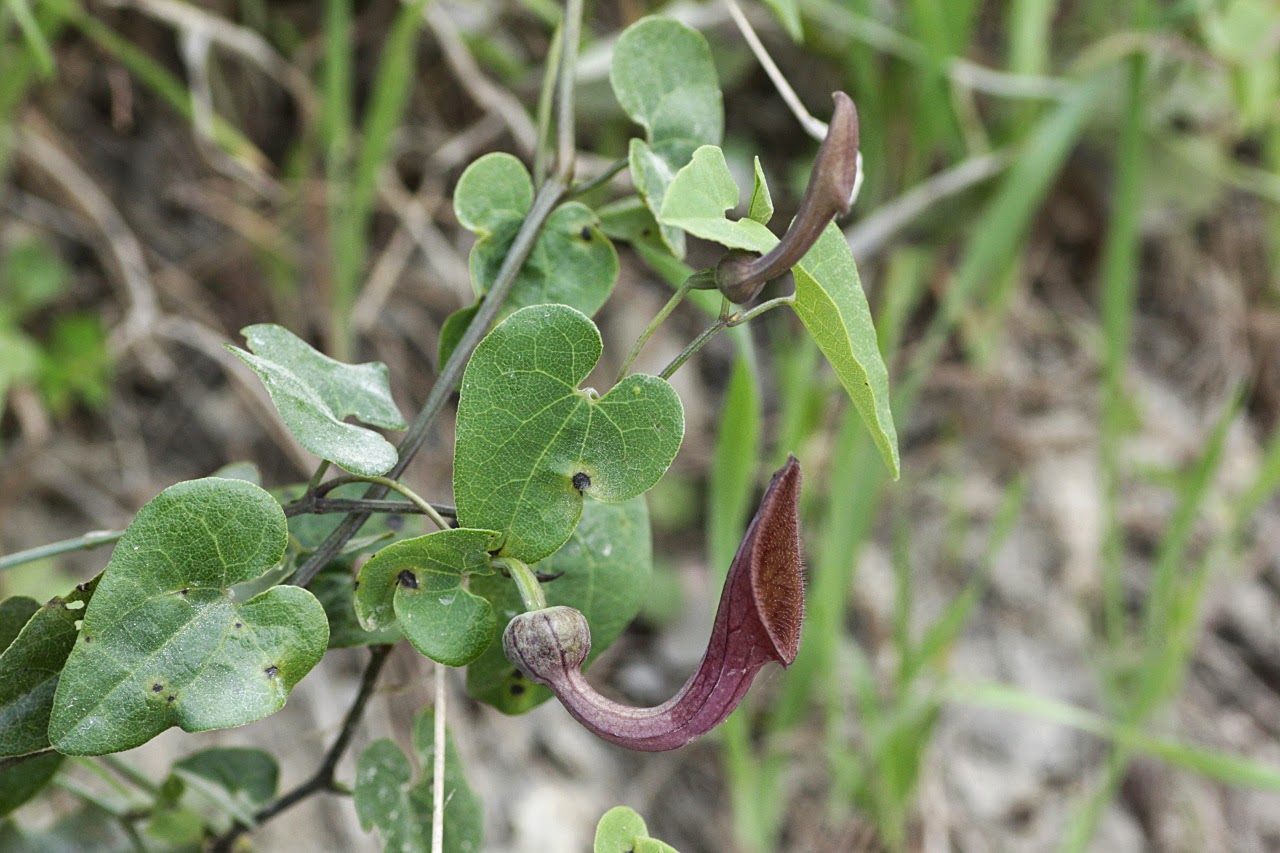 Below it was another Betic species, Aristolochia baetica.  This one is much less fussy than the rock fumitory, but it has equally distinctive flowers.

Most of the pine woods were open and dry, as you can see above, but where the trail crossed over the ridge there was a stand where the grass was green and the ground was less parched.  I thought that if there was any chance of finding a Narcissus that had not yet shrivelled up it would be here.  I scanned the ground and was delighted to find a small white trumpet half hidden among the grass. 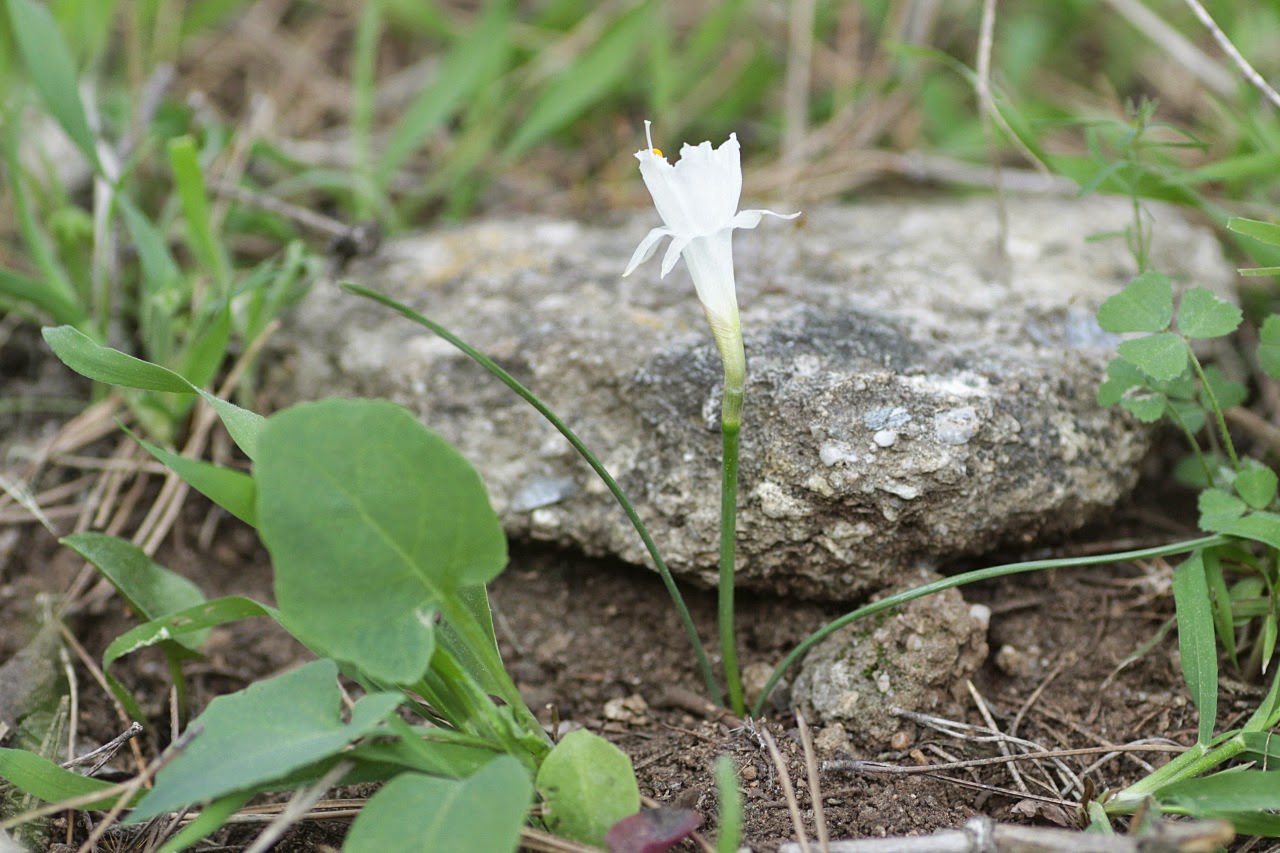 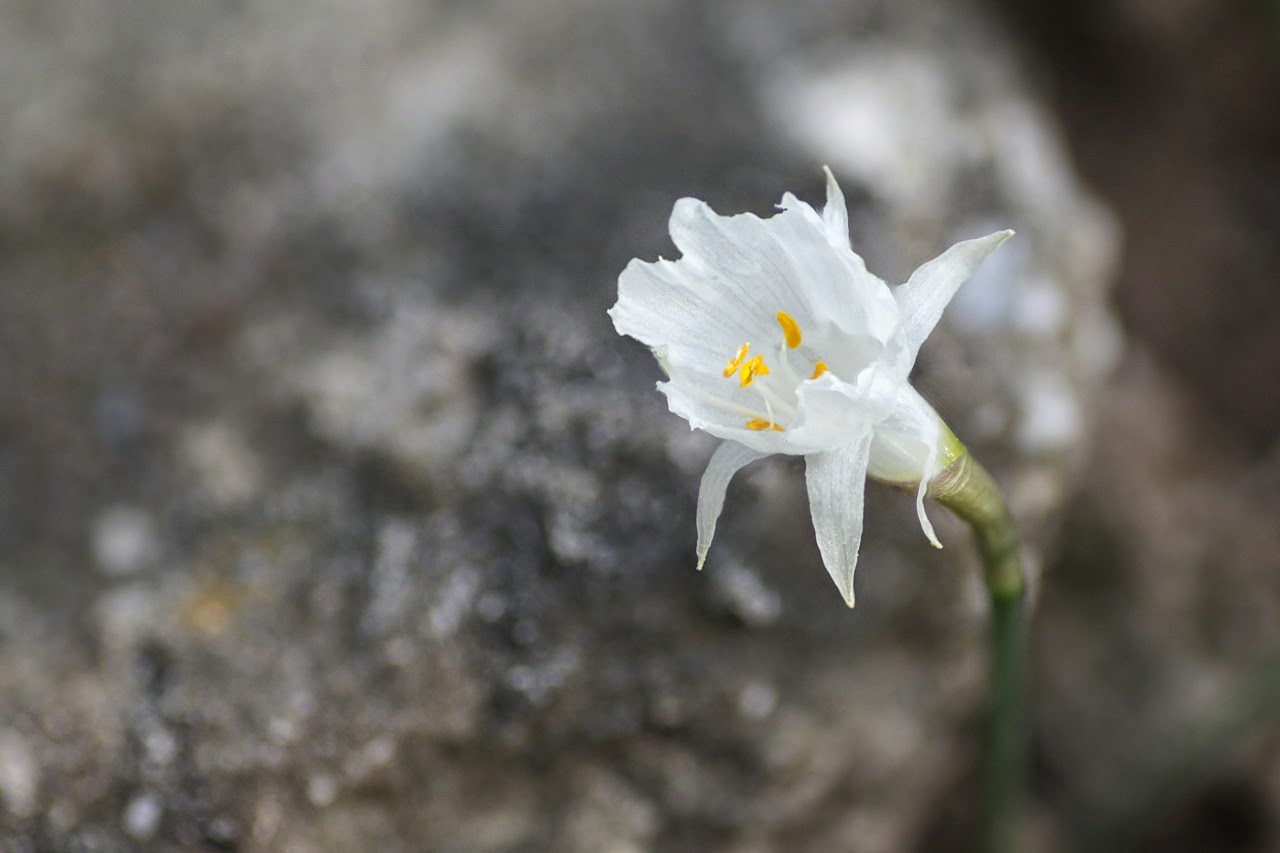 This is Narcissus cantabricus.  Its English name of White Peticoat-hoop Daffodil is so silly and unwieldy that I shall not use it again.  The plant is a member of section Bolbocodium, which has tiny, thin petals and a large conical trumpet.  Only one European member of this section has pure white flowers; unsurprisingly, this is it. 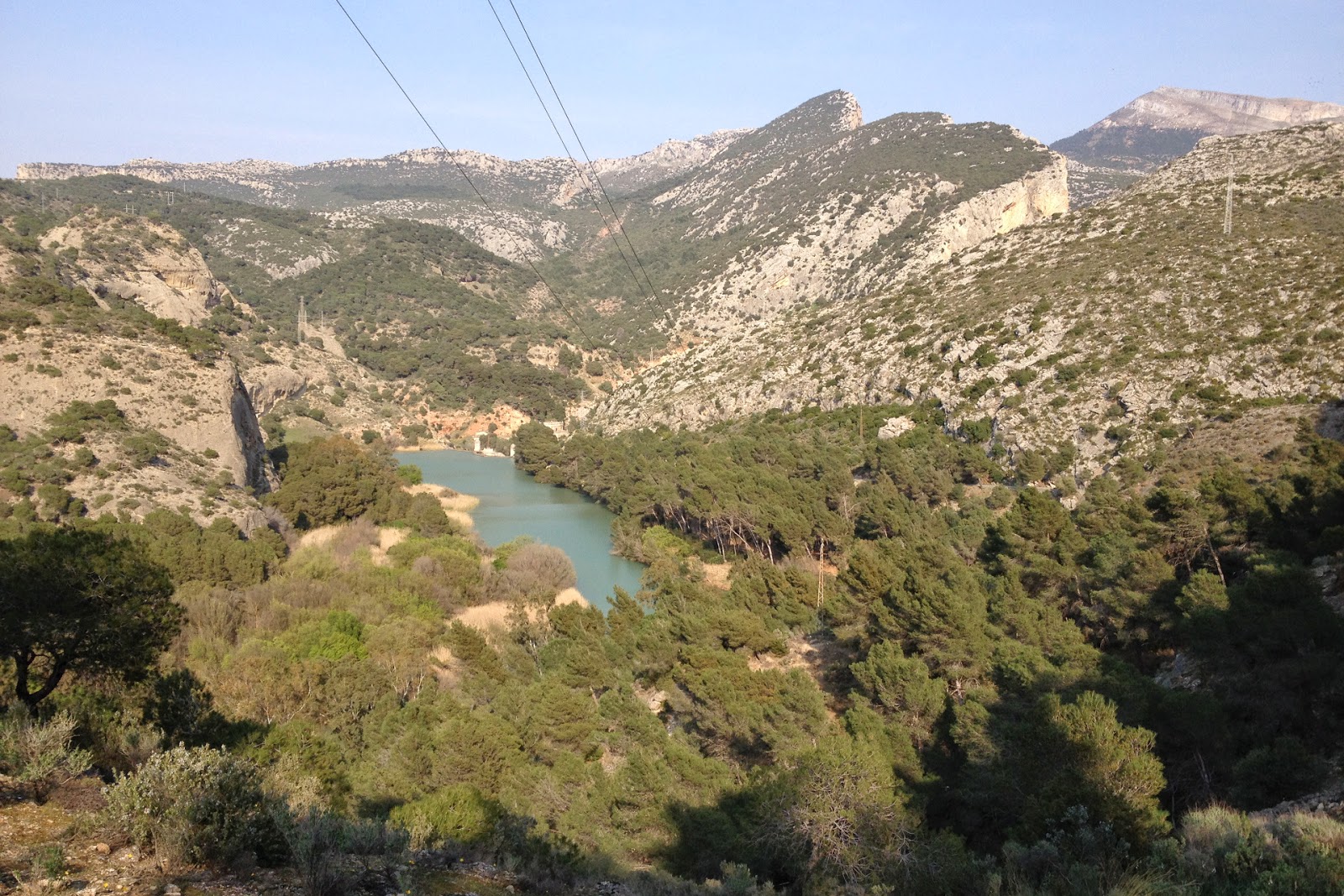 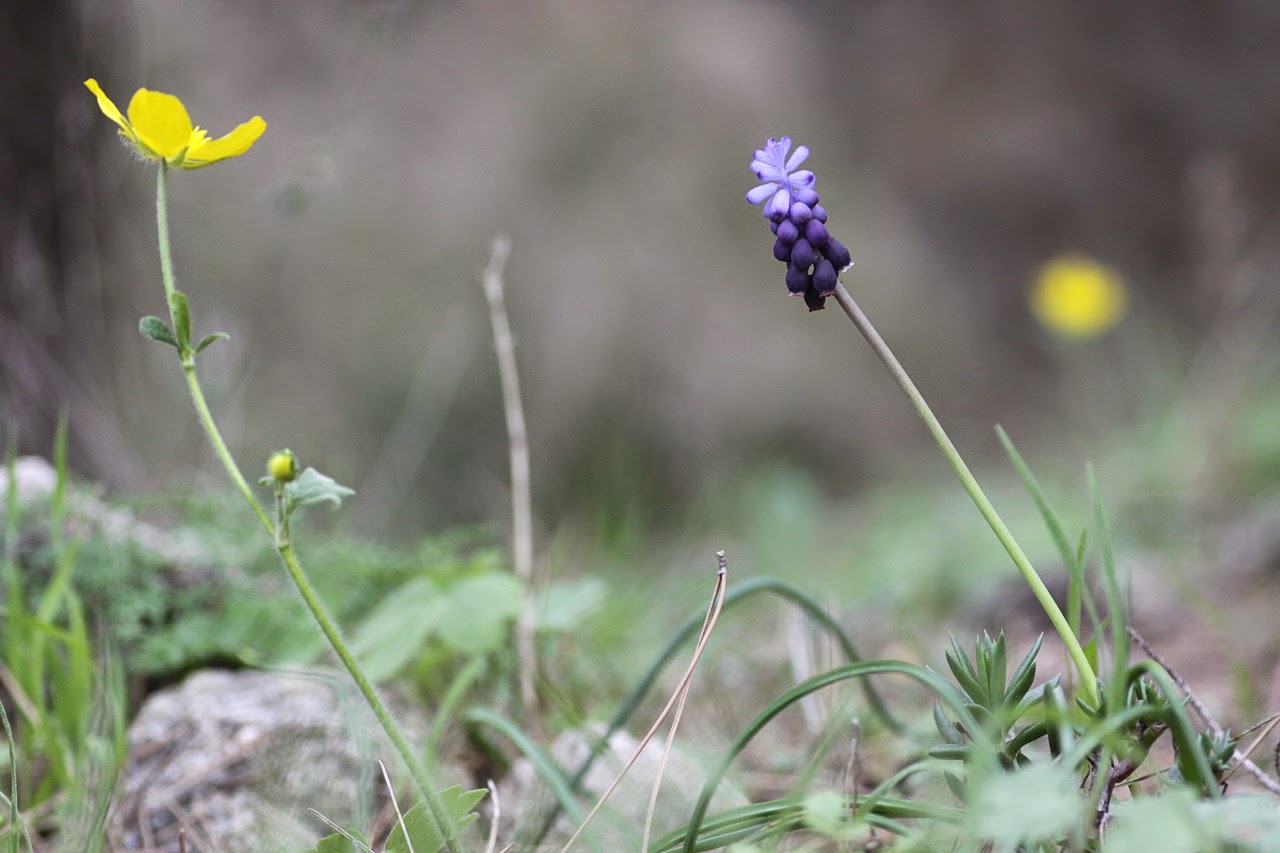 There were more gone-over daffodils on an outcrop with a view down to the reservoir in the gorge below.  Here I identified a grape hyacinth as Muscari atlanticum, but I might not have been right to do so. 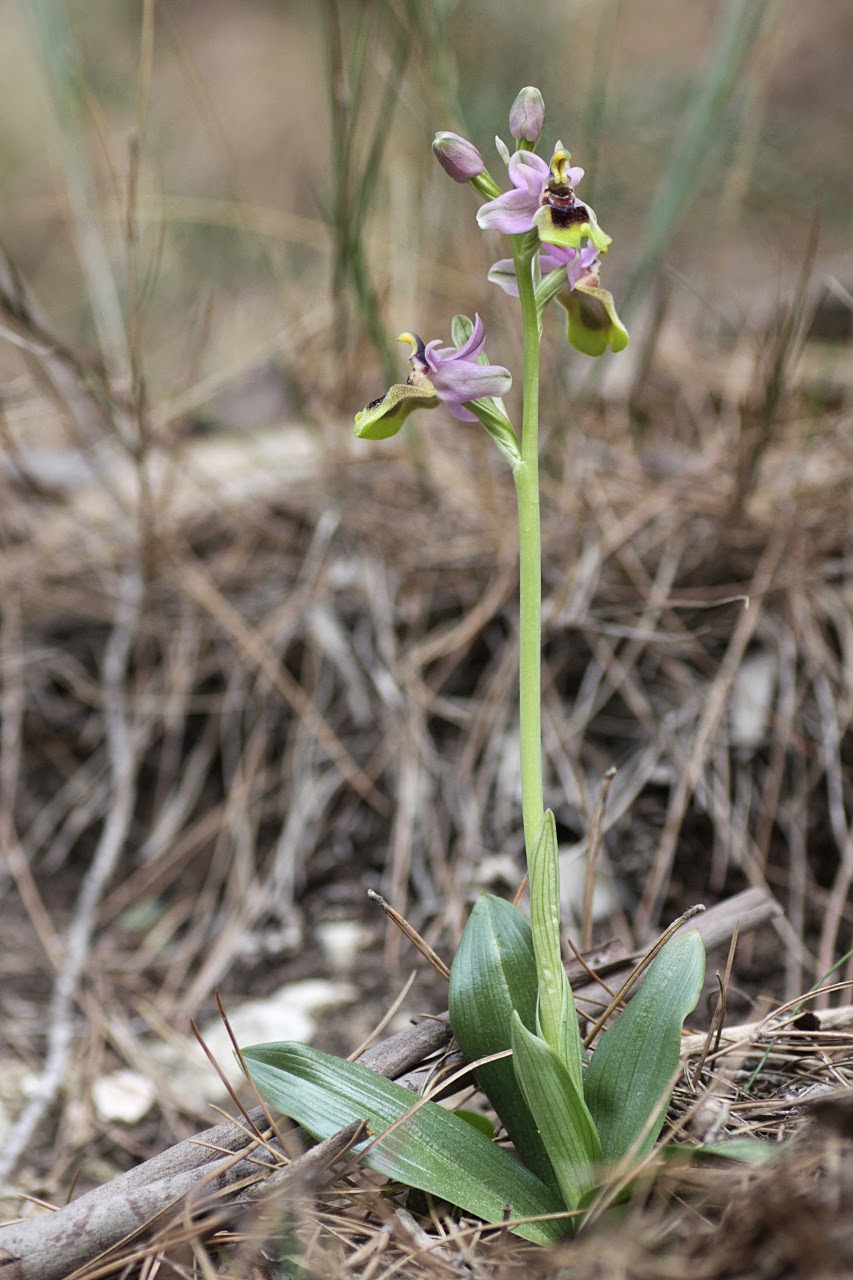 Down by the reservoir I found my second Ophrys, a Sawfly Orchid Ophrys tenthredinifera.  The Ophrys orchids are some of my favourite plants from anywhere, but I will save going on about them for another day.  Instead I will end on a surprising candidate for a floral beauty contest, a crucifer. 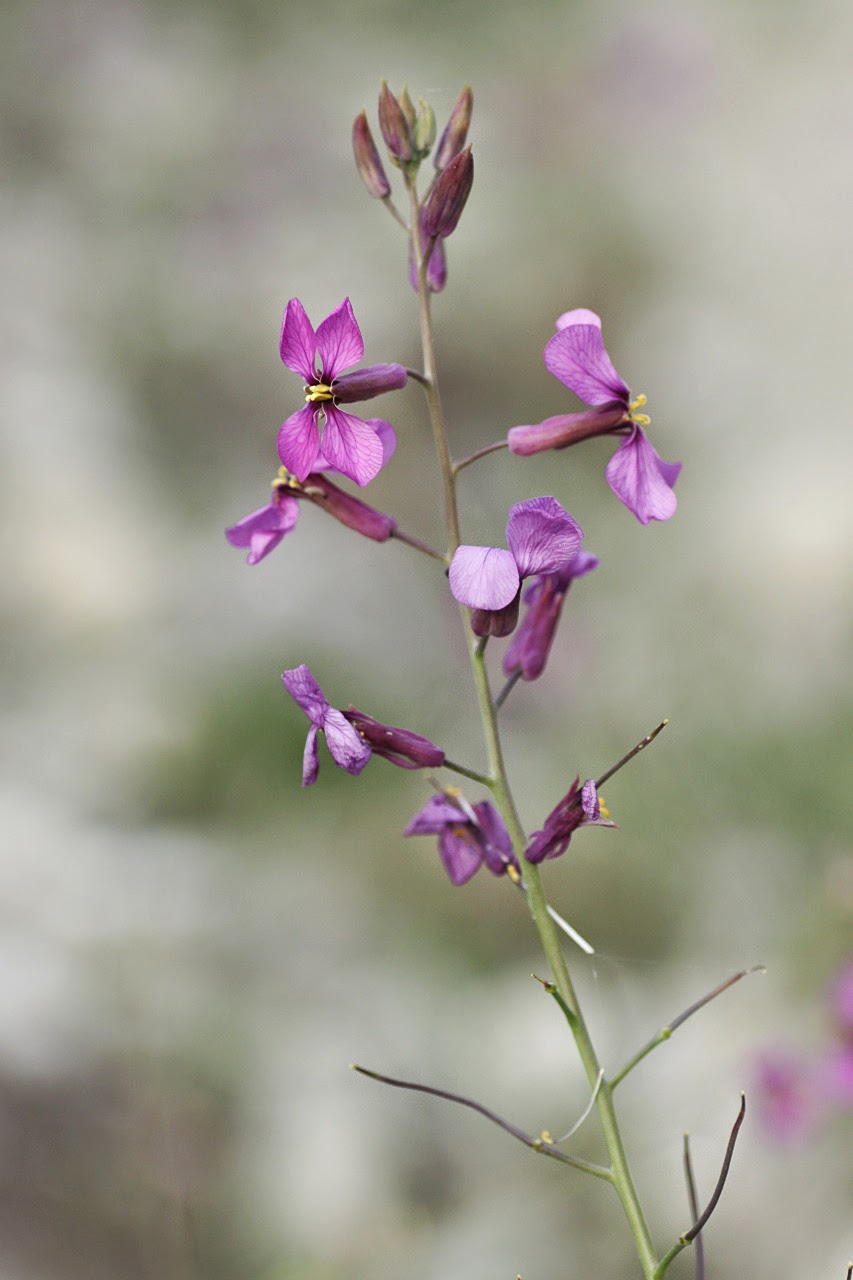 Moricandia is common along the roads I have been driving today.  The flowers are a purple-pink unlike any other crucifer I know, and they are really set off by the dark, almost black centre with its contrasting bright golden anthers. 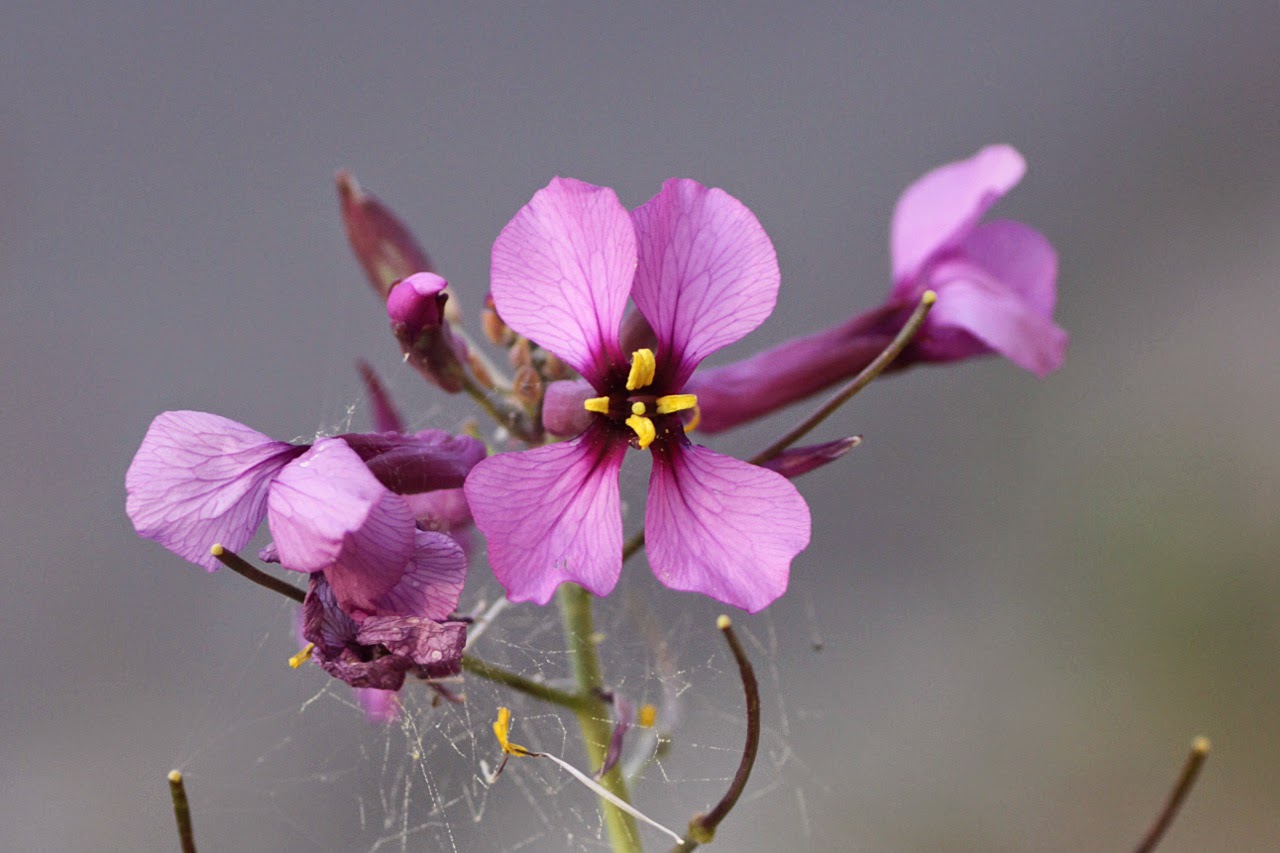