And now for something completely different.  A drive back down to the lowlands to Laguna Fuente de Piedra, a large, saline lake with a colony of tens of thousands of flamingos.

We'll get to that in a minute, but first a walk around the shallow pools near the visitor centre.  They were alive with waders: plenty of noisy Black-winged Stilts, a party of Little Stints, a Ruff, two Curlew Sandpipers, Redshanks, a Spotted Redshank, two Snipe, Green, Wood, and Common Sandpipers, Little Ringed Plovers, Dunlin, and a Black-tailed Godwit.  It was like a very good day at Titchwell, but with more Corn Buntings and no sea.  And different coloured Yellow Wagtails (iberiae and flava).  Also noticeable was the abundance of Shovelers, calling and chasing each other as I suppose they do at this time of year. 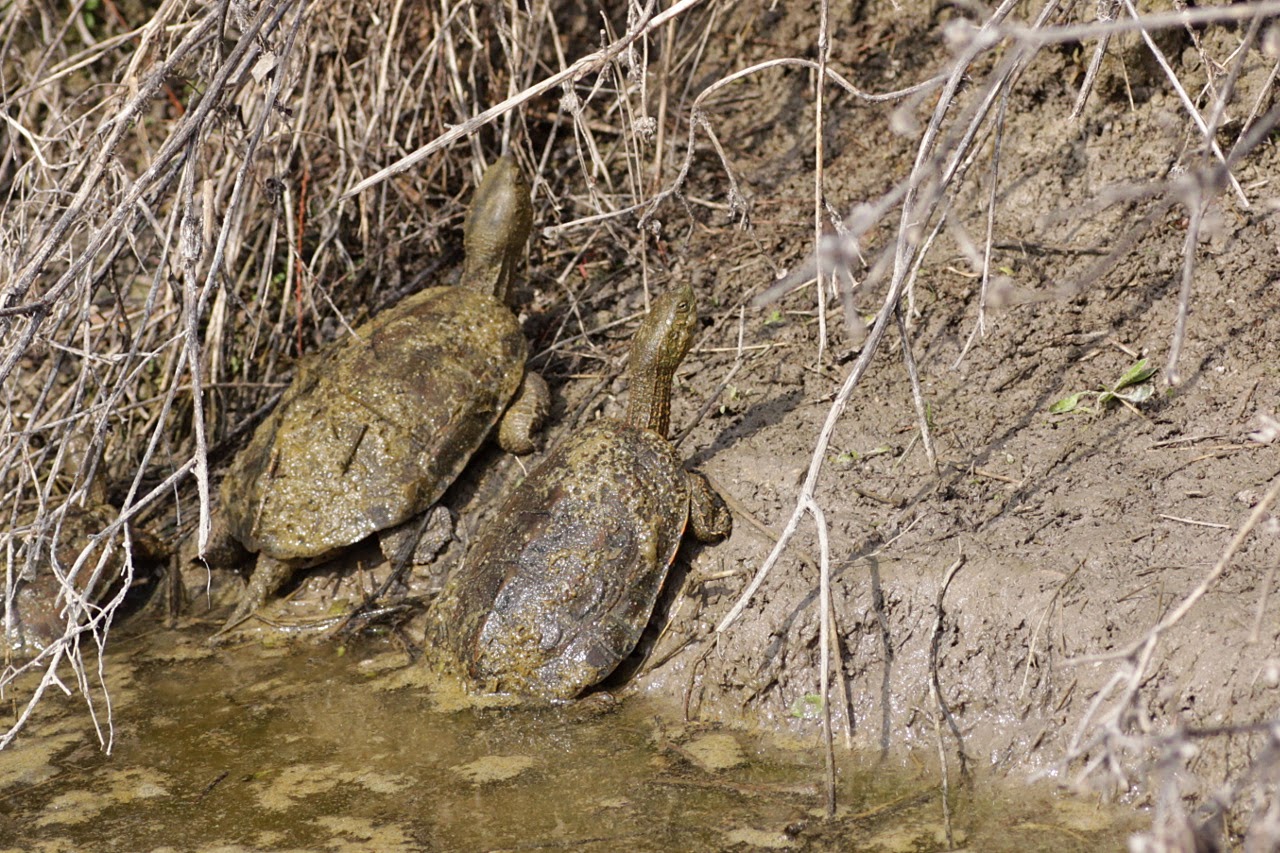 Stripe-necked Terrapins Mauremys leprosai were basking on banks of the ditches, another reminder that I was no longer on a cold cloudy island with an impoverished vertebrate fauna. 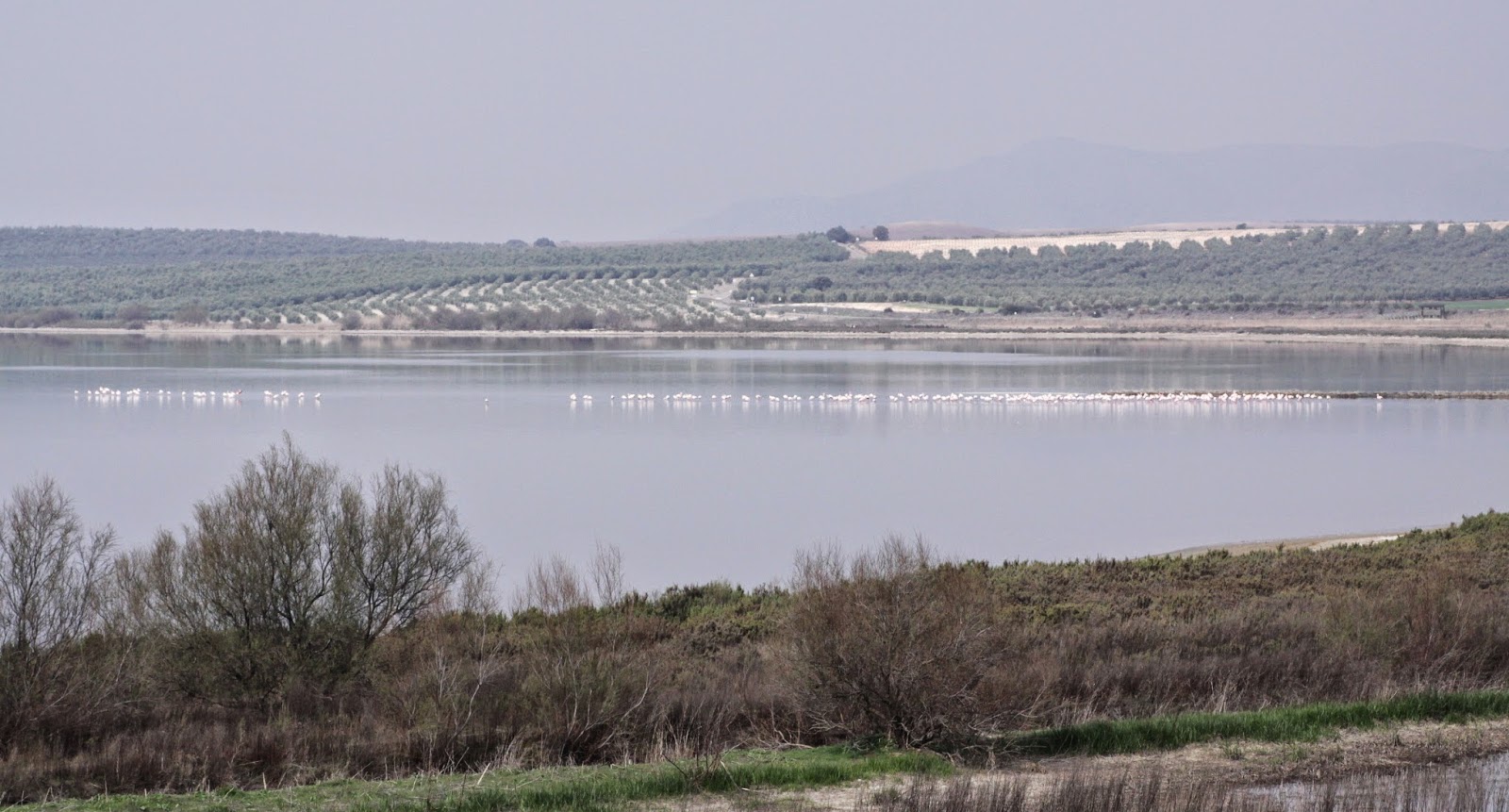 From the visitor centre I looked out over the laguna at distant pink blobs everywhere.  Sometimes the lake dries out and the flamingos desert, but this year numbers were high again.  Among the line of flamingos closer to the centre there was one darker, crimson-pink blob with a dark bill: one of the Lesser Flamingos that have joined in with the Greaters and started breeding.  These are either wanderers from the colonies south of the Sahara in Africa or throw-outs from somebody's collection; we'll probably never know which. 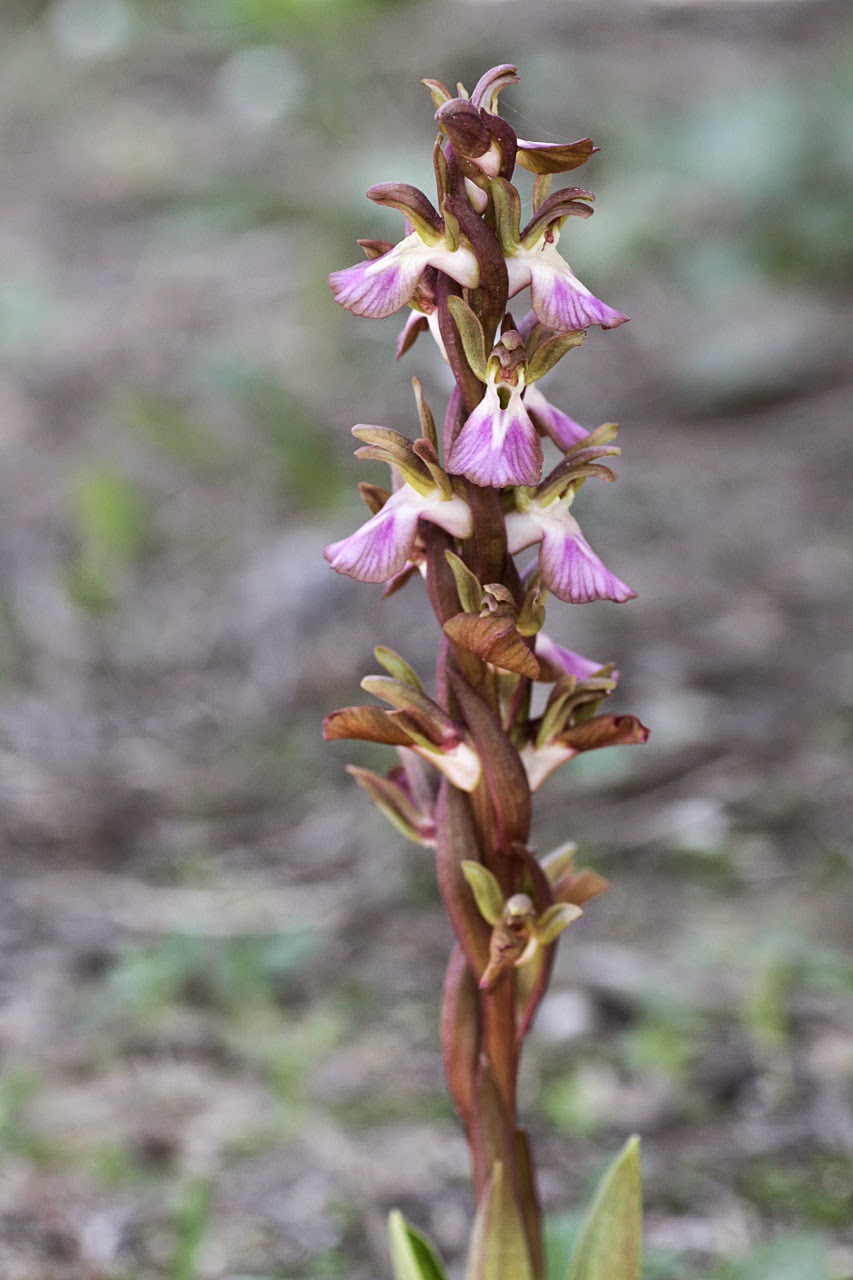 This morning was about the birds, but as I was leaving the car park I was pleased to see a new orchid.  Orchis collina has purple-stencilled lips and a tight spike of flowers on a stem heavily washed with a dark red tint.  I looked at other lakes nearby and was rewarded with a dozen White-headed Ducks on La Ratosa; Kentish Plovers, and Avocets on La Castañuela; and about 70 Red-crested Pochards and 20 Black-necked Grebes on Laguna Dulce. 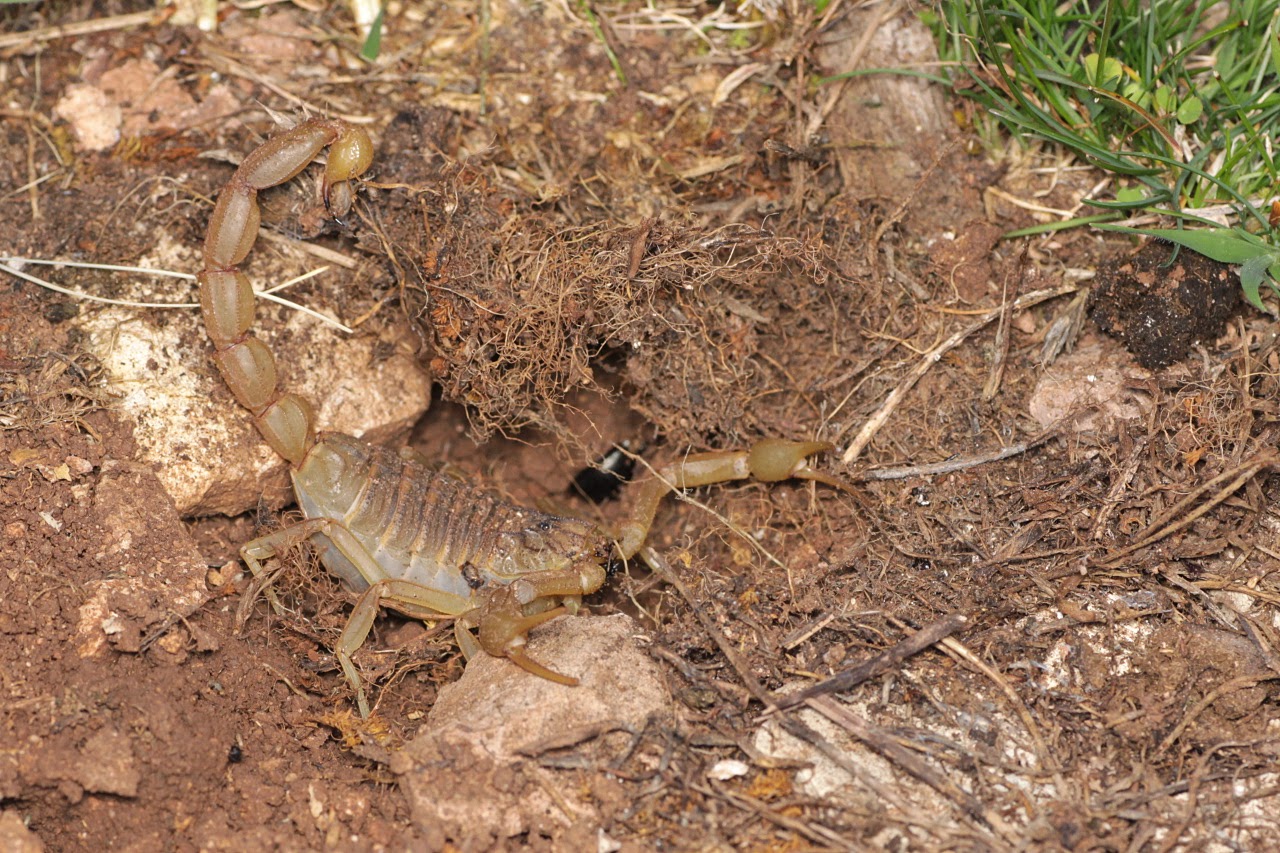 In the afternoon I took a detour on the way home to look around the other side of Sierra de las Nieves.  As usual, the road went through some pleasant countryside, but there were not many stopping places.  I found one, a track through an open pine wood to a farmhouse, where there were lots of stones to turn over on the grassland.  One of them had a rather annoyed scorpion under it.  Actually, it probably had a quite content scorpion under it until I lifted it up.  This is one of the Buthus species, recently found to comprise several species in southern Spain.  It thought it imprudent to try to get get close enough to see the salient identification features of this one. 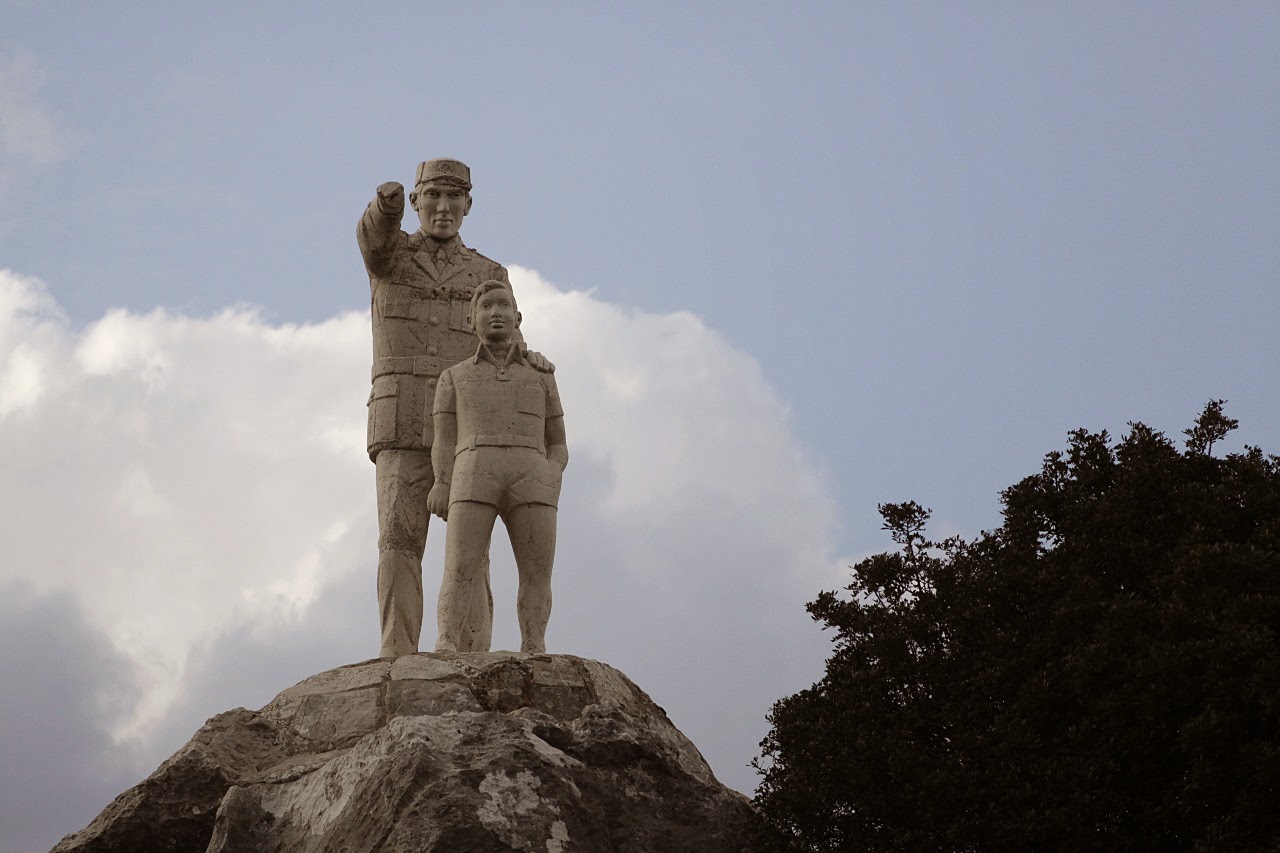 Beyond El Burgo there is is an official place to stop at the Guarda Forestal monument.  As well as a fine view, there is a statue of a forest guard who was once pointing to something in the distance (probably a Spanish Ibex: there was a another panel here telling me that this is their home, and there was another absence of ibexes).  Unfortunately the guard has lost his hand and now appears to be adopting a Kitcheneresque pose, pointing rather sternly at anyone who looks at him rather than out at the forest he is watching over. 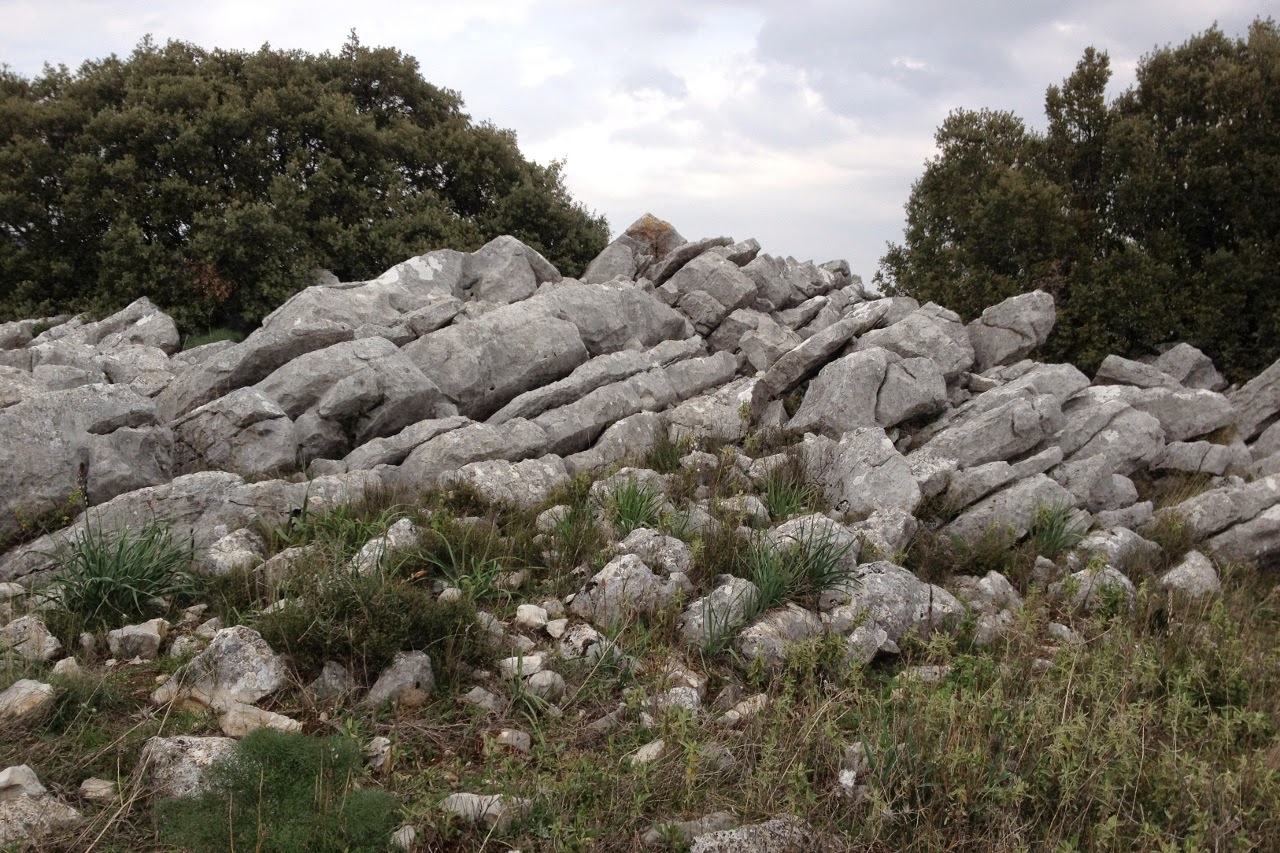 The monument in on a limestone mound, and there were plenty of things to see in the crevices between the rocks. 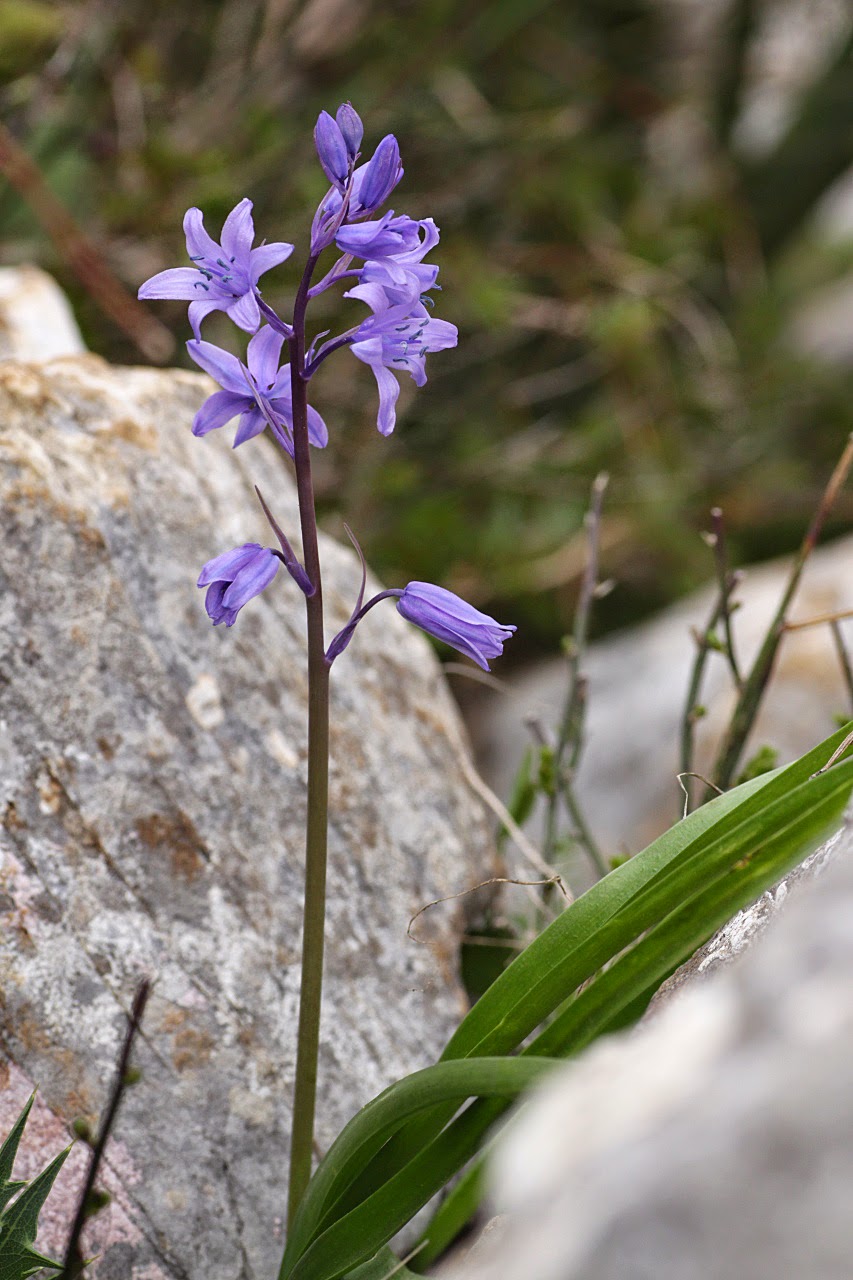 I'll start with another Spanish Bluebell Hyacinthoides hispanica.  Like all the bluebells I had seen this week, this did not resemble the plant that is common in British gardens and hybridises with the native Hyacinthoides non-scripta.  The interloper in Britain is a much more robust bluebell with wider leaves, and more flowers on a sturdier spike.  I here add my voice to those who have said that 'Spanish Bluebells' in Britain are not the same as the bluebells that grow wild in southern Spain and Portgual, even though they are both supposedly Hyacinthoides hispanica.  Are the garden bluebells already hybrids, displaying the vigour that can often be found in such plants?  Perhaps they are polyploids, also which are also known for being beefier than their diploid progenitors.  Or is being bigger just what happens to a Spanish Bluebell when you put it in a garden and give it all the fertiliser and water it could want rather than it leaving it to eke out what it can get from a droughted limestone landscape.  Someone should find out. 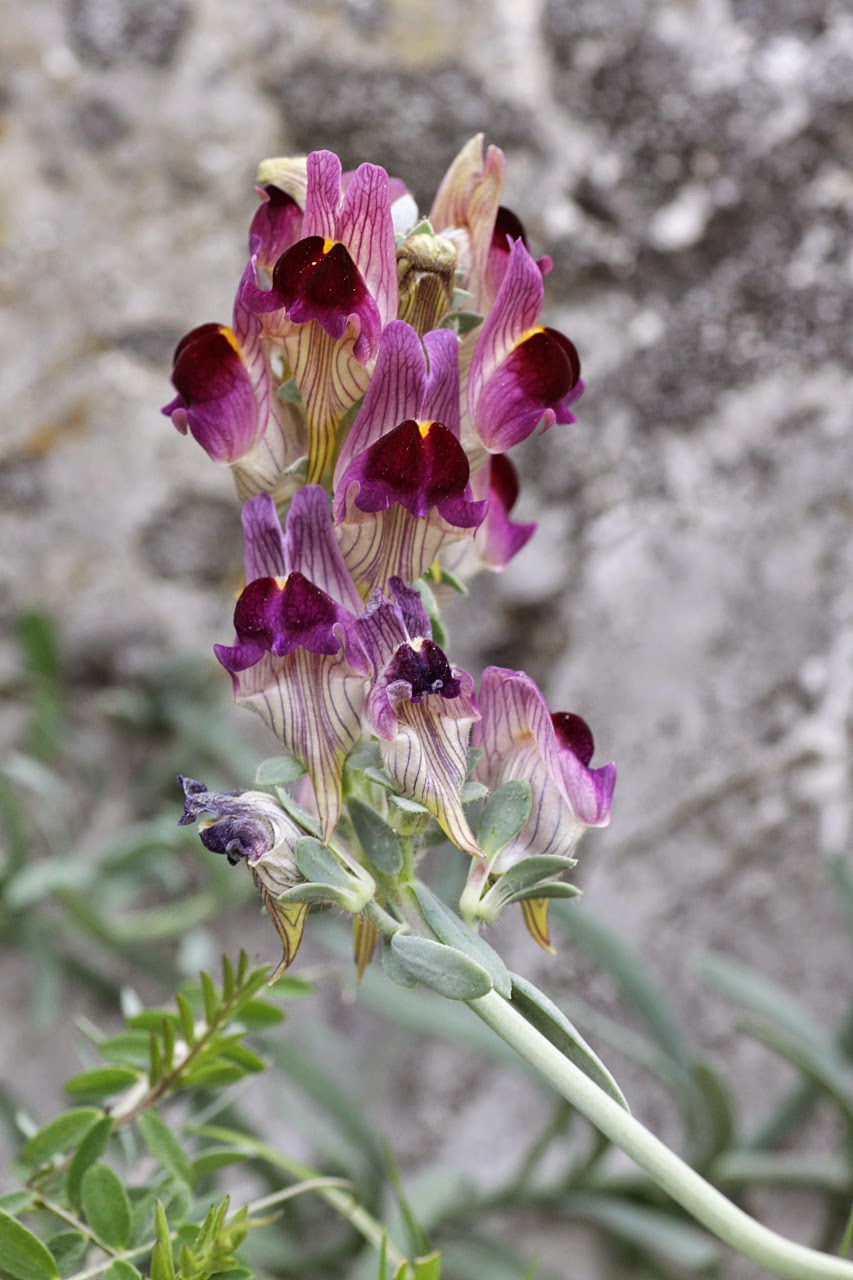 I have seen Linaria aeruginea in many of the places I have visited this week, but not often in flower somewhere accessible.  Here it was blooming next to the path, a beautiful velvet-purple, but elsewhere it can be a rather more ordinary yellow. 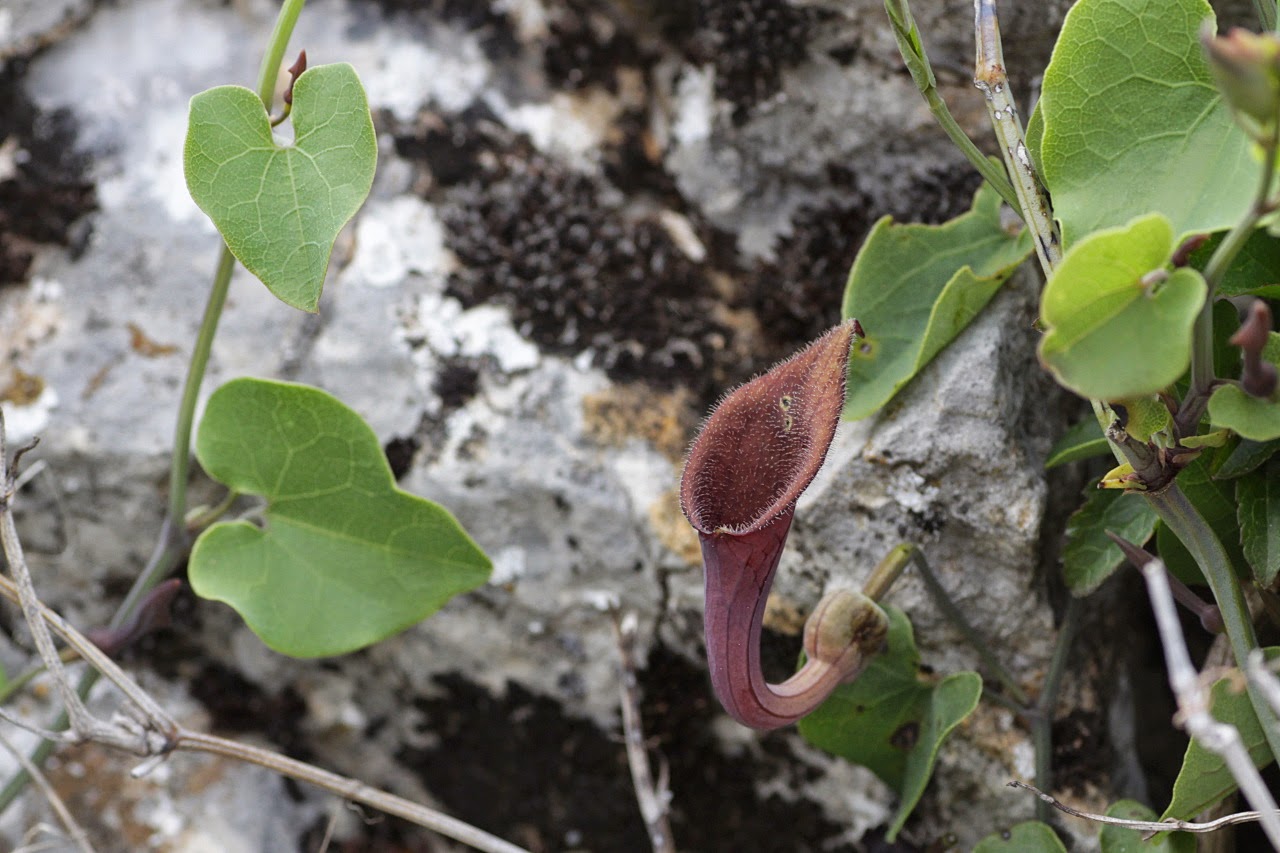 And there was more Aristolochia baetica, with its pitcher-plant like flowers.  Below the path the delicate pallid green petals of Clematis cirrhosa were hanging in the hawthorns like garlands of paper flowers put up for Christmas. 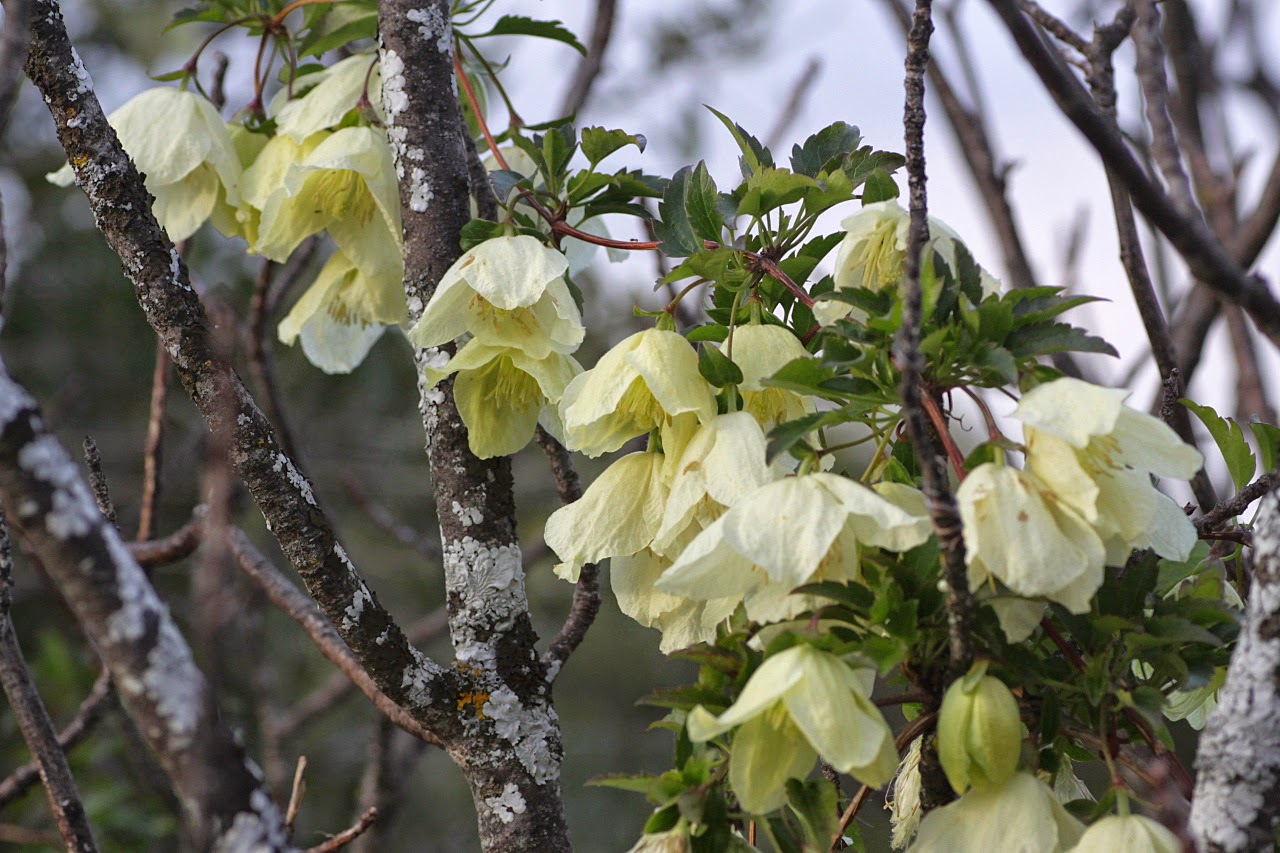 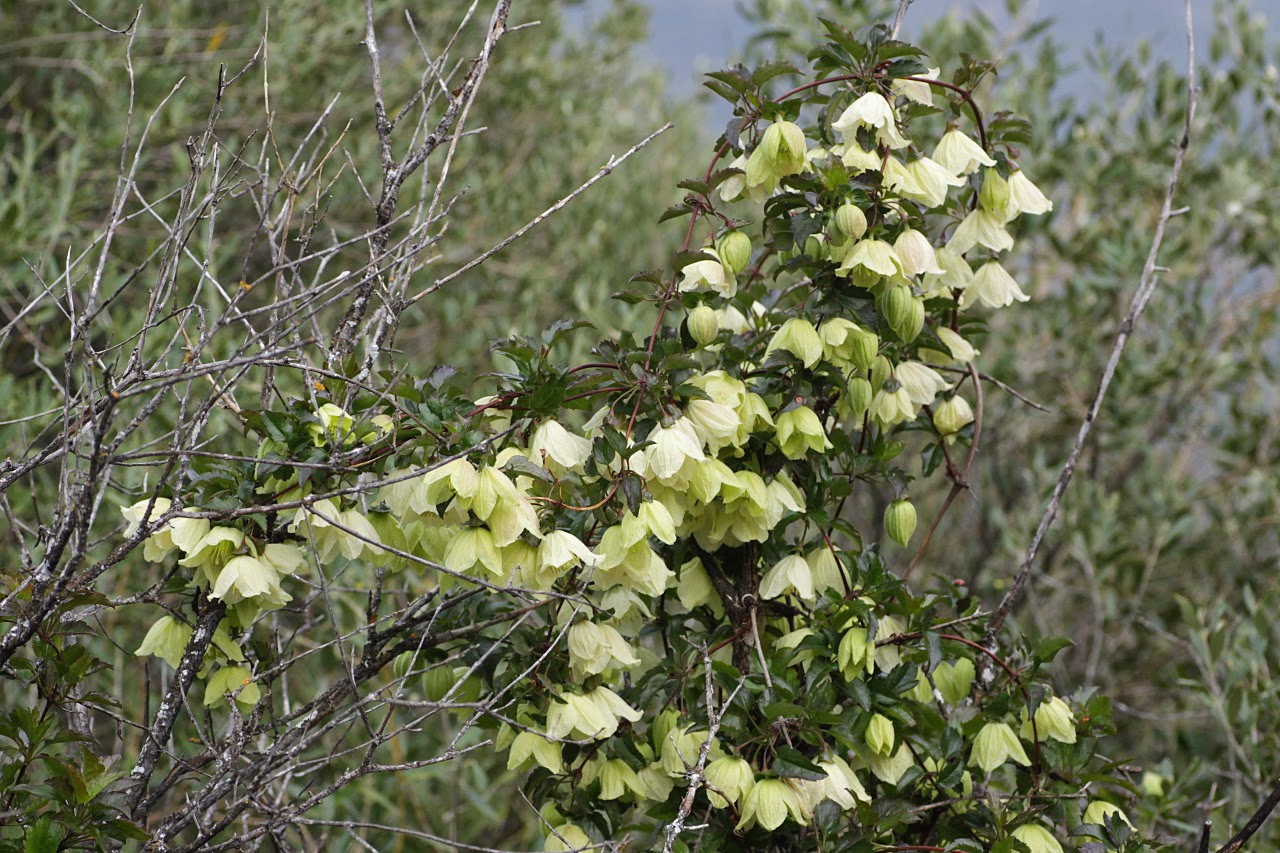 Getting down to the Clematis was a bit of a scramble, but worth the effort becuase on the way back up I noticed a snake resting on the rocks. 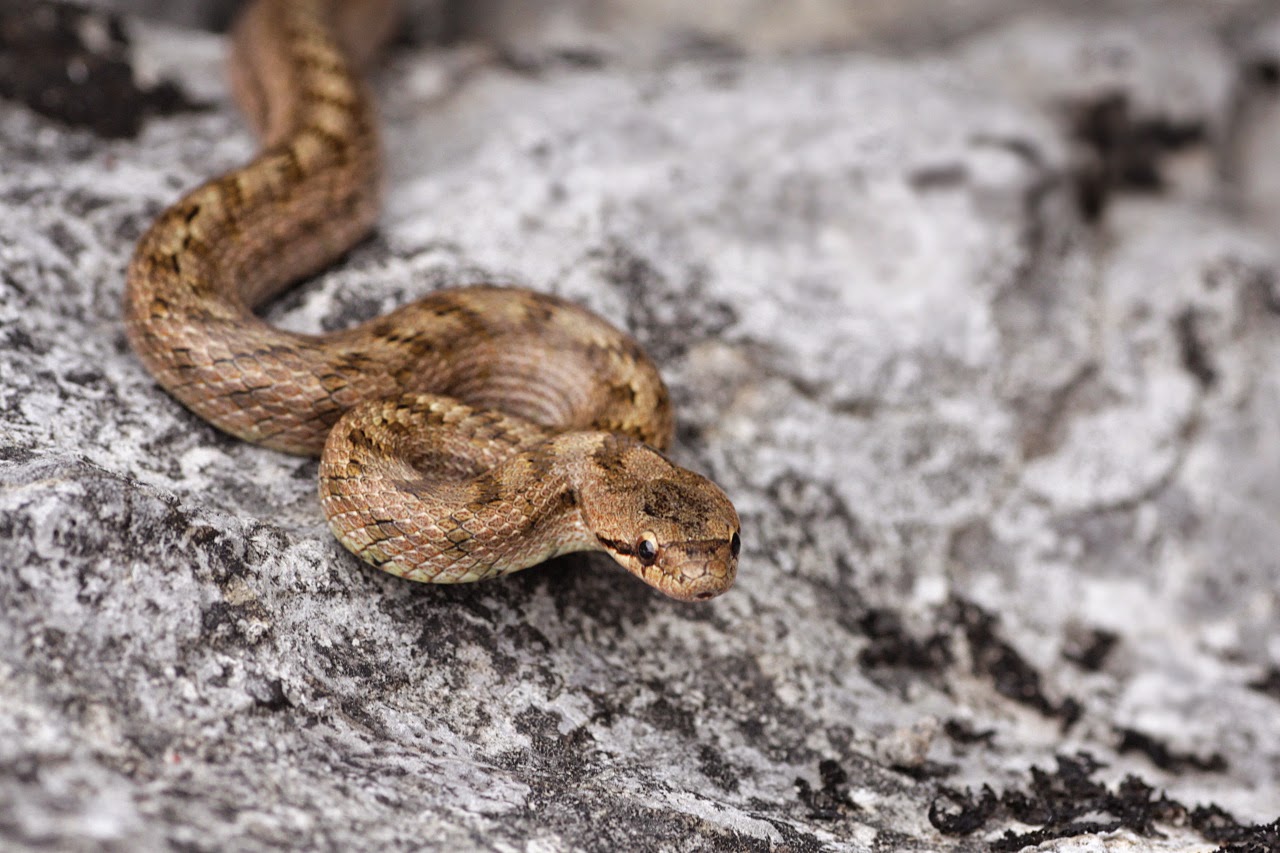 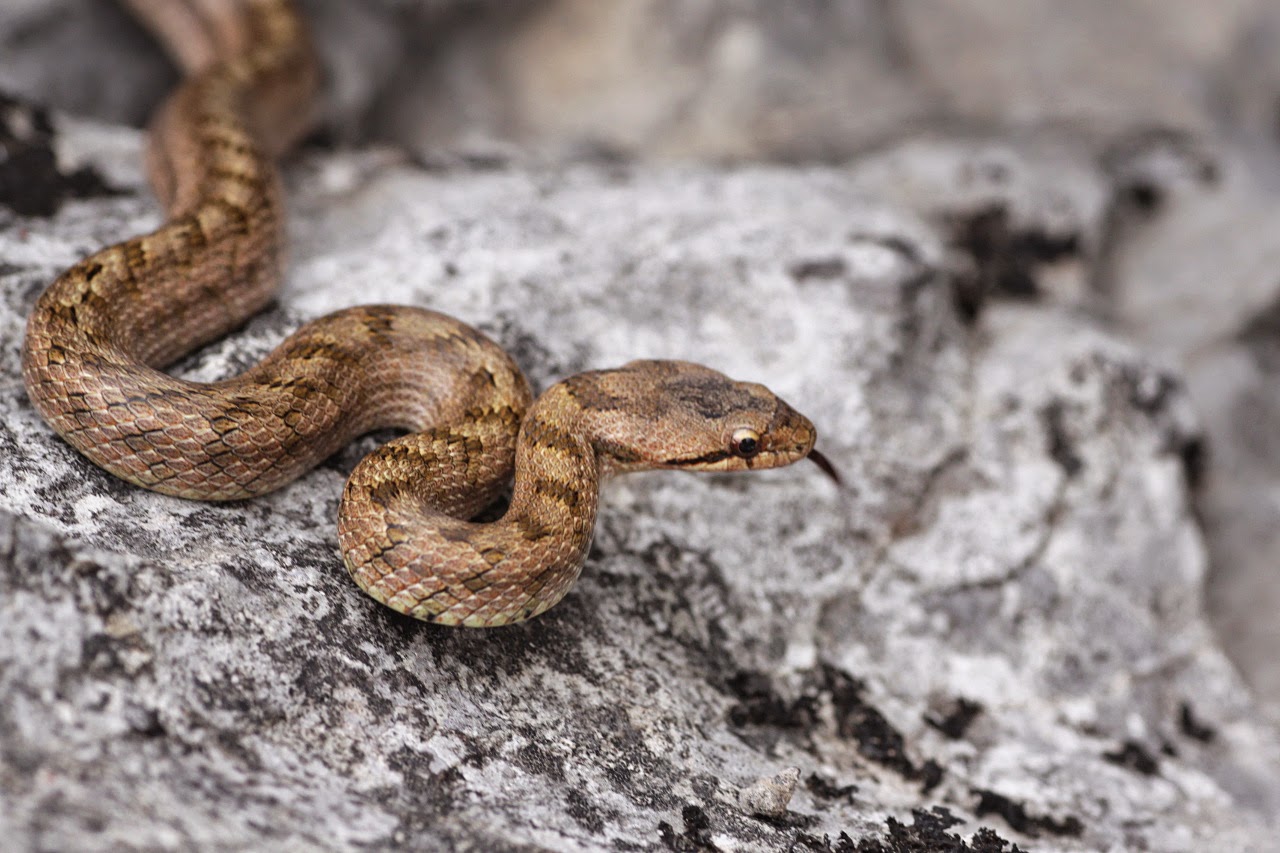 It was evening now, and the sun had dipped below the mountains, leaving the snake too cool to make a quick getaway, so I was able to get some pictures.  The dark stripe linking the eyes, among other things, is characteristic of Southern Smooth Snake Coronella girondica, a slender serpent found in the Western Mediterranean.  Like our Smooth Snake, it feeds mainly on reptiles. 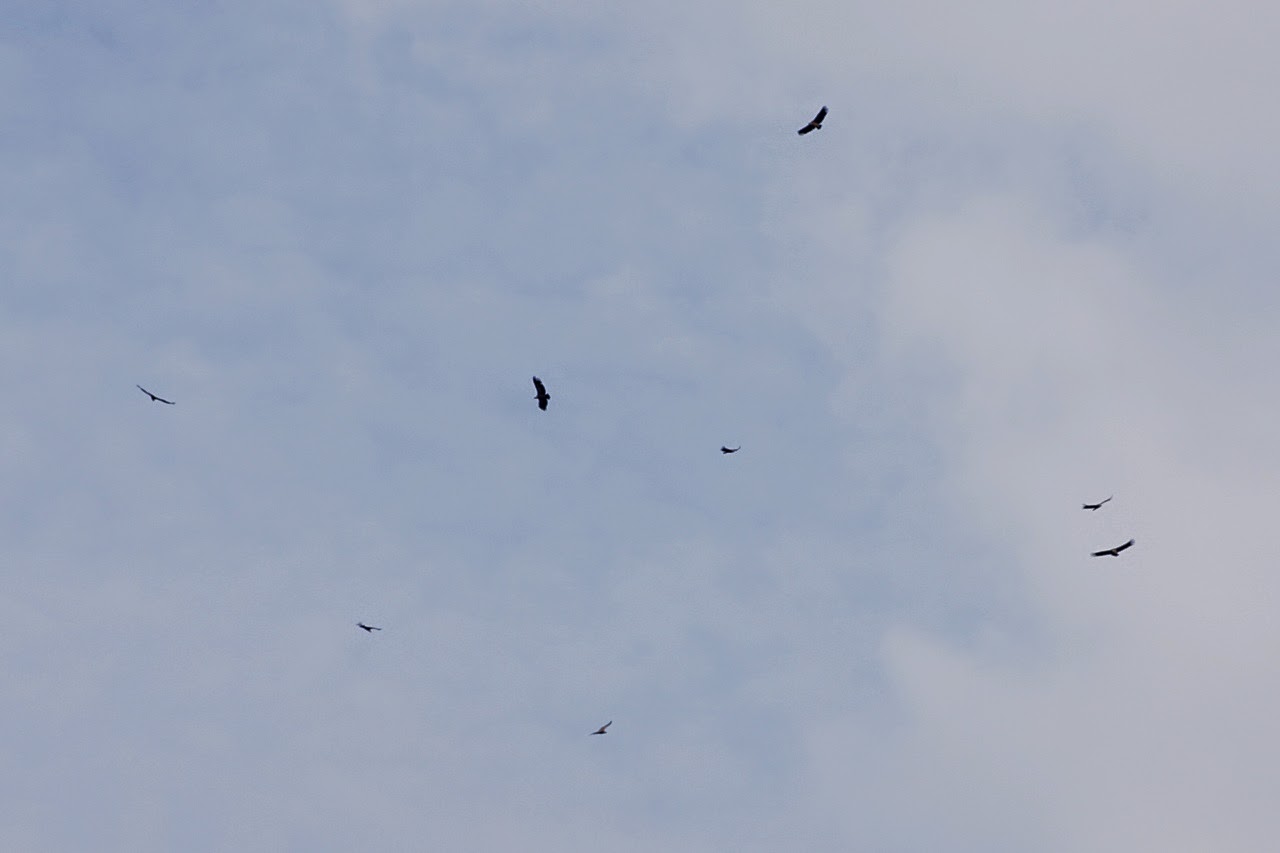 The vultures were circling, but they had been circling almost everywhere almost every time I had been in the mountains, so there was nothing portentous about it. 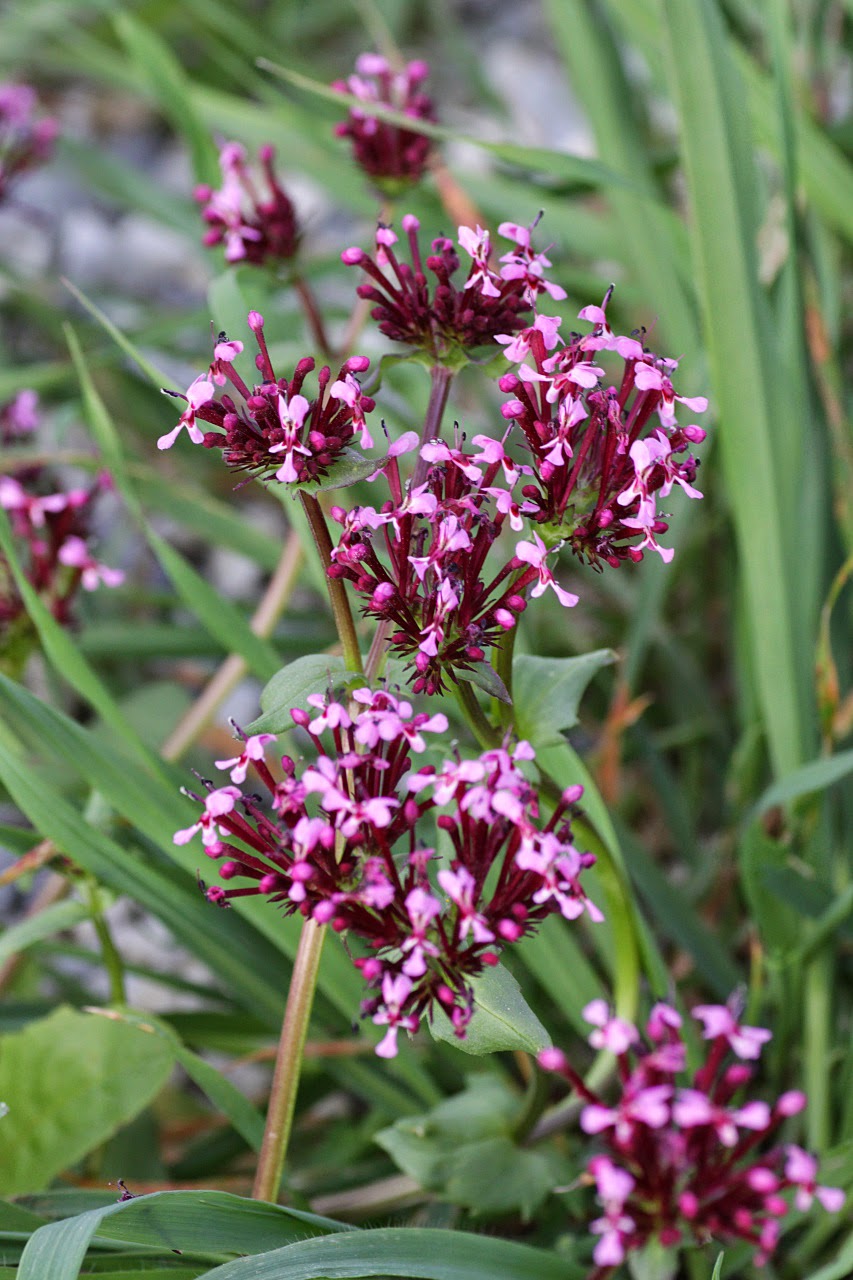 One quick stop to look at Fedia cornucopiae, a strange-looking plant, rather like a scruffy valerian, which, as it is a member of the same family, is exactly what it is. 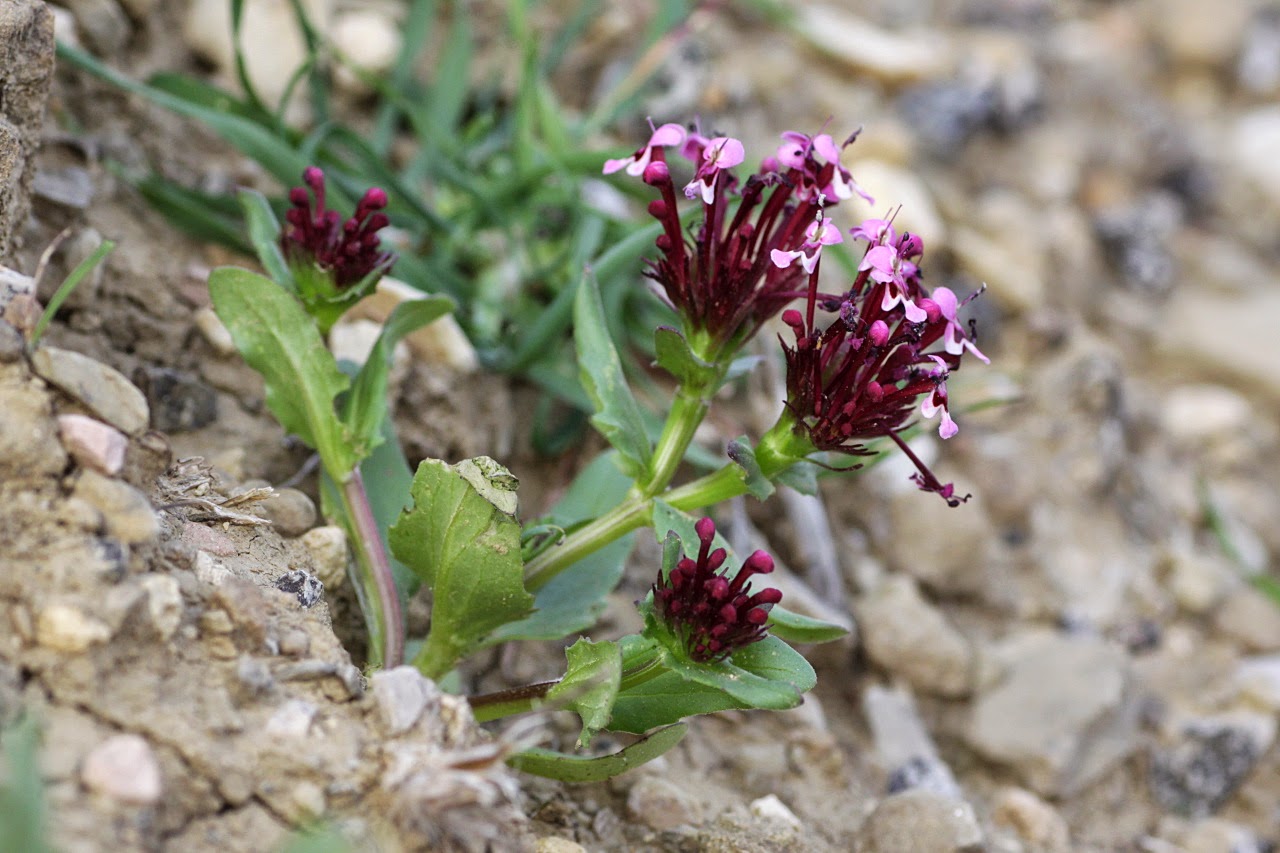